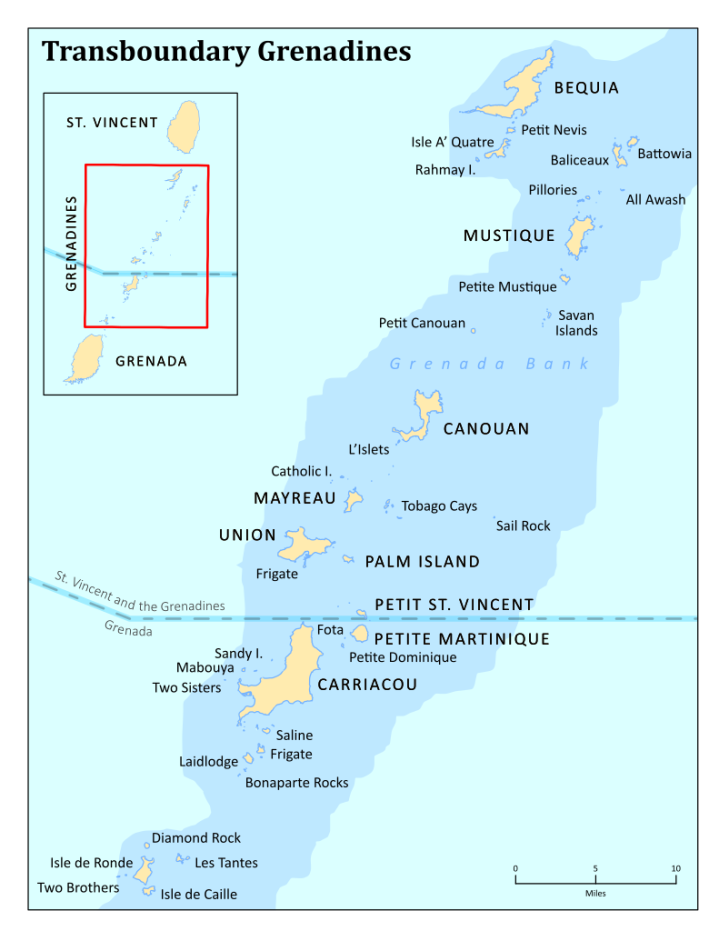 Between 500 and 1000 AD\CE, Amerindians came to Carriacou. These early settlers called the island Kayryouacou, meaning “the land of reefs.”

On September 27, 1650, Jacques du Parquet bought Grenada from the Compagnie des Iles de l’Amerique, which was dissolved, for the equivalent of £1160. In 1656, Jean-Baptiste Du Tertre, a turtle fisherman living in Guadeloupe, visited Carriacou. He was the first recorded French/European person to visit the island. It was colonized first by the French among the European newcomers. In 1657, Jacques du Parquet sold Grenada to the Comte de Cerrillac for the equivalent of £1890. In 1664, King Louis XIV bought out the independent island owners and established the French West India Company. In 1674, the French West India Company was dissolved. Proprietary rule ended in Grenada, which became a French crown colony as a dependency of Martinique.

The first European settler of the island of Petite Martinique was a French fisherman called Mr. Pierre from Martinique. In the early 1700s, Mr. Pierre left his home island of Martinique in search for new fertile lands to plant his crops. The island was owned by him and his wife (‘Madame Pierre’), their children and their slaves. Hence, the largest village was named Madame Pierre after the wife of the French owner. It is thought that he figured that the isle was shaped roughly like Martinique so he named it Petite (little) Martinique.

In 1720, Bartholomew Roberts captured a French ship near Carriacou and commandeered it, renaming it the Royal Fortune. In 1750, the first census of the island was conducted. It recorded 199 people (92 Whites, 92 Blacks and 15 Mixed Race, people of African descent were mostly enslaved) living in Carriacou.

In 1791, Gun Point (Rapid Point), which had been a division of the Grenadines, was made a latitude on the island. The Point belonged to Saint Vincent and the rest of Carriacou belonged to Grenada.

In 1870, Stephen Joseph Perry led a British government expedition to observe a solar eclipse at Carriacou. In the nineteenth century, the Pierrot Mas was first introduced to Carriacou. In 1922, Petite Charles first introduced the Jab Jab (Devil) Mas to the island. The telephone system began operating in 1961 on Carriacou. An airstrip was opened at Lauriston between 1965 and 1968.

Carriacou and Petite Martinique has been a dependency of Grenada since 1974.

A pair of Grenada stamps and a souvenir sheet were issued on December 23, 1973, with the overprint Grenadines. A further overprinted set of 12 stamps was issued on May 29, 1974. The first stamps specifically inscribed Grenada Grenadines was issued on September 17, 1974, utilizing a type of Grenada stamps as did many of the subsequent stamp releases. Starting with Scott #2117-2118, released on June 18, 1999, stamps were inscribed GRENADA / Carriacou & Petite Martinique.

Scott #94 was released on September 30, 1975, as part of a set of ten stamps and two souvenir sheets commemorating the bicentennial of the American Revolutionary War. The 3-cent stamp, measuring 39x25mm and perforated 14, portrays one of American artist John Trumbell’s series of oil paintings entitled “The Death of General Warren at the Battle of Bunker’s Hill” depicting the death of Joseph Warren at the June 17, 1775, Battle of Bunker Hill. Warren, an influential Massachusetts physician and politician, had been commissioned a general but served in the battle as a volunteer private. He was killed during or shortly after the storming of the redoubt atop Breed’s Hill by British troops.

The paintings are iconic images of the American Revolution. Trumbull painted several versions, including the one held by the Museum of Fine Arts, Boston (dated between 1815 and 1831). This was commissioned by the Warren family and passed down through the family before being acquired by the museum. Another, larger version (dated 1834) is held by the Wadsworth Atheneum in Hartford, Connecticut. The central focus of the painting is Warren’s body, dressed in white, and John Small, a British major, dressed in a scarlet uniform (holding a sword in his left hand). Small, who had served with colonial general Israel Putnam during the French and Indian War, is shown preventing a fellow British soldier from bayoneting Warren’s body. On the far right of the painting is a colonial officer, Thomas Grosvenor, with a black man holding a musket behind him. The black man was long thought to be Peter Salem, a freed slave who served in the cause of American independence. Later research instead identified him as a slave belonging to Grosvenor. The foreground is littered with bodies from both sides of the conflict, and the background includes clusters of colonial and British troops carrying flags; Boston Harbor is also visible in the distance. The sky is partially obscured by smoke rising from Charlestown, which had been torched by the British.

The Battle of Bunker Hill was fought on June 17, 1775, during the Siege of Boston in the early stages of the American Revolutionary War. The battle is named after Bunker Hill in Charlestown, Massachusetts, which was peripherally involved in the battle. It was the original objective of both the colonial and British troops, though the majority of combat took place on the adjacent Breed’s Hill.

On June 13, 1775, the leaders of the colonial forces besieging Boston learned that the British were planning to send troops out from the city to fortify the unoccupied hills surrounding the city, which would give them control of Boston Harbor. In response, 1,200 colonial troops under the command of William Prescott stealthily occupied Bunker Hill and Breed’s Hill. During the night, the colonists constructed a strong redoubt on Breed’s Hill, as well as smaller fortified lines across the Charlestown Peninsula. By daybreak of June 17, the British became aware of the presence of colonial forces on the Peninsula and mounted an attack against them that day. Two assaults on the colonial positions were repulsed with significant British casualties; the third and final attack carried the redoubt after the defenders ran out of ammunition. The colonists retreated to Cambridge over Bunker Hill, leaving the British in control of the Peninsula.

The battle was a tactical victory for the British, but it proved to be a sobering experience for them, involving many more casualties than the Americans had incurred, including a large number of officers. The battle had demonstrated that inexperienced militia were able to stand up to regular army troops in battle. Subsequently, the battle discouraged the British from any further frontal attacks against well defended front lines. American casualties were comparatively much fewer, although their losses included General Joseph Warren and Major Andrew McClary, the final casualty of the battle. The battle led the British to adopt a more cautious planning and maneuver execution in future engagements, which was evident in the subsequent New York and New Jersey campaign, and arguably helped rather than hindered the American forces. Their new approach to battle was actually giving the Americans greater opportunity to retreat if defeat was imminent. The costly engagement also convinced the British of the need to hire substantial numbers of foreign mercenaries to bolster their strength in the face of the new and formidable Continental Army.