Ifni (Territorio de Ifni on early postage stamps) was a Spanish province on the Atlantic coast of Morocco, south of Agadir and across from the Canary Islands.  It had a total area of 580 square miles (1,502 km²) and a population of 51,517 in 1964. The main industry was fishing. Ifni was ceded by Morocco to Spain in 1860, but the Spanish did not occupy it until 1934. The largest community, Sidi Ifni, was also the administrative capital for Spanish West Africa. Spain turned Ifni back to Morocco on June 30, 1969. 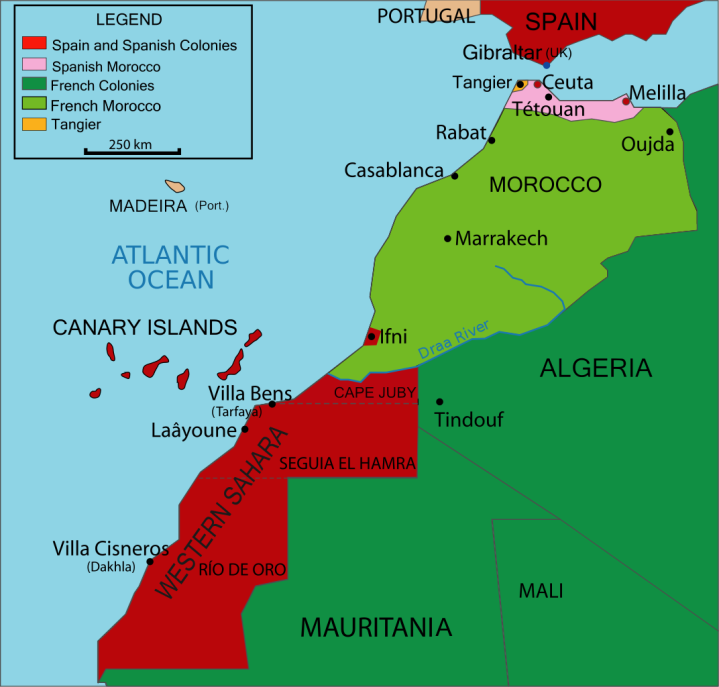 The Ait Baamran tribe has long inhabited the small town and the region surrounding it. They worked in husbandry and traded with Europeans and northern Morocco being intermediaries in the trans-Saharan trade. The first Spaniard arrived in western Africa at the end of the Middle Ages. The very first may have been the Balearic traveler Jaume Ferrer who disappeared in 1375 on the journey off the African coast, or one of the Castilians who landed at Boujdour in 1405 and attacked a caravan there.

In 1476, an enclave in the region of present-day Sidi Ifni was occupied by Spain, which named its settlement there Santa Cruz de la Mar Pequeña (literally “Holy Cross of the Little Sea”). The trading post and fortress was located close to a lagoon (hence its name) not far from Cape Juby. The importance of the settlement was derived from its position in the trans-Saharan slave trade, and captives were shipped to sugar plantations on the Canary Islands.

The Spanish were expelled from the area in 1524 when the settlement was captured by Saadian rulers. After its abandonment, the exact location of Santa Cruz de la Mar Pequeña was forgotten, to the point that when, in 1916, the Spanish gained control of the Cape Juby Strip, which included the location, they assigned it a new name, Puerto Cansado. The place is presently named Foum Agoutir and is near Tarfaya.

Historically, Sidi Ifni is claimed to be the location of Santa Cruz de la Mar Pequeña. Although the existence of the fortress is widely documented, historians could not determine its exact location along the coast between Agadir and Tarfaya.  In the latter part of the nineteenth century, France and Spain laid conflicting claims over the Maghreb (المغرب‎‎ — al-Maɣréb, literally “west, sunset”, previously known to Europeans as the Barbary Coast)  and Spain became interested in its lost medieval fortress in order to claim the southern part of Morocco. For no clear reason Ifni, more than 300 miles north from the real location, was wrongly considered the most likely area. and consequently Sidi Ifni and the territory of Ifni was ceded to Spain by Morocco in the treaty of Wad Ras on April 26, 1860, as result of the Spanish-Moroccan War of 1859.

There was little interest in this colonial acquisition at the time. During the period often termed the “Scramble for Africa” in 1884, Spain acquired what is now Western Sahara (África Occidental Española). Spain occupied Sidi Ifni and Western Sahara jointly, although the latter was formally known under the name Spanish Sahara , or Río de Oro and Saguia el-Hamra. In 1934, the governor-general of Spanish Sahara took up residence in Ifni.

Until 1952, Ifni region had the status of a protectorate. In this year, the region became part of Spanish West Africa, an entity that grouped the colonies of Spanish Sahara and Cape Juby, with its capital defined in Villa Bens — present-day Tarfaya —in Morocco. During Francisco Franco’s dictatorship, the colony was made into a Spanish province in order to forestall United Nations criticism of continued colonization.

After Morocco obtained its independence in 1956, it claimed the territory in various occasions. The first was in August 1957, by stating that the French-Spanish treaty from 1912 had been derogated. By late 1957, serious incidents had occurred in the border, starting the Ifni War (sometimes called the “Forgotten War” — la Guerra Olvidada — in Spain). Ifni garrisons were attacked by the irregular troops led by Moroccan nationalists of the Istiqlal party, and supported tacitly by the king. They called themselves Moroccan Liberation Army.

The Spanish Army retreated from most territory with the purpose of establishing a defensive line limited to Sidi Ifni surroundings. The Moroccan Liberation Army just took control of the abandoned territory. However, this war was never formally declared nor finished. On April 1, 1958, Spain and Morocco signed the Agreements of Angra de Cintra, by which Cape Juby was given to Morocco in June 1958. The lost territories of the Ifni region were never regained. They were integrated into Morocco. At the defensive line in Sidi Ifni, the border was settled and the city remained under Spanish rule as a province of Spain.

Throughout its possession by Spain, Ifni released postage stamps at the rate of about ten per year with the last on November 23, 1968. Most are commonly available and are more often seen unused than used.

On June 30, 1969, mostly due to international pressure, Spain formally returned the territory of Ifni to Morocco. It was integrated into the Moroccan region of Souss-Massa-Drâa (سوس ماسة درعة‎‎) which had its capital at Agadir.

Scott #B24 was released on November 23, 1955, one of three (Scott #77, #B23-B24) issued to mark the annual Colonial Stamp Day. All three feature squirrels with this 15-centavo + 5-centavo surcharge portraying a squirrel holding a nut, printed in olive bister using the photogravure process on unwatermarked paper and perforated 12½x13. I can have never seen any other stamp picturing a squirrel, although I am sure there are others. It isn’t exactly an animal I imagine when thinking about Morocco!

The word “squirrel”, first attested in 1327, comes from the Anglo-Norman esquirel which is from the Old French escurel, the reflex of a Latin word sciurus. This Latin word was borrowed from the Ancient Greek word σκίουρος, skiouros, which means shadow-tailed, referring to the bushy appendage possessed by many of its members. The native Old English word for the squirrel, ācweorna, survived only into Middle English (as aquerne) before being replaced. The Old English word is of Common Germanic origin, cognates of which are still used in other Germanic languages, including the German Eichhörnchen (diminutive of Eichhorn, which is not as frequently used), the Norwegian ikorn/ekorn, the Dutch eekhoorn, the Swedish ekorre and the Danish egern.

Squirrels are members of the family Sciuridae, a family that includes small or medium-size rodents. The squirrel family includes tree squirrels, ground squirrels, chipmunks, marmots (including woodchucks), flying squirrels, and prairie dogs amongst other rodents. Squirrels are indigenous to the Americas, Eurasia, and Africa, and were introduced by humans to Australia.The earliest known squirrels date from the Eocene period and are most closely related to the mountain beaver and to the dormouse among other living rodent families.

Squirrels are generally small animals, ranging in size from the African pygmy squirrel at 2.8-3.9 inches (7–10 centimeters) in length and just 0.35 ounces (10 grams) in weight, to the Laotian giant flying squirrel at 3 feet, 7 inches (1.08 meters) in length and the Alpine marmot, which weighs from 11 to 18 pounds (5 to 8 kilograms). Squirrels typically have slender bodies with bushy tails and large eyes. In general, their fur is soft and silky, although much thicker in some species than others. The color of squirrels is highly variable between — and often even within — species.

In general, the hind limbs are longer than the fore limbs, and they have four or five toes on each paw. Their paws include an often poorly developed thumb, and have soft pads on the undersides. Unlike most mammals, Tree squirrels can descend a tree head-first. They do so by rotating their ankles 180 degrees so the hind paws are backward-pointing and can grip the tree bark.

Squirrels live in almost every habitat from tropical rainforest to semiarid desert, avoiding only the high polar regions and the driest of deserts. They are predominantly herbivorous, subsisting on seeds and nuts, but many will eat insects and even small vertebrates.[8]

As their large eyes indicate, in general squirrels have an excellent sense of vision, which is especially important for tree-dwelling species. They also have very versatile and sturdy claws for grasping and climbing.[9] Many also have a good sense of touch, with vibrissae on their heads and limbs. The teeth of sciurids follow the typical rodent pattern, with large gnawing incisors that grow throughout life, and grinding cheek teeth set back behind a wide gap, or diastema.

Many juvenile squirrels die in the first year of life. Adult squirrels can have a lifespan of 5 to 10 years in the wild. Some can survive 10 to 20 years in captivity.

Squirrels breed once or twice a year and give birth to a varying number of young after three to six weeks, depending on species. The young are born naked, toothless, and blind. In most species of squirrel, only the female looks after the young, which are weaned at around six to ten weeks of age and become sexually mature at the end of their first year. In general, ground-dwelling species are social animals, often living in well-developed colonies, but the tree-dwelling species are more solitary.

Squirrels cannot digest cellulose, so they must rely on foods rich in protein, carbohydrates, and fats. In temperate regions, early spring is the hardest time of year for squirrels, because buried nuts begin to sprout and are no longer available for the squirrel to eat, and new food sources have not become available yet. During these times, squirrels rely heavily on the buds of trees. Squirrels’ diets consist primarily of a wide variety of plants, including nuts, seeds, conifer cones, fruits, fungi, and green vegetation. However, some squirrels also consume meat, especially when faced with hunger. Squirrels have been known to eat insects, eggs, small birds, young snakes, and smaller rodents. Indeed, some tropical species have shifted almost entirely to a diet of insects.