The Grand Duchy of Luxembourg (Großherzogtum Luxemburg in German, Grand-Duché de Luxembourg in French, or Groussherzogtum Lëtzebuerg in Luxembourgish) is one of the smallest countries in Europe, and ranked 179th in size of all the 194 independent countries of the world; the country is about 998 square miles (2,586 square kilometers) in size, and measures 51 miles (82 km) long and 35 miles (57 km) wide. To the east, Luxembourg borders the German Bundesland of Rhineland-Palatinate and Saarland, and, to the south, it borders the French région of Lorraine. The Grand Duchy borders the Belgian Walloon Region, in particular the latter’s provinces of Luxembourg and Liège, part of which comprises the German-speaking Community of Belgium, to the west and to the north respectively.  Its capital, Luxembourg City, is, together with Brussels and Strasbourg, one of the three official capitals of the European Union and the seat of the European Court of Justice, the highest juridical authority in the EU. Its culture, people and languages are highly intertwined with its neighbors, making it essentially a mixture of French and Germanic cultures. The repeated invasions by its neighbor countries, especially in World War II, resulted in the country’s strong will for mediation between France and Germany and led to the foundation of the European Union.

Luxembourg comprises two principal regions: the Oesling in the north as part of the Ardennes massif, and the Gutland (“Good Land”) in the south. It had a population of 524,853 in October 2012, ranking it the eighth least-populous country in Europe. As a representative democracy with a constitutional monarch, it is headed by a Grand Duke, Henri, Grand Duke of Luxembourg, and is the world’s only remaining grand duchy. Luxembourg is a developed country, with an advanced economy and the world’s highest GDP (PPP) per capita, according to the United Nations in 2014. Its central location has historically made it of great strategic importance to numerous powers, dating back to its founding as a Roman fortress, its hosting of a vital Frankish castle during the Early Middle Ages, and its role as a bastion for the Spanish Road between the sixteenth and seventeenth centuries. 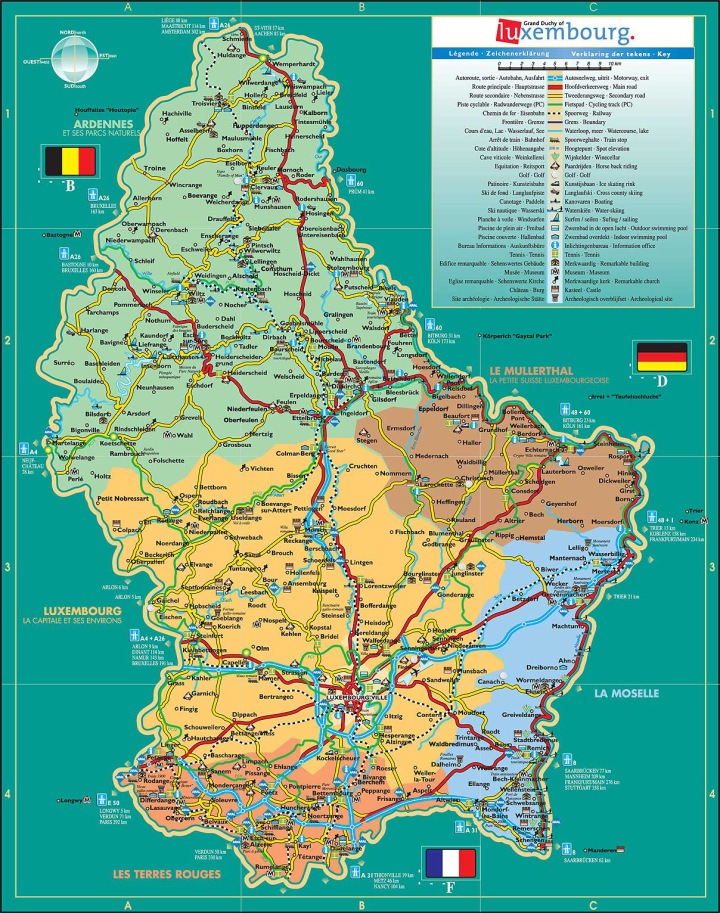 The recorded history of Luxembourg begins with the acquisition of Lucilinburhuc (today Luxembourg Castle) situated on the Bock rock by Siegfried, Count of Ardennes, in 963 through an exchange act with St. Maximin’s Abbey, Trier. Around this fort, a town gradually developed, which became the center of a state of great strategic value.

In the fourteenth and early fifteenth centuries, three members of the House of Luxembourg reigned as Holy Roman Emperors. In 1437, the House of Luxembourg suffered a succession crisis, precipitated by the lack of a male heir to assume the throne, which led to the territories being sold by Duchess Elisabeth to Philip the Good of Burgundy. In the following centuries, Luxembourg’s fortress was steadily enlarged and strengthened by its successive occupants, the Bourbons, Habsburgs, Hohenzollerns and the French.

In 1795, Luxembourg was occupied by French forces and became an occupied departement until 1815. It was integrated into the French postal service, having earlier been served by the Counts of Thurn and Taxis, as Luxembourg was on the route down the Moselle into France.

After the defeat of Napoleon in 1815, Luxembourg was disputed between Prussia and the Netherlands. The Congress of Vienna formed Luxembourg as a Grand Duchy within the German Confederation in personal union with the Netherlands, being at the same time a part of the Netherlands and ruled as one of its provinces, with the Fortress of Luxembourg manned by Prussian troops. This arrangement was revised by the 1839 First Treaty of London, from which date Luxembourg’s full independence is reckoned.

In 1830, following the revolt of the Belgians against Dutch control, Luxembourg joined the German Confederation and was garrisoned by Prussian troops, who brought their own ‘Feldpost’ with them. Pre-adhesive markings distinctive to Luxembourg were used until stamps were issued in 1852.

At the time of the Belgian Revolution of 1830–1839, and by the 1839 Treaty establishing full independence, Luxembourg’s territory was reduced by more than half, as the predominantly francophone western part of the country was transferred to Belgium. In 1842, Luxembourg joined the German Customs Union (Zollverein). This resulted in the opening of the German market, the development of Luxembourg’s steel industry, and expansion of Luxembourg’s railway network from 1855 to 1875, particularly the construction of the Luxembourg-Thionville railway line, with connections from there to the European industrial regions. While Prussian troops still manned the fortress, in 1861, the Passerelle was opened, the first road bridge spanning the Pétrusse river valley, connecting the Ville Haute and the main fortification on the Bock with Luxembourg railway station, opened in 1859, on the then fortified Bourbon plateau to the south.

After the Luxembourg Crisis of 1866 nearly led to war between Prussia and France, the Grand Duchy’s independence and neutrality were again affirmed by the 1867 Second Treaty of London, Prussia’s troops were withdrawn from the Fortress of Luxembourg and its Bock and surrounding fortifications were dismantled.

The King of the Netherlands remained Head of State as Grand Duke of Luxembourg, maintaining a personal union between the two countries until 1890. At the death of William III, the throne of the Netherlands passed to his daughter Wilhelmina, while Luxembourg (then restricted to male heirs by the Nassau Family Pact) passed to Adolph of Nassau-Weilburg.

At the time of the Franco-Prussian war in 1870, despite allegations about French use of the Luxembourg railways for passing soldiers from Metz (then part of France) through the Duchy, and for forwarding provisions to Thionville, Luxembourg’s neutrality was respected by Germany, and neither France nor Germany invaded the country. In 1871, as a result of Germany’s victory over France, Luxembourg’s boundary with Lorraine, containing Metz and Thionville, changed from being a frontier with a part of France to a frontier with territory annexed to the German Empire as Alsace-Lorraine under the Treaty of Frankfurt. This allowed Germany the military advantage of controlling and expanding the railways there.

In August 1914, Imperial Germany violated Luxembourg’s neutrality by invading it in its war against France. This allowed Germany to use the railway lines, while at the same time denying them to France. Nevertheless, despite the German occupation, Luxembourg was allowed to maintain much of its independence and political mechanisms.

In 1940, after the outbreak of World War II, Luxembourg’s neutrality was again violated when the Wehrmacht of Nazi Germany entered the country, “entirely without justification”. In contrast to the First World War, under the German occupation of Luxembourg during World War II, the country was treated as German territory and informally annexed to the adjacent province of the Third Reich. A government in exile based in London supported the Allies, sending a small group of volunteers who participated in the Normandy invasion. Luxembourg was liberated in September 1944, and became a founding member of the United Nations in 1945. Luxembourg’s neutral status under the constitution formally ended in 1948, and in 1949 it became a founding member of NATO.

In 1951, Luxembourg became one of the six founding countries of the European Coal and Steel Community, which in 1957 would become the European Economic Community and in 1993 the European Union, and in 1999 Luxembourg joined the Euro currency area. In 2005, a referendum on the EU treaty establishing a constitution for Europe was held.

Scott #200 was released on August 26, 1936, part of a set of six stamps issued to mark the 11th Congress of the International Federation of Philately. The 10-centime brown stamp was printed by photogravure on granite paper, perforated 11½, and portrays the Cercle Municipal or Cercle-Cité (Municipal Palace) in Luxembourg City, in southern Luxembourg, It is located at the eastern end of the Place d’Armes, in the historic central Ville Haute quarter of the city.

On a site where there had previously been a building intended as a Cercle littéraire but which finally housed a restaurant by the name of Beim Gréitchen, the city decided to construct a grand administrative building. The design competition launched in 1902 was won in 1904 by Pierre and Paul Funck, a father and son team. The administration started to move into the neo-baroque building in 1909 but the official inauguration was in 1910. On the front, above the balcony, is a frieze depicting the granting of the city charter to Luxembourg City in 1244.

The building hosted the Court of Justice of the European Coal and Steel Community, which was established in Luxembourg in 1952, until 1969. It was used as the venue of public hearings of the court until a more permanent venue could be found, whilst other work was conducted at the Villa Vauban, in the Municipal Park.

n 2006, comprehensive renovation and restoration work was carried out on the Cercle in order to transform it into a convention and exhibition center. The work was completed in April 2011 providing not only enhancements to the Grande Salle and the Foyer but also to the cellar, which can now house exhibitions, and the former loft, now the fifth floor, where four rooms form a new conference center. It took on the name Cercle-Cité after an adjacent building on the site of the former Ciné Cité was connected to the Cercle by means of a bridge over the Rue Genistre in order to expand the Cercle’s facilities.