Philately is an endlessly fascinating field; through this hobby of collecting stamps, I am constantly learning new and interesting things. When I started the “A Stamp A Day” blog at the beginning of July 2016. I sought to highlight the people, events, objects, and places portrayed on selected stamps in my own general worldwide collection. This has been organized mainly by the entity (not always an actual nation!) that originally issued the various stamps.

Most collectors do, eventually, obtain scatterings of local and private post “stamps” within purchases of unsorted worldwide mixtures. I believe most stamp collectors keep these along with other labels such as exhibition poster stamps, Christmas seals and the like but don’t include them in their “real” collections. Others, like myself, are fascinated by these “non-stamps” and start separate collections to house them. While a few local posts were organized to provide an actual, needed service where the government-run postal agencies had passed them by for one reason or another (Lundy Island, for example), others were created solely as money-making opportunities to obtain revenue from tourists and collectors. A very small minority have been created in recent years by collectors themselves as a fun extension of the main hobby (such as my own Muang Phuket Local Post).

While catalogues have been produced over the years that contain several of the more “popular” local posts, background information on the vast majority of issuers and their stamps is often difficult at best to obtain. None of these are included in major catalogues such as Scott or Stanley Gibbons. Documentation on the Lundy stamps (and the history of the islands itself) is comparable to any of the major official stamp issuers; it was a bit more challenging to piece together my previous articles about the local posts of Herm Island and the Isle of Jethou, both a part of the British Channel Islands.

Calf of Man (Yn Cholloo in Manx), is a 618-acre (250-hectare, almost one square mile) island off the southwest coast of the Isle of Man. It is separated from the Isle of Man by a narrow stretch of water called the Calf Sound. Like the nearby rocky islets of Chicken Rock and Kitterland, it is part of the parish of Rushen. It is inhabited by only two wardens, who are resident from March to November.. The word ‘calf‘ derives from the Old Norse word kalfr which means a small island lying near a larger one. It is possible to reach the Calf of Man by boat from both Port Erin and Port St Mary. Cow Harbour and South Harbour are the main landing places. The highest part of the island is in the west where an unnamed peak reaches 415 feet (128 meters) above sea level. 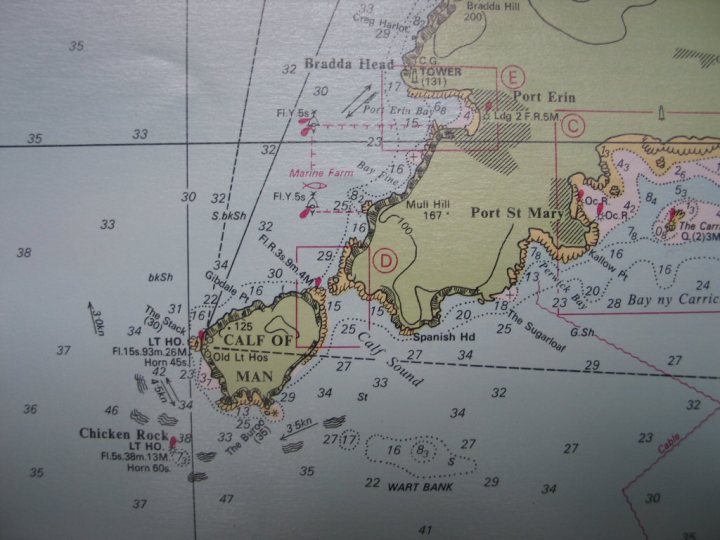 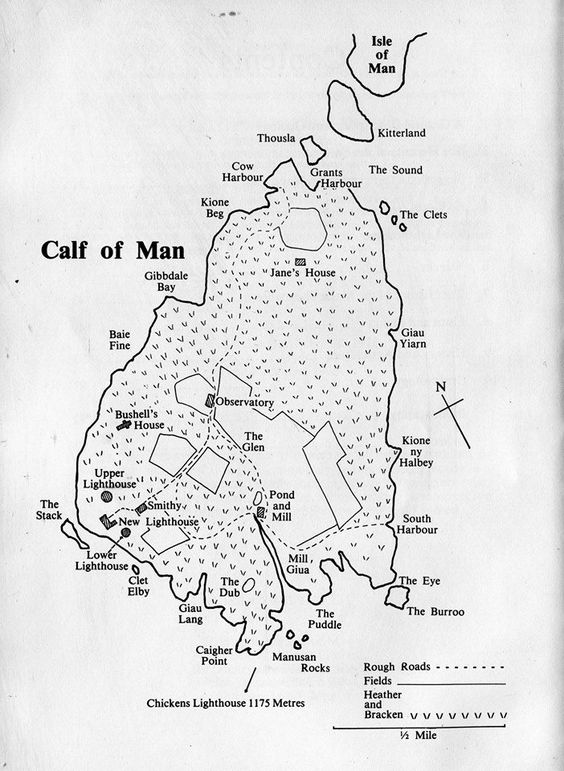 Before the Battle of Clontarf in 1104, two viking ships lay in a sound off the Isle of Man. Their crews were terrified for three nights by noises made by ravens. Naturalists know these must have been Manx shearwaters, which bred in thousands on the Calf of Man for centuries, if not millennia, until they were over-exploited in modern times. They are extremely noisy at night, and their close relative Audubon’s shearwater gained a similar notoriety in the West Indies around 1600 when Spanish sailors thought the Devil was calling to them.

In 1292, Edward I of England as the Lord of Mann at the time, gave permission to the Earl of Buhan to mine lead on the Calf of Man to roof eight turrets of his castle at Crigelton and Gallowaye in Scotland.

The Manorial Roll of the Lord of Mann for 1511 lists Le Calf in Norman French. At that time the Calf was in the possession of the Stevenson family of Balladoole. In 1648, this family was obliged to give up the Calf to the Lord of Mann who feared that it might be invaded by the Parliamentarian forces in the English Civil War. As compensation for the loss of the Calf, the Stevenson family was to receive annually 500 puffins (Fratercula arctica), or sea parrots as they were commonly called. These seabirds nested in burrows in the ground and were considered a table delicacy. Later, the Lord’s small fleet of ships did in fact successfully beat off an attack on the Calf by three English Parliamentarian naval vessels.

In 1776, John Quayle held the tenancy of the Calf which he stocked with deer and other game for hunting purposes. At about this period, and during his tenancy, his workmen were taking stone from the ruins of an ancient keeill, or early Celtic chapel, to use as building material. A remarkable discovery was made. This was a portion of a decorated panel, possibly from an altar front, carved on a slab of slate. It dates from about the first half of the ninth century and has been described as an outstanding example of Celtic art. For fineness and delicacy of workmanship in stone at that early period it is unequaled. It is typically Byzantine in style and serves as an example of the artistic influence which the eastern Mediterranean Church had on the Celtic Church at that time. Similar work on bronze plates and in other metal is to be found in Ireland.

The carving depicts the crucifixion of Christ whose clothed figure is flanked on the left hand side by a Roman soldier with a spear. On the missing right hand portion of the slab would have been another soldier with a sponge of vinegar as related in the Gospels. The surviving portion of the slab measures about 26 inches by ten inches. (660 x 250 mm). It is displayed in the Manx Museum at Douglas. 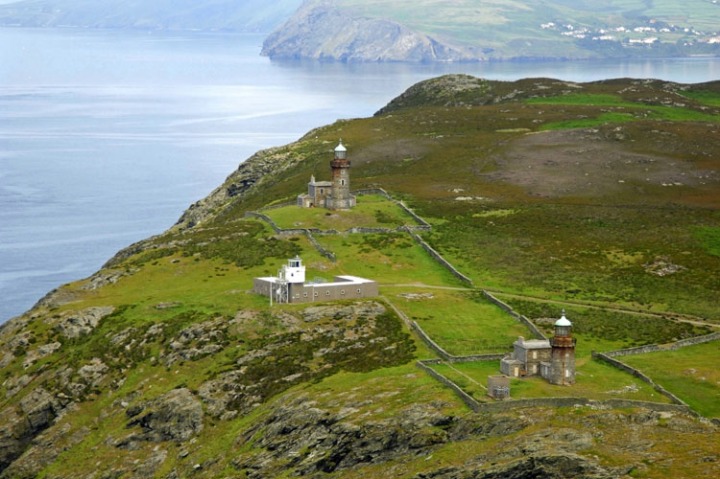 Between the Isle of Man and the Calf is the islet of Kitterland, while the islets of Yn Burroo and The Stack lie close to the Calf’s shore. The southern shore of the island encloses a small bay called The Puddle. Almost a mile southwest of the Calf is Chicken Rock, the most southerly part of the Isle of Man’s territory. 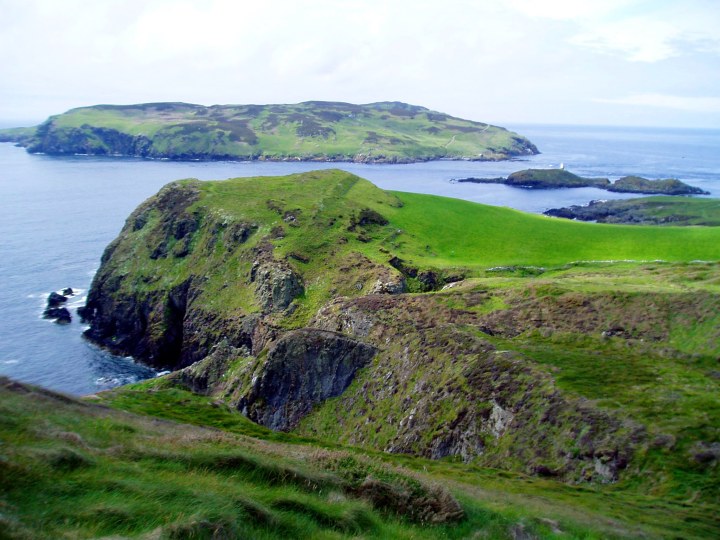 Calf of Man is home to a breeding population of Manx shearwaters, a seabird which derives its name from its presence in Manx waters. The Calf of Man also has a large colony of seals which live and breed on the rocky coastline.

It’s an essential destination for birdwatchers, being home to a number of seabird colonies and on the migratory routes of thousands of species. It is possible to book a short stay on the island’s farmhouse through Manx National Heritage. Day trips also run throughout the summer from Port St. Mary and Port Erin.

Calf of Man local post stamps first appeared  in 1962 designed to cover postage from the island to Port St. Mary on the Isle of Man as no regular postal service was available. They are listed in the Catalogue of British Local Stamps edited by Gerald Rosen, which was first published in 1970. According to SilverDalen Stamps — an excellent online resource about several local posts — “little is known about the production of these stamps, except the facts that are stated in the [catalogue]. The stamps were closely associated with Mr. Rosen.” The stamps were printed until 1973 when the Isle of Man became postaly independent and the Calf stamp issues were suppressed. A total of 376 stamps were released in just over 10 years. They were basically philatelic items and still attract many collectors. 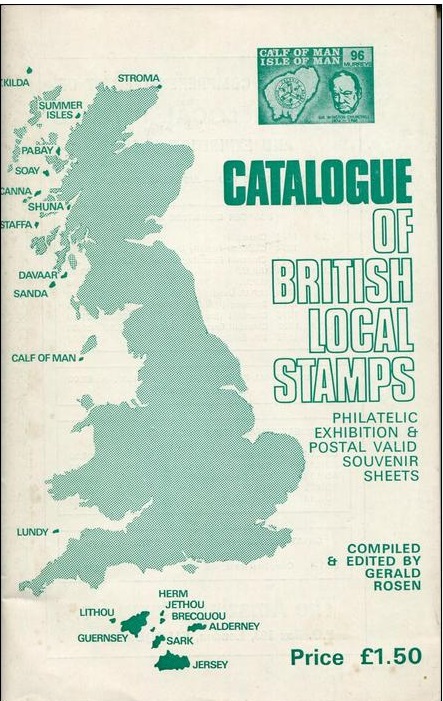 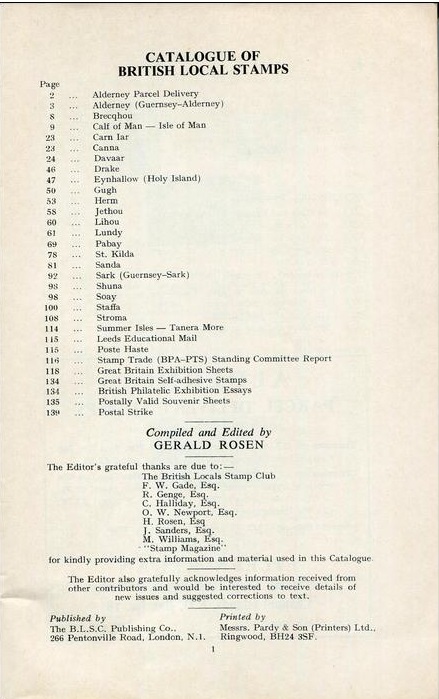 I don’t (yet) have a copy of the Rosen catalogue but the sole Calf of Man stamp currently in my local post collection seems to be Rosen #CA33, described on the Avion Thematics website as “1966 Birds perf def set of 6 (changed colours) unmounted mint (Rosen CA30-35).” The 6-murreys stamp with purple frame and photogravure center portrays the European shag (Phalacrocorax aristotelis), a species of cormorant. It breeds around the rocky coasts of western and southern Europe, southwest Asia and north Africa, mainly wintering in its breeding range except for the northernmost birds. In Britain, this seabird is usually referred to as simply the shag. The scientific genus name is Latinized Ancient Greek, from φαλακρός (phalakros, “bald”) and κόραξ (korax, “raven”). The species name aristotelis commemorates the Greek philosopher Aristotle.

This is a medium-large black bird, 27 to 31 inches (68 to 78 cm) long and with a 37 to 43-inch (95-to-110-centimeter) wingspan. It has a longish tail and yellow throat-patch. Adults have a small crest in the breeding season. It is distinguished from the great cormorant by its smaller size, lighter build, thinner bill, and, in breeding adults, by the crest and metallic green-tinged sheen on the feathers. Among those differences are that a shag has a lighter, narrower beak; and the juvenile shag has darker underparts. The European shag’s tail has 12 feathers, the great cormorant’s 14 feathers. The green sheen on the feathers results in the alternative name green cormorant sometimes being given to the European shag.

It feeds in the sea, and, unlike the great cormorant, is rare inland. It will winter along any coast that is well-supplied with fish.

The European shag is one of the deepest divers among the cormorant family. Using depth gauges, European shags have been shown to dive to at least 148 feet (45 meters). European shags are preponderantly benthic feeders, i.e. they find their prey on the sea bottom. They will eat a wide range of fish but their commonest prey is the sand eel. Shags will travel many kilometers from their roosting sites in order to feed.

In U.K. coastal waters, dive times are typically around 20 to 45 seconds, with a recovery time of around 15 seconds between dives; this is consistent with aerobic diving, i.e. the bird depends on the oxygen in its lungs and dissolved in its bloodstream during the dive. When they dive, they jump out of the water first to give extra impetus to the dive.

It breeds on coasts, nesting on rocky ledges or in crevices or small caves. The nests are untidy heaps of rotting seaweed or twigs cemented together by the bird’s own guano. The nesting season is long, beginning in late February but some nests not started until May or even later. Three eggs are laid. Their chicks hatch without down and so they rely totally on their parents for warmth, often for a period of two months before they can fly. Fledging may occur at any time from early June to late August, exceptionally to mid-October. 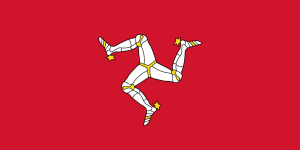