Davaar Island (Eilean Dà Bhàrr in Scottish Gaelic) is located at the mouth of Campbeltown Loch off the east coast of Kintyre, in Argyll and Bute, Scotland. It is a tidal island, linked to the mainland by a natural shingle causeway called the Dhorlin near Campbeltown at low tide. The crossing can be made in around 40 minutes.

Davaar was known as the island of Sanct Barre between the years 1449 to 1508. The modern form Davaar is from older Do Bharre — thy St Barre. A popular derivation is Double-pointed (Da-Bharr) Island. 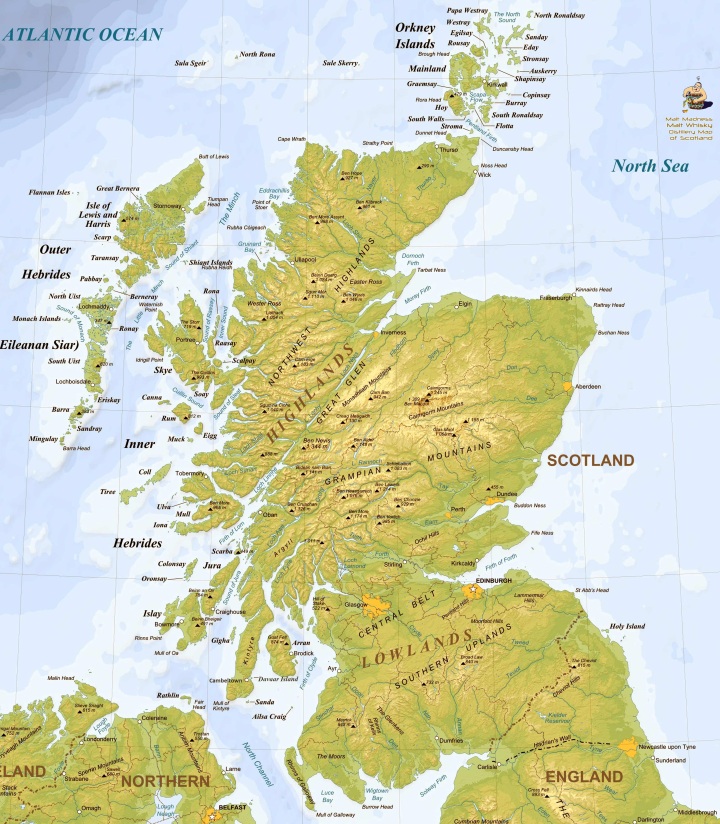 In 1854, a Lighthouse was built on the north of the island by the lighthouse engineers David and Thomas Stevenson. The lighthouse was automated in 1983, and today, Davaar is inhabited by caretakers, sheep, goats and mink. The Lookout, a square building standing on a small knoll close to the lighthouse, was built during World War Two to house naval crews, whose task it was to stretch anti-submarine nets across the water, protecting Campbeltown. It is now rented out as a holiday home.

The island is also known for its seven caves, one of which contains a life size cave painting depicting the crucifixion, painted in 1887 by local artist Archibald MacKinnon after he had a vision in a dream suggesting him to do so. The painting caused uproar in the area as it was seen as a sign from God; it is said that when the townsfolk discovered it was MacKinnon, and not God, he was exiled from the town indefinitely. Restored several times since, including twice by the original artist, the painting was vandalized in July 2006, having a red and black depiction of Che Guevara painted over the original masterpiece. It has since been restored again.

In 2001, the island had a population of two as recorded by the census but in 2011 there were no “usual residents” living there.

Local post stamps were issued for Davaar starting in 1964 to serve visitors to the island who wished to have their mail posted there. Mail was carried by the boatman to the nearest GPO post box at Campbeltown on the mainland. Postage rates were double those of the UK. The boatman postal service ended some time in the early 1970s, but stamps bearing the Davaar Island name were printed at least until the late 1980s with three sets of locomotive stamps printed by Format International Security Printers between 1983 and 1987.

The actual years the Davaar Island stamps were issued was a mystery for many years. No documentation was saved and only the last set of automobile stamps had been proven to be printed in 1987 from a single printers invoice. It was discovered that collector Clive Feigenbaum kept the order of issue filed on the Stampdile website. Feigenbaum was responsible for the production of all the Davaar Island issues. According to the site:

“Stampdile Ltd was formed in 1980 by Clive Feigenbaum, a devoted philatelist for virtually all his life. He started dealing as a schoolboy and by the age of 18, had his own stamp shop in Paddington. During the 1970’s, Clive pioneered the introduction of topical or thematic collecting, first through his British Local issues and later as a philatelic agent, acting as consultant to various governments. In 1984, he became chairman at Stanley Gibbons – a role where he still actively promoted thematic collecting.“

It is controversial as to whether or not these stamps were actually used for their intended usage. It is documented that 1900 sets of the 1987 locomotives issue were produced by Format Printers. This quantity can probably be used for the earlier issues as well. The majority of the labels “issued” by Davaar were thematic stamps designed to be attractive to topical stamp collectors.

An example is today’s stamp, a 6-pence local post issue commemorating the 200th anniversary of the United States of America, bearing a representative of the Cheyenne — one of the indigenous peoples of the Great Plains. It would appear that the BICENTENNIAL / 1776-1976 inscription is a handstamped overprint, possibly applied to a previously-issued multi-colored stamp. The American Bicentennial celebrations culminated on the anniversary of the Declaration of Independence on July 4, 1776.

At the time of their first contact with the Europeans, the Cheyenne were living in the area of what is now Minnesota. At times they have been allied with the Lakota and Arapaho, and at other points enemies of the Lakota. In the early eighteenth century, they migrated west across the Mississippi River and into North and South Dakota, where they adopted the horse culture. Having settled the Black Hills of South Dakota and the Powder River Country of present-day Montana, they introduced the horse culture to Lakota bands about 1730. Allied with the Arapaho, the Cheyenne pushed the Kiowa to the Southern Plains. In turn, they were pushed west by the more numerous Lakota.

The Cheyenne Nation or Tsêhéstáno was at one time composed of ten bands that spread across the Great Plains from southern Colorado to the Black Hills in South Dakota. They fought their traditional enemies, the Crow and later (1856–1879) the United States Army forces. In the mid-nineteenth century, the bands began to split, with some bands choosing to remain near the Black Hills, while others chose to remain near the Platte Rivers of central Colorado.

The Northern Cheyenne, known in Cheyenne either as Notameohmésêhese, meaning “Northern Eaters” or simply as Ohmésêhese meaning “Eaters”, live in southeastern Montana on the Northern Cheyenne Indian Reservation. Tribal enrollment figures, as of late 2014, indicate that there are approximately 10,840 members, of which about 4,939 reside on the reservation. Approximately 91% of the population are Native Americans (full or part race), with 72.8% identifying themselves as Cheyenne. Slightly more than one quarter of the population five years or older spoke a language other than English.

The Southern Cheyenne, known in Cheyenne as Heévâhetaneo’o meaning “Roped People”, together with the Southern Arapaho, form the Cheyenne and Arapaho Tribes, in western Oklahoma. Their combined population is 12,130, as of 2008. In 2003, approximately 8,000 of these identified themselves as Cheyenne, although with continuing intermarriage it has become increasingly difficult to separate the tribes.