After the breakup of the Federation of Rhodesia and Nyasaland in 1964, the former colony of Southern Rhodesia adopted the name Rhodesia in October 1964. On November 11, 1965, it unilaterally declared its independence (UDI) which was not recognized by Britain, the UN or other major powers. While these applied economic sanctions ‘Patriotic Front’ guerrillas waged war on the regime from Mozambique and Zambia. The ruling white minority allowed limited black suffrage; elections brought to power a multiracial conservative government (which adopted the name Zimbabwe- Rhodesia) but increased opposition from radical and Communist rebels.

Initially, the territory was referred to as South Zambezia, a reference to the River Zambezi, until the name Rhodesia came into use in 1895. This was in honor of Cecil Rhodes, the British empire-builder and key figure during the British expansion into southern Africa. In 1953, with calls for independence mounting in many of its African possessions, the United Kingdom created the Federation of Rhodesia and Nyasaland (or the Central African Federation, CAF), which consisted of Southern Rhodesia, Northern Rhodesia and Nyasaland (now Zimbabwe, Zambia, and Malawi, respectively).

The Federation of Rhodesia and Nyasaland was dissolved on January 1, 1964. However, it was expected that only Nyasaland would be let go, whilst the remainder of Rhodesia both north and south would be united. Although Northern Rhodesia had a white population of over 100,000, as well as additional British military and civil units and their dependents, most of these were relatively new to the region, were primarily in the extraction business, had little landed interests, and were more amenable to allowing black nationalism than the Southern Rhodesians. 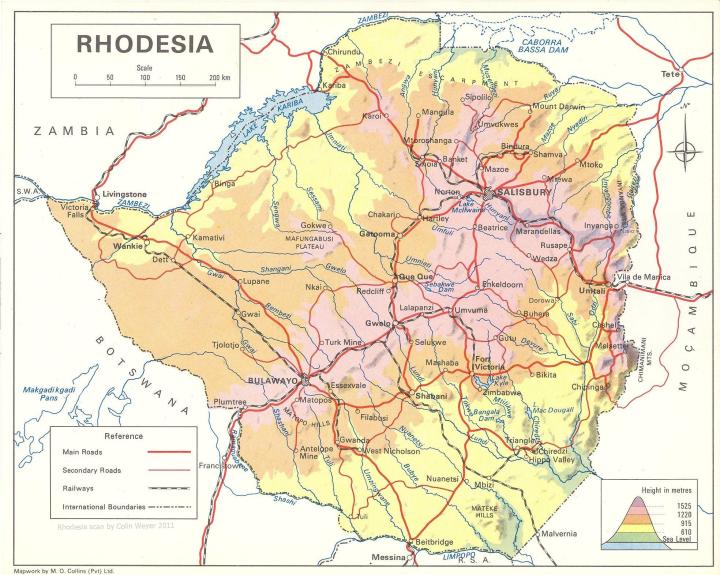 Britain granted independence to Northern Rhodesia on October 24, 1964. However, when the new nationalists changed its name to Zambia and began tentatively at first and later in rapid march an Africanisation campaign, Southern Rhodesia remained a British colony, resisting attempts to bring in majority rule. The colony attempted to change its name to Rhodesia although this was not recognized by the United Kingdom. The majority of the Federation’s military and financial assets went to Southern Rhodesia, since the British Government did not wish to see them fall into the hands of the nationalist leaders, and since Southern Rhodesia had borne the major expenses of running the Federation. With regard to the latter, however, Northern Rhodesia was the wealthiest of the three member states (due to its vast copper mines) and had contributed more to the overall building of infrastructure than the other two members did.

Southern Rhodesia, recognizing an inevitable dissolution of the Federation, was quick to use federal funds in building its infrastructure ahead of the others. A key component of this was the building of the Kariba Dam and its hydroelectric facility (shafts, control center, etc.), which was situated on the Southern Rhodesian side of the Zambezi Gorge. This situation caused some embarrassment for the Zambian government later when it was a “front line state” in support of insurgents into Rhodesia in that its major source of electric power was controlled by the Rhodesian state.

On October 7, 1964, the Southern Rhodesian government announced that when Northern Rhodesia achieved independence as Zambia, the Southern Rhodesian government would officially become known as the Rhodesian Government and the colony would become known as Rhodesia. On October 23 of that year, the Minister of Internal Affairs notified the Press that the Constitution would be amended to make this official. The Legislative Assembly then passed an Interpretation Bill to declare that the colony could be referred to as Rhodesia. The Bill received its third reading on December 9, 1964, and passed to the Governor for assent.

In 1965, Rhodesia unilaterally declared itself independent under a white-dominated government led by Ian Smith. The Unilateral Declaration of Independence (UDI) was in the name of Rhodesia. While the new name was widely used, Southern Rhodesia remained the colony’s formal name in United Kingdom constitutional theory: for example, the Act passed by the United Kingdom Parliament declaring the independence a legal nullity was entitled the Southern Rhodesia Act, 1965. When the rebellion was formally declared at an end by the passing of the Constitution of Zimbabwe-Rhodesia (Amendment) (No. 4) Act 1979, the United Kingdom resumed the governance of the colony under the direct control of the Governor, using the name of Southern Rhodesia.

Initially, the state retained its pledged loyalty to Elizabeth II of the United Kingdom, recognizing her as Queen of Rhodesia. When Smith and Deputy Prime Minister Clifford Dupont called on colonial Governor, Sir Humphrey Gibbs, to formally notify him of the UDI, Gibbs condemned the UDI as an act of treason. After Smith formally announced the UDI on the radio, Gibbs sacked the entire cabinet on orders from Whitehall. However, he was unable to enact any concrete actions to foster a return to legality. Government ministers simply ignored his notices, pointing out that UDI made his office obsolete. Even so, Gibbs continued to occupy his residence in Salisbury until 1970, when he vacated the premises and left Rhodesia following the declaration of a republic. He had effectively been superseded before then; on 20 December 1965, Smith named Dupont as “Officer Administering the Government”; an earlier attempt to have him named as Governor-General of Rhodesia was dismissed out of hand.

In September 1968, the Appellate Division of the Rhodesian High Court ruled that Ian Smith’s administration had become the de jure government of the country, not merely the de facto one. To support his decision, Chief Justice Sir Hugh Beadle used several statements made by Hugo Grotius, who maintained that there was no way in which a nation could rightly claim to be governing a particular territory — if it was waging a war against that territory. Beadle argued that due to Britain’s economic war against Rhodesia, she could not (at the same point) be described as governing Rhodesia. Resulting court decisions held that the rebel government “could lawfully do anything its predecessors could lawfully have done”.

During a two-proposition referendum held in 1969, the proposal for severing all remaining ties to the British Crown passed by a majority of 61,130 votes to 14,327.[5] Rhodesia declared itself a republic on March 2, 1970. Under the new constitution, a president served as ceremonial head of state, with the prime minister nominally reporting to him. Some in Rhodesian government had hoped in vain that the declaration of a republic would finally prompt other nations to grant recognition. On April 18, 1980, the country became independent as the Republic of Zimbabwe, and its capital, Salisbury, was renamed Harare two years later.

Rhodesia issued its first stamps following the dissolution of the Federation of Rhodesia & Nyasaland on May 17, 1965 — a three-stamp set marking the centennial of the International Telecommunications Union (Scott #200-202). The first stamp released under the government of Prime Minister Ian Smith after the Universal Declaration of Independence was a 2 shilling 6 pence stamp bearing the Rhodesian coat of arms issued on December 8, 1965 (Scott #207). Southern Rhodesia stamps were overprinted INDEPENDENCE / 11th November 1965 and released on January 17, 1966. All of the definitives and commemoratives issued between 1965 and 1966 bore the Dorothy Wilding portrait of Queen Elizabeth II as were the 1967-1968 locally-printed dual currency stamps which used the designs of the 1966 definitives.

However, these stamps of Rhodesia were not recognized as valid by Britain and some other countries from 1965-1971 and mail thus franked was treated on arrival as unpaid, with the stamps often gratuitously defaced.

Scott #225 was released on February 9, 1966, a 3 pence stamp portraying a greater kudu. Kudus are two species of antelope of the genus Tragelaphus: the lesser kudu, Tragelaphus imberbis, of eastern Africa and the greater kudu, Tragelaphus strepsiceros, of eastern and southern Africa. Kudu, or koodoo, is the Khoikhoi name for this antelope. Tragos (Greek) denotes a he-goat and elaphos (Greek) a deer. Strepho (Greek) means “twist”, and strephis is “twisting”. Keras (Greek) refers to the horn of the animal. The name of the animal was imported into English in the eighteenth century from isiXhosa iqhude, via Afrikaans koedoe (part zebra, part deer).

Greater kudus have a narrow body with long legs, and their coats can range from brown/bluish grey to reddish brown. They possess between four and 12 vertical white stripes along their torso. The head tends to be darker in color than the rest of the body, and exhibits a small white chevron which runs between the eyes.

Greater kudu bulls tend to be much larger than the cows, and vocalize much more, utilizing low grunts, clucks, humming, and gasping. The bulls also have large manes running along their throats, and large horns with two and a half twists, which, were they to be straightened, would reach an average length of 47 inches (120 centimeters), with the record being 73.87 inches (187.64 cm). They diverge slightly as they slant back from the head. The horns do not begin to grow until the bull is between the age of 6–12 months, twisting once at around two years of age, and not reaching the full two and a half twists until they are six years old; occasionally they may even have three full turns.