The South Shetland Islands are a group of Antarctic islands, lying about 75 miles (120 kilometers) north of the Antarctic Peninsula, with a total area of 1,424 square miles (3,687 square kilometers). As a group of islands, the South Shetland Islands are located at 62°0′S 58°0′W. They are within the region 61° 00’–63° 37′ South, 53° 83’–62° 83′ West. The islands lie 580 miles (940 km) south of the Falkland Islands, and between 58 miles (93 km)  at Deception Island and 167 miles (269 km) at Clarence Island northwest and north from the nearest point of the Antarctic continent, Graham Land. The South Shetlands consist of 11 major islands and several minor ones. Between 80 and 90 percent of the land area is permanently glaciated. The highest point on the island chain is Mount Irving on Clarence Island at 7,546 feet (2,300 meters) above sea level. The South Shetland Islands extend about 280 miles (450 km) from Smith Island and Low Island in the west-southwest to Elephant Island and Clarence Island in the east-northeast.

By the Antarctic Treaty of 1959, the islands’ sovereignty is neither recognized nor disputed by the signatories and they are free for use by any signatory for non-military purposes. The islands have been claimed by the United Kingdom since 1908 and have been part of the British Antarctic Territory since 1962. They are also claimed by the governments of Chile (since 1940, as part of the Antártica Chilena province) and by Argentina (since 1943, as part of Argentine Antarctica, Tierra del Fuego Province).

Several countries maintain research stations on the islands. Most of them are situated on King George Island, benefiting from the airfield of the Chilean base Eduardo Frei. There are sixteen research stations to date in different parts of the islands, with Chilean stations being the greatest in number. Research is often a shared duty of nations, with the Chilean-United States Shirreff Base being one example.

The islands are the same distance from the equator as the Faroe Islands in the North Atlantic, but their proximity to Antarctica means that they have a much colder climate. The sea around the islands is closed by ice from early April to early December and the monthly average temperature is below 32 °F  (0 °C) for eight months of the year (April to November). The islands have experienced measurable glacier retreat during recent years, but despite this, they remain more than 80% snow and ice covered throughout the summer.

The climate is cloudy and humid all year round and very strong westerly winds blow at all seasons. Some of the sunniest weather is associated with outbreaks of very cold weather from the south in late winter and spring. Mean summer temperatures are only about 34.7 °F (1.5 °C) and those in winter are about 23 °F (−5 °C). The effect of the ocean tends to keep summer temperatures low and winter temperatures from decreasing as low as they do inland to the south.

Despite the harsh conditions the islands do support vegetation and are part of the Scotia Sea Islands tundra ecoregion, along with South Georgia and the South Sandwich Islands, the South Orkney Islands and Bouvet Island. All these islands lie in the cold seas below the Antarctic Convergence. These areas support tundra vegetation consisting of mosses, lichens and algae, while seabirds, penguins and seals feed in the surrounding waters. 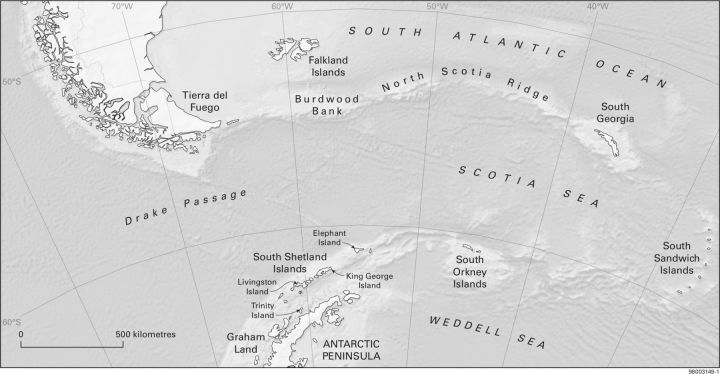 The islands were discovered by the British mariner William Smith in 1819. Although it has been postulated that Dutch mariner Dirck Gerritsz in 1599 or Spanish Admiral Gabriel de Castilla in 1603 might have sighted the South Shetlands, or North or South American sealers might have visited the archipelago before Smith, there is insufficient historical evidence to sustain such assertions. Smith’s discovery, by contrast, was well documented and had wider historical implications beyond its geographic significance.

Chilean scientists have claimed that Amerinds visited the islands, due to stone artifacts recovered from bottom-sampling operations in Admiralty Bay, King George Island, and Discovery Bay, Greenwich Island; however, the artifacts — two arrowheads — were later found to have been planted. In 1818, Juan Pedro de Aguirre obtained permission from the Buenos Aires authorities to establish a base for sealing on “some of the uninhabited islands near the South Pole”.

Captain William Smith in the British merchant brig Williams, while sailing to Valparaíso, Chile in 1819 deviated from his route south of Cape Horn, and on 19 February sighted Williams Point, the northeast extremity of Livingston Island. Thus Livingston Island became the first land ever discovered south of the 60th southern latitude. Smith revisited the South Shetlands, landed on King George Island on 16 October 1819, and claimed possession for Britain.

Meanwhile, the Spanish Navy ship San Telmo sank in September 1819 whilst trying to go through the Drake Passage. Parts of her presumed wreckage were found months later by sealers on the north coast of Livingston Island. From December 1819 to January 1820, the islands were surveyed and mapped by Lieutenant Edward Bransfield on board the Williams, which had been chartered by the Royal Navy.

On November 15, 1819, the United States agent in Valparaíso, Jeremy Robinson, informed the U.S. Secretary of State John Quincy Adams of Smith’s discovery and Bransfield’s forthcoming mission, and suggested dispatching a U.S. Navy ship to explore the islands where “new sources of wealth, power and happiness would be disclosed and science itself be benefited thereby.”

The discovery of the islands attracted British and American sealers. The first sealing ship to operate in the area was the brig Espirito Santo, chartered by British merchants in Buenos Aires. The ship arrived at Rugged Island off Livingston Island, where its British crew landed on Christmas Day 1819, and claimed the islands for King George III. A narrative of the events was published by the brig’s master, Joseph Herring, in the July 1820 edition of the Imperial Magazine. The Espirito Santo was followed from the Falkland Islands by the American brig Hersilia, commanded by Captain James Sheffield (with second mate Nathaniel Palmer), the first US sealer in the South Shetlands.

The first wintering-over in Antarctica took place on the South Shetlands, when at the end of the 1820–21 summer season eleven British men from the ship Lord Melville failed to leave King George Island, and survived the winter to be rescued at the beginning of the next season.

Having circumnavigated the Antarctic continent, the Russian Antarctic expedition of Fabian von Bellingshausen and Mikhail Lazarev arrived at the South Shetlands in January 1821. The Russians surveyed the islands and named them, landing on both King George Island and Elephant Island. While sailing between Deception and Livingston islands, Bellingshausen was visited by Nathaniel Palmer, master of the American brig Hero, who informed him of the activities of dozens of American and British sealing ships in the area.

Seal hunting and whaling was conducted on the islands during the 19th and early 20th century. Beginning in 1908, these islands were governed as part of the Falkland Islands Dependency, but they have only been occupied by humans since the establishment of a scientific research station in 1944. The archipelago, together with the nearby Antarctic Peninsula and South Georgia Island, is an increasingly popular tourist destination during the southern summer.

The first post office in the Falkland Island Dependencies was opened on the South Shetland Islands with postal facilities provided at the Port Foster whaling station on Deception Island for the 1912-1913 whaling season. These were available each year between November and the following April until March 1931. No postmark was provided for the 1912-1913 season and the local postmaster was instructed to cancel stamps (Falkland Islands issues were used) on cover with a straight-line POST FOSTER handstamp, Most letters so cancelled subsequently received a FALKLAND ISLANDS circular postmark dated between March 19 and 28, 1913. It is known that only low value stamps were available at Port Foster. Higher values, often with other FALKLAND ISLANDS postmark dates were, it is believed, subsequently “made to order.”

The post office at Port Foster cancelled stamps with an oval DECEPTION ISLAND SOUTH SHETLANDS postmark in black or violet between 1914 and 1927. A SOUTH SHETLANDS circular datestamp was used at Port Foster between 1923 and March 1931. The whaling station was abandoned at the end of the 1930-1931 season. It was reoccupied as a Falkland Islands Dependencies Survey base on February 3, 1944. Stamps of the Falkland Islands are found cancelled at Port Foster or Admiralty Bay with South Shetlands circular datestamps between February 5, 1944, and January 31, 1954.

On February 5, 1944, eight Falkland Islands stamps first released in 1938 and 1941 were overprinted SOUTH SHETLANDS / DEPENDENCY OF in red ink (Scott #5L1-5L8). These were replaced on July 12, 1946, by general issues inscribed FALKLAND ISLANDS DEPENDENCIES, which were used until July 16, 1963. There were two post offices in the South Shetland Islands during this time, Admiralty Bay (opened January 1948, closed January 1961) and Deception Island. The ½ penny denomination (Scott #5L1) of the 1944 South Shetlands overprinted set features an engraved image of the Centennial Monument, a whalebone arch made from the jaws of two blue whales. The monument was raised in 1933 to commemorate the centenary of the British rule in Falkland Islands. It sits in front of Christ Church Cathedral on Ross Road, in Stanley, Falkland Islands. This is the southernmost Anglican cathedral in the world, consecrated in 1892, and the parish church of the Falkland Islands, South Georgia and the British Antarctic Territories. The Cathedral was built on the site of Holy Trinity Church, which was destroyed by the peat slip that destroyed part of Stanley in 1886. 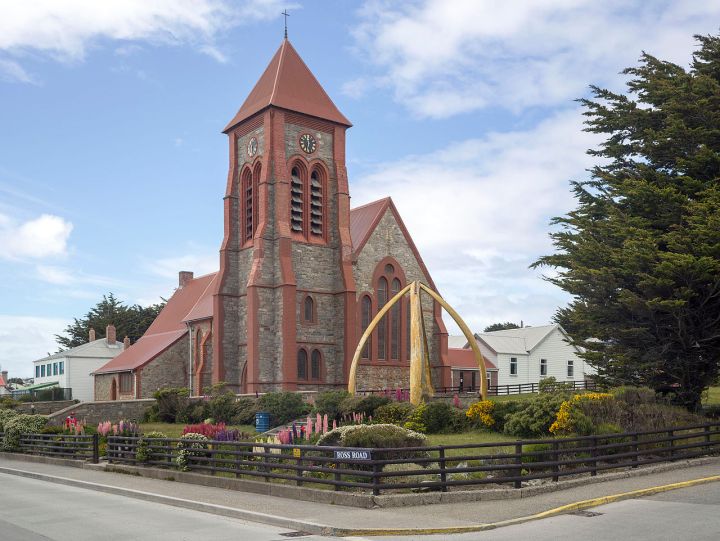