The Togolese Republic (République togolaise in French), is a country in West Africa bordered by Ghana to the west, Benin to the east and to the north, Togo is bound by Burkina Faso. It extends south to the Bight of Benin in the Gulf of Guinea, where its capital Lomé is located. Togo covers 21,935 square miles (56,785 square kilometers), making it one of the smallest countries in Africa, with a population of approximately 7.5 million. Togo lies mostly between latitudes 6° and 11°N, and longitudes 0° and 2°E.

The coast of Togo in the Gulf of Guinea is about 35 miles (56 km) long and consists of lagoons with sandy beaches. In the north the land is characterized by a gently rolling savanna in contrast to the center of the country, which is characterized by hills. The south of Togo is characterized by a savanna and woodland plateau which reaches to a coastal plain with extensive lagoons and marshes. The highest mountain of the country is the Mont Agou at 3,234.91 feet (986 meters) above sea level. The longest river is the Mono River with a length of 249 miles (400 km). It runs from north to south.

From the 11th to the 16th century, various tribes entered the region from all directions. From the 16th century to the 18th century, the coastal region was a major trading center for Europeans to search for slaves, earning Togo and the surrounding region the name “The Slave Coast”. In 1884, Germany declared Togoland a protectorate. After World War I, rule over Togo was transferred to France. Togo gained its independence from France in 1960. In 1967, Gnassingbé Eyadéma led a successful military coup d’état after which he became president. At the time of his death in 2005, Gnassingbé was the longest-serving leader in modern African history, after having been president for 38 years. In 2005, his son Faure Gnassingbé was elected president.

Togo is a tropical, sub-Saharan nation, whose economy depends highly on agriculture, with a climate that provides good growing seasons. While the official language is French, many other languages are spoken in Togo, particularly those of the Gbe family. The largest religious group in Togo consists of those with indigenous beliefs, and there are significant Christian and Muslim minorities. Togo is a member of the United Nations, African Union, Organisation of Islamic Cooperation, South Atlantic Peace and Cooperation Zone, La Francophonie and Economic Community of West African States.

Archaeological finds indicate that ancient tribes were able to produce pottery and process iron. The name Togo is translated from Ewe language language as “land where lagoons lie”. Not much is known of the period before arrival of the Portuguese in 1490. During the period from the 11th century to the 16th century, various tribes entered the region from all directions: the Ewé from the east, and the Mina and Guin from the west. Most of them settled in coastal areas. The slave trade began in the 16th century, and for the next two hundred years the coastal region was a major trading center for Europeans in search of slaves, earning Togo and the surrounding region the name “The Slave Coast”.

In 1884, a treaty was signed at Togoville with the King Mlapa III, whereby Germany claimed a protectorate over a stretch of territory along the coast and gradually extended its control inland. Its borders were defined after the capture of hinterland by German forces and signing agreements with France and Britain. In 1905, this became the German colony of Togoland. The local population was forced to work, cultivate cotton, coffee and cocoa and pay high taxes. A railway and the port of Lomé were built for export of agricultural products. The Germans introduced modern techniques of cultivation of cocoa, coffee and cotton and developed the infrastructure.

During the First World War, Togoland was invaded by Britain and France, proclaiming the Anglo-French condominium. On December 7, 1916, the condominium collapsed and Togo was divided into British and French zones. July 20, 1922, Great Britain received the League of Nations mandate to govern the western part of Togo and France to govern the eastern part. In 1945, the country received the right to send three representatives to the French parliament.

After World War II, these mandates became United Nations Trust Territories. The residents of British Togoland voted to join the Gold Coast as part of the new independent nation of Ghana in 1957. French Togoland became an autonomous republic within the French Union in 1959, while France retained the right to control the defense, foreign relations and finances.

In December 1961, leaders of opposition parties had been arrested, because they were accused of the preparation of an anti-government conspiracy. A decree was issued on the dissolution of the opposition parties. Olympio was mainly trying to reduce dependence on France by establishing cooperation with the United States, Great Britain and Germany. He also rejected efforts of French soldiers who were demobilized after the war in Algeria and tried to get a position in the Togolese army. These factors eventually led to a military coup in January 13, 1963, during which he was assassinated by a group of soldiers under the direction of Sergeant Etienne Eyadéma Gnassingbé. A state of emergency was declared in Togo.

The military handed over power to an interim government led by Nicolas Grunitzky. In May 1963, Grunitzky was elected President of the Republic. The new leadership pursued a policy of developing relations with France. His main aim was to dampen the contradictions between north and south, promulgate a new constitution (1963) and introduce a multiparty system.

Exactly four years later, on January 13, 1967, Eyadéma Gnassingbé overthrew Grunitzky in a bloodless coup and assumed the presidency. He created the “Rally of the Togolese People” party, banned activities of other political parties and introduced a one-party system in November 1969. He was reelected in 1979 and 1986. In 1983, the privatization program launched and in 1991 other political parties were allowed. In 1993, the EU froze the partnership, describing Eyadema’s re-election in 1993, 1998 and 2003, as the seizure of the power. In April 2004, in Brussels, talks were held between the European Union and Togo, on the resumption of cooperation.

Eyadéma Gnassingbé suddenly died on February 5, 2005, after 38 years in power, the longest occupation of any dictator in Africa. The military’s immediate installation of his son, Faure Gnassingbé, as president provoked widespread international condemnation, except from France. Some democratically elected African leaders such as Abdoulaye Wade of Senegal and Olusegun Obasanjo of Nigeria supported the move, thereby creating a rift within the African Union.

Gnassingbe left the power and held elections, which he won two months later. The opposition declared that the election results were fraudulent. The events in 2005 led to re-question the commitment to democracy that Togo had contracted in an attempt to normalize relations with the EU, which cut off aid in 1993 to the uncertainty of the human rights situation. In addition, up to 400 people were killed for political violence surrounding the presidential elections, according to the UN. Around 40,000 Togolese fled to neighboring countries. Faure Gnassingbé was reelected in 2010 and 2015.

The first posts in Togo were established by German traders in the 1880s who operated from the coastal towns and used German West African mail boats. Mail entered the German postal system at Hamburg. There were 17 German post offices before the 1914 invasion.

The first stamps used in Togo were unoverprinted stamps of Germany used at Klein-Popo from March 1, 1888, and at Lome from March 1, 1890. They may be recognized by the cancellations used. Beginning in June 1897, mainland German stamps with a Togo overprint were made available. In November 1900, the key type stamps known as the Yacht issue were introduced. Water-marked versions of the “Yacht” design stamps became standard in 1909, and they remained in use until the First World War.

In August 1914, Togo was invaded by British and French troops who occupied the country until 1919. The German post office was closed and the occupying forces used German stamps at first, with ANGLO-FRENCH OCCUPATION overprints. From 1915, overprinted British stamps of the Gold Coast were used and French stamps of Dahomey, overprinted TOGO, were in use from 1916. The country was divided into two zones during the occupation with the east bordering Dahomey, a French territory, being run by the French and the west, bordering the British Gold Coast, being run by the British.

In 1922, The League of Nations confirmed the division of the territory into two with the west of Togo being ceded to Gold Coast for ethnic reasons, making Togo the tall, thin, country it is today, and enlarging the current Ghana. Postal arrangements followed accordingly.

In the Second World War, Togo declared for the Vichy Government in France. In 1955 it was made an autonomous republic within the French community.

Togo became independent on April 27, 1960, and joined the Universal Postal Union on March 21, 1962. Togo was one of the first clients of the Inter-Governmental Philatelic Corporation.

In 1941, Togo released a pictorial series with four designs spread over 26 different stamps (Scott #270-295). The six lowest denominations — 2 centimes, 3 centimes, 4 centimes, 5 centimes, 10 centimes, and 15 centimes — all featured a pair of Togalese women. Engraved and perforated 12½, the Scott catalogue lists the color for the 15-centime value (Scott #275) as chestnut. 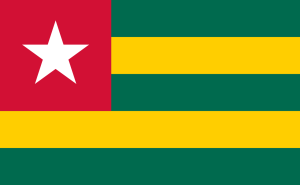