Ubangi-Shari (Oubangui-Chari in French) was a French colony in central Africa from 1906−1958, a part of French Equatorial Africa. It was bordered to the north by Chad, Sudan to the east, Cameroon to the west; the Middle Congo and Belgian Congo lay to the south. At its height, the colony had an area of 238,767 square miles (618,403.7 square kilometers) and a population of 833,916. The capital was initially established at Les Abiras and later moved to Fort de Possel but the rapids at Bangui blocked them from direct communication along the Ubangi River and caused the settlement there to grow in importance until, in 1906, it was chosen as the new headquarters for the French administration.

Ubangi-Shari was named after the Ubangi and Chari rivers along which it was colonized. It was established on December 29, 1903, from the Upper Ubangi (Haut-Oubangui) and Upper Shari (Haut-Chari) territories of the French Congo; renamed the Central African Republic (CAR) on December 1, 1958; and received independence on August 13, 1960. 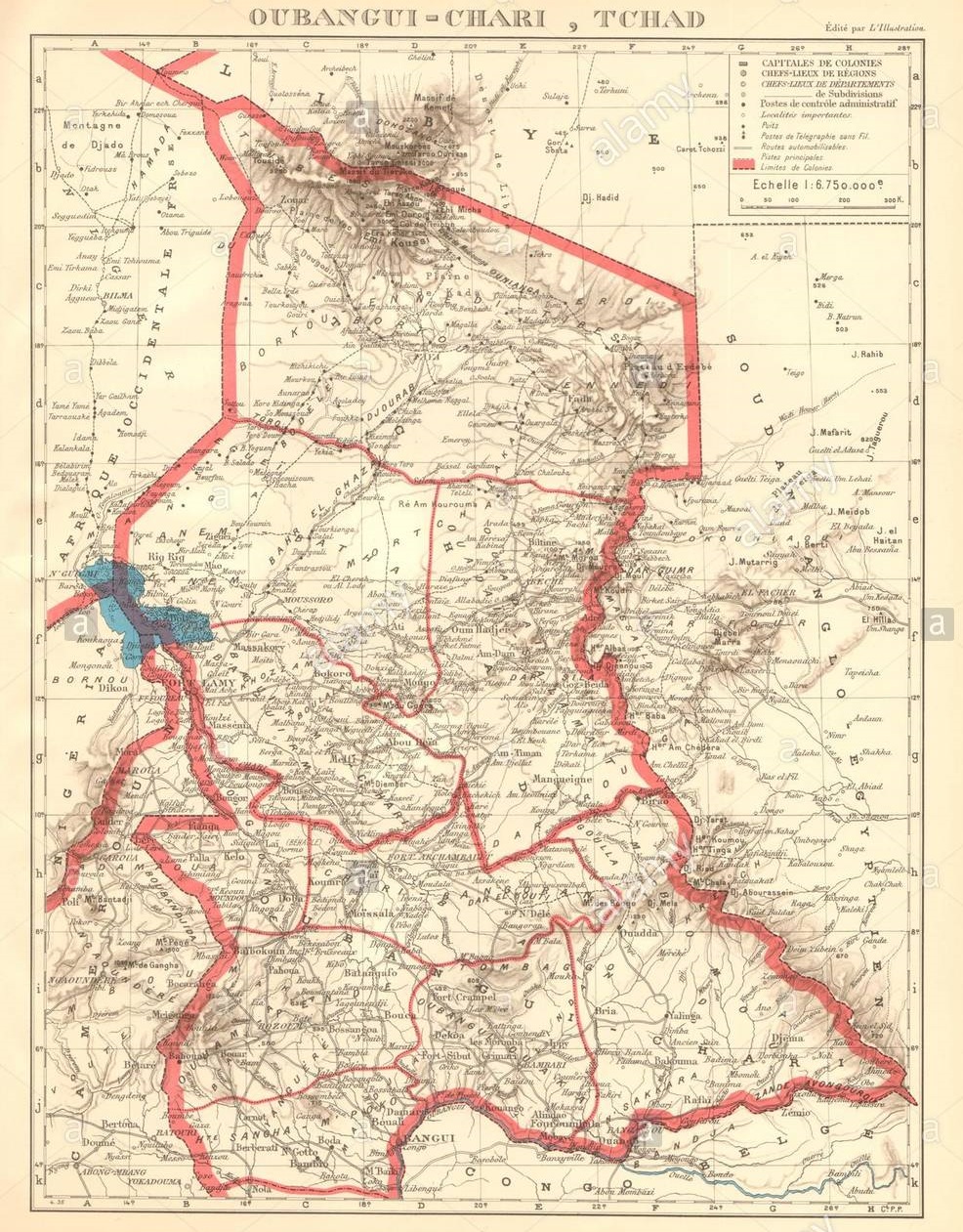 French activity in the area began in 1889 with the establishment of the outpost Bangi (now Bangui) at the head of navigation on the Ubangi. Bangui was founded by Albert Dolisie and Alfred Uzac on June 26, 1889, in what was then the upper reaches of the French Congo, the present-day Congo (Brazzaville). The original site was 6 miles (9.7 km) south of the Ubangi rapids. Its territory was organized first into the territory of the Upper Ubangi (Haut-Oubangui) and then as the separate colony of Ubangi-Shari.

The territories were united as the separate colony of Ubangi-Shari on December 29, 1903, following the French defeat of Abbas II of Egypt, who had claimed the area. On February 11, 1906, this colony merged with the French settlements around Lake Chad and became the Ubangi-Shari territory of Ubangi-Shari-Chad (Oubangui-Chari-Tchad). In 1909, it received the administration over the sultanates of Zemio and Rafai from the Belgian Congo.

On January 15, 1910, this administration was merged with the French Middle Congo and Gabon as the Ubangi-Shari area of French Equatorial Africa (Afrique équatoriale française), or FEA. On April 12, 1916, it again became the separate colony of Ubangi-Shari, but lost the territory around Lake Chad in 1920 and was again folded into FEA on June 30, 1934. As a part of FEA, it was declared an overseas territory on December 31, 1937.

During World War II, it remained loyal to Vichy France from June 16 to August 29, 1940, before being taken by the Free French. It was granted autonomy as the Central African Republic on December 1, 1958, and independence under the same name on August 13, 1960.

Military postal service began at Bangui in 1893, at Fort Possel in 1894, and was gradually extended along the Ubangi River and northwards into the country during the 1900s. Civilian mail used postage stamps of the Middle Congo (Moyen Congo) from 1907.

In 1915, Middle Congo stamps were overprinted OUBANGUI-CHARI-TCHAD to reflect the changed status, and then in 1922 just OUBANGUI-CHARI. In 1924, the 1922 stamps were in turn overprinted AFRIQUE EQUATORIALE FRANCAISE. A number of those were surcharged with new values between 1925 and 1927. In 1928, postage due stamps of France were overprinted OUBANGUI-CHARI / A. E. F., followed in 1930 by a set of 11 postage dues issued specifically for the colony; printed in two colors, the lower values depicted a landscape, and the higher values Émile Gentil. A 1931 issue of four stamps for the Colonial Exposition was the last to be produced for the territory; from 1936 on, French Equatorial Africa issued uniform sets of stamps used throughout its area. Scott #23, 1 centime violet and green, was issued in 1922.