The Overseas Collectivity of Saint Pierre and Miquelon (Collectivité d’Outre-mer de Saint-Pierre-et-Miquelon), is a self-governing territorial overseas collectivity of France, situated in the northwestern Atlantic Ocean near the Newfoundland and Labrador province of Canada. It is the only part of New France that remains under French control, with an area of 93 square miles (242 square kilometers) and a population of 6,080 at the January 2011 census. The islands are situated at the entrance of Fortune Bay, which extends into the southwestern coast of Newfoundland, near the Grand Banks. They are 2,373 miles (3,819 km) from Brest, the nearest point in Metropolitan France, but only 16 miles (25 km) from the Burin Peninsula of Newfoundland.

Located off the western end of the Newfoundland’s Burin Peninsula, the archipelago of Saint Pierre and Miquelon is composed of eight islands, totaling 93 square miles (242 km²), and of which only two are inhabited. The islands are bare and rocky, with steep coasts, and only a thin layer of peat to soften the hard landscape. The islands are geologically part of the northeastern end of the Appalachian Mountains along with Newfoundland.

Saint Pierre Island, whose area is smaller, 10 square miles (26 km²), is the most populous and the commercial and administrative center of the archipelago. Saint-Pierre Airport, has been in operation since 1999 and is capable of accommodating long-haul flights from France. Miquelon-Langlade, the largest island, is in fact composed of two islands, Miquelon Island (also called Grande Miquelon), 42 square miles (110 km²), connected to Langlade Island (Petite Miquelon), 35 square miles (91 km²), by the Dune de Langlade, a 6.2-mile (10-kilometer) long sandy tombolo, A storm had severed them in the 18th century, separating the two islands for several decades, before currents reconstructed the isthmus. The waters between Langlade and Saint-Pierre were called “the Mouth of Hell” (Gueule d’Enfer) until about 1900, as more than 600 shipwrecks have been recorded in that point since 1800. In the north of Miquelon Island is the village of Miquelon-Langlade (710 inhabitants), while Langlade Island was almost deserted (only one inhabitant in the 1999 census).

A third, formerly inhabited island, Isle-aux-Marins, known as Île-aux-Chiens until 1931 and located a short distance from the port of Saint-Pierre, has been uninhabited since 1963.

Saint-Pierre is French for Saint Peter, the patron saint of fishermen.

The present name of Miquelon was first noted in the form of “Micquelle” in the Basque sailor Martin de Hoyarçabal’s navigational pilot for Newfoundland. It has been claimed that the name Miquelon is a Basque form of Michael; Mikel and Mikels are usually named Mikelon in the Basque Country. Therefore, from Mikelon it may have been written in the French way with a “q” instead of a “k”. Though the Basque Country is divided between Spain and France, most Basques live on the south side of the border and speak Spanish, and Miquelon may have been influenced by the Spanish name Miguelón, an augmentative form of Miguel meaning “big Michael”. The adjoined island’s name of Langlade is said to be an adaptation of l’île à l’Anglais (Englishman’s Island). 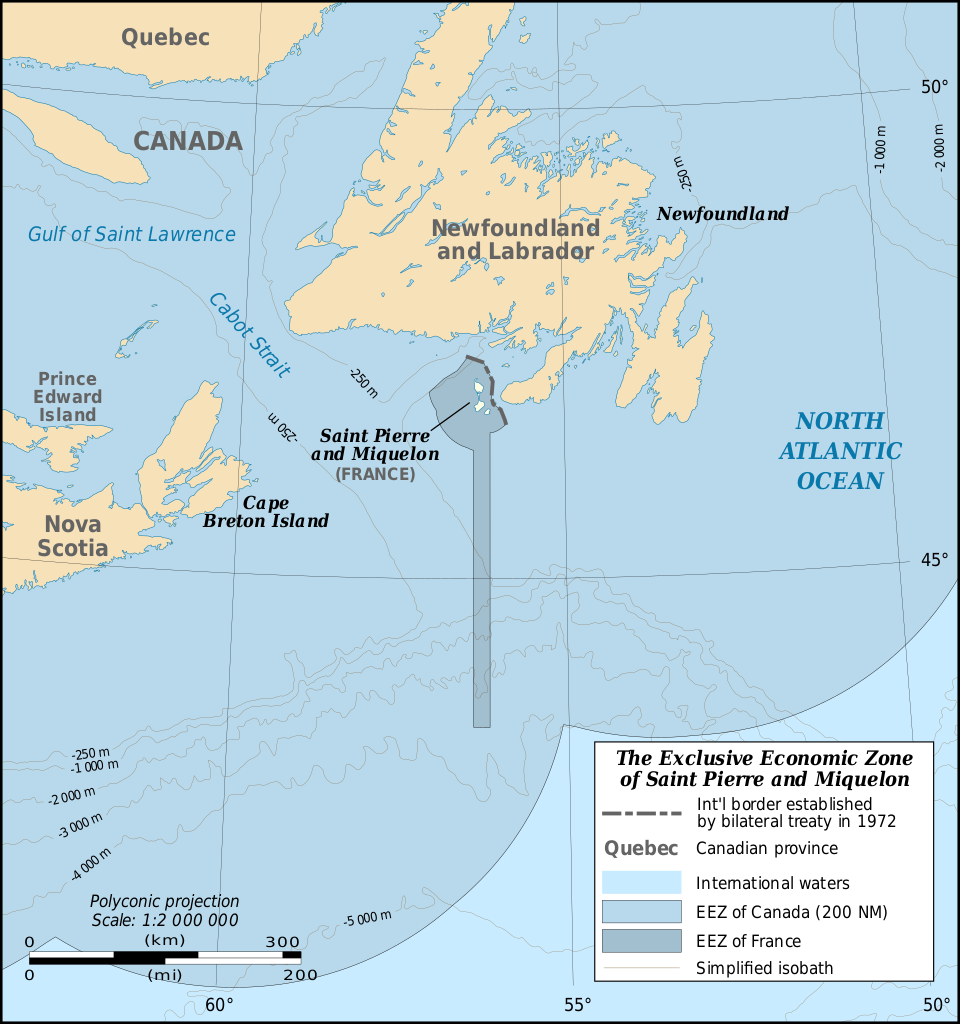 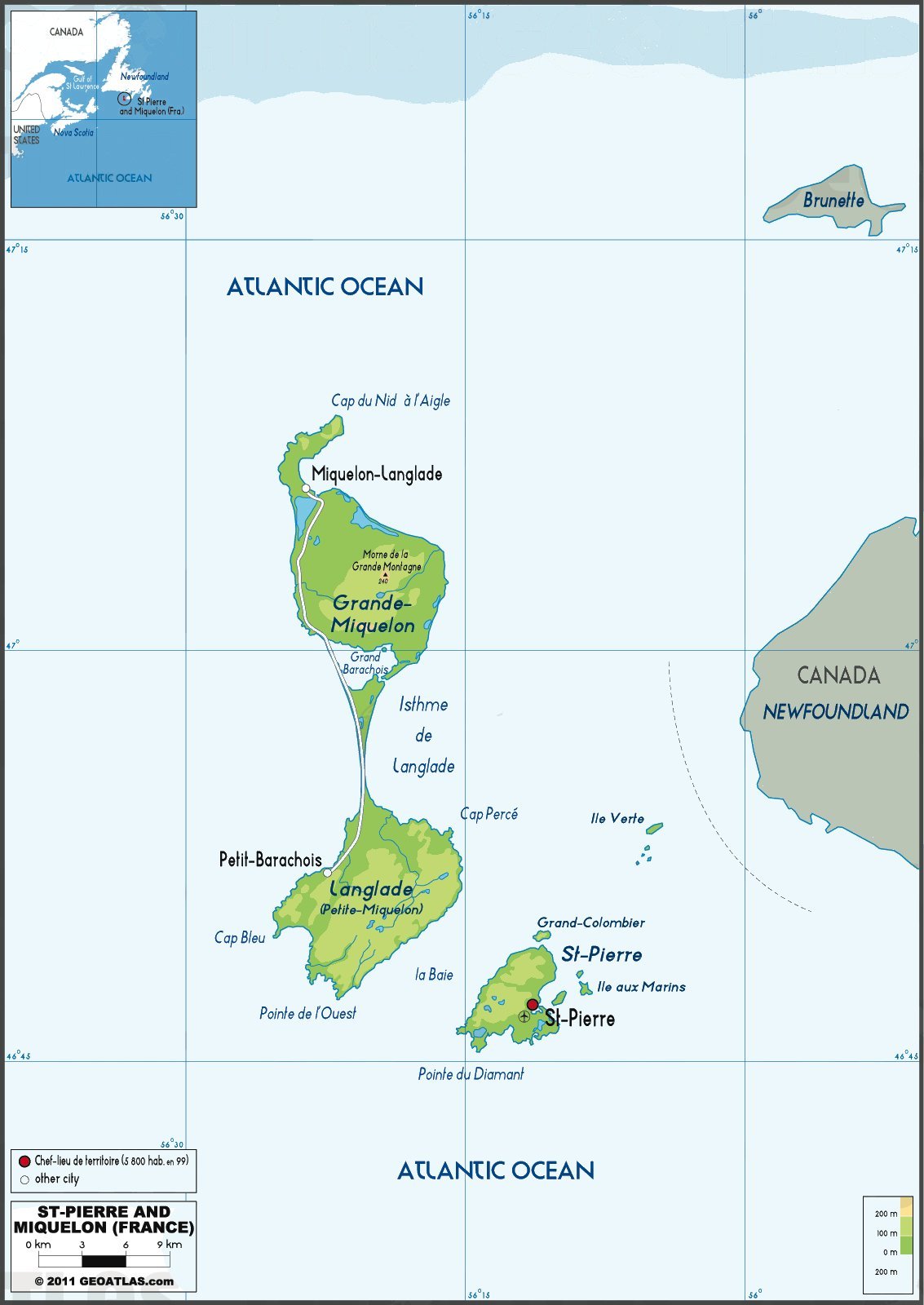 The first European encounter with Saint-Pierre and Miquelon was in 1520, by the Portuguese João Álvares Fagundes. They were made a French possession in 1536 by Jacques Cartier on behalf of the King of France. Though already frequented by Mi’kmaq people and Basque and Breton fishermen, the islands were not permanently settled until the end of the 17th century: four permanent inhabitants were counted in 1670, and 22 in 1691.

In 1670, during Jean Talon’s tenure as Intendant of New France, a French officer annexed the islands when he found a dozen French fishermen camped there. The British Royal Navy soon began to harass the French, pillaging their camps and ships. By the early 1700s, the islands were again uninhabited, and were ceded to the British by the Treaty of Utrecht which ended the War of the Spanish Succession in 1713.

Under the terms of the Treaty of Paris (1763), which put an end to the Seven Years’ War, France ceded all its North American possessions, but Saint-Pierre and Miquelon were returned to France. France also maintained fishing rights on the coasts of Newfoundland (French Shore).

With France being allied with the Americans during the American Revolutionary War, Britain invaded and razed the colony in 1778, sending the entire population of 2,000 back to France. In 1793, the British landed in Saint-Pierre and, the following year, expelled the French population, and tried to install British settlers. The British colony was in turn sacked by French troops in 1796. The Treaty of Amiens of 1802 returned the islands to France, but Britain reoccupied them when hostilities recommenced the next year.

The Treaty of Paris (1814) gave them back to France, though Britain occupied them yet again during the Hundred Days War. France then reclaimed the then uninhabited islands in which all structures and buildings had been destroyed or fallen into disrepair. The islands were resettled in 1816. The settlers were mostly Basques, Bretons and Normans, who were joined by various other elements, particularly from the nearby island of Newfoundland. Only around the middle of the century did increased fishing bring a certain prosperity to the little colony.

In 1892, stamps of the French Navigation and Commerce key-plate were first issued inscribed ST. PIERRE ET MIQUELON (Scott #60-78). From 1909 it issued its own stamps with the islands’ name printed in French, either St. Pierre & Miquelon or Saint Pierre et Miquelon. A long set of pictorials with just three different designs was issued between 1909 and 1930 (Scott #79-109).

During the early 1910s, the colony suffered severely as a result of unprofitable fisheries, and large numbers of its people emigrated to Nova Scotia and Quebec. The draft imposed on all male inhabitants of conscript age after the beginning of World War I crippled the fisheries, which could not be processed by the older people and the women and children. About 400 men from the colony served in the French military during World War I, 25% of whom died. The increase in the adoption of steam trawlers in the fisheries also contributed to the reduction in employment opportunities.

Smuggling had always been an important economic activity in the islands, but it became especially prominent in the 1920s with the institution of prohibition in the United States. In 1931, the archipelago was reported to have imported 1,815,271 U.S. gallons (1,511,529 imperial gallons; 6,871,550 liters) of whisky from Canada in 12 months, most of it to be smuggled into the United States. The end of prohibition in 1933 plunged the islands into economic depression.

During World War II, despite opposition from Canada, Britain and the United States, Charles de Gaulle seized the archipelago from Vichy France, to which the local government had pledged its allegiance. In a referendum the following day, the population endorsed the takeover by Free France. The Vichy government had issued several stamps for St. Pierre and Miquelon in 1941 and 1942 which were also issued with surcharges but these were never placed on sale in the islands (Scott #206A-206B, #B11-12, #299A-299E). Stamps were overprinted FRANCE LIBRE by the Free French Administration beginning in 1942 and were later put on sale at a premium by the Free French Agency in Ottawa, Canada, to benefit the Syndicat des Oeuvres Sociales (Scott #206C-299). Large quantities of these appeared on the market in 1991 with many “errors” and more may exist.

After the 1958 French constitutional referendum, the islands were given the option of becoming fully integrated with France, becoming a self-governing state within the French Community, or preserving the status of overseas territory; it decided to remain a territory. The archipelago became an overseas territory in 1946. On July 1, 1976, the islands became an official overseas department of France and the islands used the stamps of France from April 1, 1978. They acquired the status of territorial collectivity in 1985. On February 3, 1986, St. Pierre and Miquelon once again resumed issuing its own stamps. Since March 2003, the islands have been an overseas collectivity with a special status.

The archipelago has two communes: Saint-Pierre and Miquelon-Langlade. A third commune, Isle-aux-Marins, existed until 1945, when it was absorbed by the municipality of Saint-Pierre. The inhabitants possess French citizenship and suffrage. Saint Pierre and Miquelon sends a senator and a deputy to the National Assembly of France in Paris, and enjoys a degree of autonomy concerning taxes, customs and excise.

France appoints the Prefect of Saint Pierre and Miquelon, who represents the national government in the territory. The Prefect is in charge of national interests, law enforcement, public order and, under the conditions set by the statute of 1985, administrative control. The prefect as of December 2016 is Henri Jean, replacing Jean-Christophe Bouvier. The local legislative body, the Territorial Council (Conseil Territorial), has 19 members: four councilors from Miquelon-Langlade and 15 from Saint-Pierre. The President of the Territorial Council is the head of a delegation of “France in the name of Saint Pierre and Miquelon” for international events such as the annual meetings of NAFO and ICCAT.

France is responsible for the defense of the islands. The Maritime Gendarmerie has maintained a patrol boat, the Fulmar, on the islands since 1997. Law enforcement in Saint Pierre and Miquelon is the responsibility of a branch of the French Gendarmerie Nationale. There are two police stations in the archipelago.

Scott #300 was one of a set of 14 stamps in the same design released by the Free French Administration for St. Pierre and Miquelon in 1942 (Scott #300-313). The stamps were printed by photogravure and perforated 14×14½. The 5-cent dark blue stamp is the lowest value of the series. They depict a fishing schooner with topsail as used in St. Malo for salt and cod transport between Iceland, Denmark and Portugal.

A schooner is a type of sailing vessel with fore-and-aft sails on two or more masts, the foremast being shorter than the main and no taller than the mizzen if there is one. While the schooner was originally gaff-rigged, modern schooners typically carry a Bermuda rig.

Such vessels were first used by the Dutch in the 16th or 17th century. They were further developed in North America from the early 18th century, and came into extensive use in New England. The most common type, with two masts, were popular in trades requiring speed and windward ability, such as slaving, privateering, blockade running, and offshore fishing. In the Chesapeake Bay area, several distinctive schooner types evolved, including the Baltimore clipper, bugeye, and pungy. Schooners were also popular among pirates in the West Indies during the Golden Age of Piracy, for their speed and agility. They could also sail in shallow waters, and while being considerably smaller than other ships of the time period (such as frigates and galleons), they could still hold enough cannons to intimidate merchant vessels into submission.

Schooners were popular on both sides of the Atlantic in the late nineteenth and early twentieth centuries, long dominating yacht races such as the America’s Cup, but gradually gave way in Europe to the cutter.

The schooner on the Free French stamps for St. Pierre and Miquelon is possibly the Étoile A 649 (“star”), a French naval schooner currently used as a training vessel. She was launched on February 8, 1932, and is a replica of a type of fishing vessel which was used until 1935 off Iceland. She has a sister ship, Belle Poule. Both Étoile and Belle Poule joined the Free French Forces during the Second World War, a deed for which they are still honored by flying the French flag with the cross of Lorraine.