I’m sorry but I just can’t seem to get motivated to put together a few thousand words’ article for A Stamp A Day this rainy Friday afternoon. I just want to relax this evening. ASAD will return tomorrow to celebrate yet another birthday — a singer rather than an ocean liner — followed on Sunday with a profile of a former British crown colony which is currently more French than English.

On a sad note, I visited the Phuket Philatelic Museum this morning only to be told that they have no stamps to sell and don’t foresee selling any in the future! This is where I have purchased all of my Thai new issues since returning to the hobby in July or August 2006; it was the proximity of the museum to my home, the ability to examine their stock without any pressure, and the conversations I had with the staff (who spoke English quite well) that helped me fall in love with Thai philately.

Unfortunately, my work schedule had prevented any visits to the museum since last November and I was really looking forward to purchasing all of the stamps released since then (Thailand isn’t exactly a heavy, or expensive, issuer). The one clerk there today had very limited English and my Thai isn’t good enough so I was unable to discover the reason for the lack of stamps; I suspect it may have something to do with last week’s severe flooding in the area from Typhoon Dorthaki. I did ask if the nearby post office is still selling stamps only to be told that they had meter stickers for mailing packages. My past experiences with that post office was that the staff spoke no English and weren’t accommodating to collectors.

I will need to find an alternate source for Thai new issues at face value (I refuse to pay 10 times and more over face on eBay and the Thailand Post standing order account application is confusing enough to be a severe preventative in enrolling!). Hopefully, I will discover that one or more of the other post offices on the island are “collector-friendly” before I get too worried. I’ll put together an article in the near future to report my findings and mourn the Phuket Philatelic Museum. This will appear on either my Asian Meanderings blog or on Philatelic Pursuits (perhaps both). 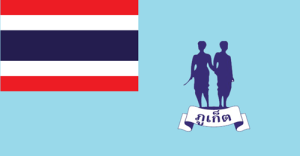