South West Africa (Suidwes-Afrika in Afrikaans, Zuidwest-Afrika in Dutch, and Südwestafrika in German) was occupied by South African troops from 1915, and a mandate of that country by the Treaty of Versailles in 1919 until it achieved independence as Namibia in 1990. Located in southern Africa with the Atlantic Ocean as its western border, the present-day country shares land borders with Zambia and Angola to the north, Botswana to the east and South Africa to the south and east. Although it does not border Zimbabwe, a part of less than 200 metres of the Zambezi River (essentially a small bulge in Botswana to achieve a Botswana/Zambia micro-border) separates the two countries. Its capital and largest city was Windhoek.

The dry lands of the region were inhabited since early times by the San, Damara, and Nama peoples. Since about the 14th century, immigrating Bantu peoples arrived as part of the Bantu expansion. Since then the Bantu groups in total, known as the Ovambo people, have dominated the population of the country and since the late 19th century, have constituted a large majority.

In the late 19th century during European colonization, the German Empire established rule over most of the territory as a protectorate (Schutzgebiet) in 1884. It began to develop infrastructure and farming, and maintained the colony of German South West Africa until 1915, when South African forces defeated its military. After the end of World War I, in 1920 the League of Nations mandated the country to the United Kingdom, under administration by South Africa. It imposed its laws, including racial classifications and rules. From 1948, with the National Party elected to power, South Africa applied apartheid also to what was known as South West Africa. In 1878. the Cape of Good Hope had annexed the port of Walvis Bay and the offshore Penguin Islands; these became an integral part of the new Union of South Africa at its creation in 1910.

In the later 20th century, uprisings and demands for political representation by native African political activists seeking independence resulted in the United Nations assuming direct responsibility over the territory in 1966, but South Africa maintained de facto rule. In 1973, the UN recognized the South West Africa People’s Organisation (SWAPO) as the official representative of the Namibian people; the party is dominated by the Ovambo, who are a large majority in the territory. Following continued guerrilla warfare, South Africa installed an interim administration in Namibia in 1985. Namibia obtained full independence from South Africa in 1990. However, Walvis Bay and the Penguin Islands remained under South African control until 1994.

Being situated between the Namib and the Kalahari deserts, Namibia has the least rainfall of any country in sub-Saharan Africa. 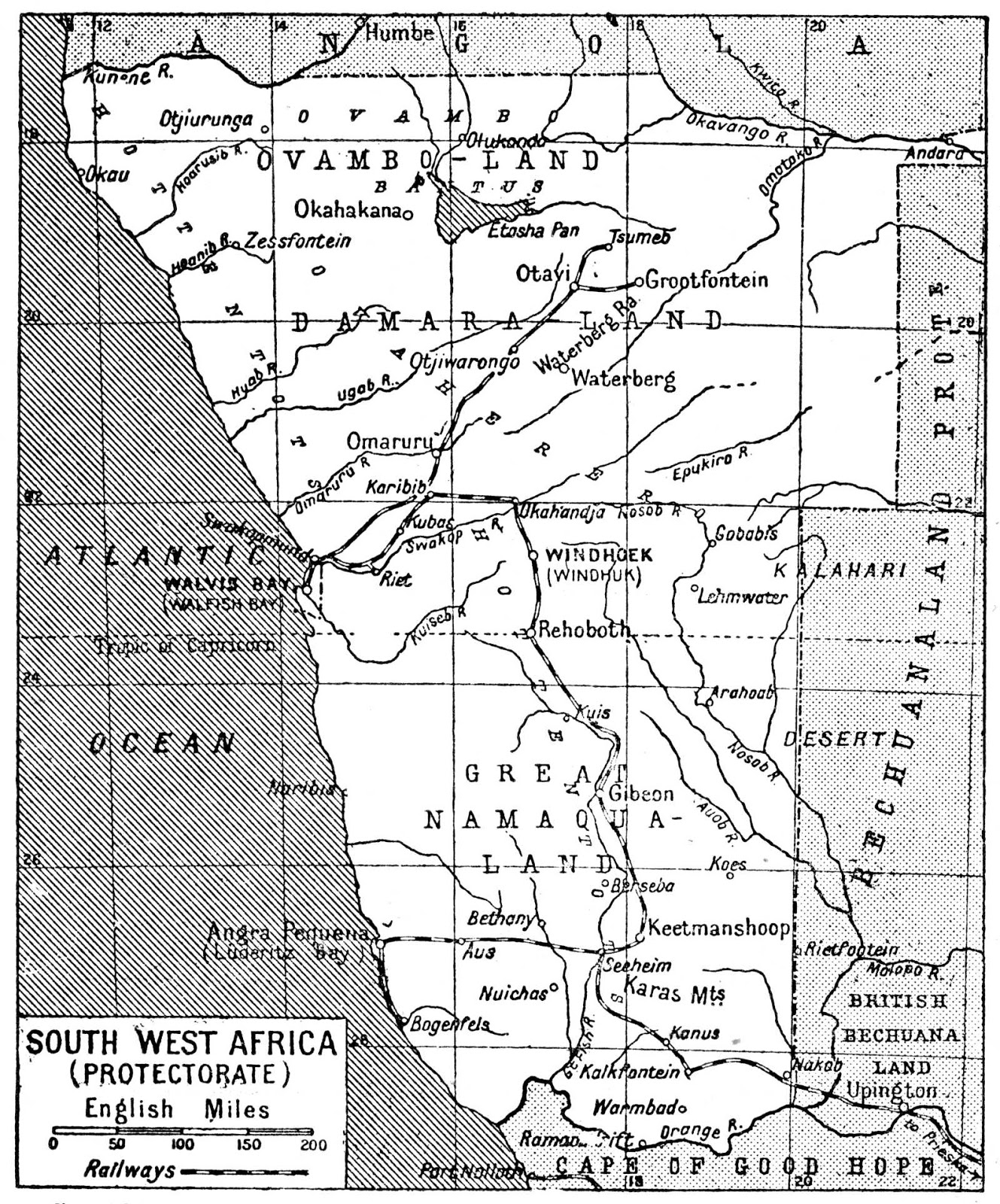 As a German colony from 1884, it was known as German South West Africa (Deutsch-Südwestafrika). Germany had a difficult time administering the territory, which experienced many insurrections, especially those led by guerilla leader Jacob Morenga. The main port, Walvis Bay, and the Penguin Islands were annexed by Britain in 1878, becoming part of the Cape Colony in 1884. Following the creation of the Union of South Africa in 1910, Walvis Bay became part of the Cape Province.

As part of the Heligoland-Zanzibar Treaty in 1890, a corridor of land taken from the northern border of Bechuanaland, extending as far as the Zambezi river, was added to the colony. It was named the Caprivi Strip (Caprivizipfel) after the German Chancellor Leo von Caprivi.

The Mandate was supposed to become a United Nations Trust Territory when League of Nations Mandates were transferred to the United Nations following the Second World War. The Prime Minister, Jan Smuts, objected to South West Africa coming under UN control and refused to allow the territory’s transition to independence, instead seeking to make it South Africa’s fifth province in 1946.

Although this never occurred, in 1949, the South West Africa Affairs Act was amended to give representation in the Parliament of South Africa to whites in South West Africa, which gave them six seats in the House of Assembly and four in the Senate. This was to the advantage of the National Party, which enjoyed strong support from the predominantly Afrikaners and ethnic German white population in the territory. Between 1950 and 1977, all of South West Africa’s parliamentary seats were held by the Nationalists.

In another Advisory Opinion issued in 1955, the Court further ruled that the General Assembly was not required to follow League of Nations voting procedures in determining questions concerning South West Africa. In 1956, the Court further ruled that the Committee had the power to grant hearings to petitioners from the mandated territory. In 1960, Ethiopia and Liberia filed a case in the International Court of Justice against South Africa alleging that South Africa had not fulfilled its mandatory duties. This case did not succeed, with the Court ruling in 1966 that they were not the proper parties to bring the case.

There was a protracted struggle between South Africa and forces fighting for independence, particularly after the formation of the South West Africa People’s Organisation (SWAPO) in 1960.

South West Africa became known as Namibia by the United Nations when the General Assembly changed the territory’s name by Resolution 2372 (XXII) of June 12, 1968. SWAPO was recognized as representative of the Namibian people and gained UN observer status when the territory of South West Africa was already removed from the list of Non-Self-Governing Territories.

In 1977, South Africa transferred control of Walvis Bay back to the Cape Province, thereby making it an exclave. The territory became the independent Republic of Namibia on March 21, 1990, although Walvis Bay and the Penguin Islands were only incorporated into Namibia in 1994.

In 1973, South West Africa became part of the South African post code system, using the number range 9000-9299. This was withdrawn from use after the territory gained independence as Namibia in 1990. In 1989, the last stamps of South West Africa were a set of 15 depicting minerals and mining. Following independence, most of the designs were kept with only the name changed (cuprite was dropped and willemite added for the Namibian issue) and the removal of Afrikaans names. In addition, Afrikaans was removed from postmarks, which, following independence, were in English only.

Van Riebeeck was born in Culemborg on April 21, 1619, as the son of a surgeon. He grew up in Schiedam, where he married 19-year-old Maria de la Quellerie on March 28, 1649. She died in Malacca, now part of Malaysia, on November 2, 1664, at the age of 35. The couple had eight or nine children, most of whom did not survive infancy. Their son Abraham van Riebeeck, born at the Cape, later became Governor-General of the Dutch East Indies.

Joining the Vereenigde Oost-Indische Compagnie (VOC, or Dutch East India Company) in 1639, he served in a number of posts, including that of an assistant surgeon in the Batavia in the East Indies. He was head of the VOC trading post in Tonkin, Indochina.

In 1643, Riebeeck traveled with Jan van Elseracq to the VOC outpost at Dejima in Japan. Seven years later in 1650, he proposed selling hides of South African wild animals to Japan.

In 1651, he volunteered to undertake the command of the initial Dutch settlement in the future South Africa. He landed three ships (Dromedaris, Reijger and Goede Hoop) at the future Cape Town on April 6, 1652, and fortified the site as a way-station for the VOC trade route between the Netherlands and the East Indies. The primary purpose of this way-station was to provide fresh provisions for the VOC fleets sailing between the Dutch Republic and Batavia, as deaths en route were very high. The Walvisch and the Oliphant arrived later in 1652, having had 130 burials at sea.

Van Riebeeck was Commander of the Cape from 1652 to 1662; he was charged with building a fort, with improving the natural anchorage at Table Bay, planting cereals, fruit and vegetables and obtaining livestock from the indigenous Khoi people. In the Kirstenbosch National Botanical Garden in Cape Town, there are a few Wild Almond trees still surviving. The initial fort, named Fort de Goede Hoop (‘Fort of Good Hope’) was made of mud, clay and timber, and had four corners or bastions. This fort was replaced by the Castle of Good Hope, built between 1666 and 1679 after van Riebeeck had left the Cape.

Van Riebeeck was joined at the Cape by a fellow Culemborger Roelof de Man who arrived in January 1654 on board the ship Naerden. Roelof came as the colony bookkeeper and was later promoted to second-in-charge.

In his time at the Cape, Van Riebeeck oversaw a sustained, systematic effort to establish an impressive range of useful plants in the novel conditions on the Cape Peninsula — in the process changing the natural environment forever. Some of these, including grapes, cereals, ground nuts, potatoes, apples and citrus, had an important and lasting influence on the societies and economies of the region. The daily diary entries kept throughout his time at the Cape (VOC policy) provided the basis for future exploration of the natural environment and its natural resources. Careful reading of his diaries indicate that some of his knowledge was learned from the indigenous peoples inhabiting the region. 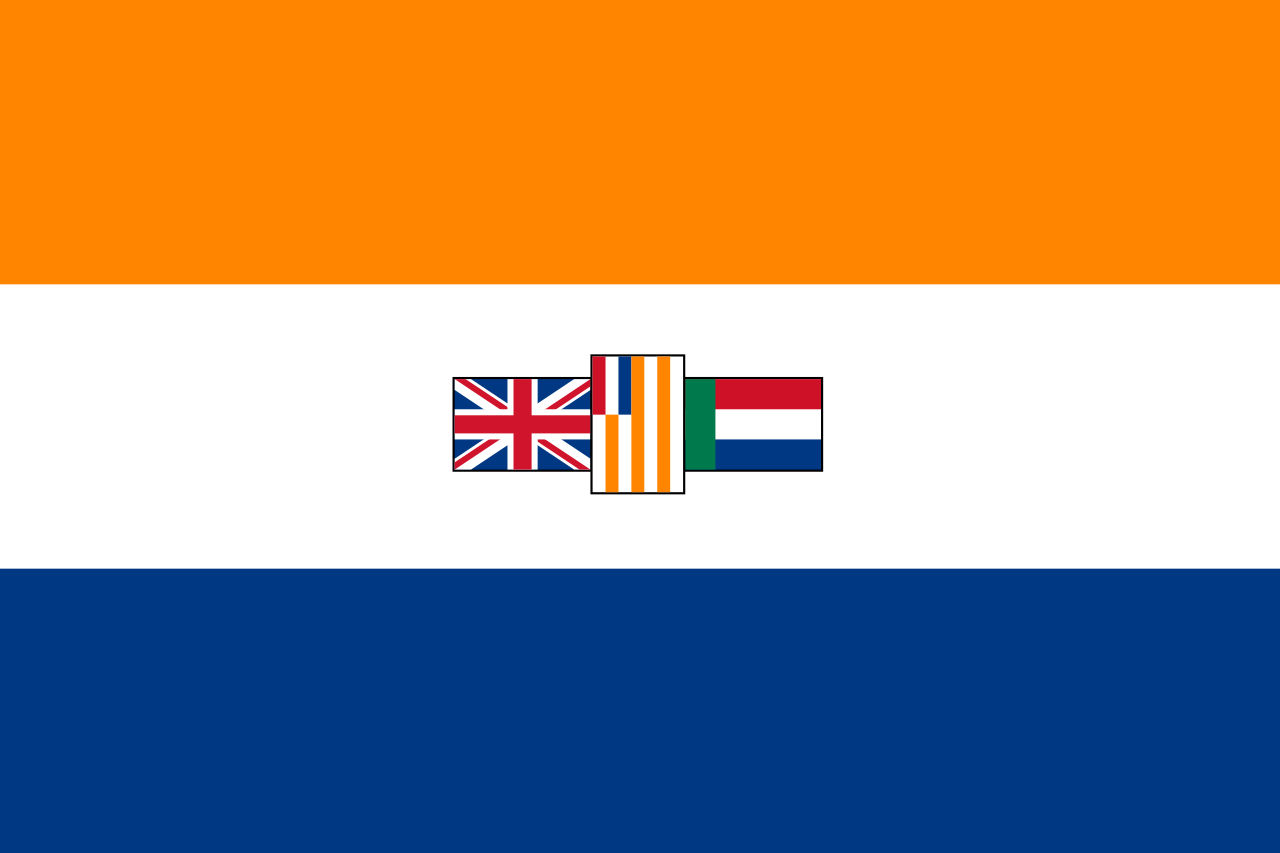 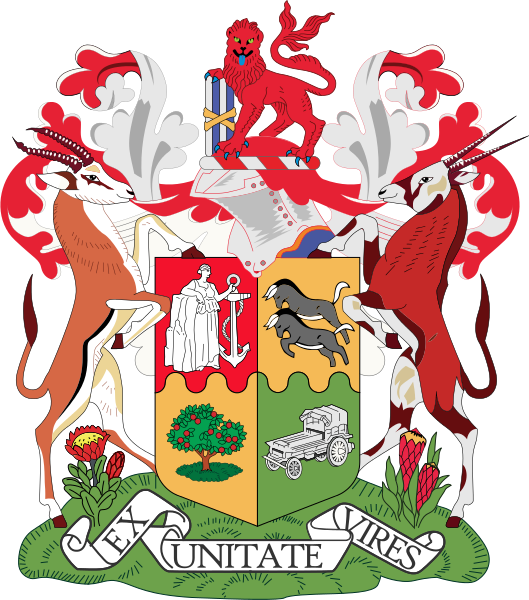