The Spanish Protectorate in Morocco (الحماية الإسبانية على المغرب — Protectorado español en Marruecos) was established on November 27, 1912, by a treaty between France and Spain that converted the Spanish sphere of influence in Morocco into a formal protectorate. The Spanish protectorate consisted of a northern strip on the Mediterranean and the Strait of Gibraltar, and a southern part of the protectorate around Cape Juby, bordering the Spanish Sahara. The northern zone became part of independent Morocco on April 7, 1956, shortly after France had ceded her protectorate (French Morocco). Spain finally ceded her southern zone through the Treaty of Angra de Cintra around Cintra Bay on April 1, 1958, only after the short Ifni War. The city of Tangiers was excluded from the Spanish protectorate and received a special internationally controlled status.

Since France already held a protectorate over the entire country and controlled Morocco’s foreign affairs (since March 30, 1912), it also held the power to delegate a zone to Spanish protection. The surface area of the zone was about 8,088 square miles (20,948 square kilometers), which represents 4.69% of modern-day Morocco. 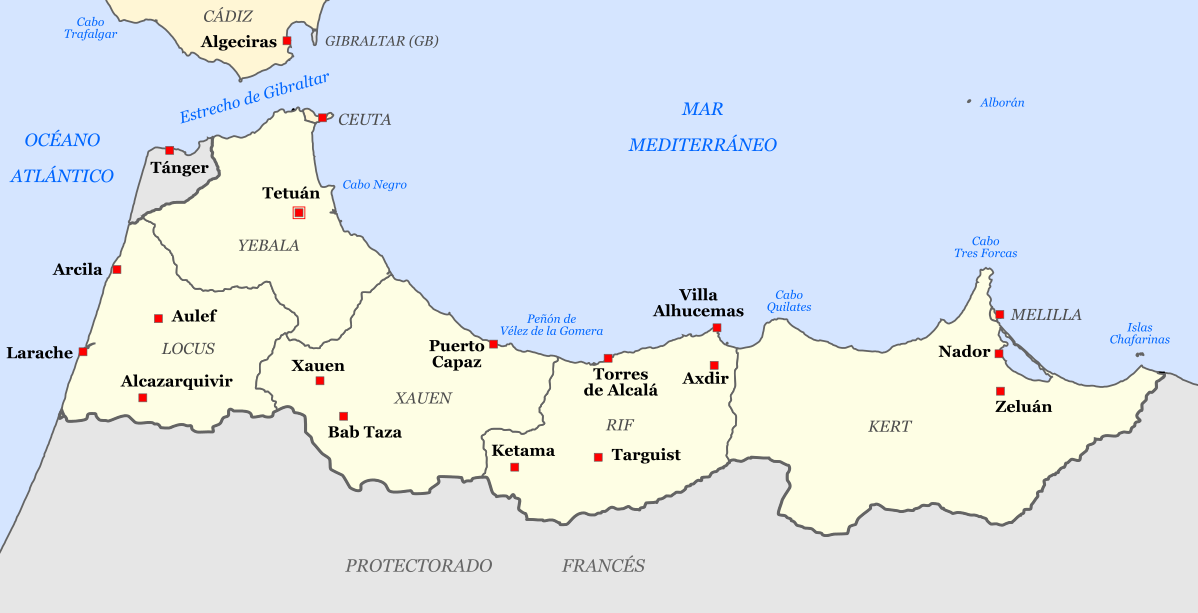 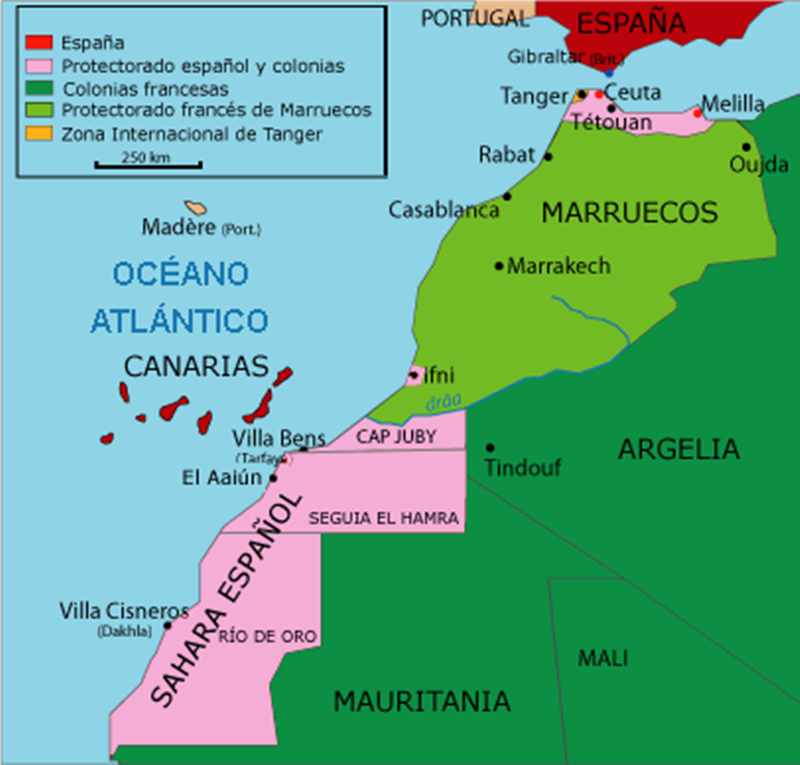 In a convention dated June 27, 1900, France and Spain agreed to recognize separate zones of influence in Morocco, but did not specify their boundaries. In 1902, France offered Spain all of Morocco north of the Sebu River and south of the Sous River, but Spain declined in the belief that such a division would offend Britain. The British and French, without any Spanish insistence, declared Spain’s right to a zone of influence in Morocco in Article 8 of the Entente cordiale of April 8, 1904.

“The two Governments, inspired by their feeling of sincere friendship for Spain, take into special consideration the interests which that country derives from her geographical position and from her territorial possessions on the Moorish coast of the Mediterranean. In regard to these interests the French Government will come to an understanding with the Spanish Government. The agreement which may be come to on the subject between France and Spain shall be communicated to His Britannic Majesty’s Government.“

“The two Governments agree that a certain extent of Moorish territory adjacent to Melilla, Ceuta, and other presides should, whenever the Sultan ceases to exercise authority over it, come within the sphere of influence of Spain, and that the administration of the coast from Melilla as far as, but not including, the heights on the right bank of the Sebou shall be entrusted to Spain.“

The British goal in these negotiations with France was to ensure that a weaker power (Spain) held the strategic coast opposite Gibraltar in return for Britain ceding all interest in Morocco. France began negotiating with Spain at once, but the offer of 1902 was no longer on the table. Since France had given up her ambitions in Ottoman Libya in a convention with Italy in 1903, she felt entitled to a greater share of Morocco.

On October 3, 1904, France and Spain concluded a treaty that defined their precise zones. Spain received a zone of influence consisting of a northern strip of territory and a southern strip. The northern strip did not reach to the border of French Algeria, nor did it include Tangier, soon to be internationalized. The southern strip represented the southernmost part of Morocco as recognized by the European powers: the territory to its south, Saguia el-Hamra, was recognized by France as an exclusively Spanish zone. The treaty also recognized the Spanish enclave of Ifni and delimited its borders.

In March 1905, the German kaiser, Wilhelm II, visited Tangier, a city of international character in northern Morocco. There he loudly touted Germany’s economic interests in Morocco and assured the sultan of financial assistance in the event of a threat to Moroccan independence. At Wilhelm’s urging, Sultan Abd el Aziz called for an international conference. The final act of the Algeciras Conference (April 7, 1906) created the State Bank of Morocco, guaranteed the attending powers equal commercial rights in Morocco and created a native Moroccan police force led by French and Spanish officers.

The final Spanish zone of influence consisted of a northern strip and a southern strip centered on Cape Juby. The consideration of the southern strip as part of the protectorate back in 1912 eventually gave Morocco a solid legal claim to the territory in the 1950s. While the sparsely populated Cape Juby was administered as a single entity with Spanish Sahara, the northern territories were administered, separately, as a Spanish protectorate with its capital at Tetuán.

The Protectorate system was established in 1912. The Islamic legal system of qadis was formally maintained.

Prior to the establishment of the protectorates, the postal services in Morocco comprised offices abroad from France, Germany, Great Britain and Spain and an internal postal service known as the Sharifian post. Spanish stamps had been used in the region since 1860. The Spanish post offices in Morocco began using Spanish stamps overprinted CORREOS ESPAÑOL MARREUCOS in 1903 (Scott 1-25). These continued in use until 1914; after special stamps for the protectorate began to be issued, the CORREOS ESPAÑOL overprints were used only in Tangier.

Once the protectorate of Spanish Morocco was formed, the Spanish set up a regular postal service starting from the Spanish offices. This service gradually absorbed most of the existing services. The Sharifian post offices throughout Morocco merged with the French offices in 1913, the stamps issued by the Sharifian post being valid for use in both French and Spanish Morocco until 1915.

The first stamps of the protectorate were Spanish stamps overprinted MARREUCOS in 1914 (Scott #26-38). The following year, the overprinted was changed to PROTECTORADO ESPAÑOL EN MARREUCOS (Scott #39-51) and in 1916-1920, Spanish stamps were overprinted ZONA DE PROTECTORADO ESPAÑOL EN MARREUCOS (Scott #52-65). Various surcharges followed, with stamps perforated through their middles, occasionally on revenue stamps, until Spanish Morocco released a set of pictorials in 1928 inscribed the same as the last overprint (Scott #93-107).

The Moroccan Sephardi Jews — many of them living in this part of the Maghreb after being expelled from Spain and Portugal in 1492 and 1497 respectively after the end of the Reconquista process — flourished in commerce, profiting from the similarity of Spanish and Ladino language and benefiting from the tax-exempt area in Tangier and a flourishing trading activity in the area.

Following the First World War, the Republic of the Rif, led by the guerrilla leader Abd el-Krim, was a breakaway state that existed from 1921 to 1926 in the Rif region, when it was subdued and dissolved by joint expedition of the Spanish Army of Africa and French forces during the Rif War.

The Spanish lost more than 13,000 soldiers at Annual in July–August 1921. Controversy in Spain over the early conduct in the war was a driving factor behind the military coup by General Miguel Primo de Rivera in 1923 which foreshadowed the Spanish Civil War of 1936–1939.

After the successful 1925 Alhucemas landing, the French–Spanish alliance ended up achieving victory and putting an end to the war.

The Spanish Civil War started in 1936 with the only partially successful coup against the Republican Government, which began in Spanish Morocco by an uprising of the Spanish Army of Africa stationed there, although within a day uprisings in Spain itself broke out. This force, which included a considerable number of Moroccan troops (regulares), was under the command of Francisco Franco (who spent much time in Morocco) and became the core of the Spanish Nationalist Army. The Communist Party of Spain and Workers’ Party of Marxist Unification (POUM), advocated anti-colonial policies, and pressured the Republican government to support the independence of Spanish Morocco, intending to create a rebellion at Franco’s back and cause disaffection among his Moroccan troops. The government — then led by the Spanish Socialist Workers’ Party (PSOE) — rejected that course of action as it would have likely resulted in conflict with France, the colonial ruler of the other portion of Morocco.

Because the locally recruited Muslim regulares had been among Franco’s most effective troops, the protectorate enjoyed more political freedom and autonomy than Francoist Spain-proper after Franco’s victory. The area held competing political parties and a Moroccan nationalist press, which often criticized the Spanish government.

Spanish troops provisionally occupied Tangier during World War II, on the pretext that an Italian invasion was imminent.

In 1956, when France ended its protectorate over Morocco, Spain discontinued the protectorate and retroceded the territory to the newly independent kingdom, while retaining the plazas de soberanía which were part of Spain prior to the colonial period, Cape Juby, Ifni, and other colonies (such as Spanish Sahara) outside of Morocco. Unwilling to accept this, the Moroccan Army of Liberation waged war against the Spanish forces. In the 1958 Ifni War, which spread from Sidi Ifni to Río de Oro, Morocco gained Tarfaya (the southern part of the protectorate) and reduced the Spanish control of the Ifni territory to the perimeter of the city itself. In 1969, through negotiation, Morocco obtained Ifni as well.

Scott #145 was released in 1935. The 2-centavo green stamp, printed by photogravure and perforated 14, features a view of Xauen. This is Morocco’s famous “blue city”, Chefchaouen or Chaouen as it’s called by Moroccans (شفشاون‎‎ — Shafshāwan in Arabic, ⴰⵛⵛⴰⵡⵏ — Ashawen in Berber), the chief town of the northwestern province of the same name and is noted for its buildings in shades of blue.

Chefchaouen is situated in the Rif Mountains, just inland from Tangier and Tetouan. The city was founded in 1471, as a small fortress which still exists to this day, by Moulay Ali Ben Moussa Ben Rached El Alami (a descendant of Ibn Machich and Idris I, and through them, of the Islamic prophet Muhammad) to fight the Portuguese invasions of northern Morocco. Along with the Ghomara tribes of the region, many Moriscos and Jews settled here after the Spanish Reconquista in medieval times. In 1920, the Spanish seized Chefchaouen to form part of Spanish Morocco. Spanish troops imprisoned Abd el-Krim in the kasbah from 1916 to 1917, after he talked with the German consul Dr. Walter Zechlin. After defeating him with the help of the French, Abd el-Krim was deported to Réunion in 1926. Spain returned the city after the independence of Morocco in 1956.

Chefchaouen is a popular tourist destination because of its proximity to Tangier and the Spanish enclave of Ceuta. There are approximately two hundred hotels catering to the summer influx of European tourists. It is a popular shopping destination as well, as it offers many native handicrafts that are not available elsewhere in Morocco, such as wool garments and woven blankets. The goat cheese native to the area is also popular with tourists.

The countryside around it has a reputation for being a prolific source of kief. The Chefchaouen region is one of the main producers of cannabis in Morocco. Hashish is subsequently sold all over town, but is mostly the domain of native Chaouenis. A nearby attraction is the Kef Toghobeit Cave which is one of the deepest caves in Africa.

Chefchaouen’s blue walls are a popular subject of interest. There are several theories as to why the walls were painted blue. One popular theory is that the blue keeps mosquitos away, another is that Jews introduced the blue when they took refuge from Hitler in the 1930s. The blue is said to symbolize the sky and heaven, and serve as a reminder to lead a spiritual life. 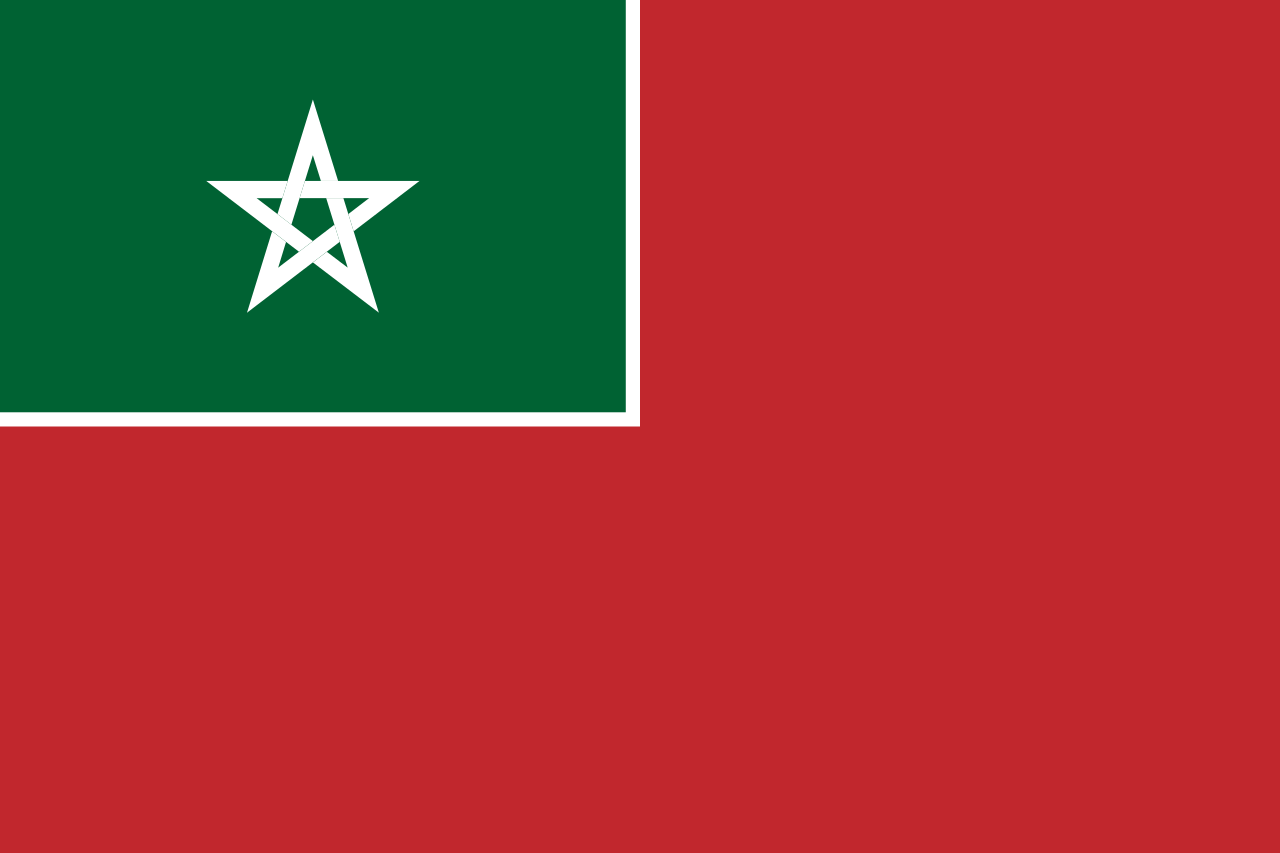 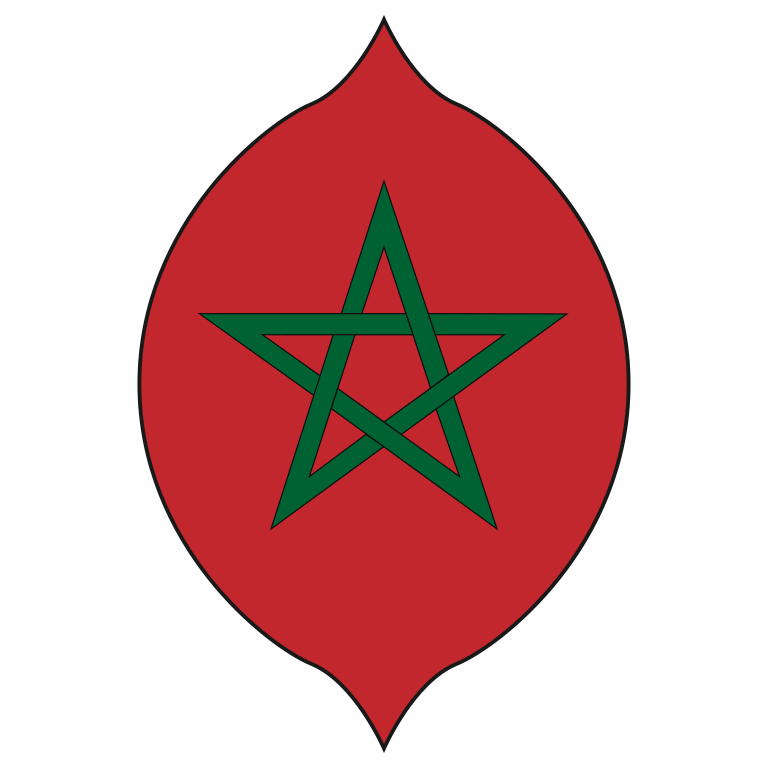