On September 28, 1917, the Rattanakosin Kingdom (popularly known then as Siam and renamed Thailand in 1939), adopted the current national flag consisting of shows five horizontal stripes in the colors red, white, blue, white and red, with the central blue stripe being twice as wide as each of the other four. In Thai, the flag is called Thong Trairong (ธงไตรรงค์), meaning “tricolor flag”. Beginning in 2017, September 28 is to be officially recognized as Thai National Flag Day (วันพระราชทานธงชาติไทย — Wan Phraratchathan Thongchat Thai).

I wrote a fairly short article about the Thai national flag for A Stamp A Day in 2016 which I have decided to reprint here as I can’t see where I can add to it. The previous article featured one of the two stamps issued to mark the 50th anniversary of the flag in 1967 (Scott #495). Amazingly enough, the 1967 stamps were the first issued by Thailand on which the flag appeared. I had hoped to illustrate this centennial article with the brand-new Thailand Post issue number TH-1133 which was released this morning in commemoration of the anniversary. However, none of the post offices near where I live have any stamps at all right now! I had many duplicates of Scott #2101, a flag definitive released in 2003 as well as mint copies of the two definitives released in August 2013 (Scott #2274-2275); I chose the higher denomination of the latter.

Scott #2275 (listed in Thai stamp catalogues as DEF-70, for definitive #70) is a 15-baht multicolored stamp printed in photogravure on granite paper and perforated 14. It was released on August 9, 2013, during the Thailand 2013 World Stamp Exhibition which marked the 130th anniversary of the first stamps to be issued by Siam. It was one of 40 stamps issued by the Kingdom that August (18 on August 9 alone) which, I believe, is the most during such a short period in its entire stamp-issuing history (only one stamp was released the following month).

Below is my 2016 article about the Thai flag:

“Thailand doesn’t have a formal Flag Day holiday but if it did, the date would be celebrated on September 28. That is the date in 1917 that the current flag — popularly called Thong Trairong (ธงไตรรงค์), or “tri-color flag” — was adopted by a royal decree issued by King Vajiravudh (Rama VI) and enacted into law by the Flag Act of B.E. 2460 (1917). The story goes that during the 1916 flood the king saw the national flag — red with a white elephant — hanging upside down. Because of the distress this caused him, a new flag was adopted that could not be hung upside down. On November 21, 1916, the Kingdom of Siam (the name Thailand wasn’t adopted until June 26, 1939) replaced the elephant with two horizontal white stripes against a red background.

Between 1899 and 1909, Siam had lost portions of its territory — including present-day Laos, Cambodia and its four southernmost provinces — to European powers. It was still the sole country in Southeast Asia to maintain full independence from the great empires during the colonial era. When World War I broke out in Europe, King Vajiravudh decided to take the side of the Allied Powers because he to revise the unequal treaties. He also wanted to confirm his supremacy as the head of the nation, a status that had been challenged by elements of the military in the Palace Revolt of 1912.

On July 22, 1917, Siam declared war on Germany and Austria-Hungary. Twelve German vessels docked in Siamese ports were immediately seized. It was the only state in the region to enter the conflict entirely of its own free will and as an equal of the European powers rather than as part of their imperial contingents. As a clear symbol of the new two-track strategy of active association with the world powers and of renewal and restructuring within the nation, the king authorized a re-design of the national flag.

The new flag appeared on September 28, 1917, with the middle stripe changed to dark blue to show solidarity with the Allies during the war — the colors now matching the red, white and blue of the flags of Great Britain, France, Serbia, Russia, and the United States. The dark blue stripe is twice as wide as the red and white stripes, was similar in tone to indigo which at the time was regarded as the auspicious color for Saturday, the day King Vajiravudh was born. Although not an official interpretation of the flag, the prevailing view is that the central blue stripe represents the monarchy, the two white stripes are the Therevada Buddhist religion, and the outer red stripes represent the land or the nation.

Initially, two variants of the flag were common: the minimalist five horizontal bands and a variant maintaining the continuity and prestige of the old flag with the traditional white elephant symbol on a red disc — from the old flag — superimposed over the new stripes. This variant is still the flag of the Royal Thai Navy. When the Siamese Expeditionary Force marched in the 1919 victory parade following World War I, it was behind the hybrid flag.

The Flag Act of B.E. 2522 (1979) stipulates the design of the national flag as “a rectangle 6 portions in width and 9 portions in length, vertically divided into five full-length horizontal stripes: at the middle, a blue stripe 2 portions wide; flanking the blue stripe, two white stripes 1 portion wide each; and outwardly flanking the white stripes, two red stripes 1 portion wide each. The flag shall also to be known as the Trairanga.” The colors of the flag were standardized in a convention held by the National Identity Office on May 7, 2010, and are pending formal adoption as a Thai Industrial Standard. The adopted specifications using the Munsell color system are value 5R4/12 for the red, and 7.5PB2/4 for the blue. The proportion is 2:3 and the flag is not only the national flag but also the civil and state ensign. The first rules governing the usage of Siamese flags appeared in Royal Decree issued in April of the year R.E. 110 (B.E. 2434) (1891) and were entitled, “Regulations pertaining to the use of various types of Siamese flag.” Subsequently, as more and more flags were created, these regulations were amended with the latest being the Decree on Flags issued on April 22, 1979.

The flag is raised daily at 8:00 a.m. and lowered at 6:00 p.m in all public areas (e.g. schools, workplaces, public buildings), This is accompanied by the Thai national anthem (Phleng Chat Thai — เพลงชาติไทย), the original lyrics of which were composed a few days after the 1932 coup and officially adopted on December 10, 1939, when the country’s name changed from Siam to Thailand. The anthem is broadcast on all television and radio stations nationwide during those two times and Thai people stop whatever they are doing to stand and show respect for the nation. Similarly, the Royal anthem (Sanrasoen Phra Barami — สรรเสริญพระบารมี) is played prior to many events such as movies and concerts and all in attendance are expected to stand and show respect for the monarchy. Those who don’t — including foreigners — are occasionally arrested under criminal charges of lèse majesté based on Thai Criminal Code section 112, making it illegal to defame, insult or threaten the king, queen, heir-apparent or regent, This has been enforced since 1908. The punishment is three to fifteen years of imprisonment per count. There is, however, no legal definition of what actions constitute a defamation, insult or threat against the monarchy, and there is plenty of room for interpretation. The Royal anthem was the national anthem of Siam until 1932.

To mark the 50th anniversary of the adoption of the national flag, Thailand issued a pair of stamps on December 5, 1967 (the birthday of HRH King Bhumiphol Adulyadej, or Rama IX). Scott #495 is denominated 50 satang (one-half of one baht) and was produced using the photogravure method in sheets perforated 13½. The colors used are greenish blue, red and violet blue. It’s companion 2 baht stamp (Scott #496) was printed in gray, red and violet blue.” 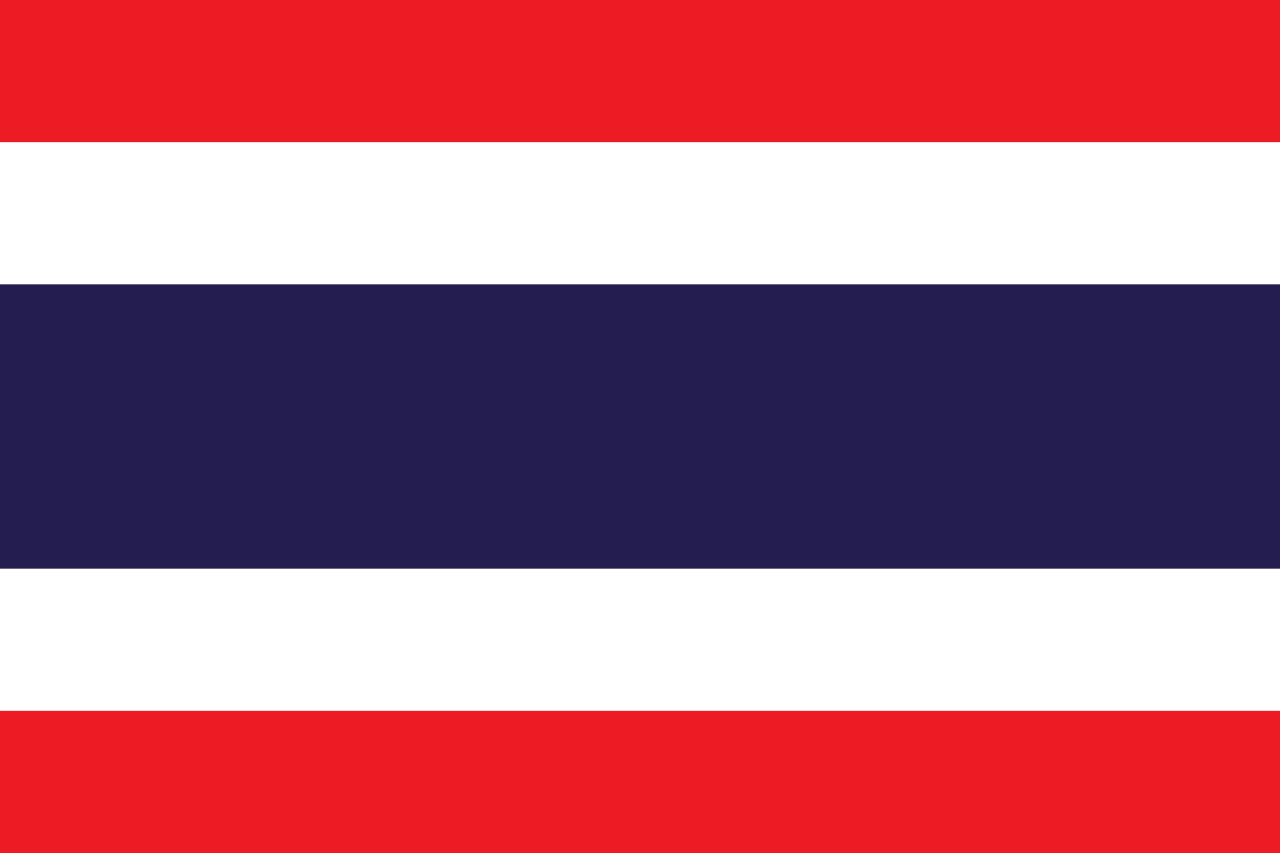 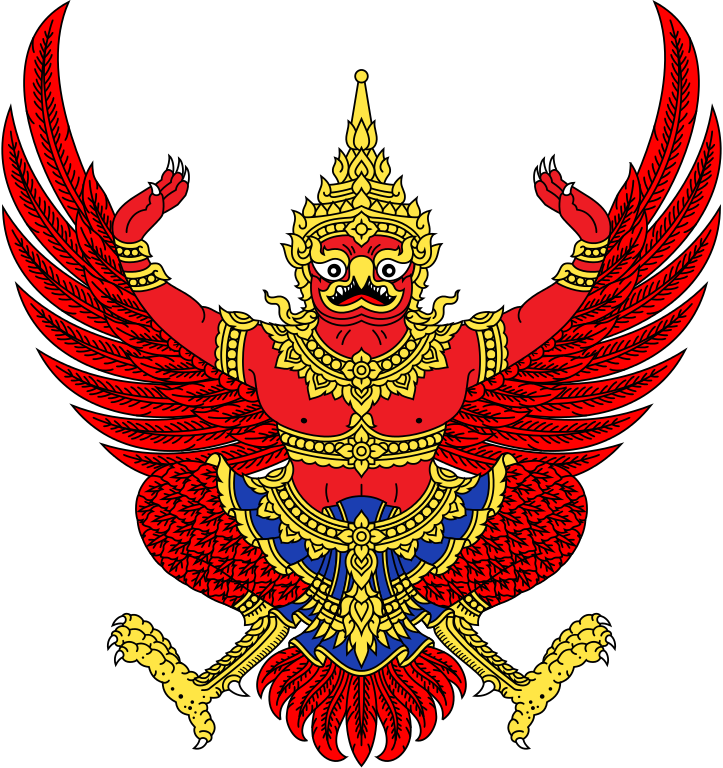