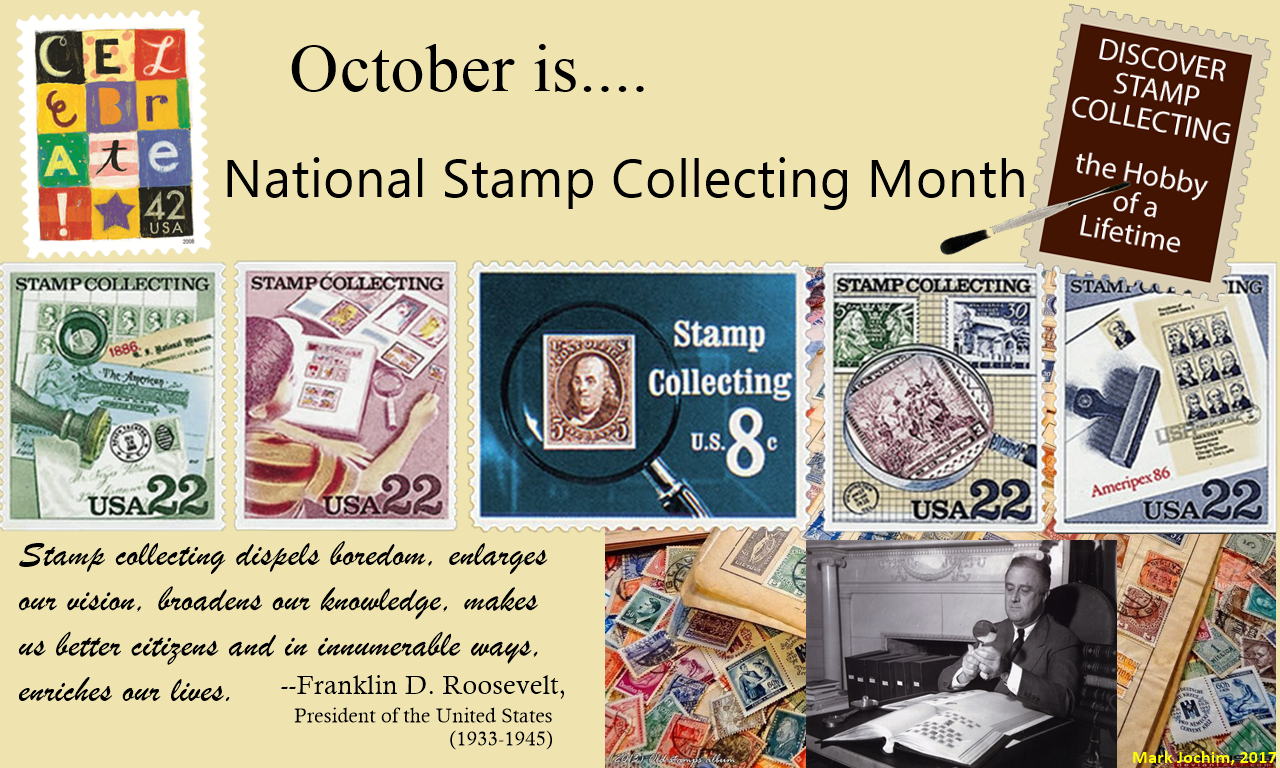 Since 1981, the month of October has been celebrated as National Stamp Collecting Month in the United States and Canada. November is National Stamp Collecting Month in the Philippines. I began collecting stamps around the age of nine years old; counting a few breaks for other pursuits (girls, music, travel to name but three), I estimate that I have been involved in the hobby for a little more than 30 years. I promote it whenever and wherever I can these days, having begun collecting again following my move to Thailand more than a decade ago.

Stamp collecting as a hobby has been portrayed on numerous stamps; I featured Scott #1474 of the United States on last year’s ASAD post marking National Stamp Collecting Month and another of my favorites — U.S. Scott #2198 — in an article earlier this year detailing the establishment and history of the United States Post Office Department. Collecting examples of “philately on stamps” (as opposed to “stamps on stamps”) is one of my favorite topicals.

My interest in stamp collecting was renewed not long after I moved to the island province of Phuket. In the midst of celebrations marking the 60th anniversary of the accession to the throne by His Majesty the late King Bhumibol Adulyadej (Rama IX), I discovered the government-run philatelic museum in the island’s main town. While the museum never impressed me (and it has become even more dismal in the ensuing years), the stamp shop within impressed me. The dedicated room was loaded with Thai stamps and first day covers going back to the 1970s (all sold at face value!) as well as selections of albums and other supplies.

I fell in love with the beautiful Thai stamp issues (made even more attractive by the low denominations, small sheet sizes, and the relatively few new releases each year) and soon began regular visits to Phuket Town in order to buy stamps. Following my divorce, I moved into town from my previous home in the southern part of the island and was then only a ten-minute or so walk from the Phuket Philatelic Museum. I loved visiting every month or so to make my new issue purchases and chat with the clerk who spoke excellent English.

About three years ago, the dedicated room was moved to a counter in the museum’s lobby (most of the older stamps as well as the supplies were removed from sale). They needed the space to build Thailand’s first (and only, I believe) drive-through post office. The English-speaking clerk was reassigned and her replacement just couldn’t communicate outside of the Thai language (which I still struggle with), although she tried to be as helpful as she could. My visits became less frequent, mainly due to work commitments.

A few weeks ago, I found myself with an afternoon off and planned to venture to the museum in order to get caught up on all of the Thai stamps released since last November (my last visit!). It had rained all morning while I was at work but had stopped by the time I boarded a bus for Phuket Town. I didn’t it was underwater until we made our progress through increasingly flooded streets. Finally, the bus stopped a few miles from my home and I saw high water where it had never flooded before. Floods used to be a common occurrence here until they cleared vegetation and trash from the various canals that snake through the town. On this particular day, hard rain in the morning completely overwhelmed the drainage systems and the water began to rise.

By the time I neared my home, the water was to my knees. The canal running just to the west of my small lane was a few inches from breaching. There was no way I could make it to the Philatelic Museum that day; knowing that it lies right on the banks of one of the canals made me wonder how it was faring. It started to rain again shortly after I arrived home and all afternoon I watched news reports of the flooding in the town. It was completely inundated and the provincial governor later called it the worst-ever flooding on record for the island.

I was able to visit the museum a week later. It seemed dry and I didn’t notice any high-water lines on the exterior walls. The lady inside, however, gave me some very bad news: “Stamps finish,” she said in broken English. “Only have first day cover.” The covers were mostly from 2014 and 2015; I purchased several that I didn’t already have. The clerk couldn’t tell me if this was a temporary situation or that they would no longer sell any stamps at all. I’ll check back soon.

I’m worried that the museum itself might close down as I believe the sales counter was the only income source. There’s a meeting room that I believe used to be used by a local stamp club but I could never get any information about meetings, etc. I’ve had ideas in the past to organize a Postcrossing meeting there amongst members who live on the island or to form my own stamp club, but I just haven’t had the time.

I am now unable to purchase any Thai stamps locally; one visit to a nearby post office left me wondering if the two clerks on duty even knew what a stamp was! I will have to rely on mail order until I am able to check the other post offices on the island. It’s a shame as there have been some very interesting stamps issued by Thailand recently. I am looking forward to finding out what Thailand Post has planned to mark the one-year anniversary of King Bhumibol’s death; there’s already been an extensive series of banknotes and coins announced by the Royal Thai Mint. 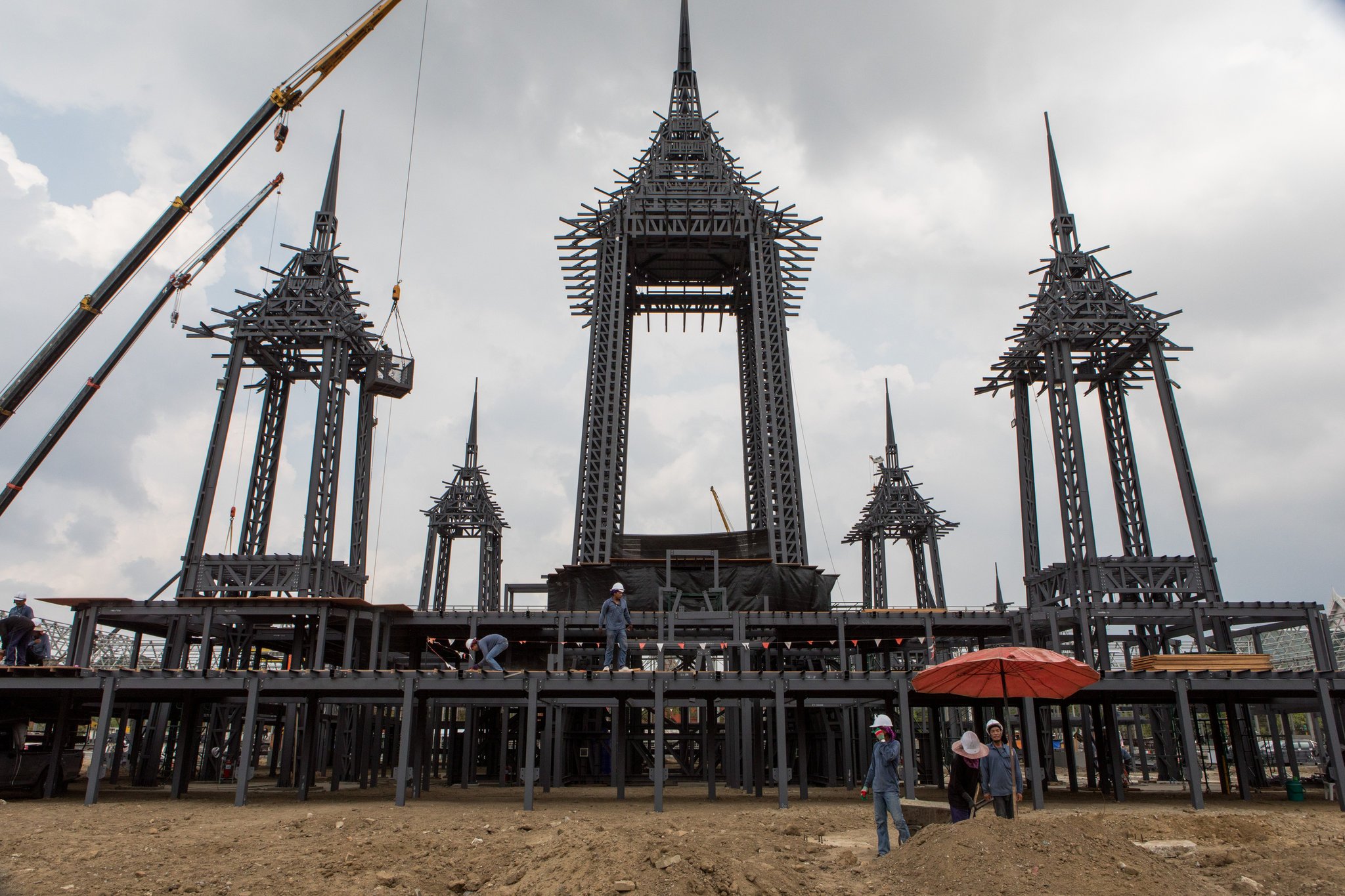 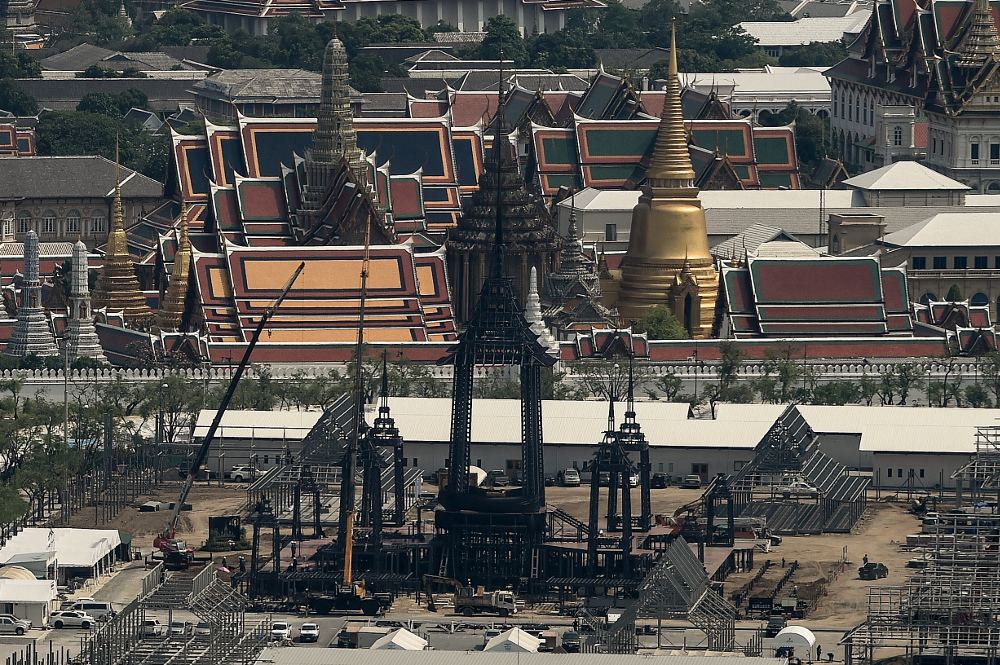 I had originally planned to make a post about National Stamp Collecting Month today using a “philately on stamps”-themed stamp and then scatter a few throughout the month. However, I was reminded late last night of the resumption of “mourning protocols” here in Thailand when a number of websites went black and white (including Facebook and YouTube). The Royal Funeral for the late King Bhumibol will occur at the end of October, following a year of mourning (which has just been extended for an additional 15 days).

The whole of October will be a period of intensified mourning in Thailand. The initial period lasted from his death on October 13, 2016, to the beginning of December (his birthday) when his son formally accepted the succession and became King Rama X. 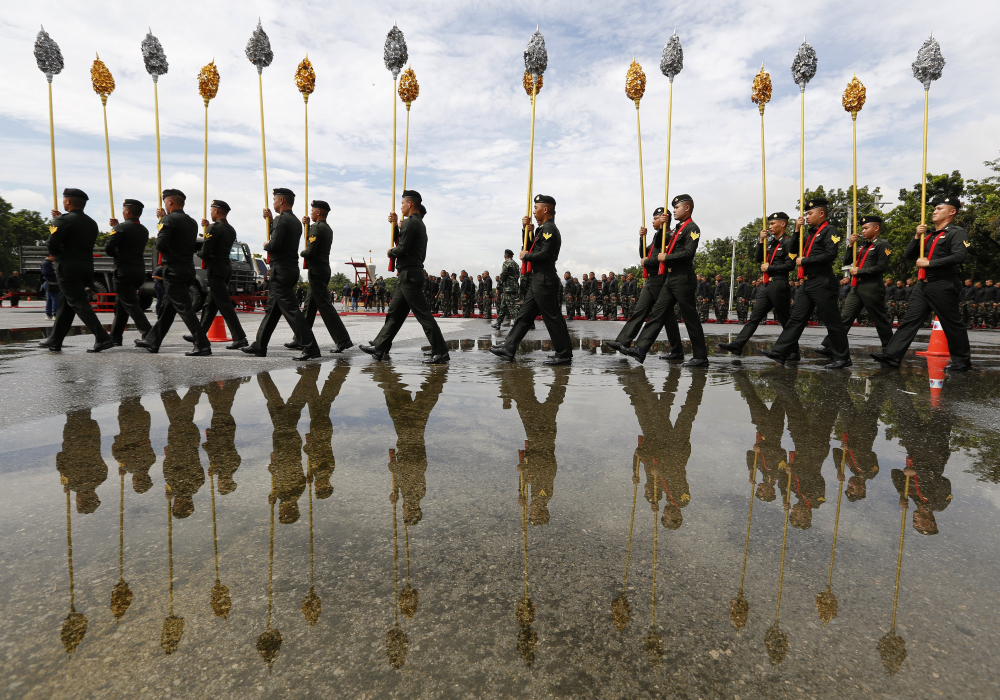 While a number of people have remained wearing black for the entire year (including all teachers such as myself), it will once again be expected in public starting today. Since midnight last night, all Thai television stations are broadcasting in black and white only; most of my Thai friends have changed their Facebook profile and cover photos to grey-scale today. The public are requested not to engage in any festivities during the month of October and many entertainment and sporting events will be canceled. Starting on October 20, all television stations in Thailand have to stop airing entertainment shows and from October 21-24 will only air programs about King Bhumibol. From October 25-29, only his funeral will be aired.

I have decided to combine my promotion of National Stamp Collecting Month (as an American living in Thailand, I feel I can choose which holidays to celebrate and this is mine!) with my deference and empathy towards the national mourning of the great Thai king.

For A Stamp A Day, I plan to feature a different Thai stamp each day of October focusing primarily on those featuring His Majesty the late Bhumibol Adulyadej, King Rama IX the Great. I will begin with the various definitive series (although I am missing a few) and continue with some of my favorite commemoratives. For the majority of the posts, I will keep the commentary down to the bare minimum as there have already been a number of ASAD articles detailing various aspects of Thai history and of King Bhumibol’s life. I hope that this will give me some extra writing time (and energy) to devote to a few general stamp collecting articles for my other stamp blog, Philatelic Pursuits.

Today’s post features Scott #264 which was actually the first stamp to be released bearing the image of King Bhumibol, the lead-off stamp in what is called the Rama IX 1st Series among collectors in Thailand. The 5-satang purple stamp was issued on November 15, 1947 (along with a 20-satang chocolate denomination in the same series, Scott #266), some two weeks before a set of four crudely-printed stamps were released to mark the young king’s coming of age on December 5, his 20th birthday (Scott #260-263). Six stamps ranging in value from 1 to 20 baht in the the 1st Series were released on November 1, 1948 (Scott #268-273), while the remaining two stamps in this definitive set appeared on January 3, 1949 (10 satang, Scott #265, and 50 satang, Scott #267).

Renamed Thailand in 1939, the first stamps inscribed as such in English appeared in 1940. This first Rama IX definitive series has the inscription SIAM in English but the Thai inscription translates to Thailand! The same inscriptions also appeared on the 1947 coming of age set. The next stamp to be released were those marking King Bhumibol’s coronation on May 5, 1950, and featured the Thai and English inscriptions bearing the name THAILAND (Scott #275-282).

The unwatermarked stamps of the Rama IX 1st Series were engraved by Waterlow and Sons Limited of London and perforated 12½. The four single-color satang denominations measure 20×25 millimeters while the six baht values are slightly larger at 22x27mm and are bi-colored. In 1955, the 20-satang chocolate was surcharged in new values — 5 satangs in black ink and 10 satangs in carmine (Scott #302-303). 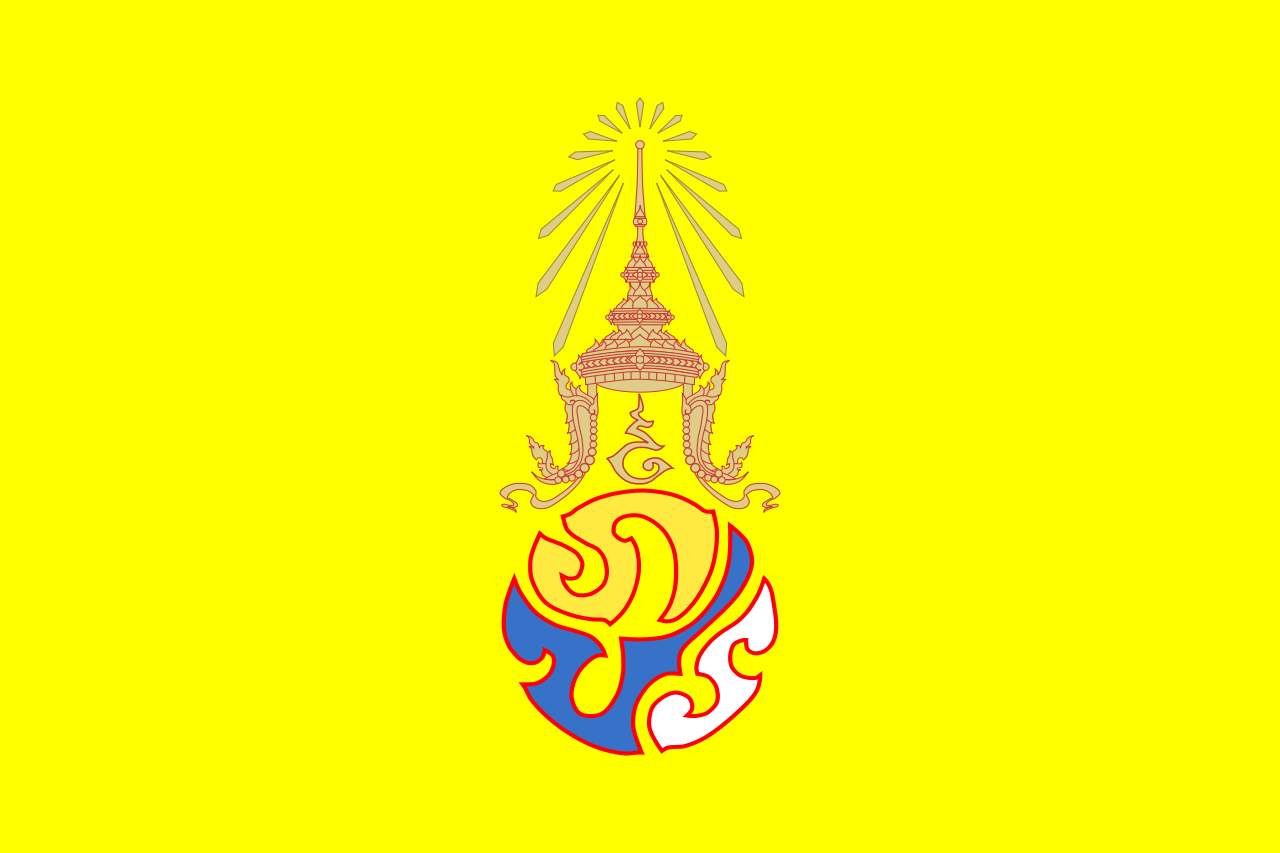 One thought on “October Is National Stamp Collecting Month”