In 1993, His Majesty the late King Bhumibol Adulyadej, Rama IX, became the world’s first sitting monarch to be granted a patent. This was granted for an aerator used in waterway treatment. The device, referred to as the Chaipattana Low Speed Aerator (Model RX-2) is a machine with a paddle wheel attached to a floating buoy that adds oxygen to water though the moving of the water with the paddle scoops. Thailand’s Department of Intellectual Property granted the patent to His Majesty on February 2, 1993, a date since marked as the country’s Inventors’ Day. This invention was the first of 20-plus patents and 19 trademarks registered by His Majesty, who was also an outstanding artist with a portfolio of more than 1,000 works, including paintings, photos, music and literary works.

I have a personal association with the Chaipattana Low Speed Aerator due to my being enlisted to be one of four carriers of a full-sized machine during the Opening Ceremonies parade of one of Phuket’s annual provincial sports days. In 1996, the country celebrated the 50th anniversary of His Majesty’s accession to the throne and the Communications Authority of Thailand (CAT) issued a number of stamps in his honor. The fourth set to be released that year consisted of five 3-baht stamps released on June 9 portraying a few of King Bhumibol’s Royal Development Projects (Scott #1669-1673). A souvenir sheet was also issued at the same time (Scott #1673a). The stamps were printed by Thai British Security Printing Public Co. Ltd. in Bangkok using lithography on paper watermarked with wavy interlocked lines and perforated 13½. One of the stamps — Scott #1671 portraying one of the king’s rain-making programs — contains a holographic image that the Scott catalogue notes may be damaged through soaking (it doesn’t seem to be, in my experience). 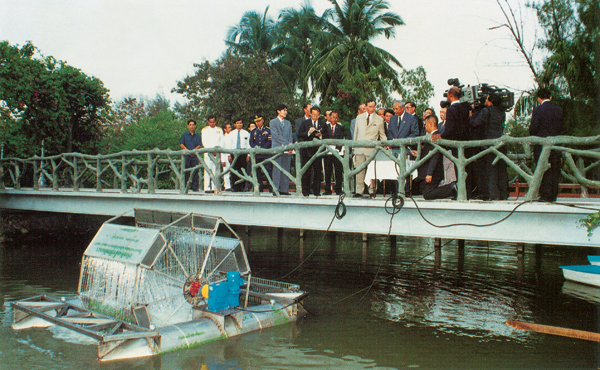 “The development of the country must be fostered in stages. It must start with the construction of infrastructure, that is, the provision of food and basic necessities for the people by methods which are economic, cautious and conforming with principles. Once the foundation is firmly established, progress can be continually, carefully and economically promoted. This approach will prevent incurring mistakes and failures, and lead to the certain and complete achievement of the objectives.”

His Majesty was involved in many social and economic development projects. The nature of his involvement varied by political regime. The government of Plaek Phibunsongkhram (1951–1957) limited the king to a largely ceremonial role. In 1955, he began to develop various techniques for artificial rain-making after observing that people in the northeastern region of Thailand known as Isaan were poverty-stricken due to droughts and floods.King Bhumibol’s rain-making inventions won him the title of “Father of Royal Rain-making”.

During the the military governments of Sarit Thanarat and his successors (1958–1980), King Bhumibol was portrayed as the “development King” and the inspiration for the economic and political goals of the regime. Royally-ordered projects were implemented under the financial and political support of the government, including projects in rural areas and communities under the influence of the Communist Party of Thailand. The king’s visits to these projects were heavily promoted by the Sarit government and broadcast in state-controlled media.

During the governments of General Prem Tinsulanonda (1981–1987), the relationship between the Thai state and the monarch was at its closest. Prem, later to become President of Bhumibol’s Privy Council, officially allocated government budgets and manpower to support royal projects. Most activities in this period involved the development of large-scale irrigation projects in rural areas. 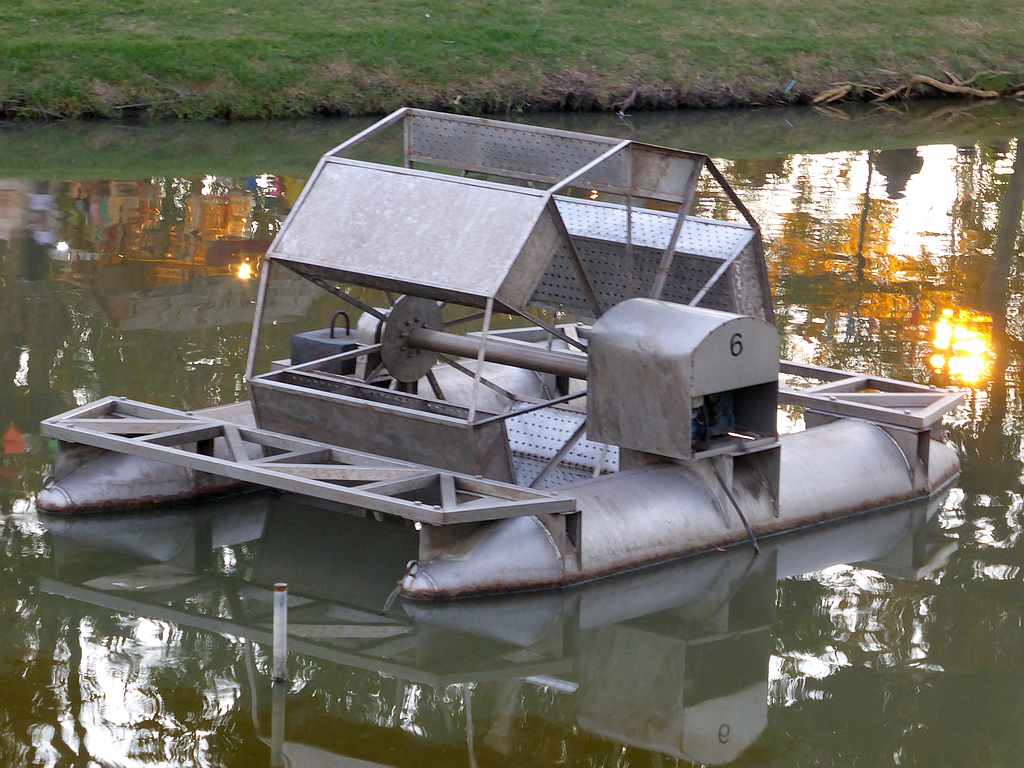 Another important contribution to Thailand’s energy sector came in 1985, when the king launched the production of bio-diesel as a way of reducing dependence on imported energy. He suggested that a mixture be created of conventional diesel with locally available palm oil with the latter accounting for 5 per cent of the fuel content. His formula for this bio-diesel works well with all types of diesel-run engines, without any need to have them modified. The formula of the bio-fuel, which is also environmentally friendly, was patented in October 2002 at a time when rising fuel costs became a burden on the poor, who benefited from the alternative and cheaper energy source.

After 1988, the structured development of the royal projects reached its apex. King Bhumibol’s Chaipattana Foundation was established, promoting his “sufficiency economy” theory, an alternative to the export-oriented policies adopted by the period’s elected governments. Following the 2006 coup, establishment of a “sufficiency economy” was enshrined in the constitution as being a primary goal of the government, and government financial support for royal projects was boosted. 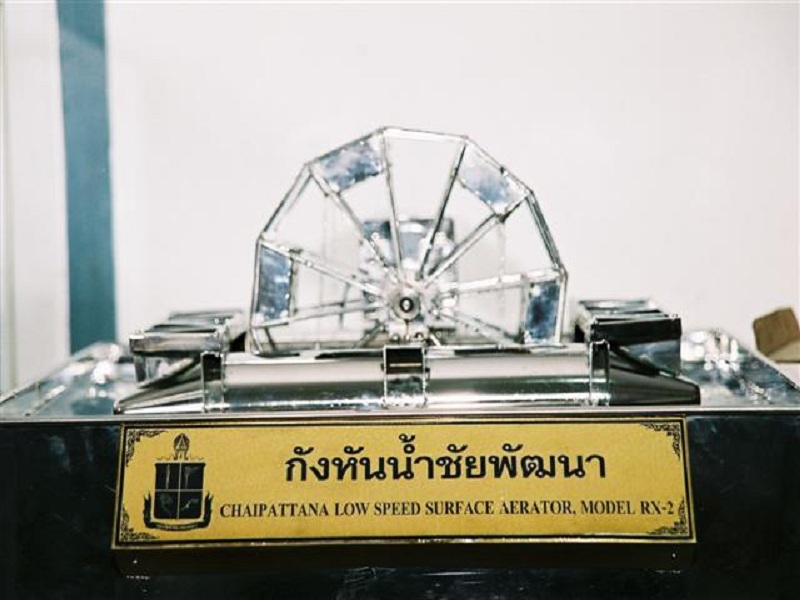 King Bhumibol also invented a computer program for Devanagari characters — or Pasa Khaek — as well as a comprehensive garbage eradicator, which not only incinerates garbage but also produces ash that can be used for construction and gas that can be converted into electricity. He also designed a mist collector which provides effective support for reforestation efforts in highland areas by helping to solve regional water shortages.

In the early 1990s, the king combined his keen interests in mechanisms, motors, and vehicles and his strong desire to help the Thai people by cleaning the increasingly polluted waters of his country by developing an oxygen-enhancing device. The Chaipattana aerator treats polluted water by enhancing the amount of oxygen to boost the function of bacterium in decomposing any organic matters in the water, clearing away the cause of deterioration. The aerator has been designed to allow the water to have some contact with the air. Each of its spraying paddles plunges into the water and lets it seep through the holes as the paddles rotate upwards into the air. Such rotation helps add the amount of oxygen and thus purify the water. The aerator produces some waterflow to enrich the water with air (which consists of approximately 21 % oxygen). 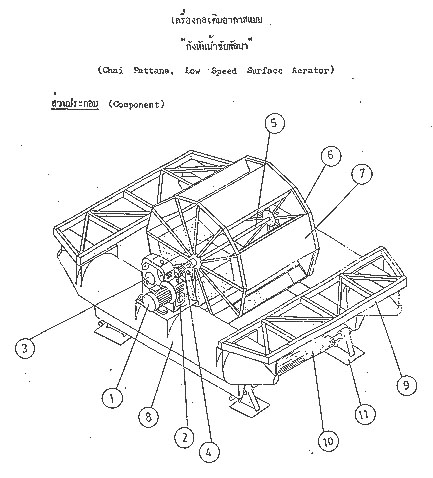 The Model RX-2 consists of two wheels between which six baskets are mounted. The baskets are open on top and have a lot of small holes along the walls and on the bottom. This ensures that, when the wheels turn, the baskets are filled quickly when diving into the water and empty slowly in a lot of thin water jets, maximizing its efficiency by creating turbulence in the water. Another model of the aerator, RX-5, was patented in 2001.

According to Dr Sumet Tantivejakul, secretary-general of the Chaipattana Foundation, King Bhumibol invented the aerator after observing how the problem of polluted water in canals and other sources affected people’s well-being. “His Majesty the King granted the mechanical aerator and directed the Chaipattana Foundation to provide funds for research in connection with the information with a view to increasing the level of oxygen in water and cutting down pollution. 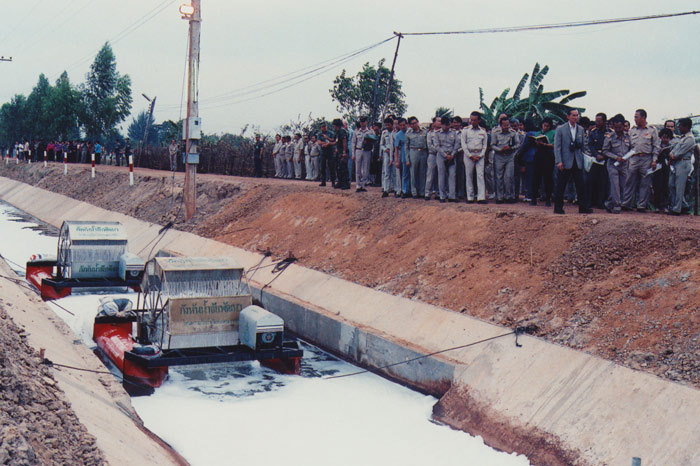 “In the initial stage, His Majesty introduced a pilot-model of the Chaipattana Aerator at Bowonniwet Wihan Temple. The model worked so well that it resulted in on-going development and application in several areas. This evidenced his genius for developing concepts in ways that are simple enough for them to be widely applied, while at the same time bringing about remarkable results. This could only happen due to His Majesty’s great erudition and amazing command of a full range of relevant aspects of each issue,” Dr Sumet said.

In 2000, the Chaipattana aerator earned international recognition when the Belgian Chamber of Inventors presented King Bhumibol with the “Gold Invention Award” at the Eureka Exhibition held in Brussels that year due to the aerator’s value in terms of water treatment around the world. Later, a Chaipattana aerator was presented as a gift to Belgium and installed at Woluve Sainte-Pierre park in the heart of Brussels.

The citizens of Thailand owe a great deal to this royal invention as the procedure effectively alleviates the problem of water pollution, making the water became clearer, less foul and higher in oxygen amount. Aquatic animals such as turtles, soft-shelled turtles and fish can survive when the water quality meets the standard. 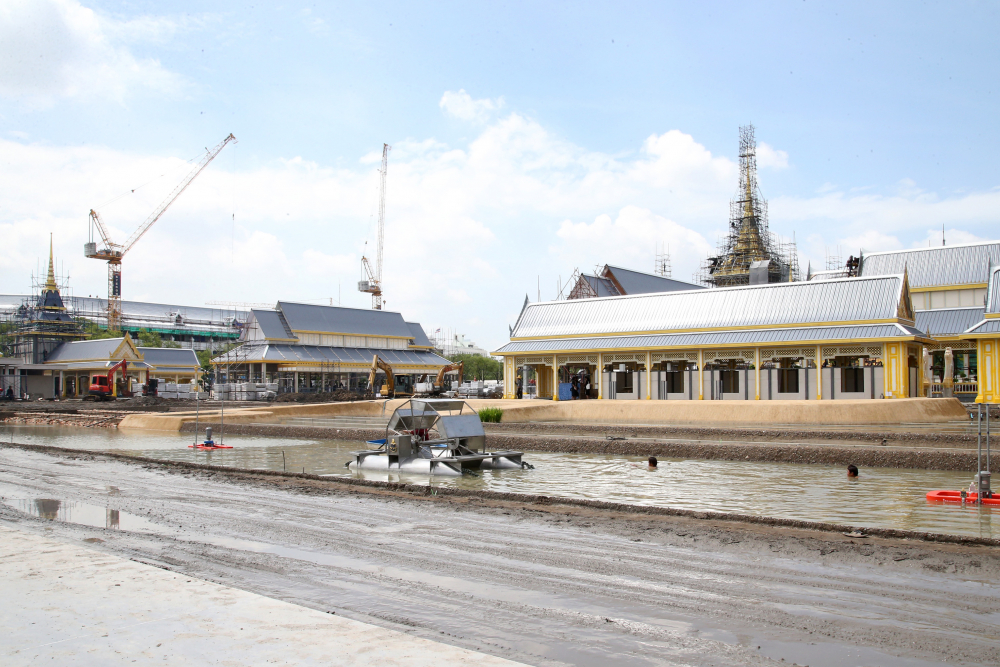 On August 30, 2017, a Chaipattana aerator was installed at the construction site of the Royal Crematorium on the Sanam Luang Ceremonial Grounds in Bangkok as one additional reminder of the important inventions of the king. His Majesty the late King Bhumibol’s funeral will be held from October 25-29, 2017, with the actual cremation taking place at 10:00 on the evening of October 26.