During my classes recently, I have asked Thai people of all ages if they know where His Majesty the late King Bhumibol Adulyadej, Rama IX, was born. I have received numerous answers of Thailand, Switzerland and even France but never the correct location of the United States of America. At 8:45 a.m. on a chilly Monday morning, December 5, 1927, a six pound baby boy was born at Cambridge Hospital (now Mount Auburn Hospital), in the U.S. state of Massachusetts. On duty that morning was Dr. W. Stewart Whittemore, who would remember the Siamese boy he delivered and recorded on his birth certificate “Baby Songkla.” The doctor told The Boston Globe in 1960 that “He was a very good baby, indeed.” His Majesty King Bhumibol Adulyadej is the world’s only monarch born in the United States.

Bhumibol was the youngest son of Prince Mahidol Adulyadej, the Prince of Songkla, and his commoner wife Mom Sangwan (later Princess Srinagarindra, the Princess Mother). He had an older sister, Princess Galyani Vadhana, and an older brother, Prince Ananda Mahidol.

Prince Mahidol Adulyadej had come to Cambridge in 1916 to study public health at Harvard University. It was here the prince met his wife, who was a Thai student studying nursing at Simmons College. She worked at local hospitals, including Mount Auburn and Boston Lying-in Hospital, now a part of Brigham and Women’s.

The couple left the United States for Thailand but returned to Massachusetts in 1926 so Prince Mahidol could attend Harvard Medical School. The future king, their third child, was born the following year, and the family moved to Brookline at 63 Longwood Avenue, staying until 1928. As king, Bhumibol returned to the Massachusetts twice, including a 1960 visit in which he met with state and local officials and several Mount Auburn nurses who attended to him after his birth.

Bhumibol first came to Thailand in 1928, after his father obtained a certificate from Harvard. Prince Mahidol Adulyadej died of kidney failure in September 1929, when Bhumibol was less than two years old. He briefly attended Mater Dei school in Bangkok, but in 1933 his mother took her family to Switzerland, where he continued his education at the École nouvelle de la Suisse romande in Lausanne.

As King, Bhumibol maintained good relations with the United States, making the first of two return visits to the U.S. in 1960. President Eisenhower hosted a state dinner as well as received His Majesty in the Oval Office for a private consultation. The most remarkable of the fourteen speeches His Majesty gave during that trip was an address to the U.S. Congress on “mutual goodwill and close cooperation between our two countries”. King Bhumibol  and Queen Sirikit also made a stop at the famed Californian theme park Disneyland. Their Majesties, as well as Prince Vajiralongkorn and Princess Ubol Ratana Rajakanya were welcomed by Walt Disney himself.

On June 28, 1960, U.S. President Dwight D. Eisenhower personally welcomed King Bhumibol and Queen Sirikit on their first official visit to the United States capital, Washington, D.C. Both the President and the King gave short speeches highlighting the strong ties between the United States and Thailand. That evening, President Eisenhower and Vice President Nixon hosted a formal state dinner for Their Majesties at the White House.

On June 29, King Bhumibol Adulyadej addressed a Joint Session of the U.S. Congress saying, “I want to know how, in this country, millions of people, differing in race, tradition, and belief, can live together freely and in happy harmony.” On July 5, 1960, the king and queen were given a special “ticker-tape parade” in New York City. This is a large celebratory parade that is usually made even more lavish by scattering a snow-storm like flurry of shredded paper and confetti. Such a parade in the U.S. is reserved for very special occasions. Also during the 1960 visit, King Bhumibol paid a visit to Mount Auburn Hospital and met with the physician and nurses who had delivered his birth.

King Bhumibol and Queen Sirikit visited the United States for the second time in 1967. During this trip, the King dedicated a Thai pavilion to the East-West Center and received an honorary doctorate in law at Williams College. The most memorable statement of all the twelve speeches given by His Majesty during this visit was made at the White House: “We meet you both not only as Head of State, but as old friends. That is part of our people-to-people visit.”

In 1992, devoted Thai citizens in Cambridge erected a modest sign at the intersection of Eliot and Bennett Streets near the Kennedy School designating the square King Bhumibol Adulyadej Square. The Square was originally dedicated by his youngest daughter, Her Royal Highness Princess Chulaporn on April 8, 1990, and was unveiled by Her Royal Highness Princess Maha Chakri Sirindhorn on November 14, 1992.

“THIS SQUARE COMMEMORATES THE BIRTH OF HIS MAJESTY KING BHUMIBOL ADULYADEJ OF THAILAND AT MOUNT AUBURN HOSPITAL IN CAMBRIDGE , MASSACHUSETTS , ON DECEMBER 5, 1927, WHILE HIS FATHER, PRINCE MAHIDOL, WAS A STUDENT AT HARVARD MEDICAL SCHOOL .

THE SQUARE WAS DEDICATED ON APRIL 8, 1990 BY HER ROYAL HIGHNESS PRINCESS CHULABHORN, YOUNGEST DAUGHTER OF THEIR MAJESTIES THE KING AND QUEEN OF THAILAND, AND SHALL SERVE AS A REMINDER OF THE CLOSE TIES BETWEEN THE PEOPLE OF CAMBRIDGE AND THE PEOPLE OF THAILAND.

THIS PLAQUE WAS UNVEILED ON NOVEMBER 14, 1992 BY HER ROYAL HIGHNESS PRINCESS MAHA CHAKRI SIRINDHORN, REPRESENTING KING BHUMIBOL ADULYADEJ AND THE PEOPLE OF THAILAND.

A non-profit organization called the King of Thailand Birthplace Foundation (KTBF) established in 1998, comprised of Thai and American men and women who believe in cultural exchange, community service, and historic preservation. Their objective was to establish and maintain a cultural center recognizing the birthplace of King Bhumibol. Their main activity is to promote cultural exchanges. The foundation began renovating King Bhumibol Adulyadej Square soon after its foundation and is also in the process of establishing the KTBF Library and Museum in Gloucester in honor of the Mahidol family who lived in Massachusetts from 1916 until 1928. The owner of the house where Prince Mahidol stayed when he first arrived in Massachusetts has donated two rooms in their home to be used as a library and museum purpose. Another project is developing the Thai history path by placing a bronze plaque at each house where Prince Mahidol and the Princess Mother lived while in Massachusetts.

The foundation has located 11 locations around Massachusetts that have a special place in Thai history. One is in Brookline, next to Boston, where a plaque notes: “Prince Mahidol of Siam (Thailand) lived in one of the apartments here from 1926 to 1928 with his wife and their young children: Princess Galyani Vadhana, Prince Anandha [who was to become King Rama VIII], and Prince Bhumibol Adulyadej [who was to become King Rama IX]. Prince Bhumibol was born at Mount Auburn Hospital in Cambridge on 5 December 1927, the first monarch to be born in the continental United States.”

Following renovations to King Bhumibol Adulyadej Square, a new monument was installed there on November 18, 2003. It was made of North American pink granite, matching and aligning with the granite columns at the entrance to John F. Kennedy Park. The standard black sign used by the City of Cambridge was installed in place of the old bronze plaque King Bhumibol Square sign on November 21, 2003. The new King Bhumibol Square now is more attractive and visible to public.

The square has been an appealing site for visitors from Thailand as well as Thai citizens throughout the United States. The Thai community in Cambridge continues to grow rapidly with high-quality professional and medical people as well as students. With their strong interest in the arts, the influx of Thais has had a positive influence on the cultural life of Cambridge.

Following the announcement of His Majesty’s death on October 13, 2016, Thais and Americans gathered at King Bhumibol Adulyadej Square in Cambridge — many of them weeping — for a candlelight ceremony in his memory. On March 15, 2017, the United States passed Senate Resolution 9 in recognition of the immense contribution of His Majesty to the growth and strength of the alliance between Thailand and the United States. It also acknowledges his life-long dedication to the well-being of the Thai people of all backgrounds and the sustainable development of Thailand, which earned him the deep reverence of the Thai people and respect from abroad. The full text of the resolution can be found on the U.S. Congress website. 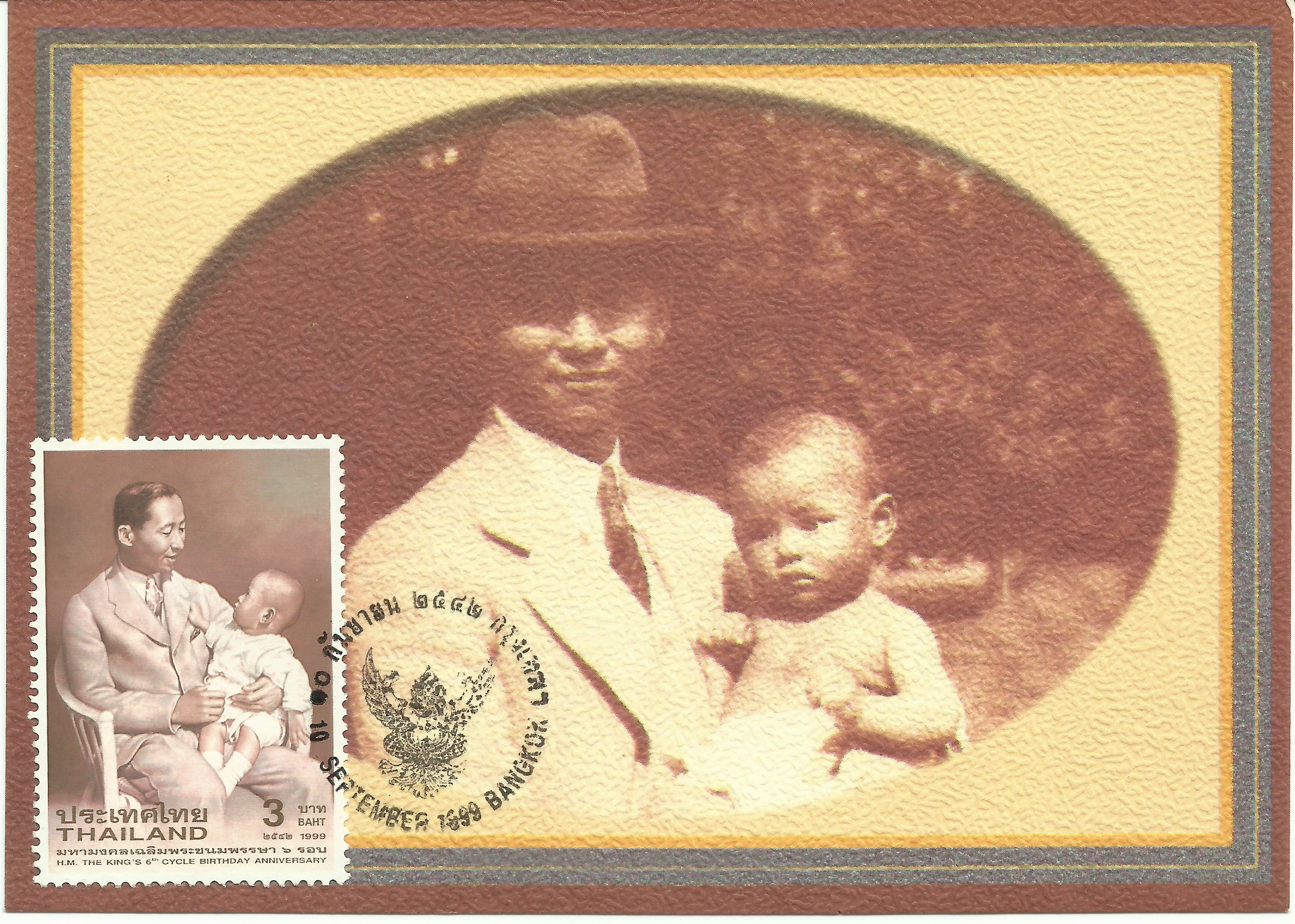 Certain birth anniversaries have significant meaning in Buddhist religion. Thus, the 72nd birthday of His Majesty the late King Bhumibol Adulyadej was marked in 1999 with a total of 25 stamps plus 4 souvenir sheets (another 25 stamps in those) in four different sets released between May and December that year. These commemorated what in Buddhism is known as the “6th Cycle Birth Anniversary”. The second set, released on September 10, 1999, consisted of nine stamps — three denominated 3 baht, three at 6 baht and another three valued 12 baht each (Scott 1892-1900) — as well as a souvenir sheet containing nine stamps. One million of each stamp were printed by Helio Courvosier S.A. of Switzerland using the photogravure process on granite paper, perforated  11½. The souvenir sheet was sold for 90 baht; there were 200,000 printed.