On December 5, 1997, on the occasion of the 70th birthday of His Majesty the late King Bhumibol Adulyadej, Rama IX, the Communications Authority of Thailand released a set of seven stamps highlighting some of the many private life activities and accomplishments of the king (Scott #1781-1787). These were printed using the photogravure process by Helio Courvoisier S.A. of Switzerland on granite paper, perforated 11½, in quantities of 6,000,000 each for the four 2-baht designs and 5,000,000 for those denominated 6, 7 and 9 baht. King Bhumibol was a painter, musician, photographer, sailor, author and translator, amongst other things.

Bhumibol was an accomplished jazz saxophone player and composer, playing dixieland and New Orleans jazz, and also the clarinet, trumpet, guitar, and piano. It is widely believed that his father, Mahidol Adulyadej, may have inspired his passion for artistic pursuits at an early age. As a youngster, Bhumibol initially focused on classical music exclusively for two years but eventually switched to jazz since it allowed him to improvise more freely. It was during this time that he decided to specialize in wind instruments, especially the saxophone and clarinet. His Majesty was influenced by jazz, for which he earned fame taking the nickname “King of Jazz”. Bhumibol’s musical influences included Louis Armstrong, Sidney Bechet, Benny Carter, and Johnny Hodges. 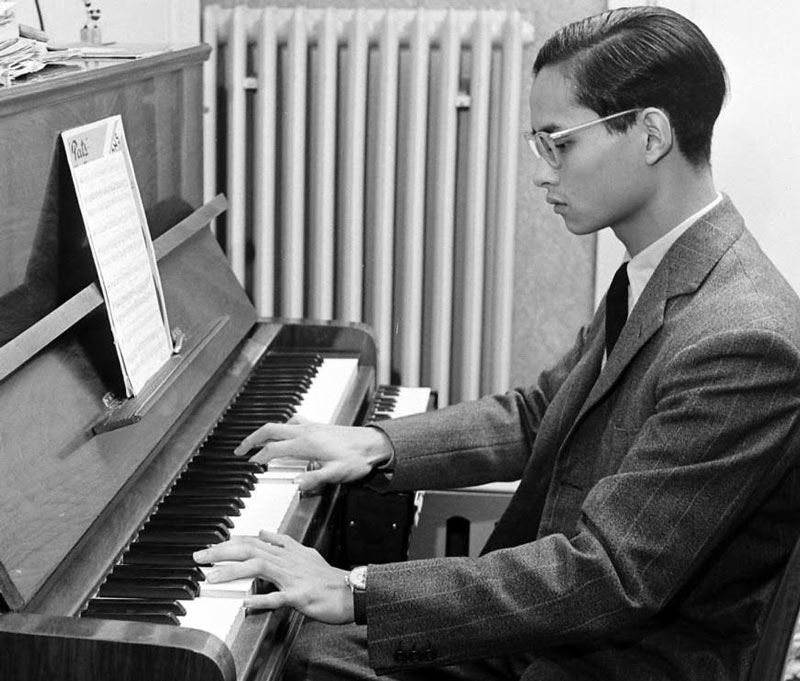 Bhumibol initially received general music training privately while he was studying in Switzerland, but his older brother, then King Ananda Mahidol, who had bought a saxophone, sent Bhumibol in his place. King Ananda would later join him on the clarinet. By the time Bhumibol turned 18, he started to compose his own music with the first being “Candlelight Blues.” He continued to compose even following his coronation. Later, Bhumibol performed with the Preservation Hall Jazz Band, Benny Goodman, Stan Getz, Lionel Hampton, and Benny Carter.

On his permanent return to Thailand in 1950, King Bhumibol started a jazz band, Lay Kram, whom he performed with on a radio station he started at his palace. The band grew, being renamed the Au Sau Wan Suk Band and he would perform with them live on Friday evenings, occasionally taking telephoned requests. Bhumibol also performed with his band at Thai universities, composing anthems for the universities of Chulalongkorn, Thammasat, and Kasetsart. The king first performed with Benny Goodman at the Amphorn Sathan Residential Hall, in 1956, and later played at Goodman’s home in New York in 1960. Many bands such as Les Brown and His Band of Renown, Claude Bolling Big Band, and the Preservation Hall Jazz Band recorded Bhumibol’s compositionswhich can still be heard in Thailand.

King Bhumibol composed a total of 48 songs. Much of it is jazz swing but he also wrote marches, waltzes, and Thai patriotic songs. His most popular compositions were “Candlelight Blues,” “Love at Sundown” and “Falling Rain” which were all composed in 1946. He also wrote the melody for “Phleng phra raj nipon” (เพลงพระราชนิพนธ์, literally “His Majesty the King Song”). The king wrote the lyrics for five songs, “Echo”, “Still On My Mind”, “Old-Fashioned Melody”, “No Moon,” and “Dream Island”. In addition, he penned several songs for which the melody was composed after the lyrics were written. including three patriotic songs, “The Highest Dream” or “The Impossible Dream” (ความฝันอันสูงสุด), “We Fight” (เราสู้) and “Love” (รัก). In later years, Bhumibol continued to play music with his Au Sau Wan Suk Band, but was rarely heard in public. A 1996 documentary, Gitarajan, was made about Bhumibol’s music.

In 1964, Bhumibol became the 23rd person to receive the Certificate of Bestowal of Honorary Membership on behalf of Vienna’s University of Music and Performing Arts. In 2000, he was awarded the Sanford Medal for his contribution in music from Yale School of Music. He was the first Asian in both cases to be honored as such. In 2003, the University of North Texas College of Music awarded him an honorary doctorate in music. Bhumibol’s influence is widely regarded as one reason why Thailand, and Bangkok in particular, has for decades had a strong jazz and improvised music “scene” relative to other Asian nations.