The Royal Regalia of Thailand (เครื่องราชกกุธภัณฑ์แห่งประเทศไทย — Khrueang Raja Kakudhabhand), together with the Royal Utensils (พระขัตติยราชูปโภค — Phra Khattiya Rajuprapoke}, and the Royal Eight Weapons of Sovereignty comprise a total of 28 items traditionally presented to the kings of Thailand at their coronation ceremonies. These serve to invest the king with the outward brilliance of majesty and command. They also serve to remind the people of the king’s burdens and his responsibilities to his subjects. Among the symbols of regal authority, the Quintet of Royal Regalia is considered to be of prime importance.

The use of the Royal Regalia in coronation ceremonies dates back to the Sukhothai Kingdom (13th-15th centuries), the state regarded as the first Thai kingdom. The present set of Royal Regalia and the Royal Utensils were created and assembled around 1785 for the second coronation ceremony of King Rama I, after the previous set was lost during the sack of Ayutthaya by the Burmese in 1767 The Quintet of Royal Regalia, which were made at that time, has been used at subsequent coronations, including that of His Majesty the late King Bhumibol Adulyadej, Rama IX, on May 5, 1950, at the Grand Palace in Bangkok.

The combination of these regal and practical objects can trace their symbolism to the ancient Indian subcontinent and are replicated by many monarchies within the Greater Indian cultural sphere. The regalia is presently on display in the Museum of the Grand Palace.

The Royal Utensils is a separate category of items, four items made of gold for the personal use of the monarch: the Betel Nut Set (พานพระขันหมาก — Paan Phra Khan Maak), the Water Urn (พระมณฑปรัตนครัณฑ์ — Phra Mondop Rattanakran), the Libation Vessel (พระสุพรรณราช — Phra Supan Na Raat), and the Receptacle (พระสุพรรณศรี — Phra Supan Na See). By possessing such mundane items, which were all made from precious materials, the king can show off his wealth and status to his subjects. The utensils are always placed at either sides of the king’s throne during royal ceremonies. These items are of a personal nature and are regarded as insignia of rank, not just for the king but for his officials as well. Once an individual is given high rank by the king, a replica set of these item would be given to him on the occasion of his promotion.

The eight weapons of sovereignty (พระแสงอัษฎาวุธ) are the Long Spear (พระแสงหอกเพชรรัตน์), the Long-Handled Sword (พระแสงดาบเชลย), the Trident (พระแสงตรี), the Chakra (พระแสงจักร), the Short Sword with Buckler (พระแสงเขนมีดาบ), the Bow (พระแสงธนู), the Elephant Goad Spear (พระแสงของ้าวพลพ่าย), and the Gun of Satong (พระแสงปืนคาบชุดแม่น้ำสโตง). Some of the oldest items of regalia in ancient India are weapons, the main four being the bow, the spear, the trident, and the chakra. The weapons are symbolic of the divine weapons of Shiva and Vishnu, mentioned in the Shatapatha Brahmana. The current set of weapons were all created during the reign of King Rama I, as reproductions of lost originals. Apart from the sacred weapons, the others are symbolic of the martial exploits of King Naresuan of Ayutthaya.

On July 2, 1988, the Communications Authority of Thailand released a set of 12 stamps (Scott #1253-1264) and a souvenir sheet of nine stamps (Scott #1264a) to mark the 42nd anniversary of King Bhumibol’s reign. Although he became the ninth king of the Chakri Dynasty on June 9, 1946, his coronation ceremonies didn’t occur until May 5, 1950.  Five of the stamps in this set portrayed the Royal Regalia. Each was denominated 2 baht and printed by photogravure, perforated 13½. Scott #1255 pictures the Sword of Victory.

The Sword of Victory or Phra Saeng Khan Chaiyasi (พระแสงขรรค์ชัยศรี) represents the military might and power of the king. The hilt has a length of 10 inches (25.4 centimeters) with the blade measuring 25 inches (64.5 cm). When placed in the scabbard, the sword has a total length of 40 inches (101 cm) and weighs 4.2 pounds (1.9 kilograms). The sword’s neck between the blade and the hilt is decorated with a gold inlaid miniature of Vishnu riding the Garuda.

The sword’s history has been shrouded in myth and legend. In 1784, Chao Phraya Apai Pubet of Cambodia received the blade from a fisherman who caught it in his net in Tonlé Sap — a seasonally inundated freshwater lake and an attached 75-mile (120 km) long river, that connects the lake to the Mekong in present-day Cambodia. The fisherman gave the sword to King Phutthayotfa Chulalok (Rama I) of Siam, his suzerain at the time. According to legend, it was said that the moment the blade arrived in Bangkok, seven lighting strikes hit the city simultaneously, including the city gate, where the blade entered, and over the main gate of the Grand Palace. 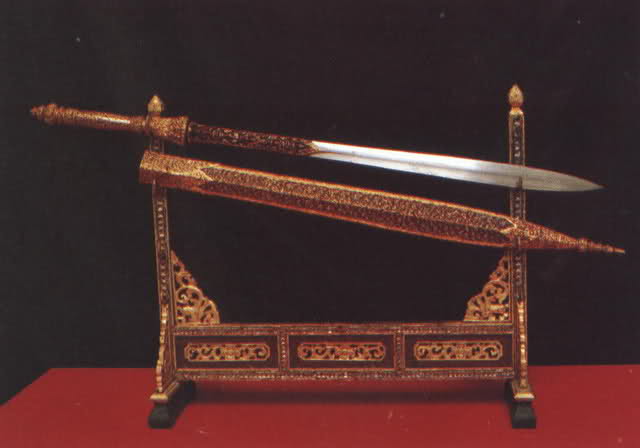 The sword’s Thai name means ‘the wisdom of the king’, as it was supposed to remind the king that he must rule over his people with wisdom. King Rama I had the hilt and scabbard made of gold, inlaid with diamonds and precious stones. During the coronation ceremony the king is handed the sword by a brahmin, then straps it onto his belt himself. The sword features heavily in the Oath of Allegiance Ceremony where the King ceremoniously dip the sword into a bowl of sacred water, and then drink the water as an example, followed by senior civil servants and military officers as a sign of allegiance to the institution of the monarchy.