For a number of years, it was customary for Thailand Post (and its predecessor, the Communications Authority of Thailand) to release at least a single stamp annually to mark the birth anniversary of His Majesty the late King Bhumibol Adulyadej, Rama IX. Occasionally, this practice expanded to multiple sets spread throughout the year. Indeed, in the dozen years that I have been a resident in the Kingdom, there were only two years that did not see a specific birthday-related release — 2010, which saw stamps marking the 60th anniversaries of His Majesty’s coronation and of King Bhumibol’s marriage to Queen Sirikit, and last year, 2016, in which the already-printed stamp was delayed by the king’s death on October 13. That stamp was ultimately released in April 2017.

The philatelic birthday celebrations were not always annual affairs, however. Today’s stamp, Scott #419 issued on December 5, 1963, to mark the king’s 36th birthday, was only the second such commemoration. The 1.50-baht blue, orange & indigo stamp was accompanied by a 5-baht bright lilac rose, orange & black emission bearing the same design (Scott #420). These were printed by The Government Printing Bureau of the Japanese Ministry of Finance in Tokyo using photogravure and perforated 13½. Two million of the 1.50 baht stamp was printed while the 5-baht value saw a printing of just 1,000,000. 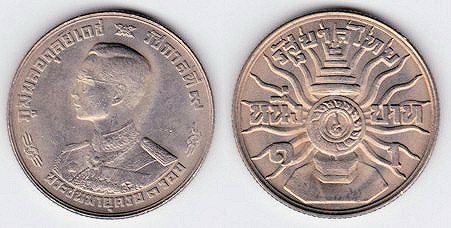 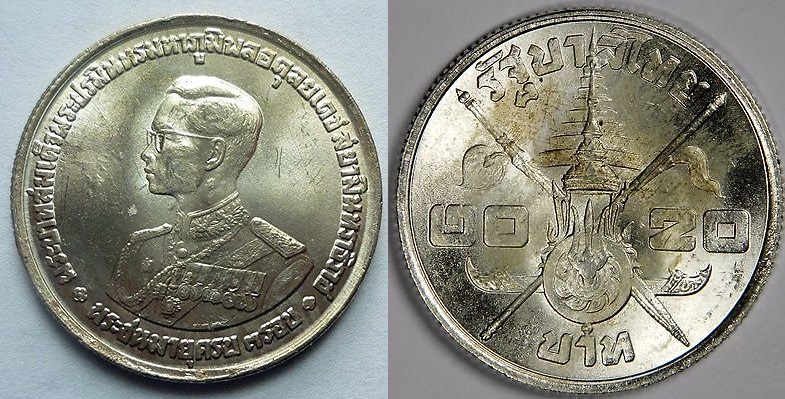 On the occasion of the king’s 36th birthday, Thailand also issued commemorative coins — a 1-baht coin in copper-nickel and a 20-baht coin measuing 34.5mm which was struck in .750 fine silver. It contains 0.4726 troy ounces of silver and remains the only Thai coin to contain any silver at all!

This is due to the Thai Buddhist calendar being based upon the Chinese zodiac that assigns an animal and its reputed attributes to each year in a repeating 12-year cycle. The animals of the Chinese zodiac are not associated with constellations spanned by the ecliptic plane. The 12-year cycle is an approximation to the 11.86-year orbital period of Jupiter, the largest planet of the solar system. It and its variations remain popular in several East Asian countries including China, Korea, Japan, and Mongolia, as well as in other Asian countries like Vietnam, Burma, Nepal, Bhutan, Sri Lanka, Cambodia, Laos and Thailand, along with the Buddhist calendar.

According to the Chinese zodiac, 2017 is the year of the Rooster. King Bhumibol was born on December 5, 1927, during the year of the Rabbit. Thus, his significant birth observations were during additional years of the Rabbit such as 1963 and 1975. This is why some of his birthday  stamps mention that it’s the “fourth cycle”, etc. birthday anniversary. In Thailand, many elderly people do not celebrate their birthdays except on these 12-year cycles; many younger people didn’t celebrate their birthdays at all until relatively recently and it’s becoming more Western-styled in nature (although the person celebrating his or her birthday is still the person expected to pay for their friends’ meals and drinks or to buy each attendee a gift!).