Royal residences of the Chakri Dynasty are scattered throughout Thailand and include the Grand Palace, nineteen royal palaces (พระราชวัง — phra ratcha wang — official residences of His Majesty the King and uparaja stipulated as such by royal decree) and other palaces (วัง — wang) used by the king or other members of the royal family. The Bureau of the Royal Household administers and manages several current royal palaces. Historical palaces from earlier periods exist mainly in the ruins of Ayutthaya and Sukhothai. I have visited two of the current palaces — the Royal Grand Palace in Bangkok and Bang Pa-In Royal Palace which sits perhaps 20 minutes south of Ayutthaya by train. Of the two, the latter remains my favorite.

The current royal palaces are:

Other current palaces maintained by the Bureau of the Royal Household are:

An extensive list of former royal residences used during the Rattanakosin period (Chakri dynasty) as well as a few of the historical palaces can be found on Wikipedia. 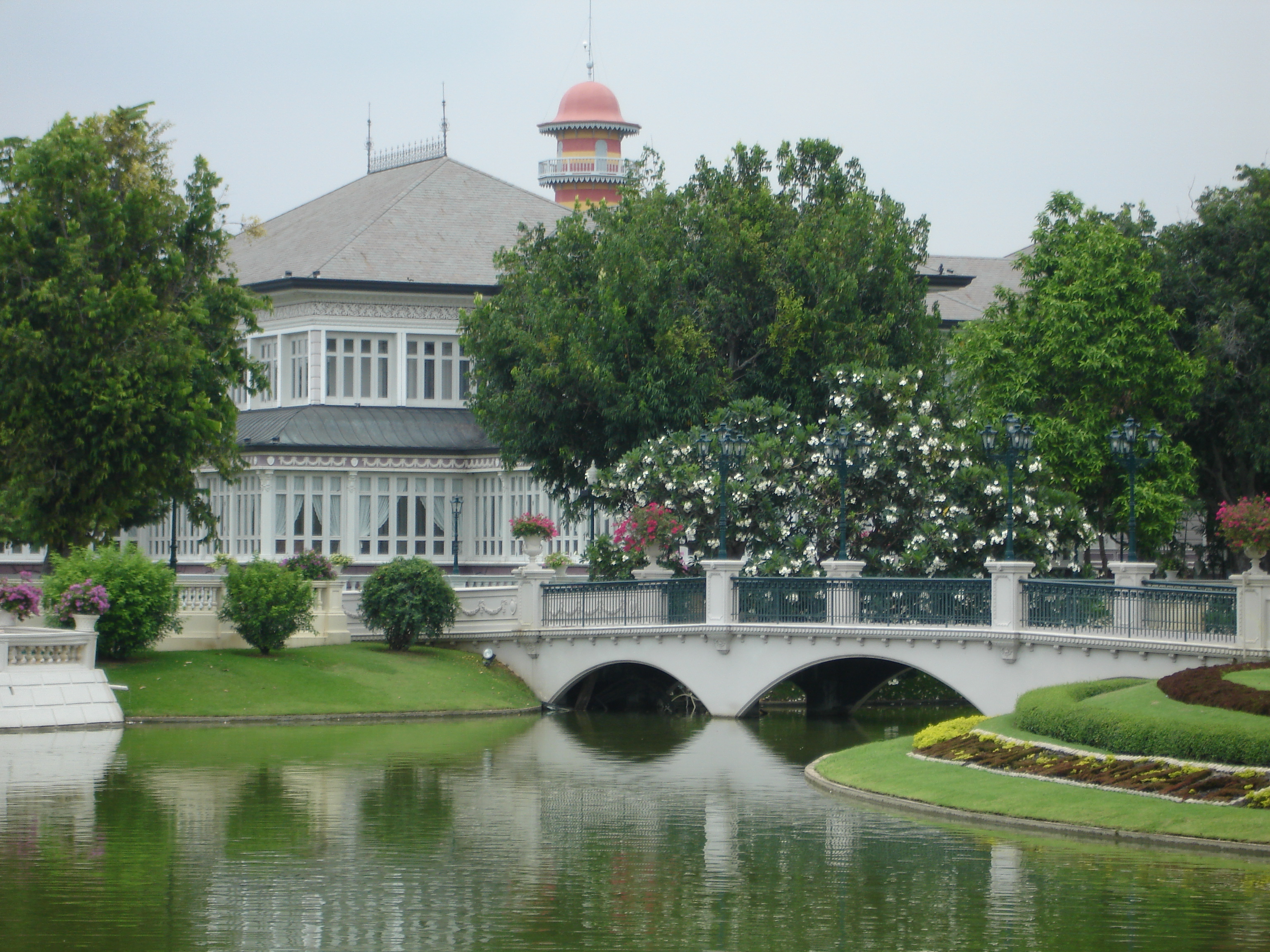 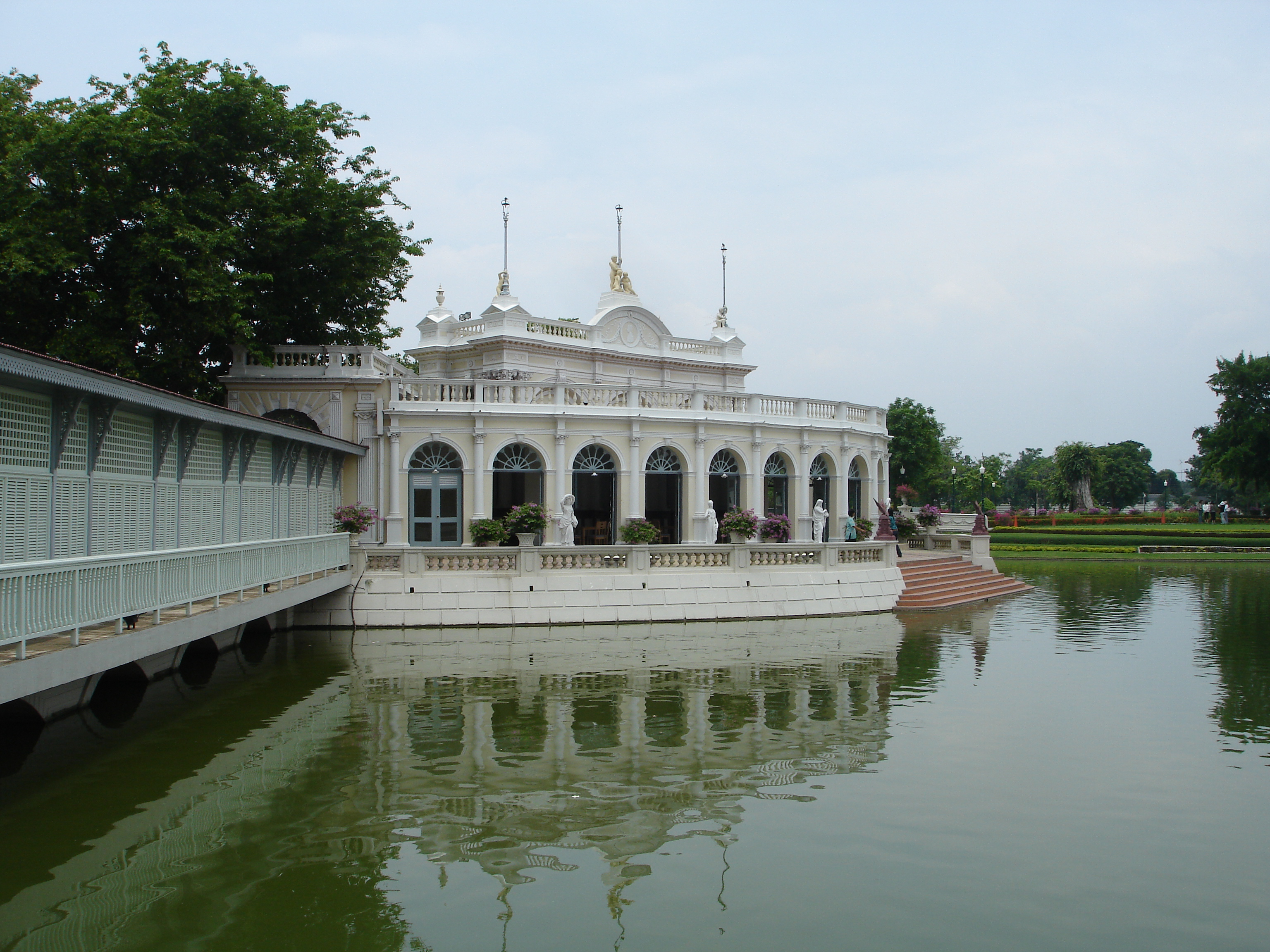 According to a chronicle of Ayutthaya, King Prasat Thong originally constructed the palace in 1632 siting it on Bang Pa-In Island in the Chao Phraya River. A contemporary Dutch merchant, Jeremias van Vliet, reported that King Prasat Thong was an illegitimate son of King Ekathotsarot, who in his youth was shipwrecked on the island and had a son by a woman who befriended him. The boy grew up to become the Chief Minister. After having usurped the throne, he became known as King Prasat Thong.

The king founded a monastery, Wat Chumphon Nikayaram, on the land belonging to his mother on Bang Pa-In Island, and then had a pond dug and a palace built to the south of the monastery. The chronicle records the name of only one building, the Aisawan Thiphaya-art Royal Residence, which was constructed in 1632, the year of the birth of his son, the future King Narai (reigned 1656-1688).

It is not known if the palace was in use at the time of the fall of Ayutthaya in 1767. By 1807 when the Kingdom’s best known poet — Sunthon Phu — sailed past Bang Pa-In, only a memory of the palace remained, for the site was neglected and overgrown. King Mongkut (Rama IV) began to restore the site in the mid-19th century. He had a temporary residence constructed on the outer island which later became the site of a Neo-Gothic monastery — Wat Niwet Thamprawat — built by his son and heir, King Chulalongkorn (Rama V, reigned 1868-1910). Most of the buildings standing today were constructed between 1872 and 1889.

During the reign of King Bhumibol, he and his family occasionally used Bang Pa-In Royal Palace for banquets and other special occasions. 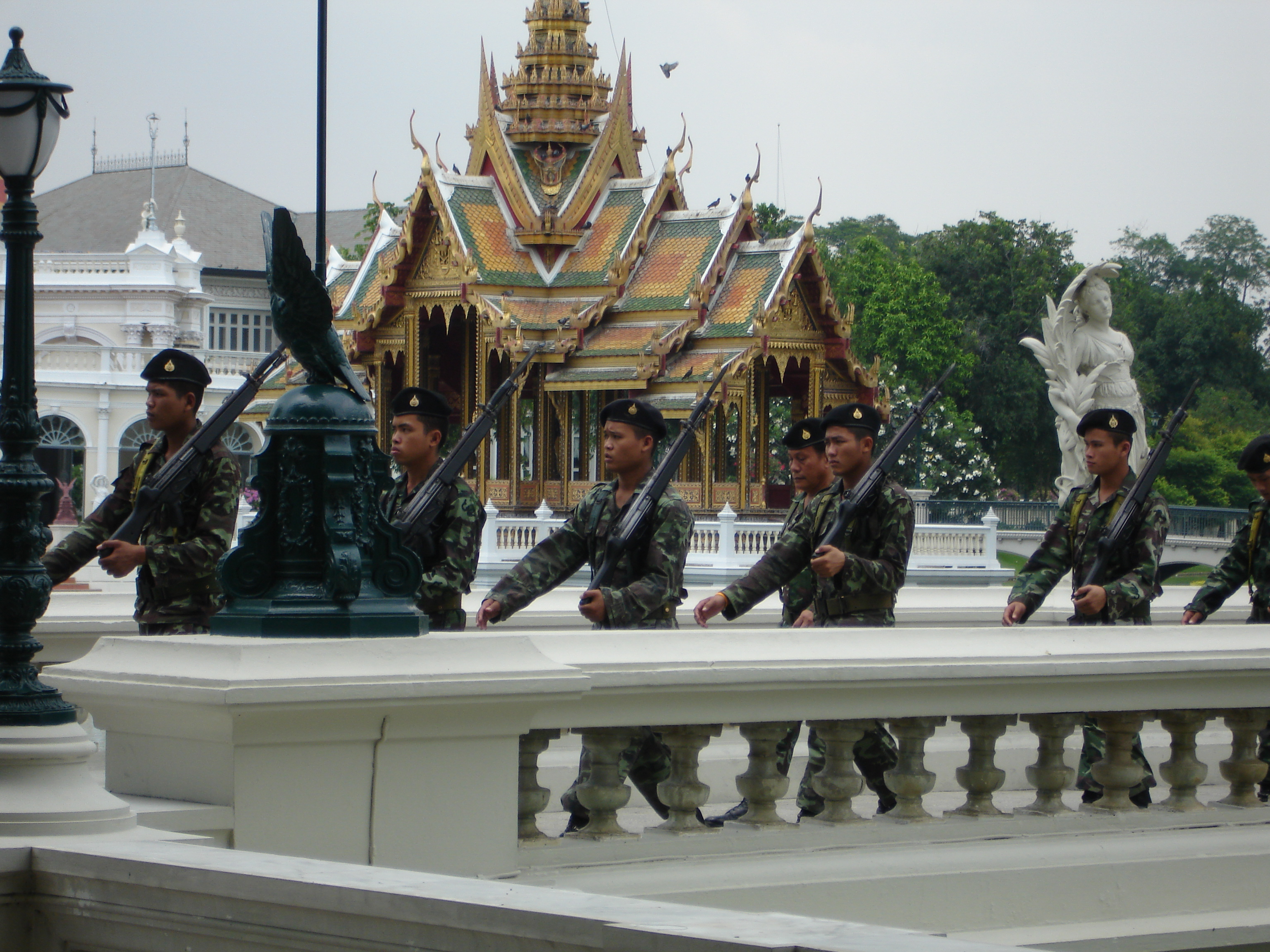 I first visited Bang Pa-In in May 2006 amidst the Kingdom’s celebrations of the 60th anniversary of Bhumibol’s accession to the throne. My ex-wife’s daughter lived near the palace with her husband. It may have been my first encounter with Thailand’s dual-pricing system as I vividly remember paying a 100-baht “foreigner” admission price while the members of my family were each charged 30 baht. I have come to accept this custom, but I wasn’t so enlightened back then! I was struck by the beauty and almost-European landscaping of the grounds, the nearly complete lack of any other tourists besides ourselves, and the large number of camouflaged soldiers armed with rifles or machine guns at every turn of the footpaths. 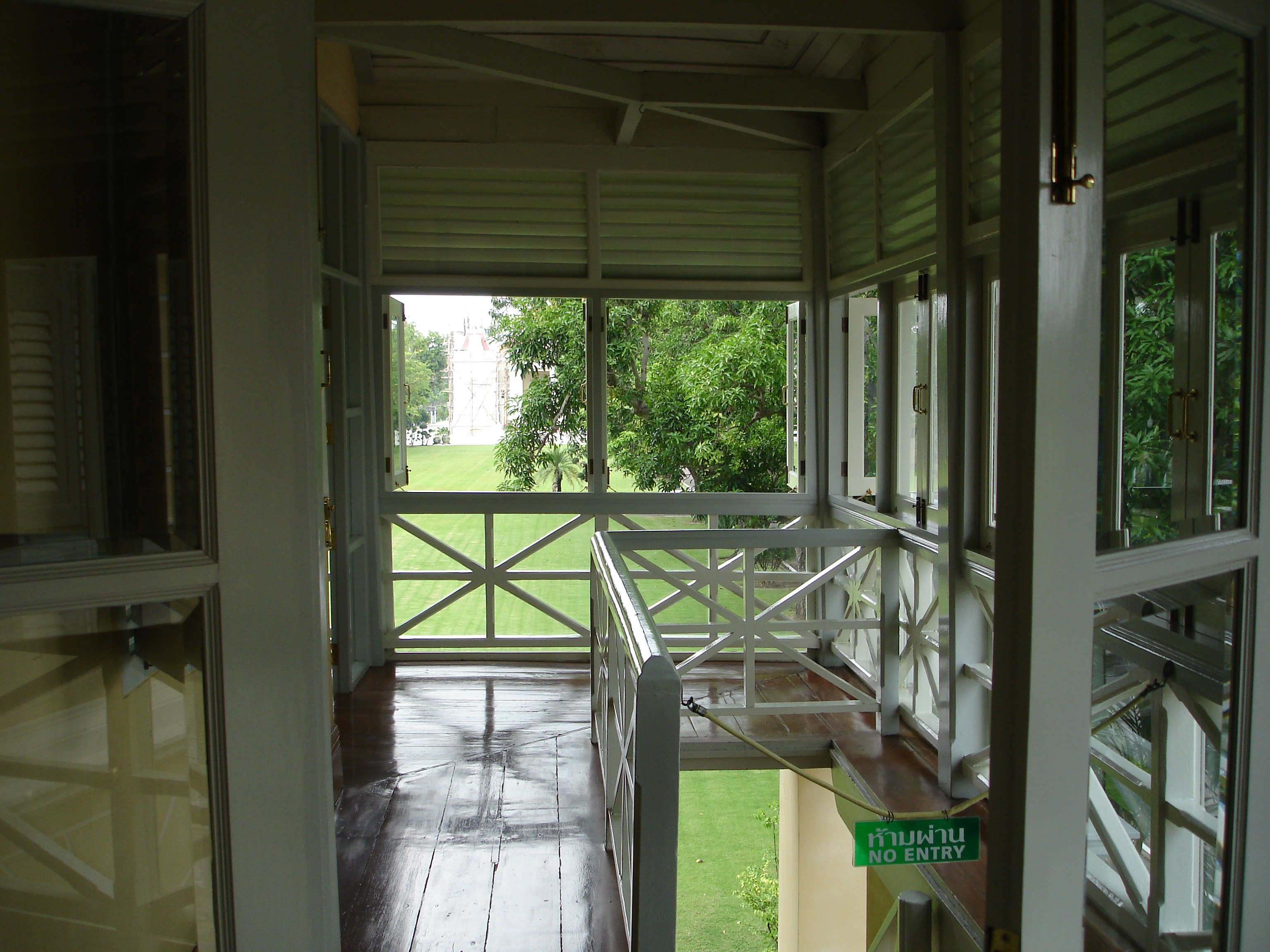 On another visit in November 2006, we were awoken at my former step-son-in-law’s home late in the night by the state and royal police who wanted people to line the road to wave Thai tri-colors and yellow flags bearing His Majesty’s cipher as the Royal motorcade drove past. After what seemed like hours of waiting (mind you, this was around 3 am on a rather remote stretch of country road), headlights materialized out of the mist and several cream-colored convertible limousines sped past at a very high rate of speed while we cheered “Chaiyo!” (Cheers!) and “Long Live the King!”. I still have no idea who exactly was in the motorcade but I suspect it was the then-Crown Prince Vajiralongkorn who accepted the crown on December 4, 2016, nearly two months after King Bhumibol died.

Similar to most Thai royal palaces, the Bang Pa-In compound is divided into two sections, the Outer and Inner Palace. The Outer Palace consists of buildings for public and ceremonial uses while the Inner Palace is reserved for the King and his immediate family. Formerly the Inner Palace was forbidden to male members of the court.

The principal buildings in the Outer Palace section are the following:

The Inner Palace is separated from the Outer Palace by a covered bridge with a louvered wall from which the court ladies could look out without being seen themselves. This bridge connects the Warophat Phiman Mansion to the Thewarat Khanlai (“The God King Goes Forth”) Gate; which is the principal entrance to the Inner Palace.

Ho Hem Monthian Thewarat (Golden Palace of The God King) is a small stone structure in the form of a Khmer-style prasat (residence of a king or god with a corncob-shaped super-structure) built by King Chulalongkorn in 1880 and dedicated to King Prasat Thong of Ayutthaya, the literal translation of whose name is King of the Golden Palace, because a miniature Khmer-style prasat of gold was discovered during his reign.

Saphakan Ratchaprayun (Assembly Hall for Royal Relatives) is a colonial-style two-story structure built in 1879 for King Chulalongkorn’s brothers and their suites. 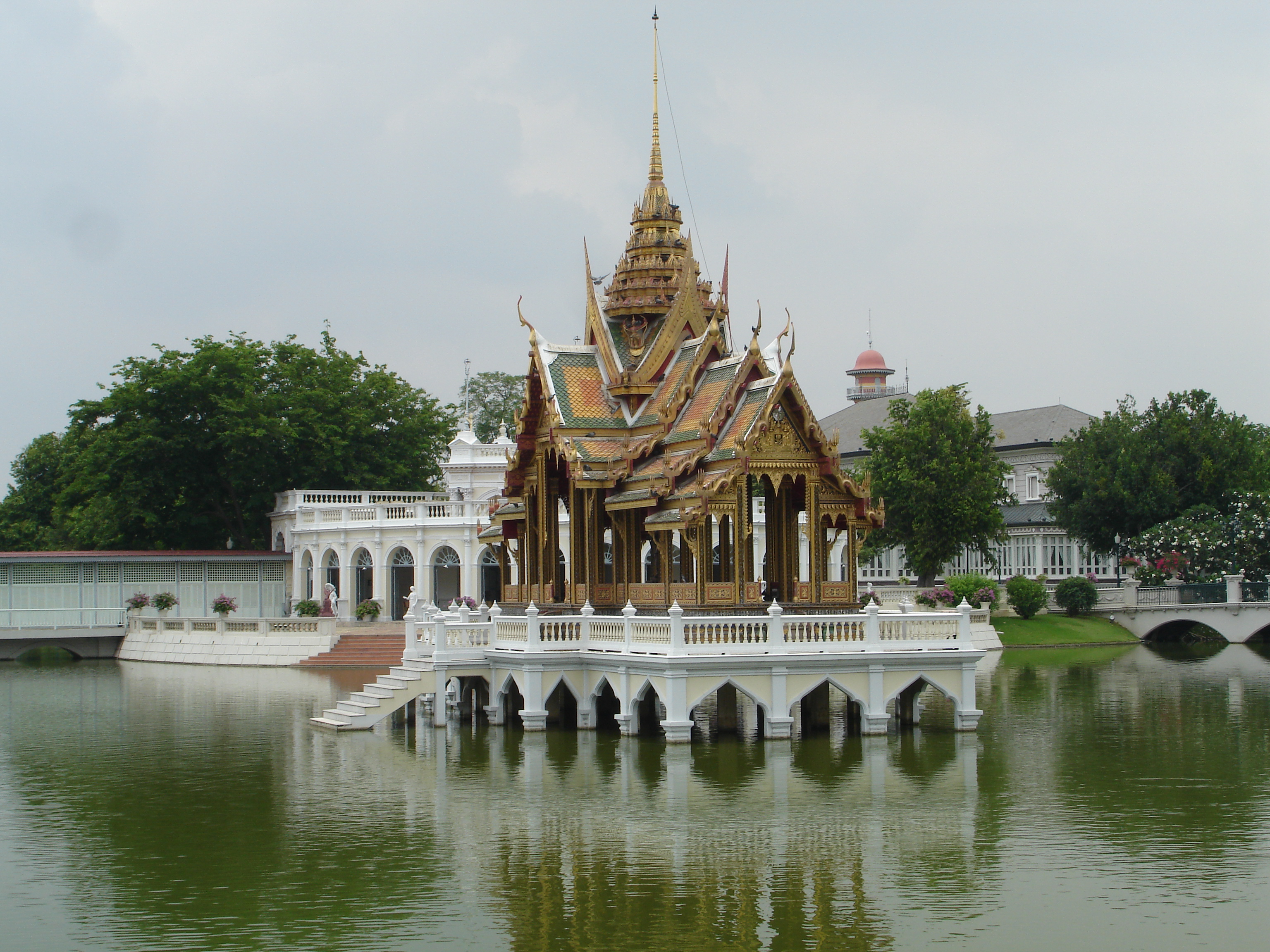 The Phra Thinang (Royal Residence) Aisawan Thiphya-Art (The Divine Seat of Personal Freedom) is portrayed on today’s stamp, listed in the Scott catalogue for Thailand as #1114, released on August 4, 1985. Note the above name is from the Bureau of the Royal Household website; Wikipedia has three names for the pavilion in the same article (Aisawan Dhiphya-Asana Pavilion, Aisawanthipphaya-At Pavilion, and Aisawan Thiphya-Art), while the stamp itself (and the Scott catalogue) calls it Aisvarya Pavilion all of which illustrates just how everybody has their own way of transliterating Thai pronunciation into English spellings.

Phra Thinang Aisawan Thiphya-Art is a Thai-style pavilion with four porches and a spired roof built by King Chulalongkorn in the middle of an outer pond in 1876. It is a copy of the Phra Thinang Aphonphimok Prasat in the Grand Palace, which was built by his father, King Mongkut, as a pavilion for changing regalia before mounting a palanquin. King Chulalongkorn named this building Aisawan Thiphya-Art after King Prasat Tong’s original pavilion. The pavilion now houses a bronze statue of King Chulalongkorn in the uniform of a Field Marshal which was placed there by his son King Vajiravudh (Rama VI).

Phra Thinang (Royal Residence) Warophat Phiman (Excellent and Shining Heavenly Abode) is a Neo-Classic style one-story mansion built by King Chulalongkorn in 1876 as his residence and throne hall. The audience chambers and anterooms are decorated with oil paintings depicting significant events in Thai history and scenes from Thai literature. The series of historical paintings was commissioned by Chulalongkorn in 1888. The private apartments of this building in the Inner Palace section are still used by Their Majesties whenever they reside at Bang Pa-In Palace. 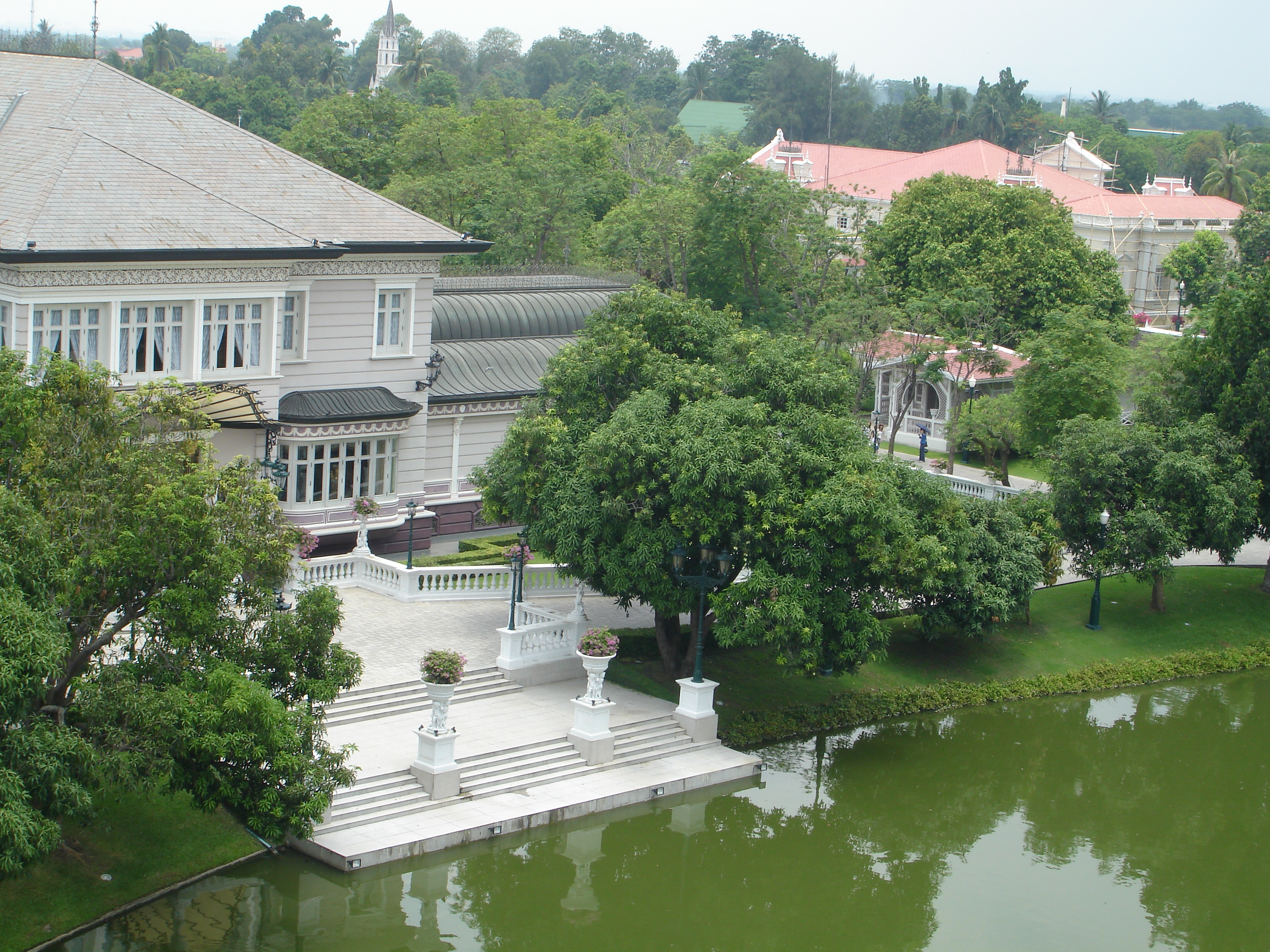 Phra Thinang (Royal Residence) Uthayan Phumisathian (Garden of The Secured Land) was the favorite residence of King Chulalongkorn when he stayed at Bang Pa-In Palace, sometimes as often as three times a year. Built in 1877 of wood in the style of a two-story Swiss chalet, the mansion was painted in two tones of green. In the words of Prince Ookhtomsky, a Russian officer who accompanied the Czarevitch, the future Czar Nicholas II of Russia, on a visit in 1890, it was “furnished luxuriously and with refined taste and comfort”. Unfortunately, while undergoing minor repairs it was accidentally burnt down in 1938. The new building which replaced it was constructed in 1996 at the expressed wishes of Her Majesty Queen Sirikit. The water tank, disguised as a crenellated Neo-Gothic tower, is only part of the original structure still in existence. 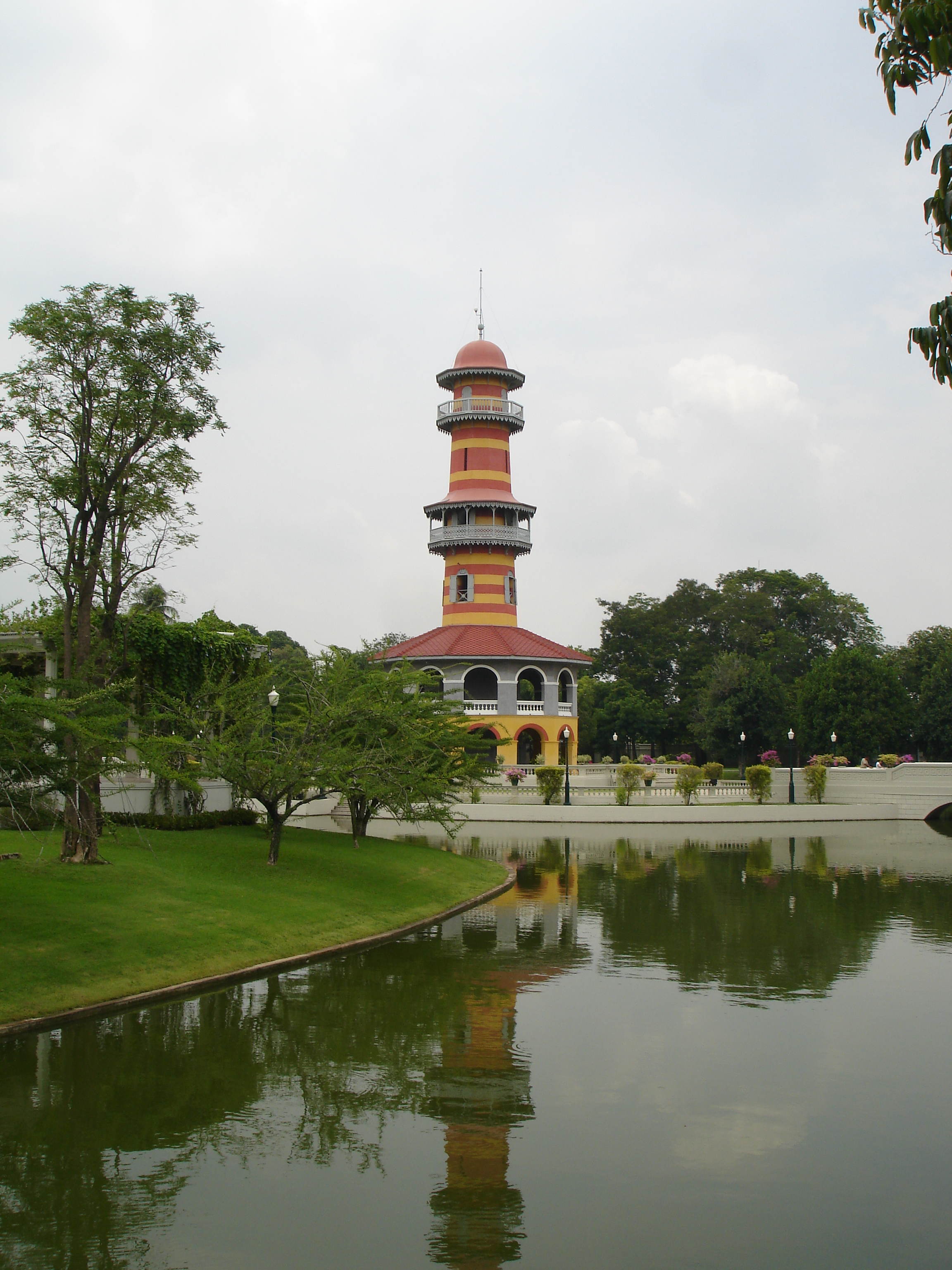 Ho Withun Thasana (The Sages’ Lookout) is an observatory built by King Chulalongkorn in 1881 as a lookout tower for viewing the surrounding countryside. 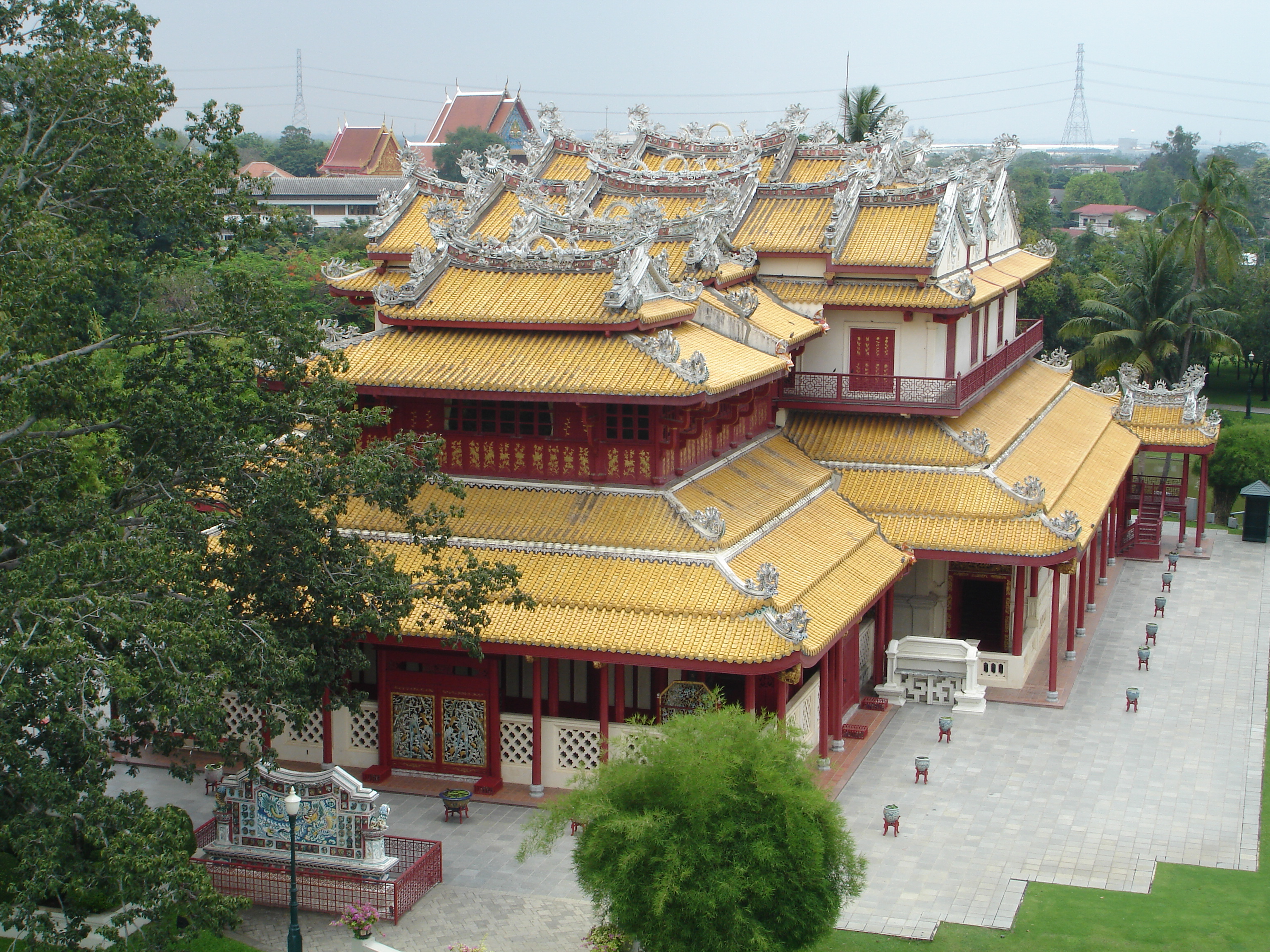 Phra Thinang (Royal Residence) Wehart Chamrun (Heavenly Light) is a Chinese-style two-story mansion that was built by the equivalent of the Chinese Chamber of Commerce and presented to King Chulalongkorn in 1889. Prince Ookhtomsky recorded that, “It is really a palace of romance, with ornamented tiled floors, massive ebony furniture, gold, silver, and porcelain freely used for decorative purposes, and delicate fretwork on the columns and on the windows. Evidently we have before us the principal sight of Bang Pa-In. The Emperor of China himself can scarely have a palace much finer than this”

The ground floor contains a Chinese-style throne; the upper floor houses an altar enshrining the name plates of King Mongkut and King Chulalongkorn with their respective queens. This Chinese-style mansion was the favorite residence of King Vajiravudh (reigned 1910-1925) when he visited Bang Pa-In Palace.

Within the precincts of the Inner Palace were many Western-style buildings of one or two floors for the ladies of the court. Called the Phra Tamnak Fai Nai (Royal Residences of The Inside). only a few remain today.

In 1887, one of King Chulalongkorn’s consorts — Princess Saovabhark Nariratana — and three of his children died. The king had a marble cenotaph bearing their portraits built for them near an earlier monument to Queen Sunandakumariratana in the Inner Palace section.

From August 4-13, 1985, the THAIPEX 85 stamp exhibition was held in Bangkok. To mark the occasion, a set of four stamps were issued on the first day of the show bearing some of the important buildings at Bang Pa-In Royal Palace (Scott #1114-1117). These were printed by Société Nouvelle Cartor Sarl, France, in quantities of 3,000,000 for the 2-baht value and 1,000,000 each for the stamps denominated 3 baht, 7 baht and 10 baht, perforated 13½. In addition, souvenir sheets including each of the four stamps were issued in both perforated and imperforate varieties, the latter being extremely rare (Scott #1117a).