Warren Gamaliel Harding, the 29th President of the United States, was born on November 2, 1865. At the time of his death in 1923, he was one of the most popular presidents, but the subsequent exposure of scandals that took place under his administration, such as Teapot Dome, eroded his popular regard, as did revelations of an affair by Nan Britton, one of his mistresses. In historical rankings of the U.S. presidents, Harding is often rated among the worst.

Harding was born in Blooming Grove, Ohio, and lived in rural Ohio all his life, except when political service took him elsewhere. Nicknamed “Winnie” as a small child, Harding was the eldest of eight children. It was rumored by a political opponent in Blooming Grove that one of Harding’s great-grandmothers was African American. His great-great grandfather Amos Harding claimed that a thief, who had been caught in the act by the family, started the rumor in an attempt at extortion or revenge.

In Harding’s youth, the majority of the population still lived on farms and in small towns. He settled in Marion, a small city in rural Ohio, when not yet 20 years old and would spend much of his life there, becoming closely associated with it. When Harding rose to high office, he made clear his love of Marion and its way of life, telling of the many young Marionites who had left and enjoyed success elsewhere, while suggesting that the man, once the “pride of the school”, who had remained behind and become a janitor, was “the happiest one of the lot”

Upon graduating from Ohio Central College in Iberia, Harding had stints as a teacher and as an insurance man, and made a brief attempt at studying law. He then raised $300 in partnership with others to purchase a failing newspaper, The Marion Star, weakest of the growing city’s three papers, and its only daily. The 18-year-old Harding used the railroad pass that came with the paper to attend the 1884 Republican National Convention, where he hobnobbed with better-known journalists and supported the presidential nominee, former Secretary of State James G. Blaine. Harding returned from Chicago to find that the paper had been reclaimed by the sheriff. During the election campaign, Harding worked for the Marion Democratic Mirror and was annoyed at having to praise the Democratic presidential nominee, New York Governor Grover Cleveland, who won the election. Afterward, with the financial aid of his father, the budding newspaperman redeemed the paper and turned it into a successful periodical during the 1880s. 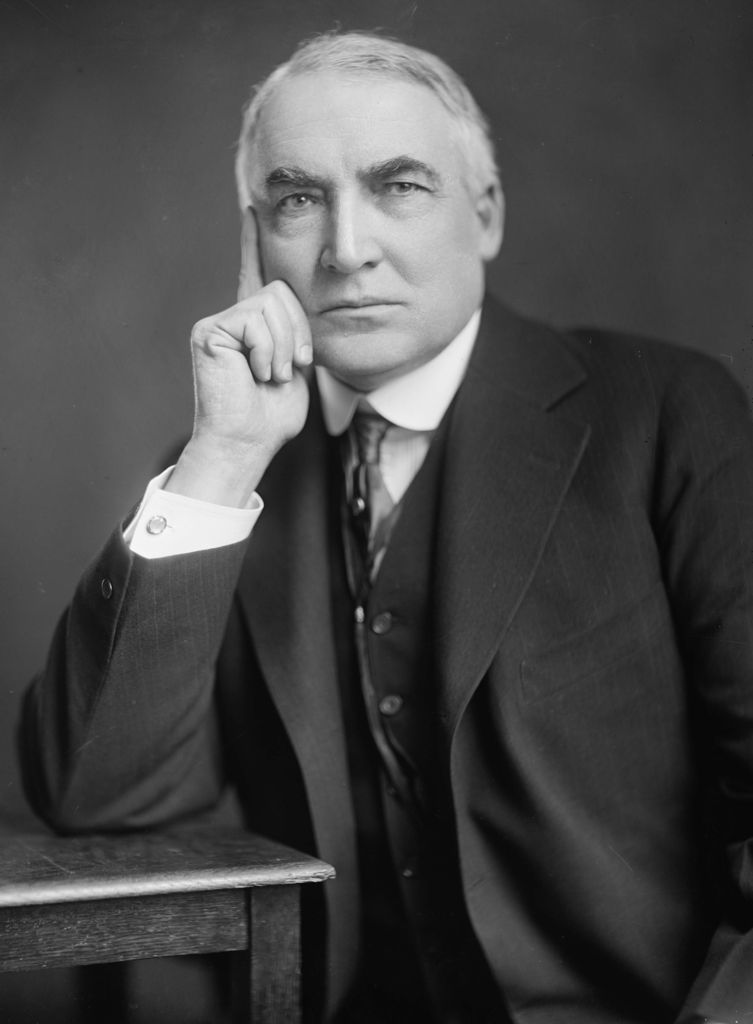 In 1892, Harding traveled to Washington, where he met Democratic Nebraska Congressman William Jennings Bryan, and listened to the “Boy Orator of the Platte” speak on the floor of the House of Representatives. Harding traveled to Chicago’s Columbian Exposition in 1893. Democrats generally won Marion County’s offices; when Harding ran for auditor in 1895, he lost, but did better than expected. The following year, Harding was one of many orators who spoke across Ohio as part of the campaign of the Republican presidential candidate, that state’s former governor, William McKinley. According to Dean, “while working for McKinley [Harding] began making a name for himself through Ohio”

When Harding ran for the Republican nomination for president in 1920 he was considered a long shot until after the convention began. Then the leading candidates, such as General Leonard Wood, could not gain the needed majority, and the convention deadlocked. Harding’s support gradually grew until he was nominated on the 10th ballot. He conducted a front porch campaign, remaining for the most part in Marion and allowing the people to come to him. He won in a landslide over Democrat James M. Cox and Socialist Party candidate Eugene Debs, running on a theme of return to normalcy and becoming the first sitting senator to be elected president.

Warren Harding was sworn in as president on March 4, 1921, in the presence of his wife and father. Harding preferred a low-key inauguration, without the customary parade, leaving only the swearing-in ceremony and a brief reception at the White House. In his inaugural address he declared, “Our most dangerous tendency is to expect too much from the government and at the same time do too little for it.”

After the election, Harding had announced he was going on vacation, and that no decisions about appointments would be made until he returned to Marion in December. He went to Texas, where he fished and played golf with his friend Frank Scobey (soon to be Director of the Mint), then took ship for the Panama Canal Zone. He went to Washington, where he was given a hero’s welcome when Congress opened in early December as the first sitting senator to be elected to the White House. Back in Ohio, he planned to consult the “best minds” of the country on appointments, and they dutifully journeyed to Marion to offer their counsel.

Harding appointed a number of well-regarded figures to his cabinet, including Andrew Mellon at the Treasury, Herbert Hoover at Commerce and Charles Evans Hughes at the State Department. A major foreign policy achievement came with the Washington Naval Conference of 1921–1922, in which the world’s major naval powers agreed on a naval limitations program that lasted a decade.

Two members of his cabinet were implicated in corruption: Interior Secretary Albert Fall and Attorney General Harry Daugherty. The resulting scandals did not fully emerge until after Harding’s death, nor did word of his extramarital affairs, but both greatly damaged his reputation.

While on a speaking tour, Harding went to bed early in the evening of July 27, 1923. Later that night, he called for his physician, Charles E. Sawyer, complaining of pain in the upper abdomen. Sawyer thought it was a recurrence of a dietary upset, but Dr. Joel T. Boone suspected a heart problem. The next day, as the train rushed to San Francisco, Harding felt better, and when they arrived on the morning of July 29, 1923, he insisted on walking from the train to the car, which rushed him to the Palace Hotel where he suffered a relapse.

Doctors found that not only was Harding’s heart causing problems, but he also had pneumonia, a serious matter in the days before effective antibiotics. When treated with caffeine and digitalis, Harding seemed to improve. He was pleased when his planned foreign policy address advocating membership in the World Court was released to the press by Hoover and received a favorable reception.

By the afternoon of August 2, 1923, doctors allowed Harding to sit up in bed. That evening, about 7:30 pm, he was listening to his wife read him a flattering article about him from The Saturday Evening Post, “A Calm Review of a Calm Man”. When she paused to plump his pillows, he said, “That’s good, read some more”. As Florence Harding resumed, her husband twisted convulsively and collapsed, and she raced to get the doctors. They attempted stimulants, but were unable to revive him, and President Harding died of a heart attack at the age of 57. His death was initially attributed to a cerebral hemorrhage, as doctors at the time did not generally understand the symptoms of a heart attack.

Harding’s death came as a great shock to the nation. The president was liked and admired, and the press and public had followed his illness closely, and been reassured by his apparent recovery. Harding was returned to his train in a casket for a journey across the nation followed closely in the newspapers. Nine million people lined the tracks as Harding’s body was taken from San Francisco to Washington, D.C., and after services there, home to Marion, Ohio, for burial. He was succeeded by his vice president, Calvin Coolidge.

In Marion, the body of Warren Harding was placed on a horse-drawn hearse, which was followed by President Coolidge and Chief Justice Taft, then by Harding’s wife and father. They followed it through the city, past the Star building where the presses stood silent, and at last to the Marion Cemetery, where the casket was placed in the cemetery’s receiving vault. Harding’s body, along with that of his wife who died in 1924, rests today in the Harding Tomb, which was dedicated in 1931 by President Hoover.

I only have four stamps (two being the same) picturing Warren G. Harding; all are in rather poor condition so I chose the “best” of the batch, Scott #553. This was the second stamp to bear the president’s likeness, the first having been issued less than a month after Harding’s death on August 2, 1923. The Post Office Department issued a special 2-cent memorial stamp in black rather than the red color required for international use by the Universal Postal Union (Scott #610). It featured a profile portrait of Harding engraved from an etching taken from a photograph. The stamp was the same size, with a slightly altered frame, as the 2-cent stamp design of the definitive series of 1922-1923.

The initial Harding stamps were produced on the flat-plate press. They were first issued on September 1, in Marion, Ohio, and in the District of Columbia. It was planned that the highly-publicized memorial stamp would only be sold for a period of ninety days. On September 6, stamps produced on the Stickney rotary press went on sale. The stamps were also offered for sale as flat-plate imperforate sheets on November 15. According to the Post Office Department press release, they were issued to meet the demand from collectors.

In 1925, Harding was chosen to appear on a 1½-cent postage stamp made necessary by postage rate changes in 1925 (Scott #553). The first fractional cent stamp in U.S. history, it was intended for use on third-class mail. Clair Aubrey Huston designed the stamp. Frederic Pauling engraved the vignette, a Harding profile. It was the same vignette used in 1923 on the 2-cent stamp issued in memory of Harding — stamps sometimes called the ‘Black Hardings’. Engravers E.M. Hall, J.C. Benzing, and E. M. Weeks worked on the frame.

Both the flat plate press and the rotary press were used to print sheets of the stamp, which were issued on March 19, 1925. A sidewise coil version was also issued that day. Subsequently, an endwise coil version was released. In 1930, the Post Office Department decided that the 1.½-cent Harding should feature a full-face version of Harding’s likeness, and it issued a new version of the stamp on December 4. (Scott #684).