The Republic of Zimbabwe is a landlocked country located in southern Africa, between the Zambezi and Limpopo Rivers, bordered by South Africa, Botswana, Zambia, and Mozambique. The capital and largest city is Harare. A country of roughly 16 million people, Zimbabwe has 16 official languages, with English, Shona, and Ndebele the most commonly used. The region was initially the British colony of Southern Rhodesia and, following its Unilateral Declaration of Independence in 1965, the nation existed as the self-declared, unrecognized state of Rhodesia until 1979, when it reconstituted itself under indigenous African  rule as Zimbabwe Rhodesia, which also failed to win overseas recognition. After a period of interim British control following the Lancaster House Agreement in December 1979, the country achieved internationally recognized independence as Zimbabwe in April 1980. Please see this blog’s previous articles about Southern Rhodesia and Rhodesia for more on the early history of the region.

Since the 11th century, present-day Zimbabwe has been the site of several organized states and kingdoms as well as a major route for migration and trade. The British South Africa Company of Cecil Rhodes first demarcated the present territory during the 1890s; it became the self-governing British colony of Southern Rhodesia in 1923. In 1965, the conservative white minority government unilaterally declared independence as Rhodesia. The state endured international isolation and a 15-year guerrilla war with black nationalist forces; this culminated in a peace agreement that established universal enfranchisement and de jure sovereignty as Zimbabwe in April 1980. Zimbabwe then joined the Commonwealth of Nations, which it withdrew from in December 2003. It is a member of the United Nations, the Southern African Development Community (SADC), the African Union (AU), and the Common Market for Eastern and Southern Africa (COMESA). It was once known as the “Jewel of Africa” for its prosperity.

Robert Mugabe became Prime Minister of Zimbabwe in 1980, when his ZANU-PF party won the elections following the end of white minority rule; he was the President of Zimbabwe from 1987 until his resignation in 2017. Under Mugabe’s authoritarian regime, the state security apparatus dominated the country and was responsible for widespread human rights violations. Mugabe maintained the revolutionary socialist rhetoric of the Cold War era, blaming Zimbabwe’s economic woes on conspiring Western capitalist countries. Contemporary African political leaders were reluctant to criticize Mugabe, who was burnished by his anti-imperialist credentials, though Archbishop Desmond Tutu called him “a cartoon figure of an archetypal African dictator”. The country has been in economic decline since the 1990s, experiencing several crashes and hyperinflation along the way.

On November 15, 2017, in the wake of over a year of protests against his government as well as Zimbabwe’s rapidly declining economy, Mugabe was placed under house arrest by the country’s national army in a coup d’état. On November 19, ZANU-PF sacked Robert Mugabe as party leader and appointed former Vice President Emmerson Mnangagwa in his place. On November 21, Mugabe tendered his resignation prior to impeachment proceedings being completed.

The name “Zimbabwe” stems from a Shona term for Great Zimbabwe, an ancient ruined city in the country’s south-east whose remains are now a protected site. Two different theories address the origin of the word. Many sources hold that “Zimbabwe” derives from dzimba-dza-mabwe, translated from the Karanga dialect of Shona as “large houses of stone” (dzimba = plural of imba, “house”; mabwe = plural of bwe, “stone”). The Karanga-speaking Shona people live around Great Zimbabwe in the modern-day province of Masvingo. Archaeologist Peter Garlake claims that “Zimbabwe” represents a contracted form of dzimba-hwe, which means “venerated houses” in the Zezuru dialect of Shona and usually references chiefs’ houses or graves.

Zimbabwe was formerly known as Southern Rhodesia (1898), Rhodesia (1965), and Zimbabwe Rhodesia (1979). The first recorded use of “Zimbabwe” as a term of national reference dates from 1960 as a coinage by the black nationalist Michael Mawema, whose Zimbabwe National Party became the first to officially use the name in 1961. The term “Rhodesia” — derived from the surname of Cecil Rhodes, the primary instigator of British colonization of the territory during the late 19th century — was perceived by African nationalists as inappropriate because of its colonial origin and connotations.

According to Mawema, black nationalists held a meeting in 1960 to choose an alternative name for the country, proposing names such as “Matshobana” and “Monomotapa” before his suggestion, “Zimbabwe”, prevailed. A further alternative, put forward by nationalists in Matabeleland, had been “Matopos”, referring to the Matopos Hills to the south of Bulawayo.

It was initially unclear how the chosen term was to be used — a letter written by Mawema in 1961 refers to “Zimbabweland” — but “Zimbabwe” was sufficiently established by 1962 to become the generally preferred term of the black nationalist movement. In a 2001 interview, black nationalist Edson Zvobgo recalled that Mawema mentioned the name during a political rally, “and it caught hold, and that was that”. The black nationalist factions subsequently used the name during the Second Chimurenga campaigns against the Rhodesian government during the Rhodesian Bush War of 1964–1979. Major factions in this camp included the Zimbabwe African National Union (led by Robert Mugabe from 1975), and the Zimbabwe African People’s Union (led by Joshua Nkomo from its founding in the early 1960s). 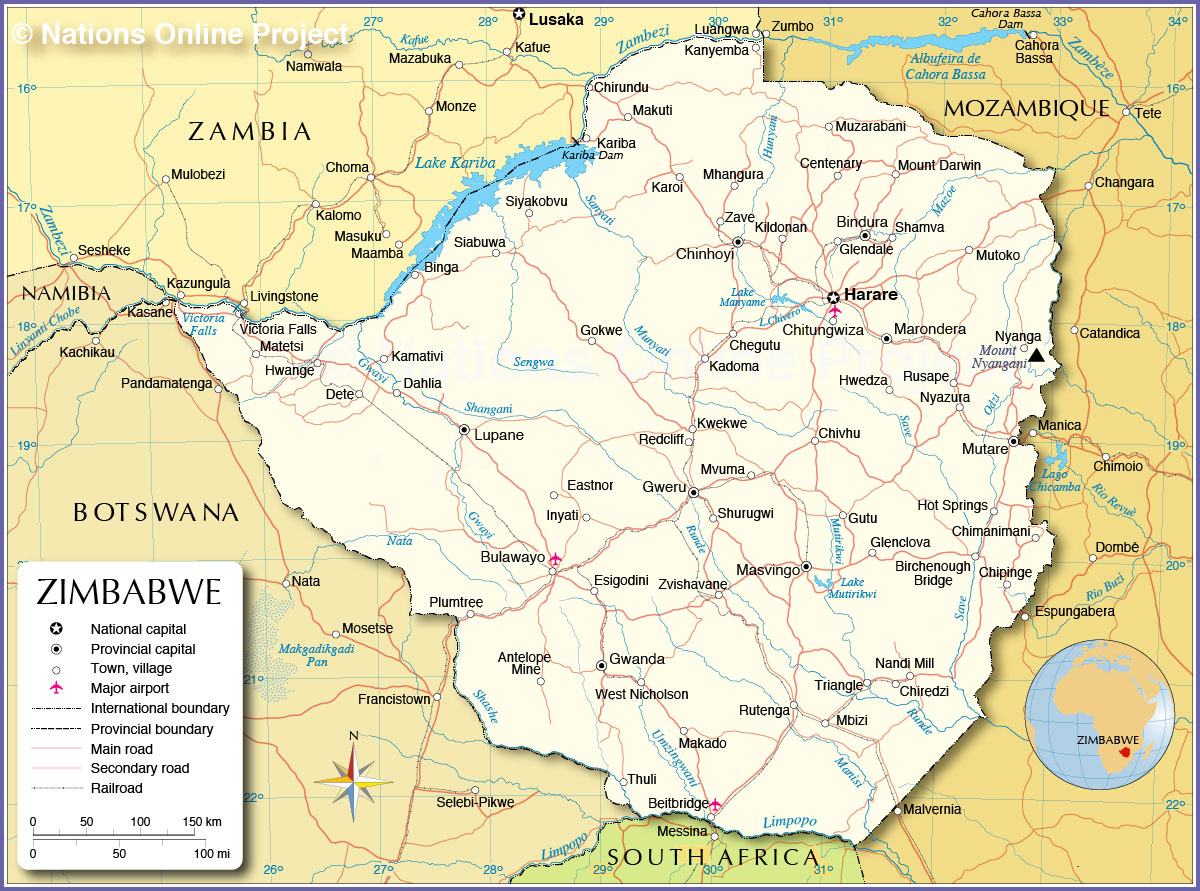 During elections in February 1980, Robert Mugabe and the ZANU party secured a landslide victory. Prince Charles, as the representative of Britain, formally granted independence to the new nation of Zimbabwe at a ceremony in Salisbury in April 1980.

Zimbabwe’s first president after its independence was Canaan Banana in what was originally a mainly ceremonial role as Head of State. Robert Mugabe, leader of the ZANU party, was the country’s first Prime Minister and Head of Government.

Opposition to what was perceived as a Shona takeover immediately erupted around Matabeleland. The Matabele unrest led to what has become known as Gukurahundi (Shona: “the early rain which washes away the chaff before the spring rains”).

Estimates for the number of deaths during the five-year Gukurahundi campaign ranged from 3,750 to 80,000.  Thousands of others were tortured in military internment camps.

Elections in March 1990 resulted in another victory for Mugabe and the ZANU-PF party, which claimed 117 of the 120 contested seats.

During the 1990s, students, trade unionists, and other workers often demonstrated to express their growing discontent with Mugabe and ZANU-PF party policies. In 1996, civil servants, nurses, and junior doctors went on strike over salary issues. The general health of the population also began to significantly decline; by 1997 an estimated 25% of the population had been infected by HIV in a pandemic that was affecting most of southern Africa.

Land redistribution re-emerged as the main issue for the ZANU-PF government around 1997. Despite the existence of a “willing-buyer-willing-seller” land reform programme since the 1980s, the minority white Zimbabwean population of around 0.6% continued to hold 70% of the country’s most fertile agricultural land.

In 2000, the government pressed ahead with its Fast Track Land Reform program, a policy involving compulsory land acquisition aimed at redistributing land from the minority white population to the majority black population. Confiscations of white farmland, continuous droughts, and a serious drop in external finance and other supports led to a sharp decline in agricultural exports, which were traditionally the country’s leading export-producing sector. Some 58,000 independent black farmers have since experienced limited success in reviving the gutted cash crop sectors through efforts on a smaller scale.

President Mugabe and the ZANU-PF party leadership found themselves beset by a wide range of international sanctions. In 2002, the nation was suspended from the Commonwealth of Nations due to the reckless farm seizures and blatant election tampering. The following year, Zimbabwean officials voluntarily terminated its Commonwealth membership.

The Zimbabwe Democracy and Economic Recovery Act of 2001 (ZDERA) went into effect in 2002, creating a credit freeze of the Zimbabwean government through Section 4 C, Multilateral Financing Restriction. The bill was sponsored by Bill Frist, and co-sponsored by senators Hillary Clinton, Joe Biden, Russ Feingold and Jesse Helms. Through ZDERA Section 4C, the Secretary of the Treasury is ordered to direct US Directors at the International Financial Institutions listed in Section 3, “to oppose and vote against– (1) any extension by the respective institution of any loan, credit, or guarantee to the Government of Zimbabwe; or (2) any cancellation or reduction of indebtedness owed by the Government of Zimbabwe to the United States or any international financial institution.”

Following elections in 2005, the government initiated Operation Murambatsvina”, an effort to crack down on illegal markets and slums emerging in towns and cities, leaving a substantial section of urban poor homeless. The Zimbabwean government has described the operation as an attempt to provide decent housing to the population, although according to critics such as Amnesty International, authorities have yet to properly substantiate their claims.

On March 29, 2008, Zimbabwe held a presidential election along with a parliamentary election. The results of this election were withheld for two weeks, after which it was generally acknowledged that the Movement for Democratic Change – Tsvangirai (MDC-T) had achieved a majority of one seat in the lower house of parliament.

In a surprising moment of candour at the ZANU-PF congress in December 2014, President Robert Mugabe accidentally let slip that the opposition had in fact won the contentious 2008 polls by an astounding 73%.

In late 2008, problems in Zimbabwe reached crisis proportions in the areas of living standards, public health (with a major cholera outbreak in December) and various basic affairs.

In September 2008, a power-sharing agreement was reached between Tsvangirai and President Mugabe, permitting the former to hold the office of prime minister. Due to ministerial differences between their respective political parties, the agreement was not fully implemented until February 13, 2009. By December 2010, Mugabe was threatening to completely expropriate remaining privately owned companies in Zimbabwe unless “western sanctions” were lifted.

A 2011 survey by Freedom House suggested that living conditions had improved since the power-sharing agreement. The United Nations Office for the Coordination of Humanitarian Affairs stated in its 2012–2013 planning document that the “humanitarian situation has improved in Zimbabwe since 2009, but conditions remain precarious for many people”.

On January 17, 2013, Vice President John Nkomo died of cancer at St Anne’s Hospital, Harare at the age of 78. A new constitution approved in the Zimbabwean constitutional referendum, 2013 curtails presidential powers.

Mugabe was re-elected president in the July 2013 Zimbabwean general election which The Economist described as “rigged.” and the Daily Telegraph as “stolen.” The Movement for Democratic Change alleged massive fraud and tried to seek relief through the courts. After winning the election, the Mugabe ZANU-PF government re-instituted one party rule, doubled the civil service and, according to The Economist, embarked on “…misrule and dazzling corruption.” A 2017 study conducted by the Institute for Security Studies (ISS) concluded that due to the deterioration of government and the economy “the government encourages corruption to make up for its inability to fund its own institutions” with widespread and informal police roadblocks to issue fines to travellers being one manifestation of this.

In July 2016, nationwide protests took place regarding the economic collapse in the country, and the finance minister admitted “Right now we literally have nothing.”

In November 2017, the army led a coup d’état following the dismissal of Vice President Emmerson Mnangagwa, placing Mugabe under house arrest. The army denied that their actions constituted a coup. Mugabe resigned on November 21, 2017, after leading the country for 37 years. Although under the Constitution of Zimbabwe Mugabe should be succeeded by Vice President Phelekezela Mphoko, a supporter of Grace Mugabe, ZANU-PF chief whip Lovemore Matuke stated to the Reuters news agency that Mnangagwa would be appointed as president.

The first stamps inscribed ZIMBABWE were issued on April 18,1980. Scott #724 was released on January 17, 1995, part of a set of 17 definitives. The 4-cent lithographed stamp portrays mine workers and is perforated 14. 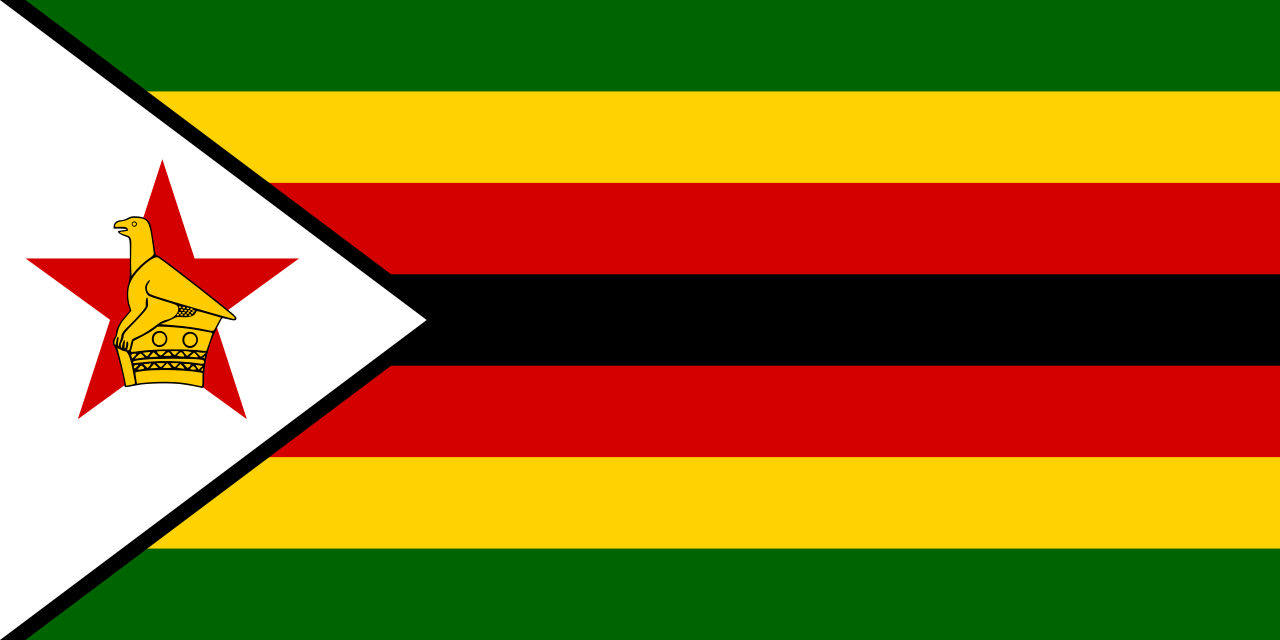 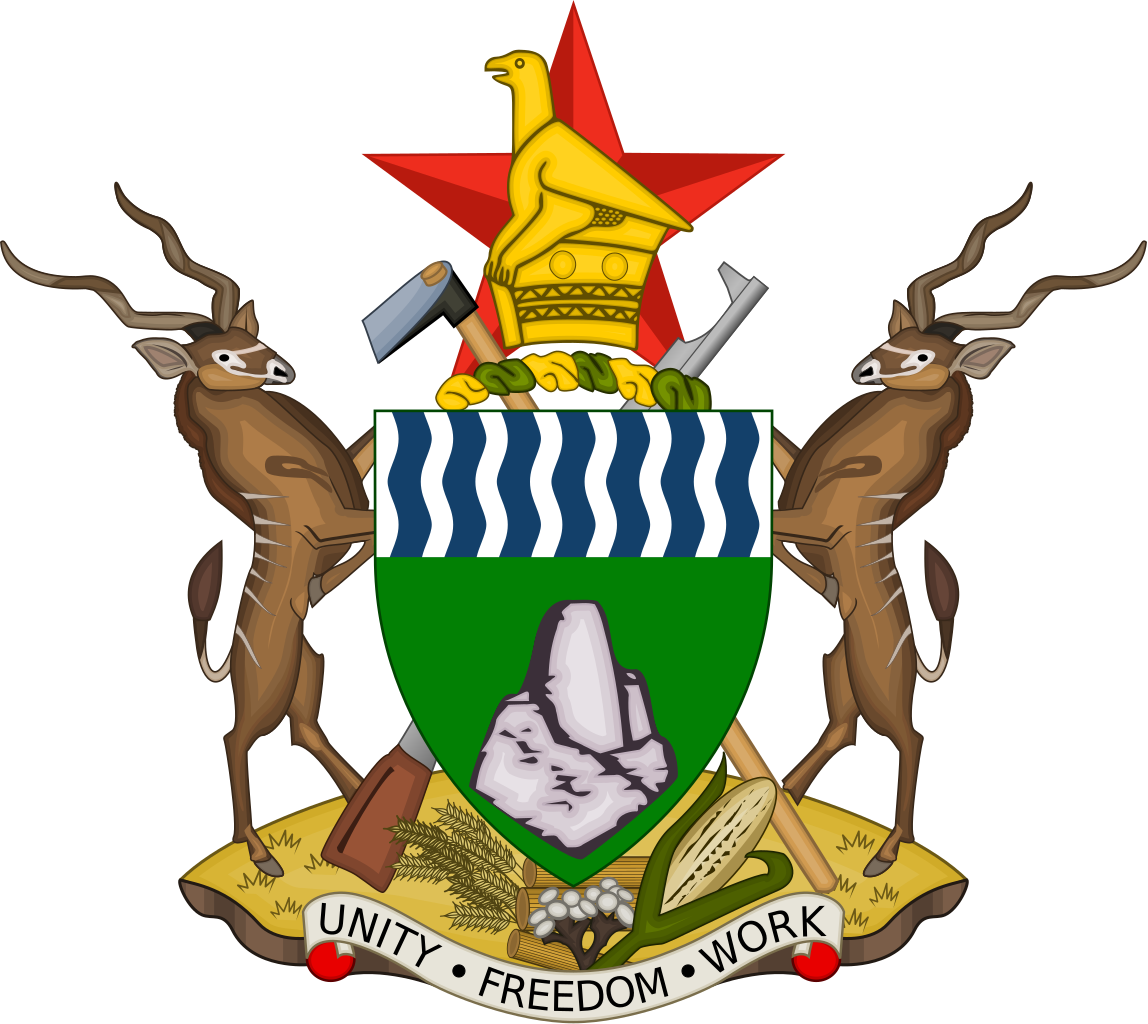