Today is the 106th anniversary of New Mexico Statehood. New Mexico (Nuevo México in Spanish or Yootó Hahoodzo in Navajo) was admitted to the United States as its 47th state on January 6, 1912, having been a Territory since September 9, 1850. Occupying 121,412 square miles (314,460 km²) of land in the southwest region of the U.S.A., it is often incorrectly believed to have taken its name from the nation of Mexico. Spanish explorers first recorded this region as Nuevo México in 1563, and again in 1581, when they incorrectly believed it contained wealthy Mexica Indian cultures similar to those of the Aztec Empire. Having been a resident of the state from 1996 until 2015, I still count it as my favorite place in which I’ve lived (Thailand being but a close second). As a result, I have written about the region on several occasions including a general overview and  history on last year’s Statehood Day (using U.S. Scott #1191), The Spanish explorers and conquistadores Hernando de Soto and Francisco Vázquez de Coronado y Luján who explored portions of what became the southern United States between 1540 and 1542 (U.S. Scott #898), the Gadsden Purchase of present-day southern Arizona and southwestern New Mexico in 1853 (U.S. Scott #1028), and Mexican revolutionary Pancho Villa’s March 1916 raid on the town of Columbus, New Mexico — the only time in the twentieth century that the continental United States was invaded by outside forces (U.S. Scott #3591). Today, I present one of many beloved symbols of the state — its award-winning beautiful flag. 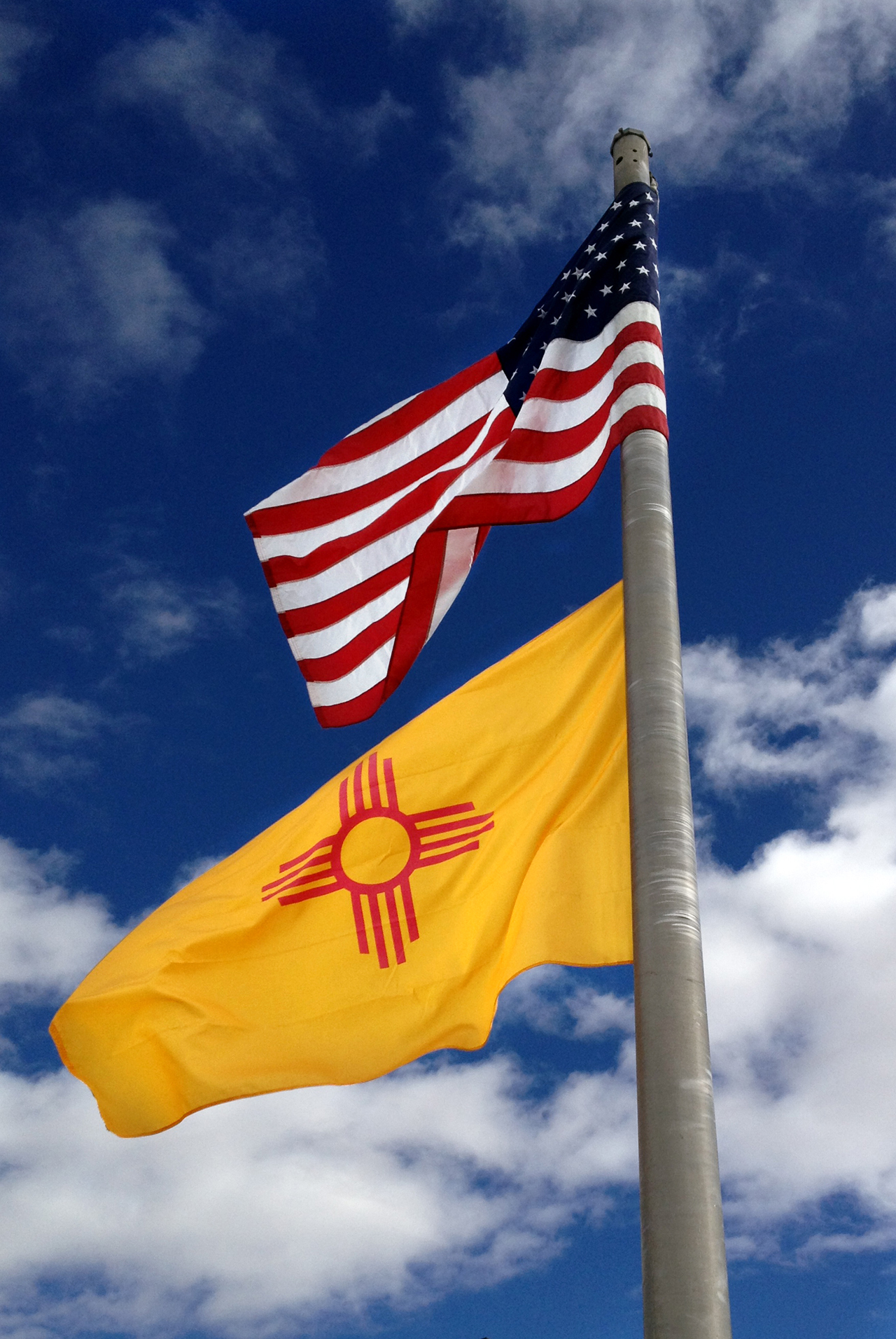 The flag of the state of New Mexico was officially introduced in 1925. It was designed in 1920, to highlight the state’s Native American Pueblo and Nuevo México Hispano roots. The colors evoke the flags of Habsburg Spain (the Cross of Burgundy) and the Crown of Aragon, brought by the conquistadors. At the time of its adoption, it was described thusly:

“That a flag be and the same is hereby adopted to be used on all occasions when the state is officially and publicly represented, with the privilege of use by all citizens upon such occasions as they may deem fitting and appropriate. Said flag shall be the ancient Zia sun symbol of red in the center of a field of yellow. The colors shall be the red and yellow of old Spain. The proportion of the flag shall be a width of two-thirds its length. The sun symbol shall be one-third of the length of the flag. Said symbol shall have four groups of rays set at right angles; each group shall consist of four rays, the two inner rays of the group shall be one-fifth longer than the outer rays of the group. The diameter of the circle in the center of the symbol shall be one-third of the width of the symbol. Said flag shall conform in color and design described herein.”
— New Mexico Statutes and Court Rules, Section 12-3-2[6]

It is one of four U.S. state flags not to contain the color blue (the other three being Alabama, California, and Maryland). The flag of the District of Columbia also has no blue. According to a 2001 survey by the North American Vexillological Association, New Mexico has the best-designed flag of any U.S. state, territory or Canadian province.

During the first 14 years of statehood, New Mexico did not have an official flag. During the San Diego World’s Fair of 1915, the fair featured an exhibit hall in which all the state flags were displayed. Since New Mexico did not have an official flag, an unofficial flag was displayed, consisting of a blue field with the United States flag in the upper left corner, the words “New Mexico” and “47” (because New Mexico is the 47th state) in silver lettering in the center of the flag, and the state seal in the bottom right corner. Some historical references (including Cram’s Unrivaled Atlas of the World) also show the words “The Sunshine State” wrapped around the seal in the lower right corner.

The Daughters of the American Revolution pushed New Mexico to design a contemporary and unique flag in 1920. A contest to design the new state flag was won by Harry Mera of Santa Fe, New Mexico. Mera was an archaeologist who was familiar with the Zia Sun symbol found at Zia Pueblo on a 19th-century pot. His winning design is the flag that the state uses today

The colors on New Mexico’s state flag are the red and yellow of old Spain. The simple, elegant center design is the ancient Zia Sun symbol, which represents the unique character of New Mexico. The Zia are an indigenous tribe centered at Zia Pueblo, known for their pottery and use of the Sun symbol. The people are a branch of the large Pueblo community. They regard the Sun as sacred. Their symbol for the sun — a red circle with groups of rays pointing in four directions — is painted on ceremonial vases, drawn on the ground around campfires, and used to introduce newborns to the Sun. 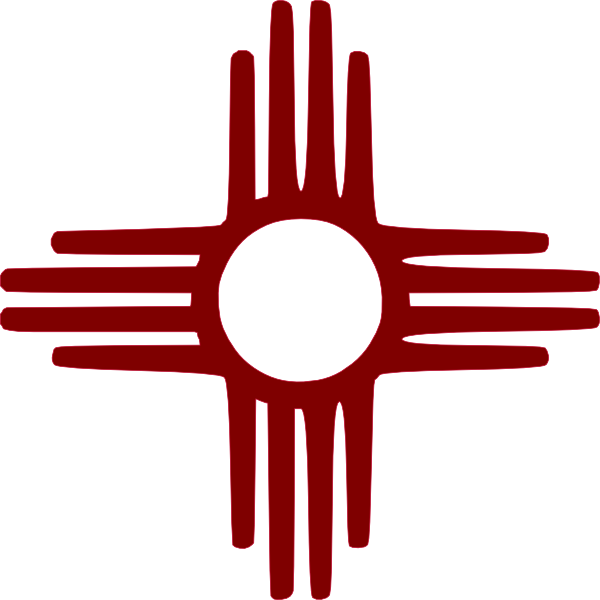 Four is the sacred number of the Zia and is seen repeated in the four points radiating from the circle, each consisting of four bars. To the Zia Indians, the number four represents:

The symbol is featured on the flag of New Mexico and in the design of both the New Mexico State Capitol and New Mexico’s State Quarter entry, as well as the state highway marker. It also appears on numerous other items, including the city flags of Albuquerque and Roswell. Given its history, the Pueblo would like people to first request permission before using it. 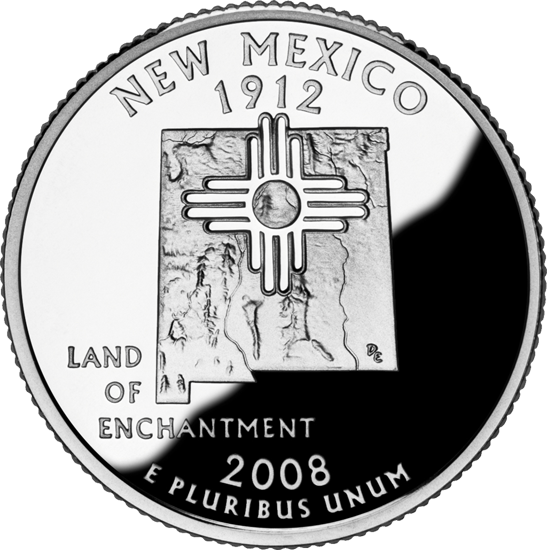 Starting in June 2008, the United States Postal Service began issuing a series of coil stamps under the title “Flags of Our Nation”. Several times each year, a set of ten stamps were released including one of the National Flag in each set and each of the states and territories in alphabetical order. These were printed using the photogravure process with vertical serpentine die cuts of 11 gauge. New Mexico’s turn came on April 16, 2010, when the set of ten containing Scott #4309 was issued in New York, NY. The New Mexico state flag had previously been featured as part of a sheet of 50 released as part of the American Bicentennial celebrations in 1976. 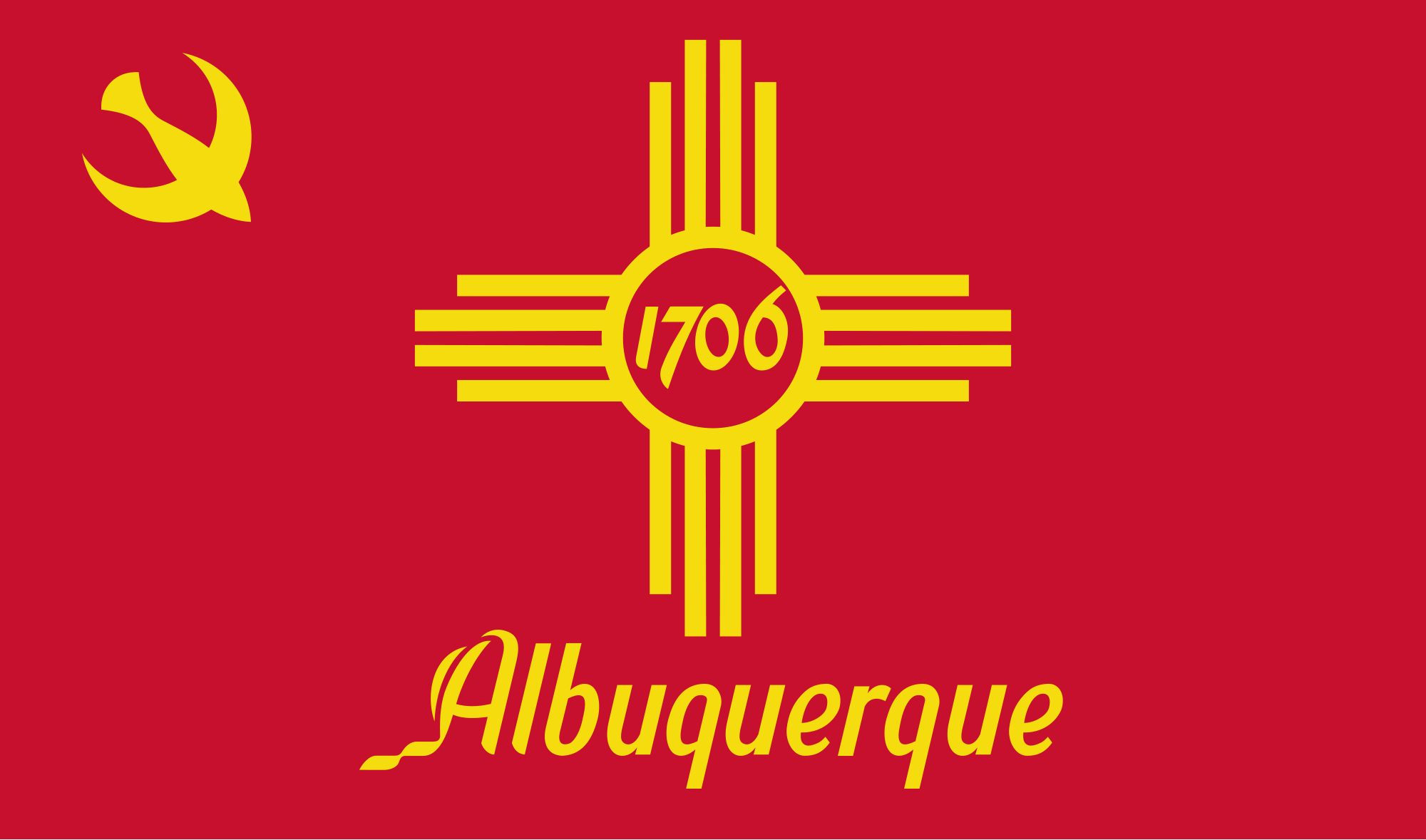