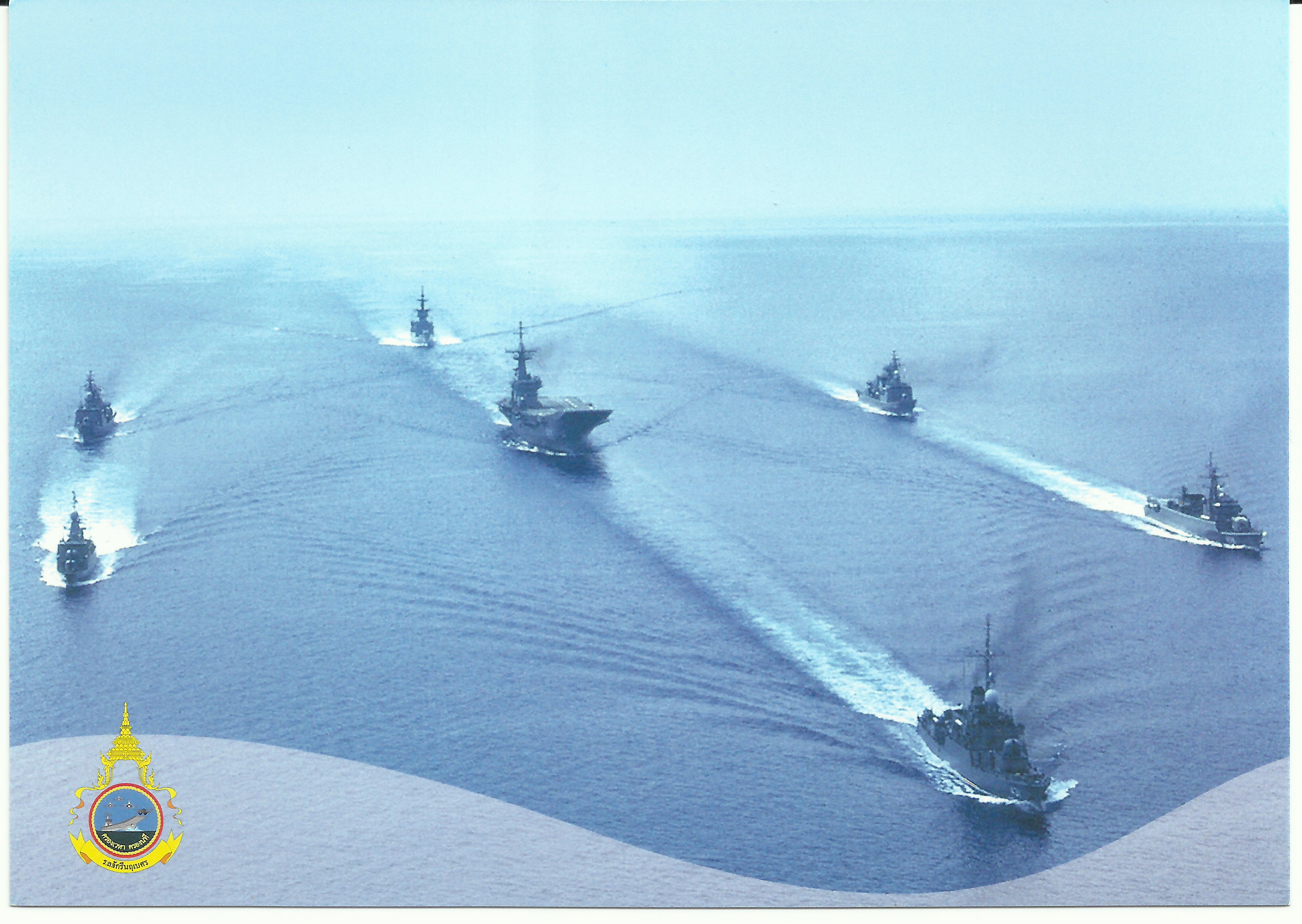 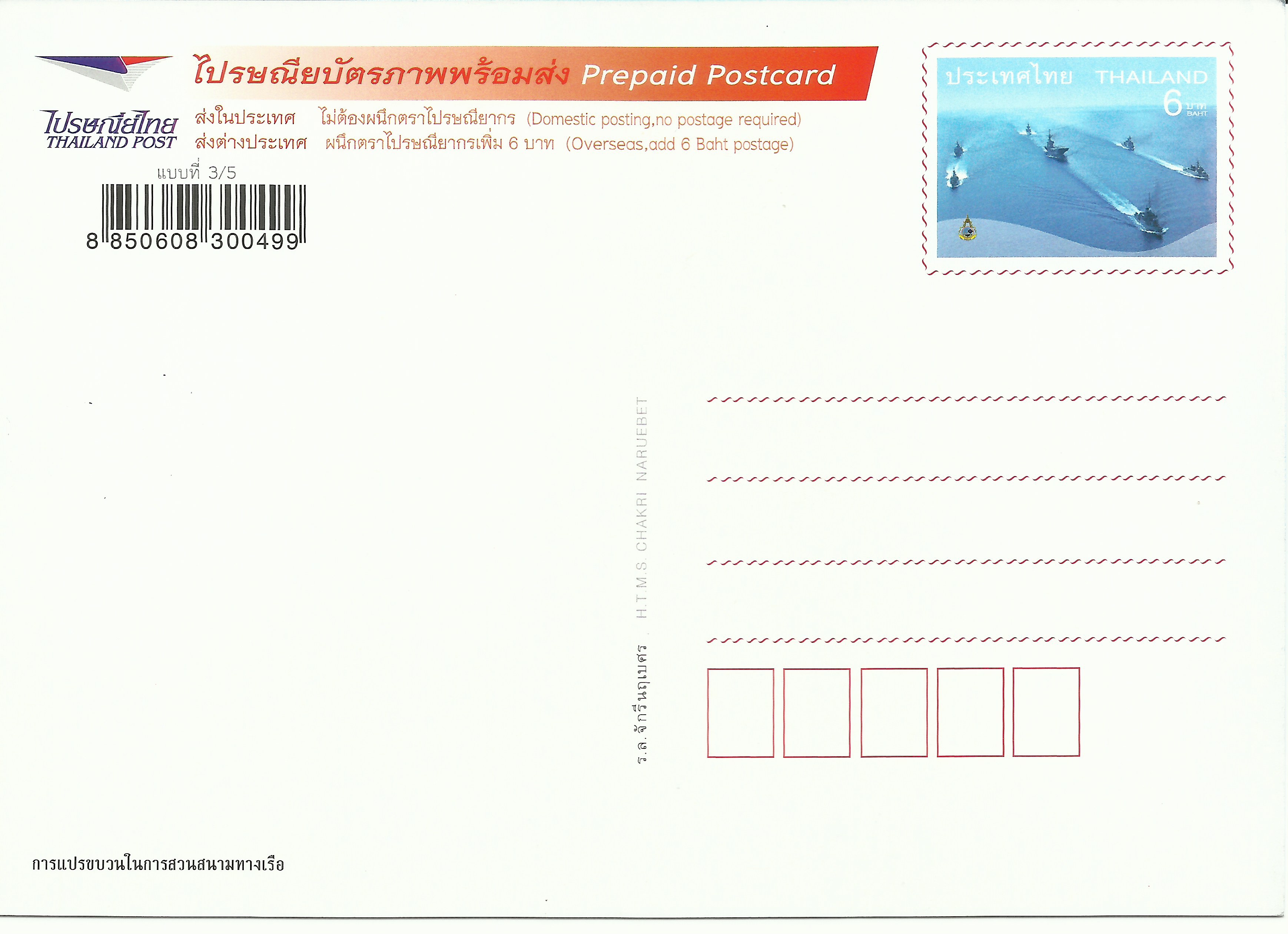 I began teaching English in Thailand in late March 2007. In recent years, many of my classes have been in non-traditional situations rather than regular in-school classrooms. Currently, I am attached to the Third Naval Area Command Headquarters of the Royal Thai Navy (กองทัพเรือไทย — Kong Thap Ruea Thai). This has been a very busy week teaching 6-hour lessons per day in English conversational skills to servicemen and officers at the HQ base high atop Cape Panwa on the southern island of Phuket. The meeting hall in which most of the classes are held has a beautiful view overlooking a bay dotted with islets and a number of small sailboats. This afternoon as I was in the last half-hour of class, one of the Navy’s Phutthayotfa Chulalok-class frigates steamed into view. I love my job!

My own naval background (other than a childhood interest developed through my grandfather’s tales of his exploits in the U.S. Navy’s Pacific Fleet during World War II, which included a period as the fleet’s cribbage champion), was three years during high school when I was a cadet in the U.S. Naval Junior Reserve Officer’s Training Corps (NJROTC). I was a Chief Petty Officer by the time I graduated. Thailand has honored the Royal Thai Navy with stamps and other philatelic items on numerous occasions. I have featured aspects of the RTN several times on ‘A Stamp A Day’ with articles about Royal Thai Navy Day, the Prince of Chumpon who is considered the “Father of the Royal Thai Navy”, Thai Navy Memorial Day, the Royal Barge Procession, and late King Bhumibol Adulyadej’s 85th birthday stamp on which His Majesty was portrayed his uniform with the rank of Chom Phon Ruea (จอมพลเรือ), or Admiral of the Fleet — the most senior naval officer rank of the Royal Thai Navy. 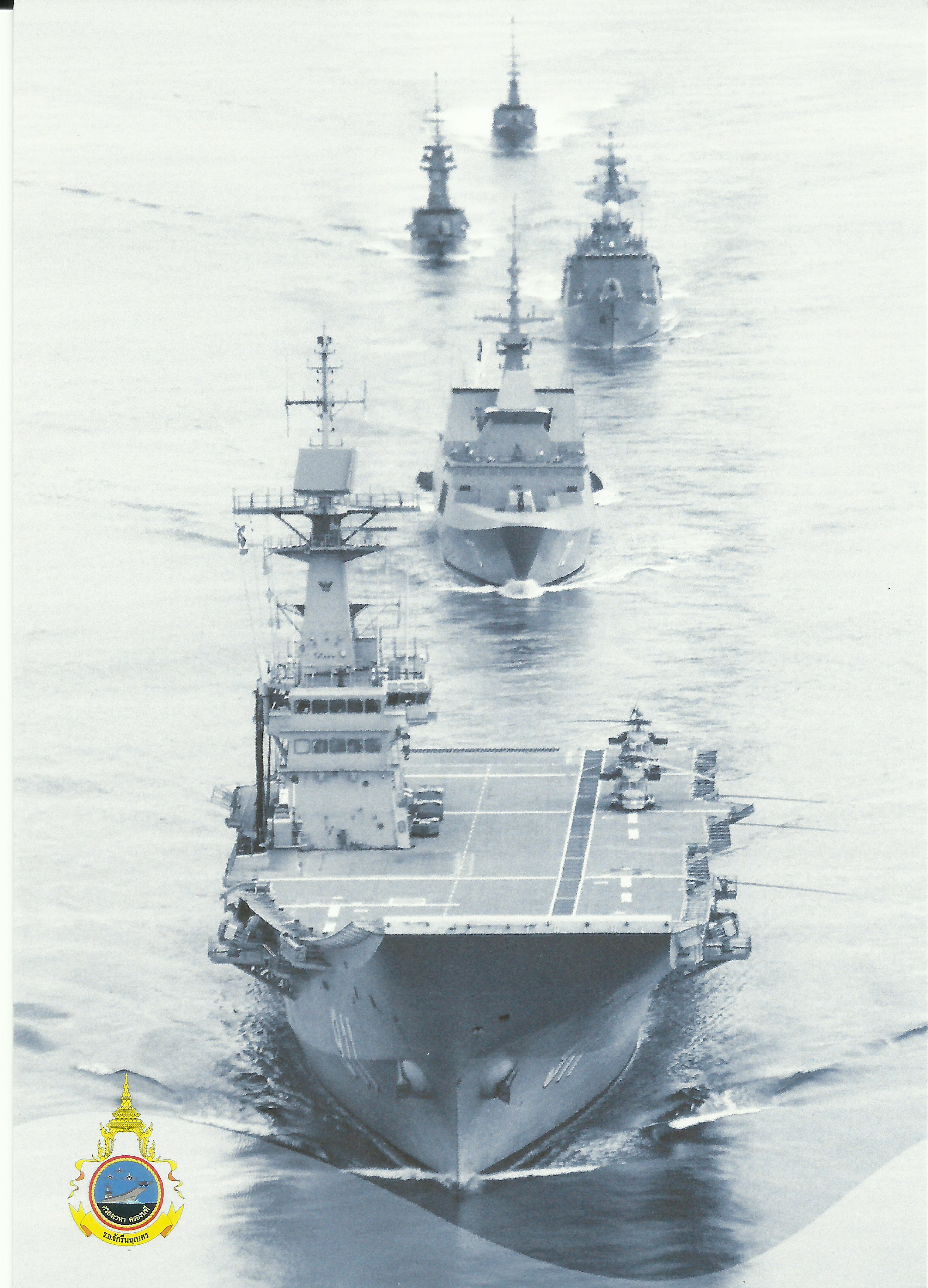 The Royal Thai Navy or RTN is the naval force of Thailand and part of the Royal Thai Armed Forces. It was established in the late-19th century. Similar to the organizational structure of the United States, the Royal Thai Navy includes the naval fleet and the Royal Thai Marine Corps. The Royal Thai Navy operates out of Sattahip Naval Base in Sattahip Bay. Thailand is the only Southeast Asian country that operates an aircraft carrier — HTMS Chakri Naruebet (CVH-911) — which is now used solely as a helicopter carrier with the retirement of the Harrier fighter wing. Thailand was the second Asian nation to acquire submarines, following Japan, but has had no submarines since 1950. It is currently negotiating with China with an aim to purchase modern submarines.

The mission space includes the Gulf of Thailand and the Indian Ocean, which are separated by land, as well as rivers. Naval affairs are directed by the country’s most senior admiral from his headquarters in Bangkok. The naval Commander-in-Chief is supported by staff groups that plan and administer such activities as logistics, education and training, and various special services. The headquarters general staff functions like those of corresponding staffs in the army and air force command structures. 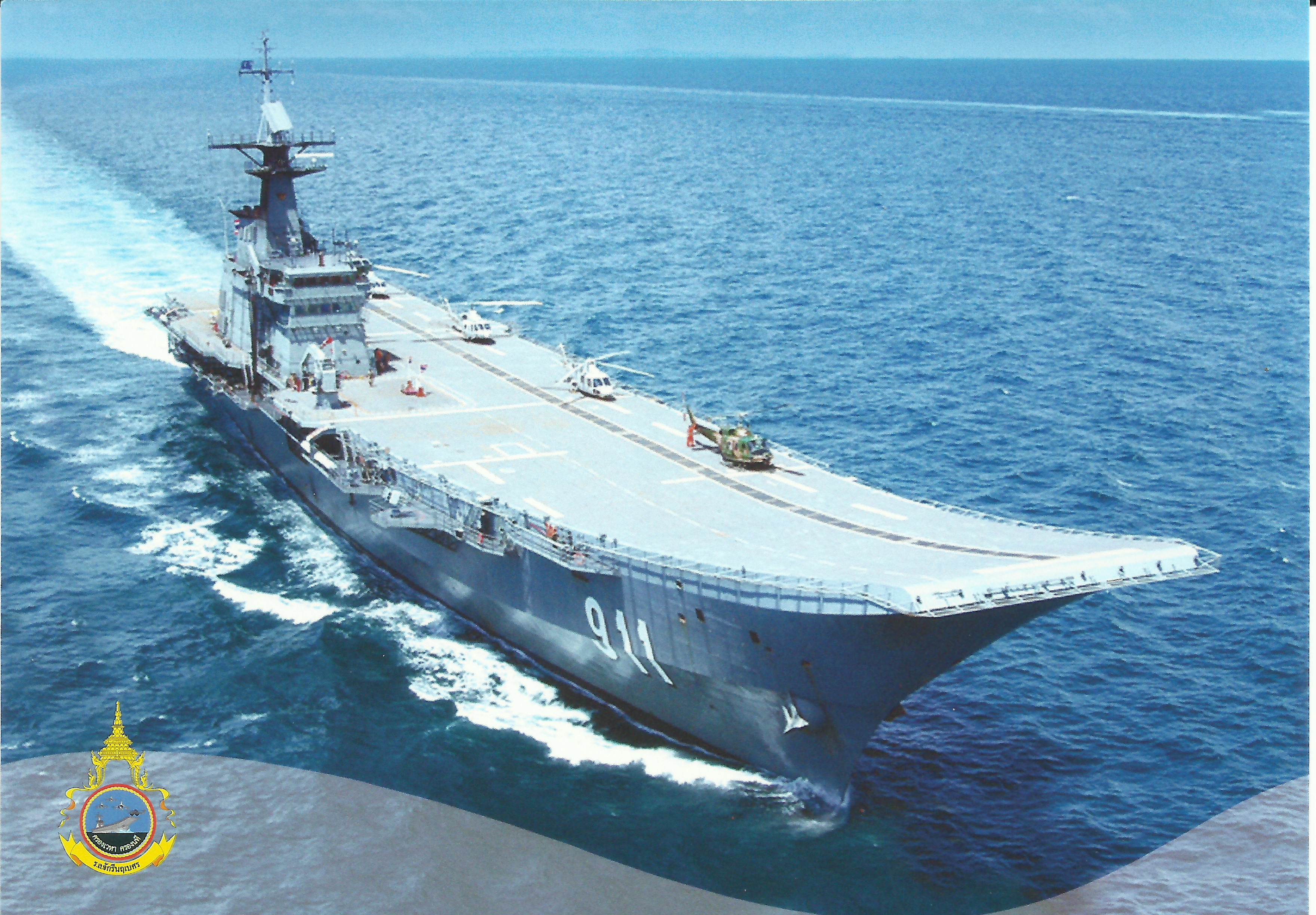 The Royal Thai Naval Air and Coastal Defense Command was formed in 1992 under the control of the Royal Fleet Headquarters, with one coastal defense regiment (equipped with 155 mm artillery) and one air defense regiment (equipped with 40 mm and 37 mm anti-aircraft guns as well as HN-5A MANPADs). Personnel were initially drawn from the Royal Thai Marine Corps, but are now being recruited directly. The First Coastal Defense Regiment is based near the Marine Corps facility at Sattahip.

Originally, the First Air Defense Regiment was near the Naval Air Wing at Utapao. The Coastal Defense Command was greatly expanded in 1992, following the government’s decision in 1988 to charge the RTN with the responsibility of defending the entire eastern seaboard and Southern Seaboard Development Project. The Second Air Defense Regiment, based at Songkhla, was then formed the following year. Some analysts believe that this element will eventually grow to a strength of up to 15,000 personnel. They are interested in S-300 or S-400 SAMs to upgrade their air defense system. 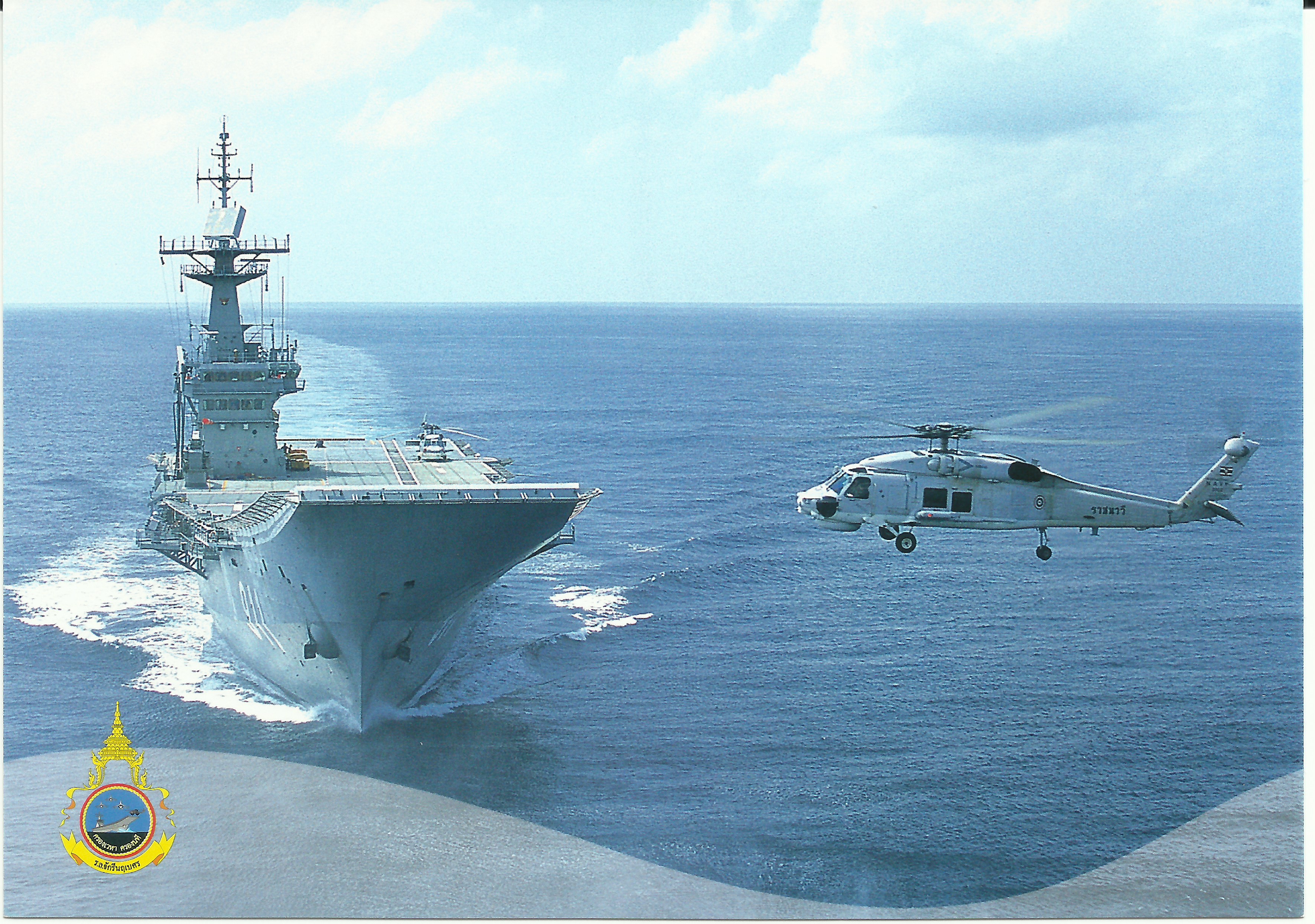 The Northern Gulf of Thailand Fleet, under the jurisdiction of the Navy Fleet District Forces consists of:

The Southern Gulf of Thailand Fleet consists of:

The Andaman Sea Fleet, based here in Phuket, includes:

Finally, there is HTMS Pin Klao (DE-1), launched on September 12, 1943, by the Western Pipe and Steel Company in San Francisco, California. She was commissioned as USS Hemminger (DE-746)  on May 30, 1944 — a Cannon-class destroyer escort in the United States Navy. During World War II, she served in the Pacific Ocean and provided escort service against submarine and air attack for Navy vessels and convoys. Detached from the Pacific Fleet following the war, Hemminger reached Norfolk, Virginia, on December, 1945, via Saipan, Pearl Harbor, San Diego, and the Panama Canal. Training out of Green Cove Springs, Florida, occupied Hemminger until she was decommissioned there on June 17, 1946, and went into reserve.

After a period of duty with the reserve training program, Hemminger was recommissioned at Norfolk, Virginia, on December 1, 1950. In the following years, her career assumed a pattern of local operations along the coast punctuated by reserve training cruises to Canada and the Caribbean. One reserve cruise in June 1952 took Hemminger to Lisbon, Portugal, while others saw her at Rouen, France; Barranquilla, Colombia; Cadiz, Spain, and New Orleans, Louisiana. The ship also participated in several fleet exercises and worked with the Turkish submarine Gur in August 1954. Departing Little Creek, Virginia, on November 23, 1957, she reported to New York Naval Shipyard for inactivation. Hemminger decommissioned there on February 21, 1958, and joined the Atlantic Reserve Fleet. She was loaned to Thailand on July 22, 1959, under the Military Assistance Program, and serves the Royal Thai Navy as HTMS Pin Klao, currently used as salute ship. 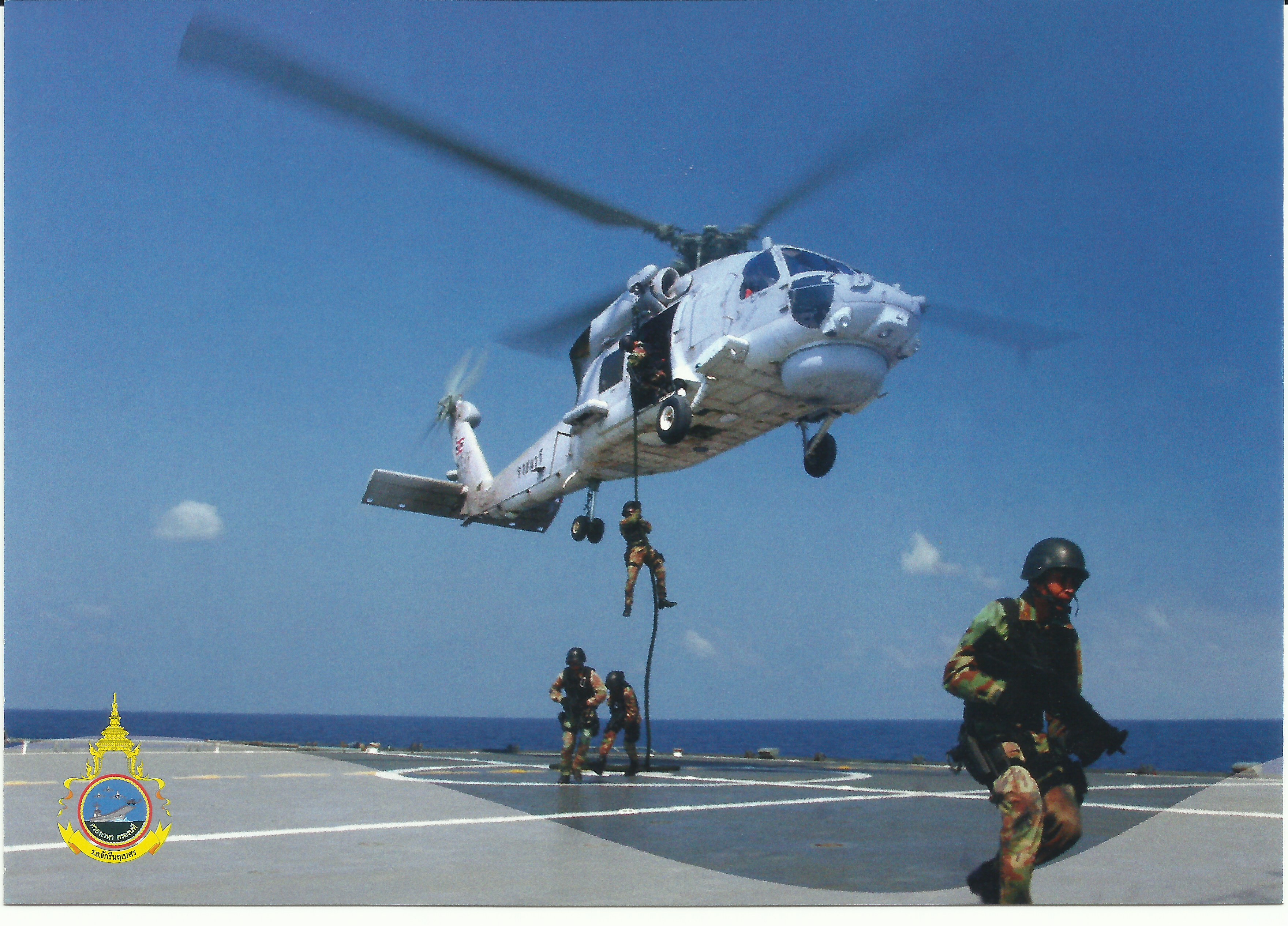 On July 2 2015, the Royal Thai Navy formally selected China’s Yuan-class (Type 041) to meet a requirement for three submarines. The RTN’s procurement committee voted unanimously in favor of purchasing the submarines, which has been designated S26T (Thailand), a modified export version of the Yuan-class. On July 1, 2016, the RTN submitted a funding plan for its 36 billion baht submarine procurement project to the cabinet for consideration with the expenditure to be spread over 11 years. In May 2017, the Royal Thai Navy and Thai Government signed a contract for one S26T variant of the submarine in a $390 million deal. Orders for an additional two submarines are expected in the coming years.

The first sub is expected to be delivered in about 2023. The Thai navy’s submarine squadron has trained in Germany and South Korea, its last sub was decommissioned in 1950. In July 2014, a US$17.3 million submarine headquarters and training center was opened at the Thai Navy’s largest port in Sattahip. Prime Minister Prayut Chan-o-cha explained that Thailand will buy submarines, “not for battle, but so that others will be in awe of us.” Deputy Prime Minister and Defence Minister Gen Prawit Wongsuwon said that “…growing territorial threats and an increasing number of maritime missions has prompted the navy to strengthen its submarine units.” There are plans to base one submarine at Mahidol Adulyadej Naval Dockyard in Sattahip District, Chonburi, one at a submarine dockyard off the Sattahip coastline, and one on the Andaman coast, in either Krabi or Phang Nga.

The Royal Thai Navy has two bases in its Air Force District Forces:

There are a total of seven bases operated by the RTN:

Thailand Post often releases postal stationery with little or no advanced notice, occasionally in conjunction with regular stamp issues. This set of five postcards was released on November 20, 2014 — Royal Thai Navy Day — along with a set of five general issue commemorative stamps and one souvenir sheet honoring the RTN and its aircraft carrier, HTMS Chakri Naruebet. That stamp set was profiled previously on ASAD in my Navy Day post for 2016. At the time the stamps were released, I did not know that the set of five pre-paid postcards existed. It was only by chance that I discovered them at the Phuket Philatelic Museum in early 2015. I purchased the last six sets they had, using many of them for trades with various postcard collectors. I only have two sets remaining. Tomorrow, after class, I will see if there is a base post office and attempt to have a set of cards postmarked if there is a special naval cancellation.

In closing, I’d like to mention that the 3rd Naval Area Command HQ at Laem Promthep, Phuket, Thailand, certainly stands high above any of my previous experiences with navy bases, particularly those where I underwent U.S. Navy training — NAS Great Lakes near Chicago, Illinois, and NAS North Island at San Diego, California. For one thing, the view is spectacular. While security is tight, all personnel has greeted me with smiles and enthusiasm. The food is pretty awesome, too: break-time snacks such as éclairs and chocolate cake, and meals of delicious Thai seafood. I won’t say the atmosphere at the Phuket Base is laid-back, but the officers and enlisted personnel here are famous in Thailand for the video below. Watch and enjoy: