Zil Elwannyen Sesel is the local Seychellois Creole name for the Outer Islands — a collective term for those islands of the Seychelles that are not on the shallow Seychelles Bank (Seychelles Plateau) which defines the location of the granitic Inner Islands archipelago to the east. The French name for these islands is Îles Eloignées. They are are located at distances of 143 to 715 miles (230 to 1150 km) from the main Seychelles island of Mahé, and are all of coral formation. The islands are outside the administrative and electoral Districts of Seychelles. From 1968 to 1976, the islands were part of the British Indian Ocean Territory but were transferred to the Seychelles when the islands became independent. On June 20, 1980, stamps were issued inscribed ZIL ELOIGNE SESEL and were sold from the M.V. Cinq-Juin which operated as a travelling post office. From 1982 to 1984, stamps were inscribed ZIL ELWAGNE SESEL and from 1984 to 1992, ZIL ELWANNYEN SESEL.

The Republic of Seychelles (République des Seychelles in French or Repiblik Sesel in Creole) is an archipelago and sovereign state in the Indian Ocean. The 115-island country, whose capital is Victoria, lies northeast of Madagascar and about 994 miles (1,600 km) east of Kenya on mainland eastern Africa. Other nearby island countries and territories include Comoros, Mayotte (region of France), Réunion (region of France) and Mauritius to the south. The majority of the islands are uninhabited, with many dedicated as nature reserves. A group of 42 islands, referred to as the inland islands, has a total area of 94 square miles (244 km²), comprising 54% of the total land area of the Seychelles and 98% of the entire population. With a population of roughly 94,228, it has the smallest population of any sovereign African country. For a history of the island nation, please see my previous A Stamp A Day article.

The coral islands are flat with elevated coral reefs at different stages of formation. They are generally low-lying, and often form atolls around a central lagoon. The soils of the corraline Seychelles are generally sandy and infertile, and hold little fresh water. The lack of natural fresh water sources and infertile soils of these islands can sustain human life only with difficulty. The Granitic Seychelles, by contrast, are composed of granite, and are ancient fragments of continental crust. They are generally more mountainous and humid. 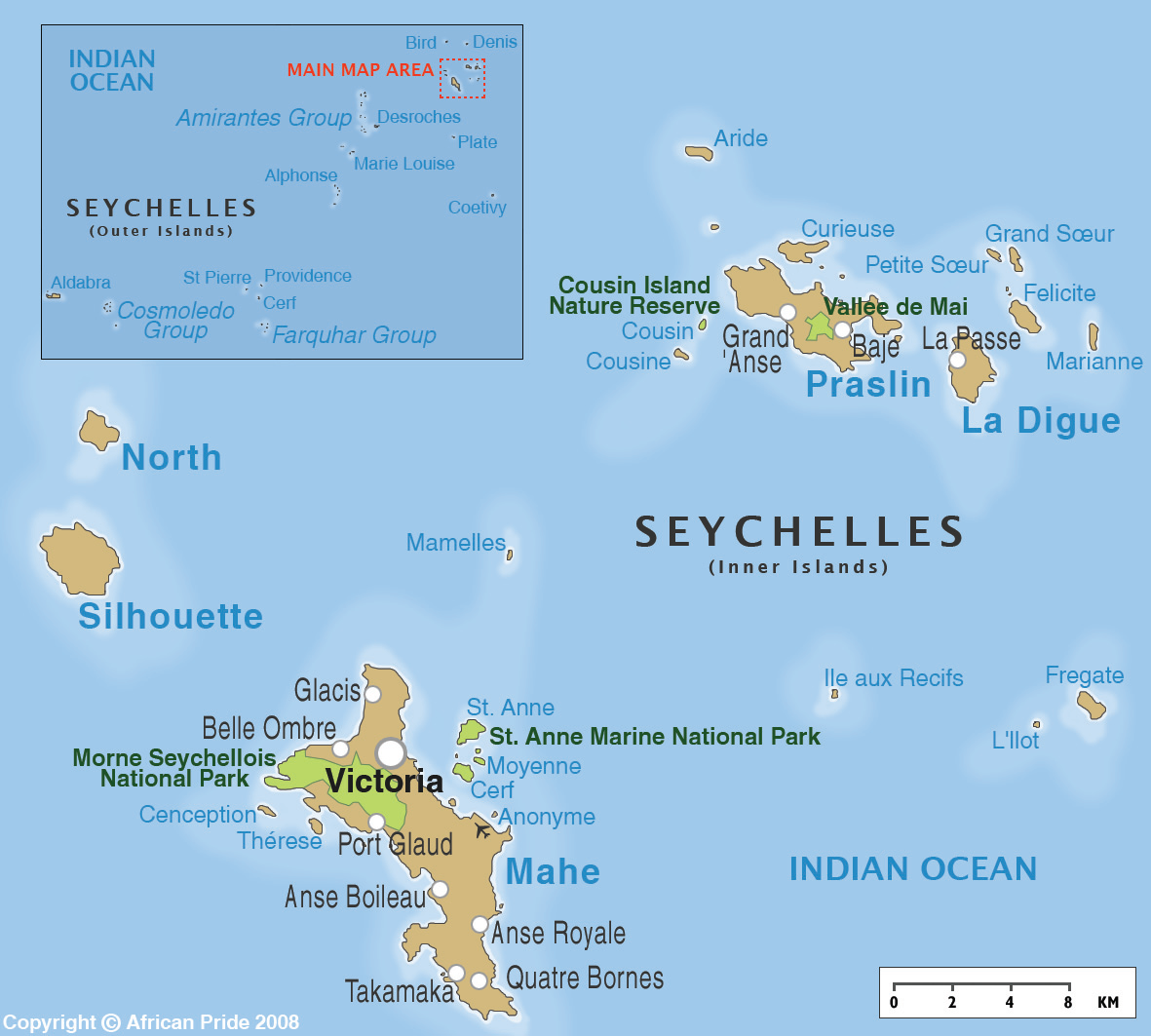 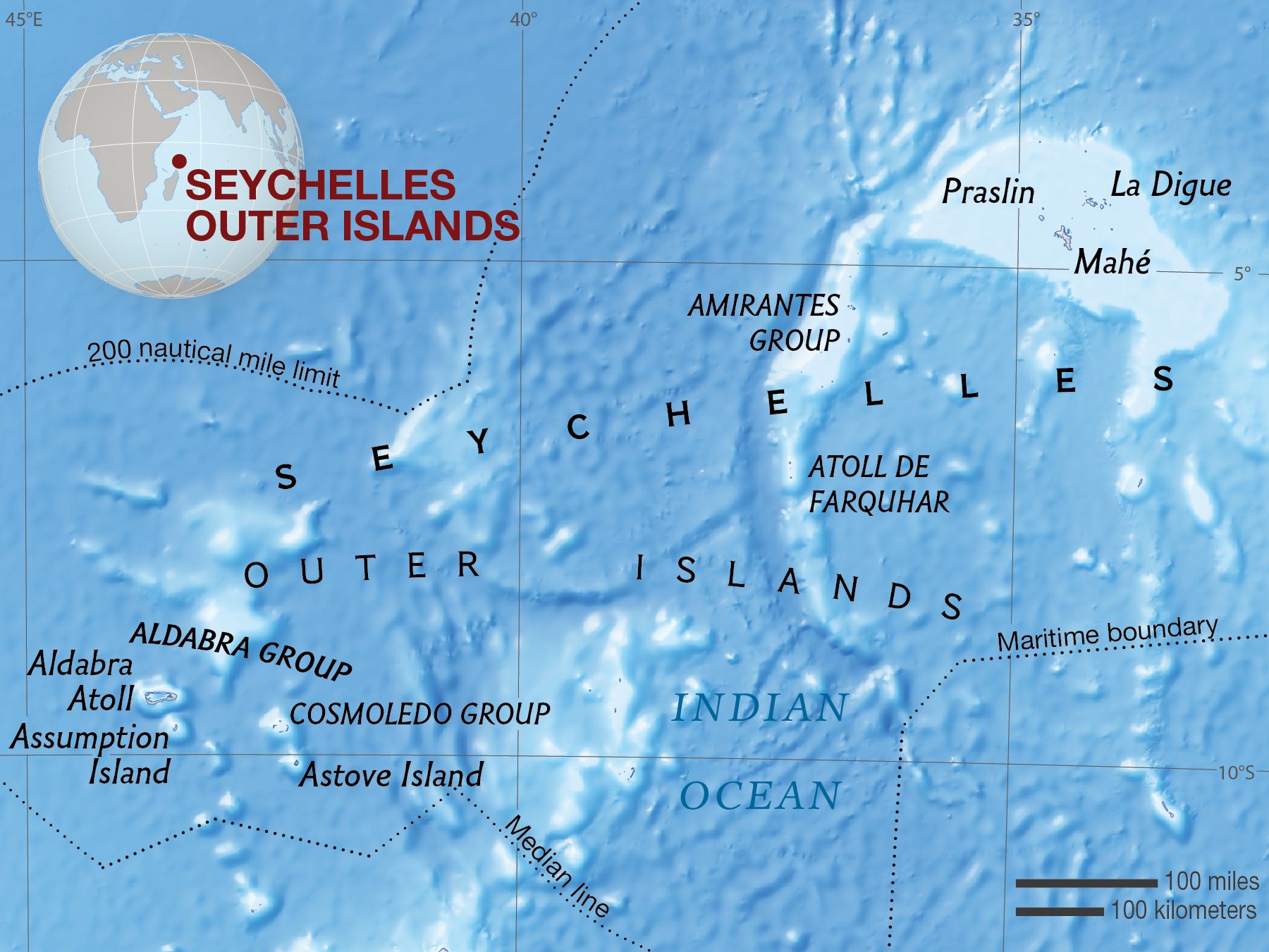 There are two coral sand cays north of the Granitics —Denis and Bird — and two coral islands south (called the Southern Coral Group of the Outer Islands) — Île Platte and Coëtivy Island.

The Outer Islands are comprised of five groups.

The Alphonse Group lie in the southwest of the island nation, 250 miles (403 km) southwest of the capital, Victoria, on Mahé Island. The closest island is Desnœufs Island of the Amirante Islands, 54 miles (87 km) further north. It consists of two atolls that are only 1.2 miles (two km) apart, separated by a deep channel: Alphonse Atoll in the north, with only one island, Alphonse Island, and St. François Atoll in the south, with the islands St. François and Bijoutier, Only Alphonse Island is inhabited. The aggregate land area of all three islets in both atolls is than 1 square mile (2.21 km²), but the total area including reefs and lagoons amounts to roughly 25 square miles (65 km²).

The aforementioned Southern Coral Group consists of two widely separated islands, with a distance of 106 miles (171 km) from one another. They are both sand cays, situated on the northeastern sides of pseudo-atolls: Île Platte in the north and Coëtivy Island in the southeast. This group has a total land area of 3,825 square miles (9.906 km²).

The Amirantes were discovered by Vasco da Gama on his second voyage of exploration in 1503, and later named Ilhas do Almirante (Admiral Islands). Previous knowledge of the islands by Arab and Indian traders is possible. The islands were claimed by Sieur Michel Blin for France in 1802. By the Treaty of Paris (1814), the islands were passed officially to the British, as a part of Mauritius. In 1909, the Seychelles became a separate colony, thereby including the Amirantes.

Farguhar Atoll was named in honor of Robert Townsend Farquhar in 1824. Previous visitors had named it after Portuguese explorer João da Nova who commanded that nation’s third expedition to India during which he encountered the atoll in 1504. Administration of the atoll was a grey area for many years, with both Mauritius and Seychelles claiming the right to administer it. In 1881, the authorities in Seychelles suggested Farquhar, along with several other outer islands, be administered from Victoria in Seychelles rather than from Mauritius. There were objections as the owners were based in Mauritius but after considerable argument, the owners lost their case and administration was passed from Mauritius to Seychelles. Fishing camps were established on north islands in 1850. In 1960, the village on the northern tip of South Island was abandoned.

In 1562, the whole of the Alphonse Group (Alphonse, St. François and Bijoutier) were collectively named on Portuguese charts as San Francisco. Chevalier Alphonse de Pontevez, commanding the French frigate Le Lys, visited on June 27, 1730, and gave the islands his own name. The following day, he visited and named the neighboring island of St. François possibly following the former Portuguese name for the group. The island was a private plantation and was only opened to the public in 1999 when a small resort hotel was built.

L’ile des Roches was named in 1771 by la Biolière, commander of the French vessel L’Etoile du Matin in honour of François Julien des Roches — Chevalier des Roches, the Governor of Île de France (now Mauritius) and Île Bourbon (now Réunion) from 1767 to 1772. It was explored by the Chevalier de la Billioère in 1771. The British had originally named it Wood Island because of its dense tree vegetation. The first settlement was established in 1835 and Desroches Island became an important producer of copra.  Along with the remaining Amirante Islands, Desroches had been a part of the Seychelles since it became a separate colony in 1909.

Assumption Island was discovered by Captain Nicolas Morphey on August 14, 1756, and was named after the religious feast of the next day. In 1908, the island was leased to H. Savy of Mahé, who built a coconut plantation on the island. The first settlement was in the northern part of the island. During a visit two years later, he realized the guano potential of the island. The villagers transferred their labor force to guano mining camp, that operated until 1983. The camp was the location of the current village. After that, the villagers were employed as fishermen, usually of bêche-de-mer, until it was declared protected. In the mid-1960s, the island was proposed as an American military base, including a deep sea port. After strong protests from environmental organizations, this plan was rejected. In 1990 The airfield was built.

Until 2008, the islands were outside the administrative and electoral Districts of Seychelles. In 2008, the shrimp farm closed on Coëtivy Island which caused a wave of job-seekers coming to Mahé. The ministry of tourism was granted a free hand on these islands in order to settle down the unrest of the population, and declared it a district.

It formed the Islands Development Company (IDC) to control the islands, and prepared a program called 1 Hotel 1 Island. Each island in the group was to be leased to a hotel, which would in turn built several residential homes and facilities on those islands. It required removal of the PA from the islands. At first finding hotel chains was difficult, so Coëtivy received a prison, and thus creating jobs for the people who came back to their island. Other islands received questionable facilities as well including a jail on Marie Louise Island and an Army base on Assumption Island, Other islands had developments of resorts. The population increased again for the first time in a century, from 500 in 2008 to 700 in 2016.

Conservation in the outer islands is managed by Island Conservation Society. The Save Our Seas Foundation manages the nature preserve of D’Arros Island and its neighboring atolls. 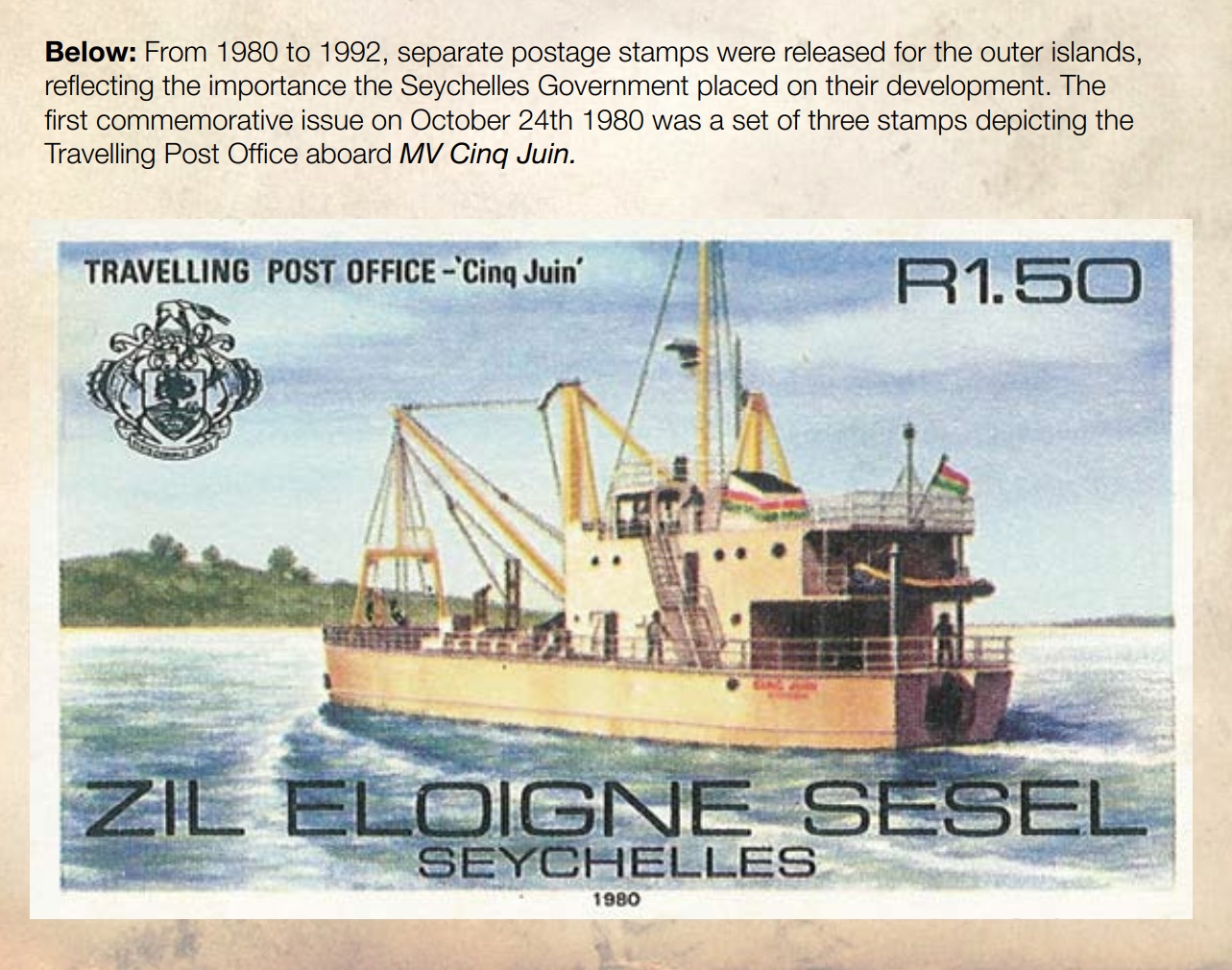 The first stamp issue to be inscribed ZIL ELOIGNE SESEL was a set of sixteen (Scott#1-16) released on June 20, 1980, using the design of the 1977-1978 series of Seychelles definitives depicting fish. These were imprinted 1980 below the design; twelve of these were later re-issued inscribed 1981. On October 24, 1980, a set of three was released (Scott #17-19) which included a stamp picturing M.V. Cinq Juin, the vessel on which the stamp issues were sold. This “travelling post office”, built as a 56-meter landing craft and named after Liberation Day on June 5, 1977,  was first employed by the Seychelles Navy and later by the parastatal Union Lighterage Corporation (ULC). In 1983, Cinq Juin was chartered for use in a United Nations relief operation in Mozambique to deliver food and supplies to counter famine in the African country. IDC took custody of the vessel in 1992. after which it was used for transporting equipment like bulldozers and other heavy machinery and supplies until late 2004.

On June 23, 1981, stamps imprinted ZIL ELOIGNE SESEL were released using the design type of the Seychelles to mark the Royal Wedding of Prince Charles and Lady Diana Spencer, the topic of an ASAD article last July. There were a total of six watermarked stamps printed by the House of Questa Ltd., perforated 14 (Scott #23-28). The designs included stamps depicting the Royal Couple in denominations of 40 cents, 5 rupees and 10 rupees with a different Royal Yacht on each, plus matching denominations in double-width stamps featuring a congratulatory message in between individual portraits. These were released in sheets of seven with six of the smaller stamps and one of the wide ones. A souvenir sheet was also issued bearing a single 7.50-rupee stamp with the “Congratulations” message, perforated 12½x12 (Scott #29). Additionally, the 40-rupee design picturing HMY Royal Escape was issued in booklet panes of four on unwatermarked paper, perforated 12½x12 (Scott #23a), while the wide 5-rupee stamp with the message exists in booklet panes of two, perforated 12½x12 on unwatermarked paper (Scott #26a). The basic sheet stamps were surcharged with new, lower values, and released in 1983 (Scott #70-75).

Scott #25 has a denomination of 5 rupees and features HMY Victoria and Albert II, the second royal yacht to bear the name of Queen Victoria and her consort, Prince Albert (see yesterday’s article on ASAD for more about this royal couple). The first was a twin-paddle steamer launched on April 25, 1843, and operated while owned and operated by the Royal Navy as the first royal yacht to be steam powered, being fitted with a 430 horsepower (320 kW) engine. Steam yachts, first introduced in 1823, became popular amongst Victorian millionaires and royalty around Europe. The Victoria and Albert made twenty voyages before being renamed Osborne after the launch of HMY Victoria and Albert II on January 16, 1855.

Her Majesty’s Yacht Osborne continued in service, conveying the Royal Family to their summer home, Osborne House, on the Isle of Wight. She was named after the Queen’s new estate. On February 15, 1862, the Prince of Wales boarded Osborne at Triest, having arrived by train. The Royal party stopped at Venice, the Dalmatian Coast, Corfu and Ionian Islands. She received a 21 gun salute at Alexandria. The tour continued via Jaffa, Constantinople, Athens, Malta and France, to return by train. Osborne was scrapped in 1868.

In 1865, the Egyptian royal yacht El Horreya (الحرية‎, “Freedom”) was built by the Samuda Brothers on the River Thames to the same specifications as HMY Victoria and Albert II for Isma’il Pasha, the Khedive of Egypt. Lengthened in 1872 and 1905, the vessel is currently named El Mahrousa (المحروسة‎, literally “The Protected”) and serves as Egypt’s presidential yacht, the oldest steamship afloat. 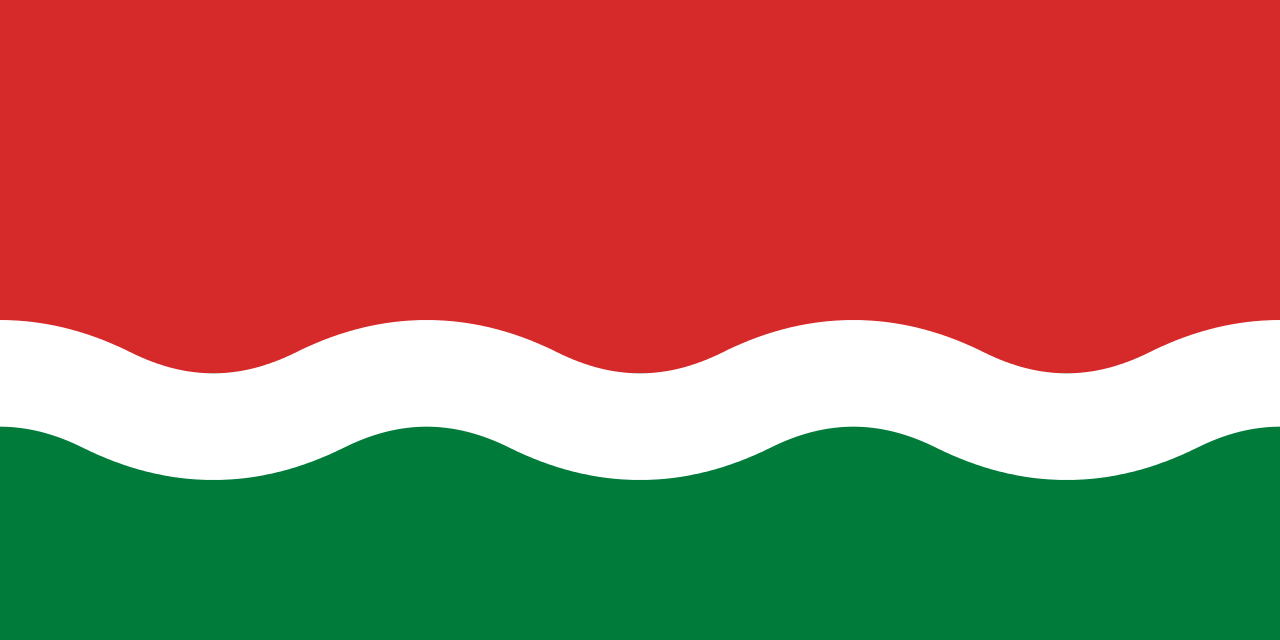