On February 25, 1928, Bryce Canyon National Park in the  United States was established. Located in southwestern Utah, the major feature of the park is Bryce Canyon, which despite its name, is not a canyon, but a collection of giant natural amphitheaters along the eastern side of the Paunsaugunt Plagteau. Bryce is distinctive due to geological structures called hoodoos, formed by frost weathering and stream erosion of the river and lake bed sedimentary rocks. The red, orange, and white colors of the rocks provide spectacular views for park visitors. Bryce sits at a much higher elevation than nearby Zion National Park. The rim at Bryce varies from 8,000 to 9,000 feet (2,400 to 2,700 m).

The Bryce Canyon area was settled by Mormon pioneers in the 1850s and was named after Ebenezer Bryce, who homesteaded in the area in 1874. The area around Bryce Canyon was originally designated as a national monument by President Warren G. Harding in 1923 and was redesignated as a national park by Congress in 1928. The park covers 35,835 acres (55.992 square miles; 14,502 hectares; 145.02 square kilometers) and receives substantially fewer visitors than Zion National Park (nearly 4.3 million in 2016) or Grand Canyon National Park (nearly 6 million in 2016), largely due to Bryce’s more remote location. In 2016, Bryce Canyon received 2,365,110 recreational visitors, representing an increase of 35% from the prior year.

When my little sister, Marilyn, and I were young, our family took many summer trips to the various National Park Service holdings in the American Southwest. I have vague memories of at least one trip to Bryce Canyon, recalling a view of Rainbow Bridge and I even had a jacket patch as a souvenir for a number of years. My memories of Bryce Canyon actually seem a bit more clear than those of a visit to Grand Canyon which possibly occurred during the same trip. Those early family trips instilled a love and respect for the natural beauty of not only the United States but throughout the world that continues to this day. Because of this, I am quite concerned about what the current U.S. Secretary of the Interior — Ryan Zinke — intends to do with many of the nation’s parklands. 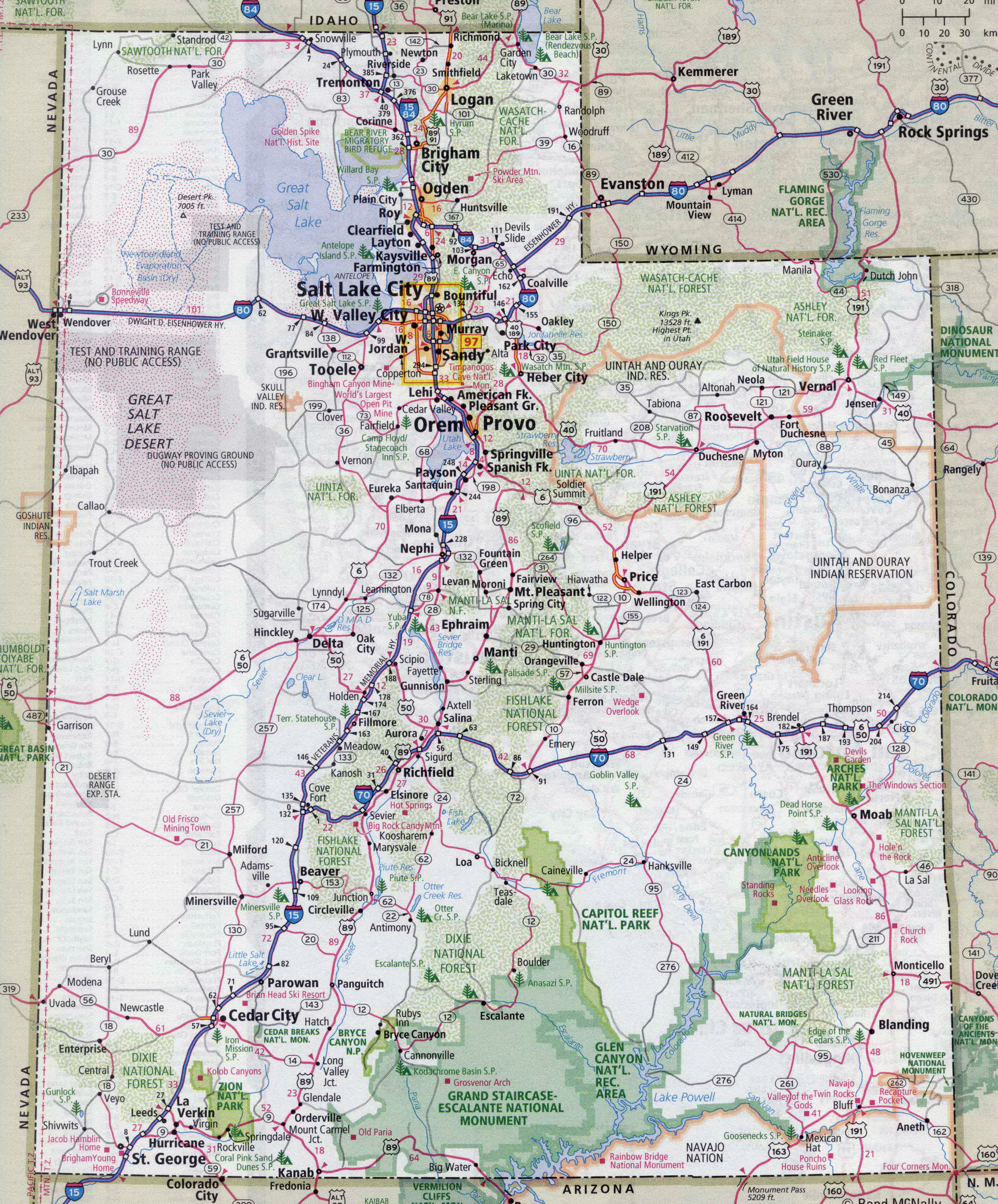 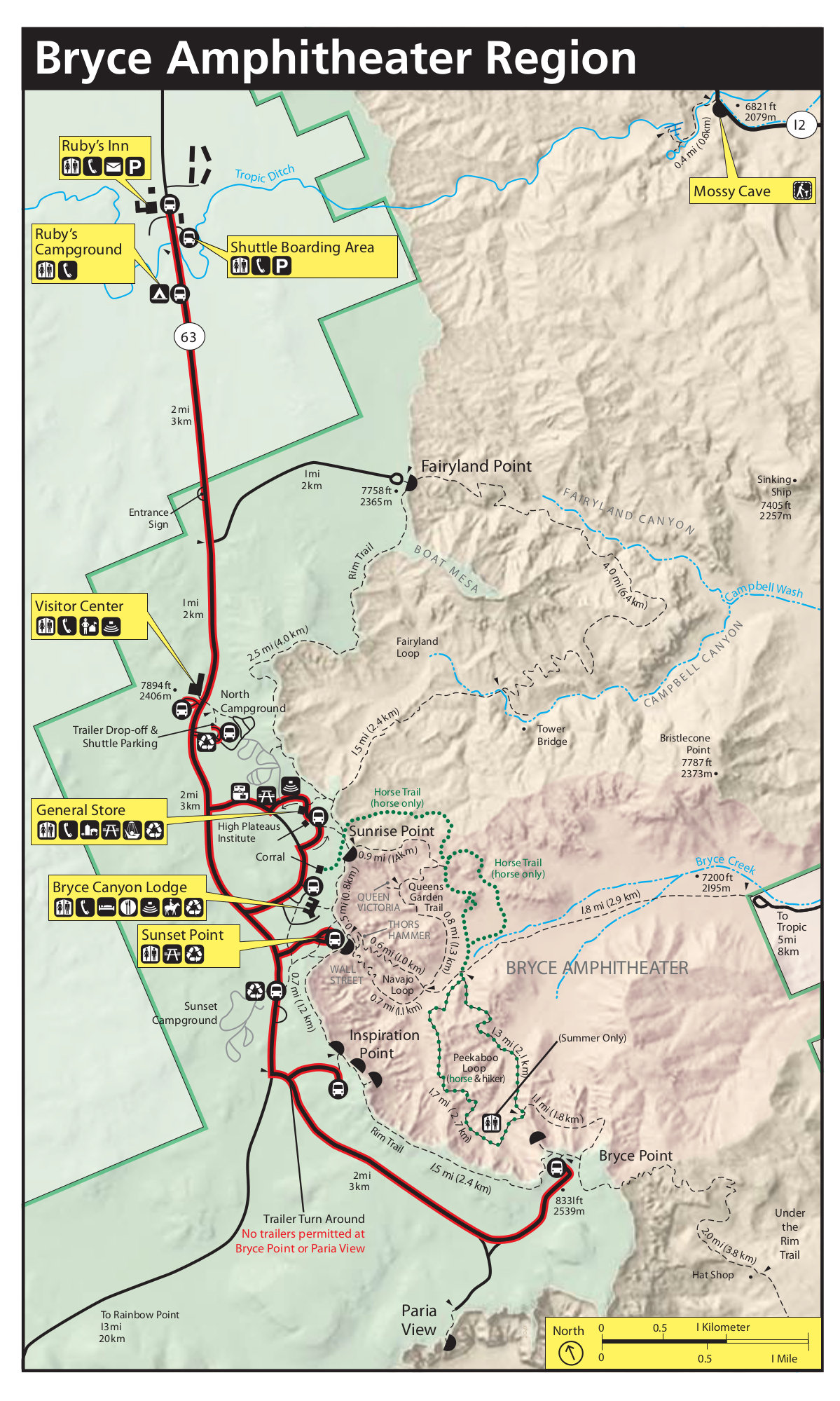 The national park lies within the Colorado Plateau geographic province of North America and straddles the southeastern edge of the Paunsaugunt Plateau west of the Paunsaugunt Fault (Paunsaugunt is Paiute for “home of the beaver”). Park visitors arrive from the plateau part of the park and look over the plateau’s edge toward a valley containing the fault and the Paria River just beyond it (Paria is Paiute for “muddy or elk water”). The edge of the Kaiparowits Plateau bounds the opposite side of the valley.

Bryce Canyon was not formed from erosion initiated from a central stream, meaning it technically is not a canyon. Instead headward erosion has excavated large amphitheater-shaped features in the Cenozoic-aged rocks of the Paunsaugunt Plateau. This erosion exposed delicate and colorful pinnacles called hoodoos that are up to 200 feet (60 m) high. A series of amphitheaters extends more than 20 miles (30 km) north-to-south within the park. The largest is Bryce Amphitheater, which is 12 miles (19 km) long, 3 miles (5 km) wide and 800 feet (240 m) deep. A nearby example of amphitheaters with hoodoos in the same formation but at a higher elevation, is in Cedar Breaks National Monument, which is 25 miles (40 km) to the west on the Markagunt Plateau.

Little is known about early human habitation in the Bryce Canyon area. Archaeological surveys of Bryce Canyon National Park and the Paunsaugunt Plateau show that people have been in the area for at least 10,000 years. Basketmaker Anasazi artifacts several thousand years old have been found south of the park. Other artifacts from the Pueblo-period Anasazi and the Fremont culture (up to the mid-12th century) have also been found.

The Paiute Indians moved into the surrounding valleys and plateaus in the area around the same time that the other cultures left. These Native Americans hunted and gathered for most of their food, but also supplemented their diet with some cultivated products. The Paiute in the area developed a mythology surrounding the hoodoos (pinnacles) in Bryce Canyon. They believed that hoodoos were the Legend People whom the trickster Coyote turned to stone. At least one older Paiute said his culture called the hoodoos Anka-ku-was-a-wits, which is Paiute for “red painted faces”.

It was not until the late 18th and the early 19th century that the first European Americans explored the remote and hard-to-reach area. Mormon scouts visited the area in the 1850s to gauge its potential for agricultural development, use for grazing, and settlement.The first major scientific expedition to the area was led by U.S. Army Major John Wesley Powell in 1872. Powell, along with a team of mapmakers and geologists, surveyed the Sevier and Virgin River area as part of a larger survey of the Colorado Plateaus. His mapmakers kept many of the Paiute place names.

Small groups of Mormon pioneers followed and attempted to settle east of Bryce Canyon along the Paria River. In 1873, the Kanarra Cattle Company started to use the area for cattle grazing. The Church of Jesus Christ of Latter-day Saints sent Scottish immigrant Ebenezer Bryce and his wife Mary to settle land in the Paria Valley because they thought his carpentry skills would be useful in the area. The Bryce family chose to live right below Bryce Amphitheater — the main collection of hoodoos in the park. Bryce grazed his cattle inside what are now park borders, and reputedly thought that the amphitheaters were a “helluva place to lose a cow.” He also built a road to the plateau to retrieve firewood and timber, and a canal to irrigate his crops and water his animals. Other settlers soon started to call the unusual place “Bryce’s canyon”, which was later formalized into Bryce Canyon.

A combination of drought, overgrazing and flooding eventually drove the remaining Paiutes from the area and prompted the settlers to attempt construction of a water diversion channel from the Sevier River drainage. When that effort failed, most of the settlers, including the Bryce family, left the area. Bryce moved his family to Arizona in 1880. The remaining settlers dug a 10-mile (16 km) ditch from the Sevier’s east fork into Tropic Valley.

These scenic areas were first described for the public in magazine articles published by Union Pacific and Santa Fe railroads in 1916. People like Forest Supervisor J. W. Humphrey promoted the scenic wonders of Bryce Canyon’s amphitheaters, and by 1918 nationally distributed articles also helped to spark interest. However, poor access to the remote area and the lack of accommodations kept visitation to a bare minimum.

At the same time, conservationists became alarmed by the damage overgrazing, logging, and unregulated visitation were having on the fragile features of Bryce Canyon. A movement to have the area protected was soon started, and National Park Service Director Stephen Mather responded by proposing that Bryce Canyon be made into a state park. The governor of Utah and the Utah State Legislature, however, lobbied for national protection of the area. Mather relented and sent his recommendation to President Warren G. Harding, who on June 8, 1923, declared Bryce Canyon a national monument.

A road was built the same year on the plateau to provide easy access to outlooks over the amphitheaters. From 1924 to 1925, Bryce Canyon Lodge was built from local timber and stone. Members of the United States Congress started work in 1924 on upgrading Bryce Canyon’s protection status from a national monument to a national park in order to establish Utah National Park. A process led by the Utah Parks Company for transferring ownership of private and state-held land in the monument to the federal government started in 1923. The last of the land in the proposed park’s borders was sold to the federal government four years later, and on February 25, 1928, the renamed Bryce Canyon National Park was established.

In 1931, President Herbert Hoover annexed an adjoining area south of the park, and in 1942 an additional 635 acres (257 ha) was added. This brought the park’s total area to the current figure of 35,835 acres (14,502 ha). Rim Road, the scenic drive that is still used today, was completed in 1934 by the Civilian Conservation Corps. Administration of the park was conducted from neighboring Zion National Park until 1956, when Bryce Canyon’s first superintendent started work.

Bryce Canyon Natural History Association (BCNHA) was established in 1961. It runs the bookstore inside the park visitor center and is a non-profit organization created to aid the interpretive, educational and scientific activities of the National Park Service at Bryce Canyon National Park. A portion of the profits from all bookstore sales are donated to public land units.

Responding to increased visitation and traffic congestion, the National Park Service implemented a voluntary, summer-only, in-park shuttle system in June 2000. In 2004, reconstruction began on the aging and inadequate road system in the park.

Most park visitors sightsee using the scenic drive, which provides access to 13 viewpoints over the amphitheaters. Bryce Canyon has eight marked and maintained hiking trails that can be hiked in less than a day. Mossy Cave (one hour, trailhead on State Route 12 northwest of Tropic), Rim Trail (5–6 hours, start anywhere on rim), Bristlecone Loop (one hour, trailhead at Rainbow Point), and Queens Garden (1–2 hours, start at Sunrise Point) are easy to moderate hikes. Navajo Loop (1–2 hours, from Sunset Point) and Tower Bridge (2–3 hours, trailhead is north of Sunrise Point) are moderate hikes. Fairyland Loop (4–5 hours, trailhead at Fairyland Point) and Peekaboo Loop (3–4 hours, from Bryce Point) are strenuous hikes. Several of these trails intersect, allowing hikers to combine routes for more challenging hikes.

The park also has two trails designated for overnight hiking: the 9-mile (14 km) Riggs Spring Loop Trail and the 23-mile (37 km) Under-the-Rim Trail. Both require a backcountry camping permit. In total there are 50 miles (80 km) of trails in the park.

More than 10 miles (16 km) of marked but ungroomed skiing trails are available off of Fairyland, Paria, and Rim trails in the park. Twenty miles (32 km) of connecting groomed ski trails are in nearby Dixie National Forest and Ruby’s Inn.

The air in the area is so clear that on most days from Yovimpa and Rainbow points, Navajo Mountain and the Kaibab Plateau can be seen 90 miles (140 km) away in Arizona. On extremely clear days, the Black Mesas of eastern Arizona and western New Mexico can be seen some 160 miles (260 km) away.

The park also has a 7.4 magnitude night sky, making it one of the darkest in North America. Stargazers can, therefore, see 7,500 stars with the naked eye, while in most places fewer than 2,000 can be seen due to light pollution, and in many large cities only a few dozen can be seen. Park rangers host public stargazing events and evening programs on astronomy, nocturnal animals, and night sky protection. The Bryce Canyon Astronomy Festival, typically held in June, attracts thousands of visitors. In honor of this astronomy festival, Asteroid 49272 was named after the national park.

Scott #C139 was issued on February 24, 2006. to pay the 63¢ letter rate to Mexico and Canada, the seventh issue of the Scenic American Landscapes Series. Although this was printed by the Banknote Corporation of America for Sennett Security Products, I find the lithographic process used to be somewhat lacking. All of my copies of this stamp have surface abrasions resulting in missing ink spots and lines. I also find it was odd that the first day of issue city was St. Louis, Missouri. The stamp is self-adhesive with 100,000,000 copies printed with serpentine die-cut perforations of 10¾. 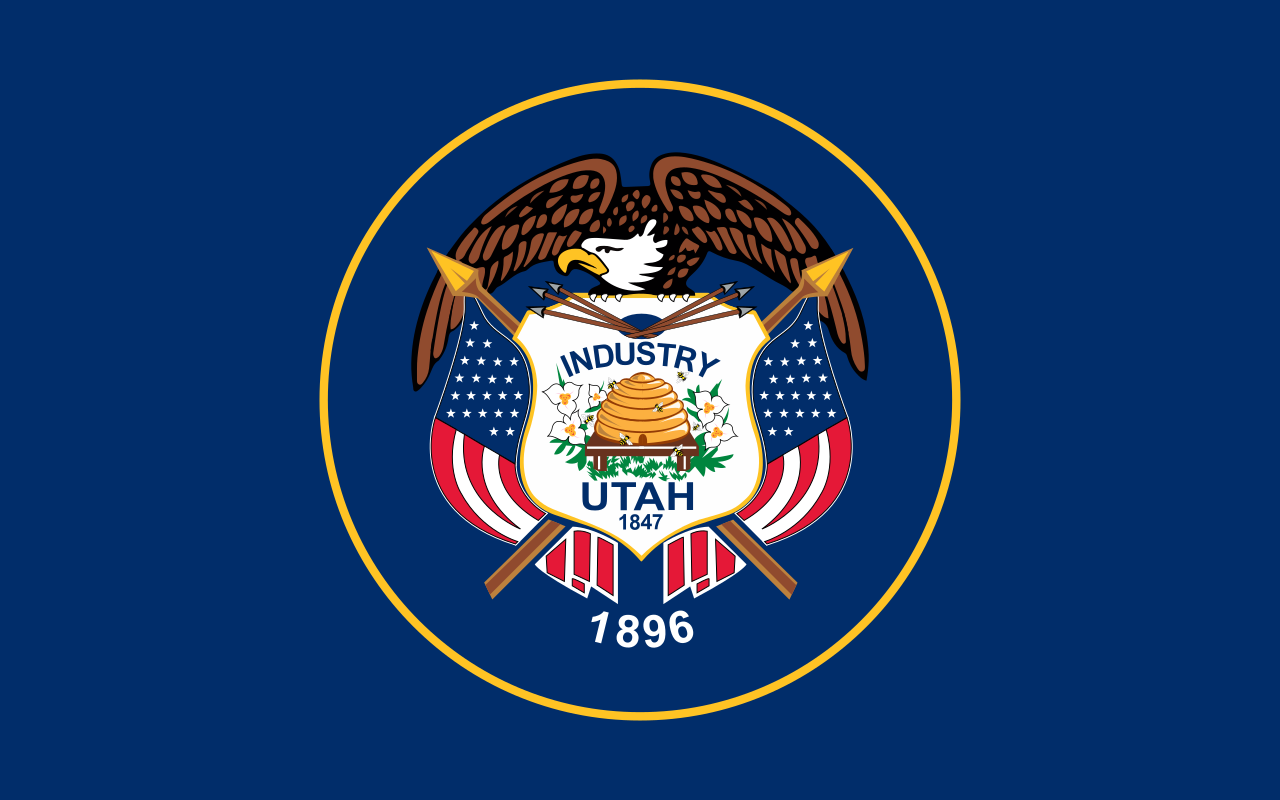 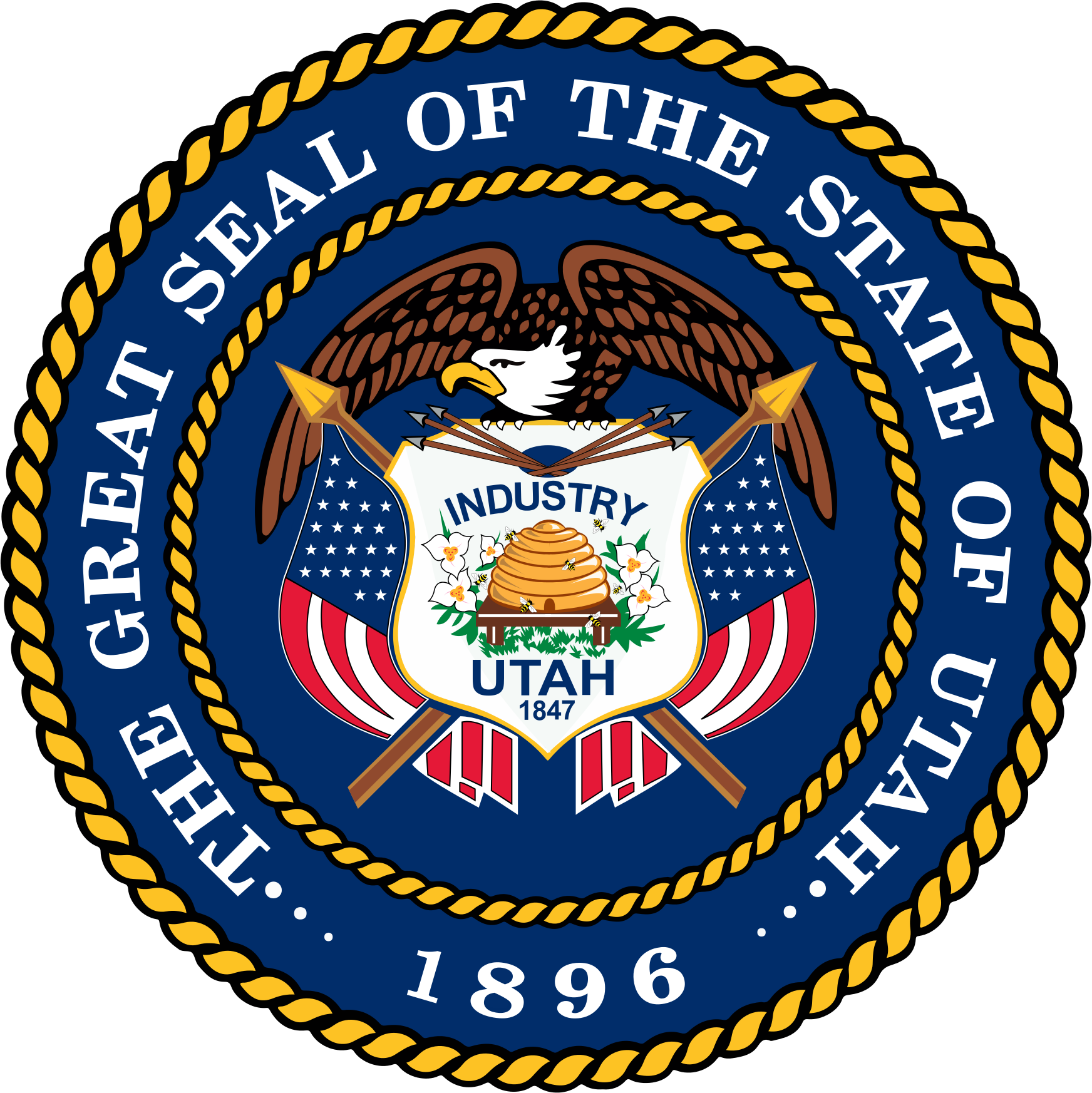