Today is the full moon of the third Thai lunar month (called simply duean song, or “month 3”), which is celebrated here — and in other Buddhist nations such as Cambodia, Laos, Sri Lanka, and Myanmar — as Wan Makha Bucha (วันมาฆบูชา), the second most important Buddhist festival. The spiritual aims of the day are not to commit any kind of sins; do only good; purify one’s mind. Also commonly rendered as Māgha Pūjā, it is a public holiday in several Southeast Asian countries and is an occasion when Buddhists go to the temple to perform merit-making activities. In Sri Lanka, this full moon day is called Navam Poya.

On Makha Bucha Day, Buddhists celebrate the creation of an ideal and exemplary community, which is why it is sometimes called Saṅgha Day. The Saṅgha refers to the Buddhist community, and for some Buddhist schools this is specifically the monastic community. 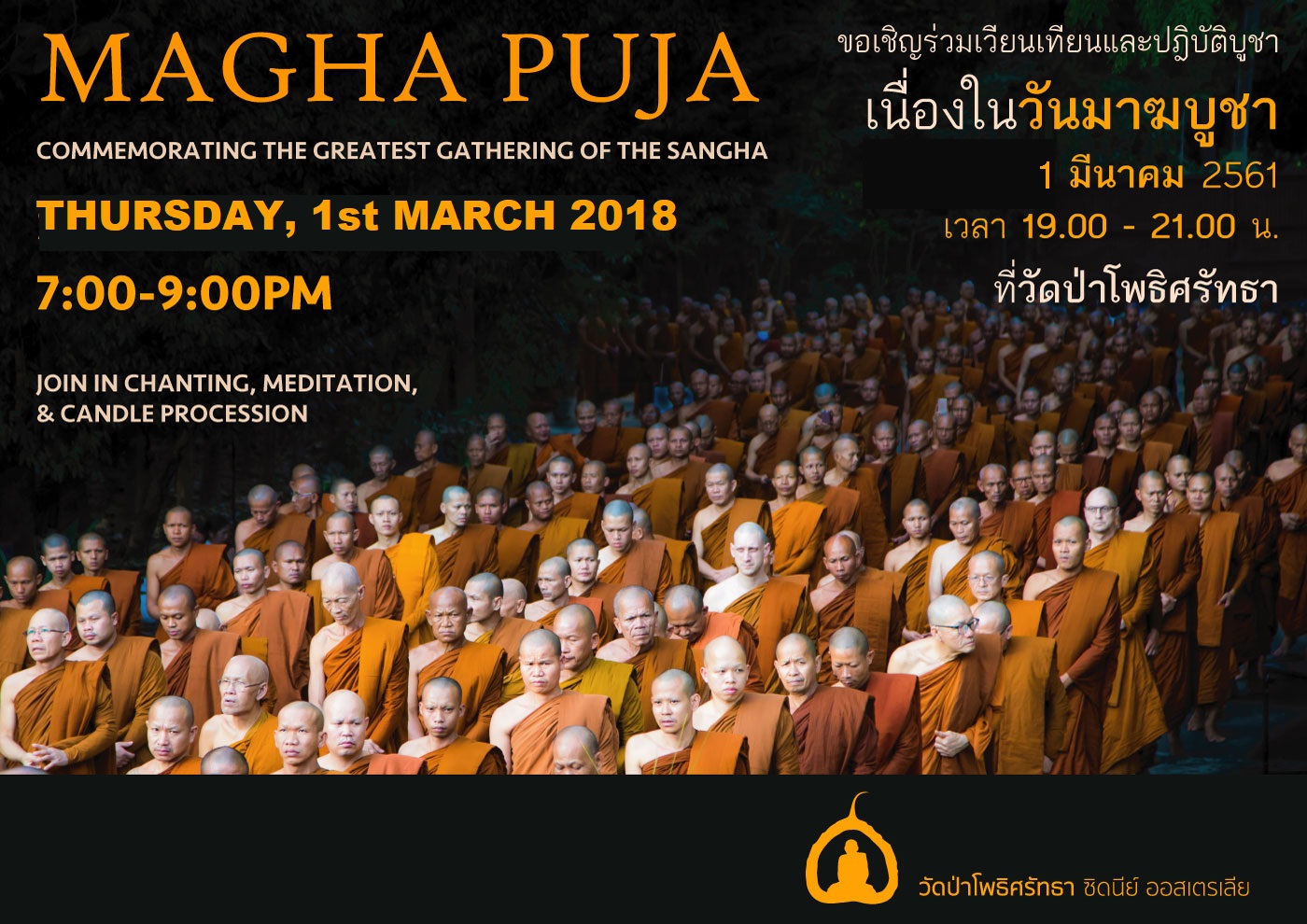 Makha Bucha Day marks an event occurring at the Veḷuvana grove, near Rājagaha (present Rajgir) in northern India, ten months after the enlightenment of the Buddha. On that occasion, as recorded in the commentary to the Mahāsamayasutta (DN 20), four “marvelous events” occurred:

On this occasion, the Buddha gave those arahants the principles of Buddhism, called the Ovādapatimokha. Those principles are: To refrain from all evil; to do what is good; to cleanse one’s mind. In Thailand, this teaching has been dubbed the “heart of Buddhism”.

In the morning of Makha Bucha Day, many Thai people wake up early to give alms to monks. In the evening, temples are full of people listening to sermons. Most temples hold a candlelight procession called a wian thian (wian meaning to circle around; thian meaning candle). Holding flowers, incense and a lighted candle, the monks and congregation members circumambulate clockwise for three times, around the phra ubosot (ordination hall), once for each of the Three Jewels: the Buddha, the teaching of the Buddha, and the monastic community. Furthermore, people will ‘make merit’ (tham bun) by going to temples and join in with activities such observing the Five or Eight Precepts (rap sin), practice of meditation and mental discipline, staying in the temple, and wearing white robes. This is usually done for a number of days.

Despite the great age of the events of Makha Bucha (Buddha was teaching over 2,500 years ago), this day only became a holiday in Thailand in 1957. Prior to 1957, the third lunar month full moon was celebrated as a Buddhist Holy Day.

In Thailand, the sale of alcohol is banned on religious holidays. This means bars and clubs are closed for the entire holiday. If Makha Bucha falls on a weekend, a substitute holiday will be observed on the following Monday. Similar restrictions on the sale of alcohol will also apply on this day.

As mentioned above, many Buddhists observe the Five Precepts:

Those wanting to make special merit, add the following three to make the Eight Precepts:

Buddhists are reminded to meditate on Makha Bucha Day, as well. As even the Thai government points out, the focus of Makha Bucha Day is “the veneration of Buddha and his teachings on the full moon day of the third lunar month.”

There are a number of Buddhist holy days on the calendar each year with Makha Bucha Day considered to be the second most important. One or two of the holidays may be honored each year with a stamp release; A Stamp A Day has profiled several of these including Asanha (or, Asalha) Bucha Day in 2016 and 2017, Vassa Day (or, Wan Khao Phansa, which is always the day after Asanha Bucha) in 2016 and the most important of all Buddhist holidays, Vesak Bucha Day, in 2017. Scott #1523 was issued by the Communication Authority of Thailand (CAT) on March 7, 1993, a 3-baht lithographed stamp, perforated 14½, which portrays the gathering of the Arahants at the Veluvana grove.