It’s Friday night at the end of a very long week (with six to eight hours of work tomorrow as well) and, quite frankly, I am exhausted. I started off the week with two days at one of Phuket’s largest schools (it’s still overcrowded despite the construction of a brand-new 7-floor building year) in order to test individual students in kindergarten classes. It’s the end of the school year and their regular teachers had left for their holidays a bit too early (often the schools will inform the agency the term-ending dates resulting in chaos). I had to go and individually test 45+ kids in each 60-minute-long class (too many kids and too long of periods for kindergarten!). I had another teacher give a lesson and activity while each child would come to me individually for about one-minute of testing and giving scores in the categories of speaking, listening, comprehension,  participation, and behavior. Exhausting and hot work (there is no air-conditioning in most Thai government schools).

On Wednesday, I began teaching a 60-hour course to a 4-year-old Thai girl. Classes are at the agency where I work, two hours per day Monday through Saturday. The parents want me to teach their daughter Phonics for the first hour each day followed by an hour of Conversation and/or Math. Did I mention the girl is four years old? Despite the kindergarten testing and occasional English camps, the majority of my students the past few years have been adults. I specialize in Business English and I try to avoid children unless in a school classroom (where I prefer secondary levels to primary). Young kids are exhausting (and such an everyday course as I’m doing requires a fair amount of preparation each evening). In addition to teaching this student on Thursday, I also had to conduct a four-hour English camp (fun and games) at a school on the other side of the island in a Buddhist temple. This morning, I started the day off with a routine 90-day check-in at the local Thai Immigration Office (something everyone here must do every three months even if they have a one-year visa and work permit, as I do). 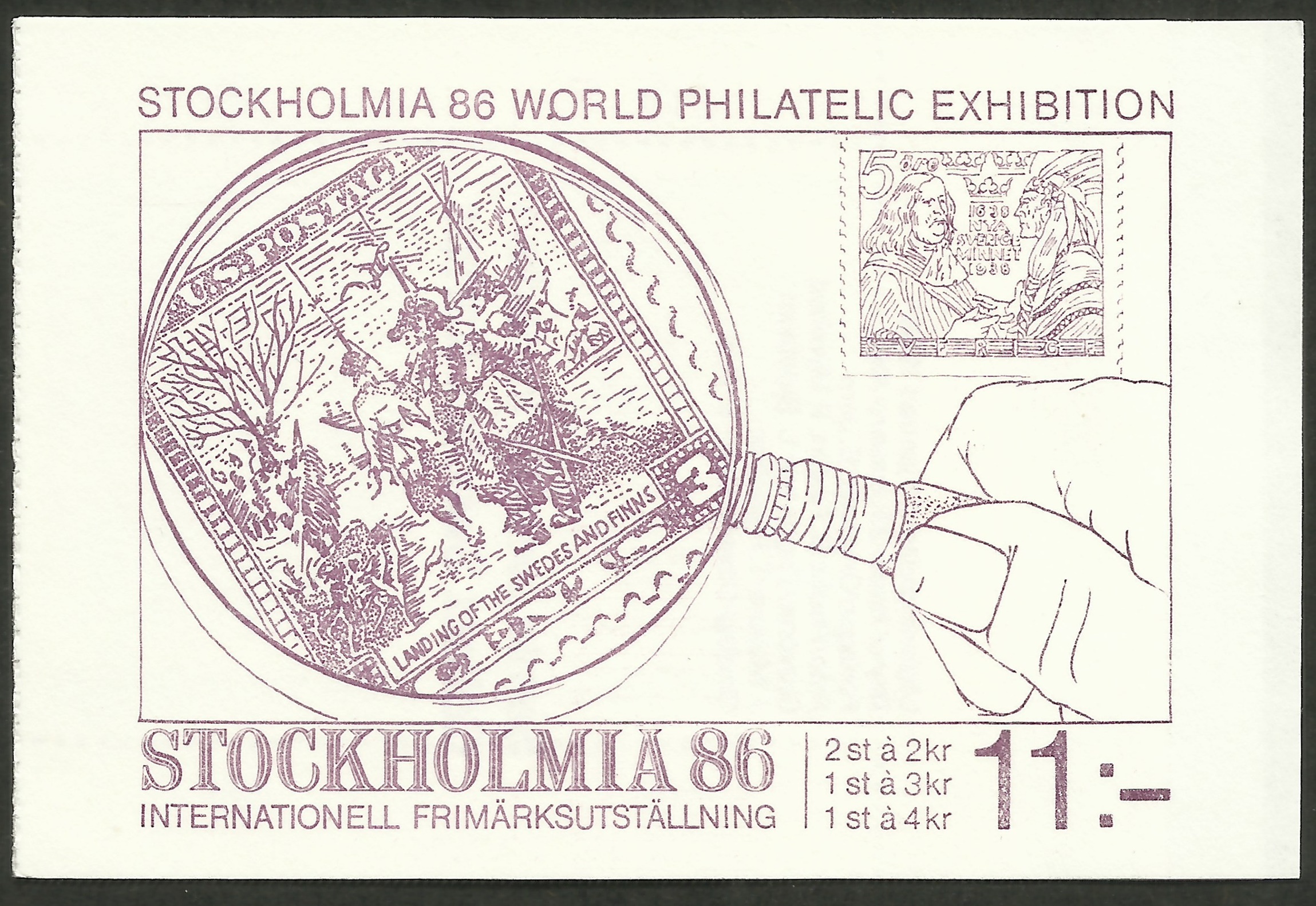 Yes, I am exhausted. So, I picked today’s stamp as I wouldn’t have to research or write much on the subject matter portrayed on it. I love stamps that picture some aspect of our hobby of philately; I find them much more interesting than those that are merely stamps on stamps (although those can be quite nice, too!). Sweden #1588 is actually one of my favorites in this category (“philately on stamps?”) even though the process of soaking stamps has always been my second least favorite part of the entire hobby. This was part of a booklet pane of four stamps promoting the hobby as well as the STOCKHOMIA 86 stamp exhibition (Scott #1588a). It was a joint issue with the United States; the U.S. counterpart is Scott #2201a which also promoted the AMERIPEX 86 stamp show. Both were released on January 23, 1986, with the American first day of issue city at State College, Pennsylvania, headquarters of the American Philatelic Society.

The stamps in the Swedish booklet picture an early Swedish stamp (Scott #33a issued in 1879) with a bull’s-eye cancel on one of two 2-krona values (Scott #1585), stamp engraver Sven Ewert preparing a stamp die on the second 2-krona stamp (Scott #1586), a page from a stamp album bearing two Swedish stamps (Scott #268 and #271) and a magnifying glass enlarging a United States 3-¢ent Landing of the Swedes and Finns stamp (Scott #836) on a stamp denominated at 3 krona (Scott #1587), in addition to a boy using tongs to retrieve stamps for his collection from a bowl of water (Scott #1588) on the 4-krona value. All four stamps were printed by lithography and engraving, perforated 11.

The United States version of this issue had the stamps issued in two panes of four 22-cent stamps. In an ingenious marketing tie-in, the cover of this booklet served as a free admission ticket to AMERIPEX. The four stamps feature a hand stamped cover (Scott #2198), a boy examining a stamp collection (Scott #2199), a magnifying glass examining U.S. Scott #836 (Scott #2200), and the 1986 Presidents miniature sheet first day cover (Scott #2201). The stamps were designed by Richard Sheaff, except the magnifying glass stamp, which was designed by Eva Jern. The stamps were lithographed and engraved by Sterling Sommers for Ashton-Potter (USA) Ltd., perforated 10 vertically.

I like Scott #1588 so much that I used it as the basis for a couple of “stamp edits” last year. I am still thinking of creating more of these “edits” in order to use them as teaching tools. Perhaps they might make good flashcards for teaching Phonics. It’s worth a try at least as I have yet to use stamps in teaching English As A Second Language.

One thought on “Soaking Stamps (or, ASAD Laziness)”