In the 19th century, the population of the Channel Island of Jersey increased rapidly and the main town of St. Helier expanded with many new streets in the middle portion of the century. Two railways, the Jersey Western Railway in 1870, and the Jersey Eastern Railway in 1874, were opened. The western railway operated from St Helier (Weighbridge) to La Corbière and the eastern railway from St Helier (Snow Hill) to Gorey Pier. The two railways were connected. Buses started running on the island in the 1920s, and the railways could not cope with the competition. The eastern railway closed in 1929 and the western railway in 1936 after a fire disaster that year.

The Jersey Eastern Railway began operations on August 6, 1873. The line began at Saint Helier, with intermediate stations located at Georgetown, Samarès, Le Hocq, Pontac, La Rocque and Fauvic, with the eastern terminus in Grouville, originally opposite the Wimbledon Hotel, later extended to Gorey and then to Gorey Pier. The total length was 6.75 miles, running on standard gauge. (4ft 8½ inches) track. The railway closed on June 21, 1929. 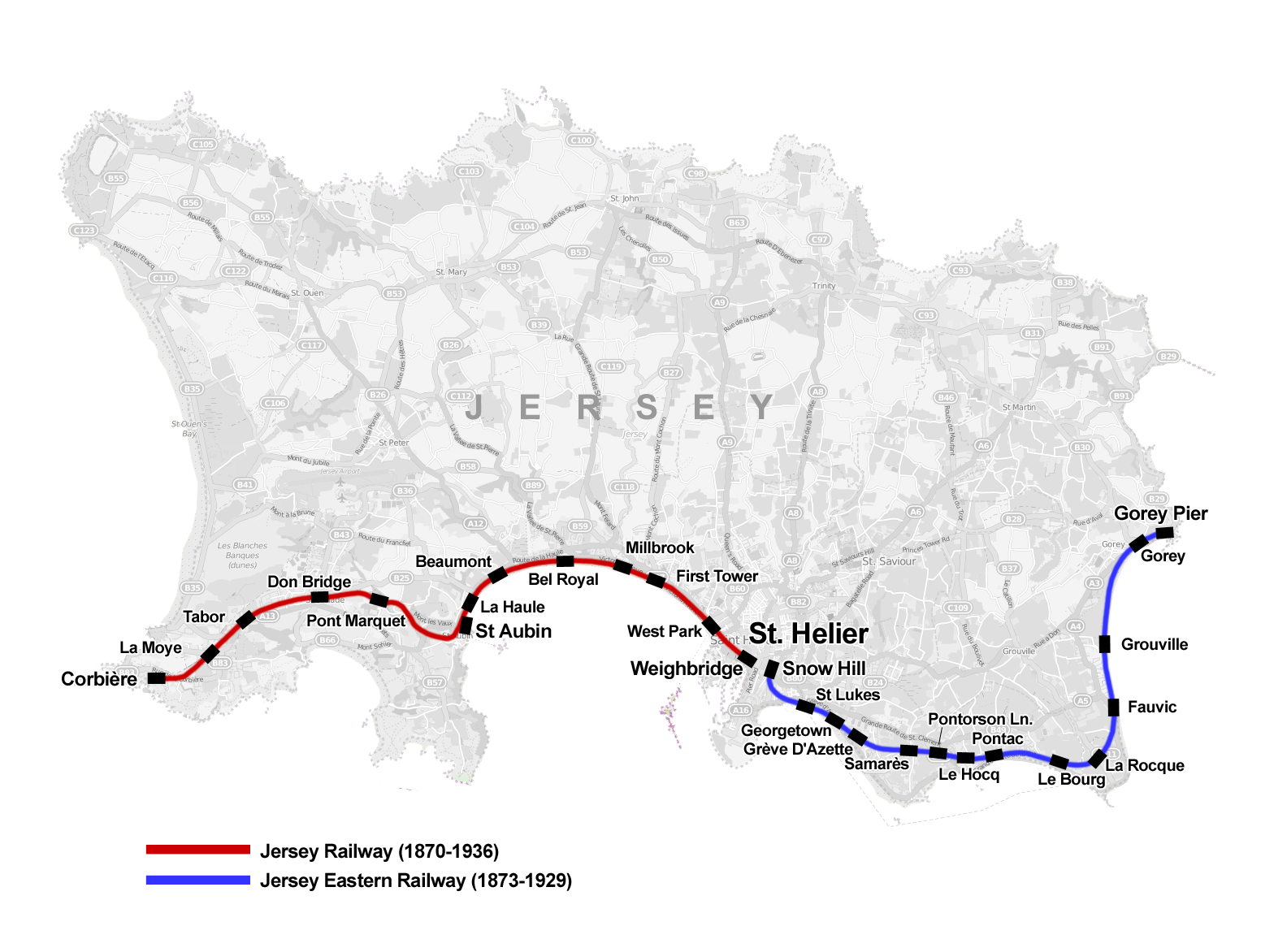 The matter of a railway for the eastern residents of the island came before the States of Jersey on March 15, 1871. On May 15, the committee appointed by the States met to consider objections by landowners; the majority were satisfied that they had received fair compensation. The Loi pour l’établissement d’un Chemin de Fer entre la Ville de St.-Hélier et Gorey was confirmed by Order in Council on March 19, 1872, with 68 articles of the projet in the name of the Jersey Eastern Railway Company Limited. The law (repealed by the Statute Law Revision (No. 3) (Jersey) Law, 1966) authorized the railway from Snow Hill in St Helier, to Gorey and from there to St Catherine’s Bay in St Martin, although the latter route was never begun. There was no mention of gauge. Article 54 of the projet was most significant in stating that any disagreement with property owners must be resolved by the Royal Court for consideration and decision, and the claimant could not cause work to cease by raising the clameur de haro (as had happened with the Jersey Railway construction).

Construction work commenced on May 1, 1872. The first turf was dug by Mrs. Edward Mourant, wife of the chairman of the Board of Directors, at a private ceremony on September 17, 1872. Despite some labor disputes, work pressed ahead and on April 27, 1873, two locomotives and several carriages were delivered to the island. The line was opened on August 6, 1873, with a train of six carriages taking the States Members and their wives along the track from a temporary terminus at Green Street to what became known as Grouville Station in 15 minutes. At the time, this was called Wimbledon after a nearby public house and was the eastern terminus until Gorey Station opened on August 27. Following the construction of a new sea wall, the line was extended to Gorey Pier on May 25, 1891, coinciding with Queen Victoria’s birthday. The journey of just over six miles from St. Helier cost 9d (old pence) first class return, 6d second class return.

The St. Helier terminus was located in a deep cutting at Snow Hill which opened on May 6, 1874. Intermediate stations were located at St. Luke’s (Beach Road), Grève d’Azette, Samares, a halt for the railcars in 1927 at Pontorson Lane, Le Hocq, Pontac, Le Borg (opened in March 1925), Le Rocque, Les Marais (later renamed Fauvic to avoid confusion with Samares), Grouville, and Gorey Village. There were a total of 14 road crossings protected with level crossing gates, most of which were controlled by adjacent stations or a crossing keeper. Some had lifting barriers, raised and lowered by a windless some distance from the crossing itself. Despite these precautions, with the increase in vehicular traffic in the 1920s there were five motorcar accidents involving level crossing gates and trains. Two of these were fatal.

There were five locomotives used by the Jersey Eastern Railway, all tank engines of 0-4-2 wheel configuration:

Messrs. Kitson & Co. of Leeds built all four of the following 0-4-2T engines:

In 1923, the Jersey Motor Transport Company started a bus service carrying passengers all over the Island. The Jersey Eastern Railway tried to counter the fierce competition by running their own bus service in 1926, but this was not much of a success. An effort was made to counter the financial difficulties and two Sentinel railcars — the Normandy and Brittany — were purchased in 1927. Declining profits led to termination of both the bus and train services with the last train (a railcar) running on June 21, 1929. The company itself was liquidated in 1932.

All of the rolling stock and locomotives were scrapped and the trackbed sold off in portions, mainly for the construction of houses. Of the railcars, Normandy was sold to the Jersey Railway while the locomotive portion of Brittany went to a brickworks at Redhill, Surrey. For many years, the carriage portion served as a bungalow at Grève d’Azette before subsequently being acquired for preservation and moving to several locations until finally finding a permanent home at the Pallot Steam Museum in Trinity, Jersey.

During the Second World War, the German occupying forces constructed several railway lines primarily in the western portions of Jersey. These were primarily used for transporting granite used in the production of concrete for their fortifications. Constructed at a meter gauge (slightly over 3 feet, 3 inches), the German railway was officially opened by the Military Commander of Jersey, Major-General Graf von Schmettow, on July 15, 1942. A 60-centimeter gauge line was also built in the east with a bridge over the English Harbour, a tunnel beneath Mount Bingham and a portion mostly along the roadway at Havre-des-Pas before picking up the old Jersey Eastern Railway trackbed from Green Road which it followed all the way to Grouville Common. All of the German railway works were removed following the Liberation of the Channel Islands in May 1945.

Most of the land of the Jersey Eastern Railway was sold to adjacent landowners, but part of the route can be seen near Fauvic (at the southeastern tip of the island), where it has been preserved as a footpath. It is possible to trace much of the route as it threads its way through the fields and hedgerows on the way to Gorey. Several of the station buildings survive as private residences. The Jersey Eastern Railway Terminus Hotel at Snow Hill remains, and is on the Register of Historic Buildings.

The island of Jersey is quite proud of its railway heritage and the post office has issued stamps commemorating this legacy on several occasions. Scott #86 was released on August 6, 1973, part of a set of four stamps marking the 100th anniversary of the inauguration of the Jersey Eastern Railway (Scott #85-88). Each stamp portrays a different locomotive and all were designed by Gordon Drummond. They were printed by Courvoisier using the photogravure process on unwatermarked paper, perforated 11½. The 2½-pence stamp features North Western 2-4-0T. The Calvados is seen on the 3-pence value while the 7½ pence pictures the Carteret and Caesarea is on the 9 pence denomination, along with a route map. The 7½ pence sold out on October 31, 1973, and the remaining stamps were withdrawn from sale on August 5, 1974. The first day of issue postmark for these stamps included a locomotive; a presentation pack was also sold for this issue.

Additional Jersey railroad stamps can be found on this page. The islandwiki for Jersey features quite a few photos of both of the island’s railroads. A history of Jersey is recounted on the issuer profile published on ASAD one year ago today.