Agadir (ⴰⴳⴰⴷⵉⵔ in Berber or أغادير in Arabic) is a city in mid-southern Morocco located on the shore of the Atlantic Ocean near the foot of the Atlas Mountains, just north of the point where the Sus River flows into the ocean. It is 508 kilometers south of Casablanca and is the capital of the Agadir Ida-U-Tanan Prefecture and of the Sus-Massa economic region. The municipality of Agadir recorded a population of 421,844 in the 2014 Moroccan census. Three languages are spoken in the city — Tashelhit (first language of the majority), Moroccan Arabic, and French.

The city was destroyed by an earthquake in 1960; it has been completely rebuilt with mandatory seismic standards. It is now the largest seaside resort in Morocco, where foreign tourists and many residents are attracted by an unusually mild year-round climate. Since 2010, it has been well served by low-cost flights and a motorway from Tangier. The city attracts all walks of life; it has had an annual growth rate of over 6% per year in housing demand while housing production barely exceeds 3.4% 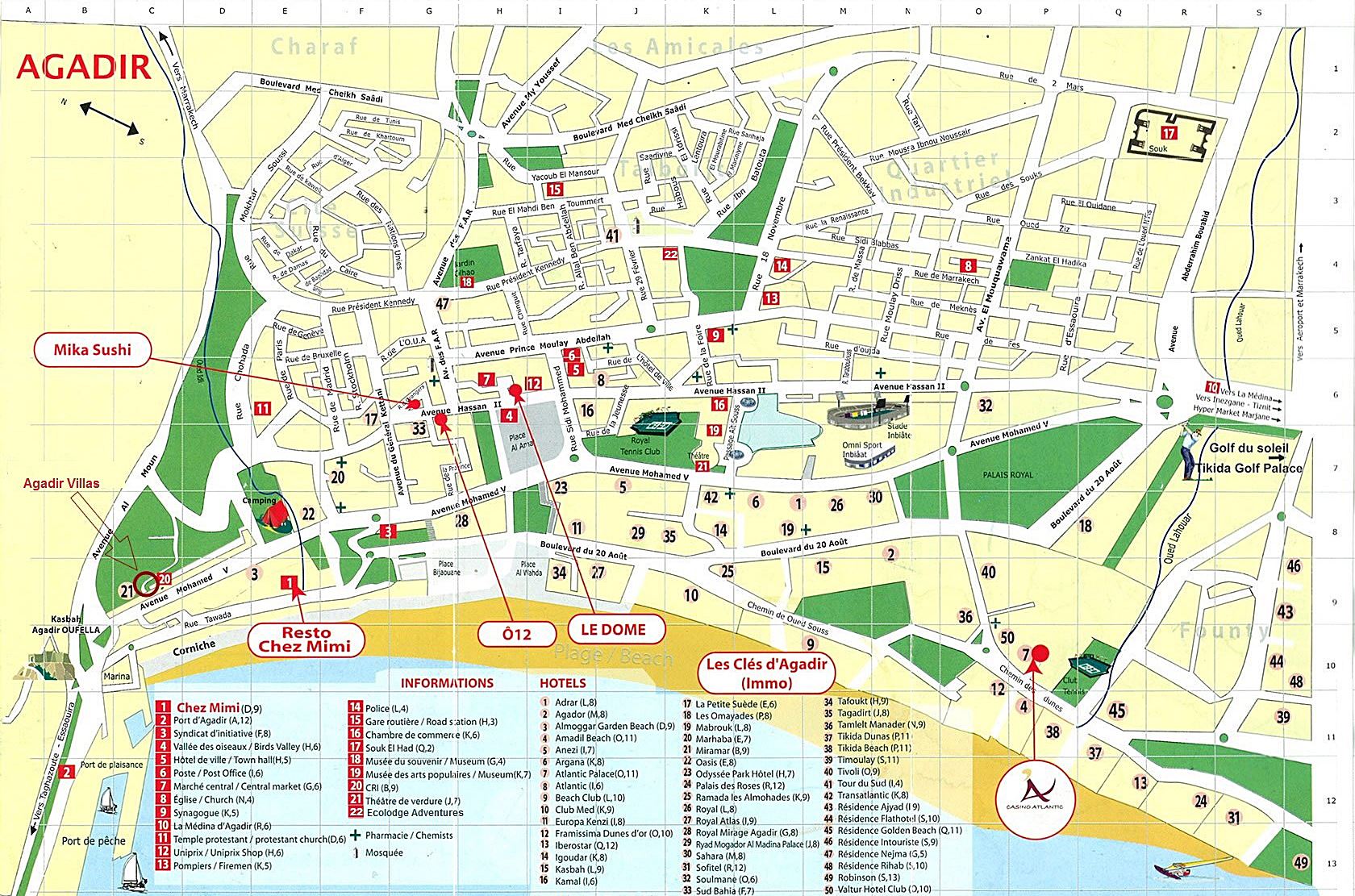 The name Agadir is a common Berber noun meaning “wall, enclosure, fortified building, citadel”. This noun is attested in most Berber languages, and may be a loanword from Phoenician-Punic, a Semitic language spoken in North-Africa until the fifth century CE. There are many more towns in Morocco called Agadir. The city of Agadir’s full name in Tashelhit is Agadir n Yighir, literally “the fortress of the cape”, referring to the nearby promontory named Cape Rhir on maps (a pleonastic name, literally “Cape Cape”). A single male inhabitant or native of the town is known in Tashelhit as a gg ugadir (also a common surname, “Gougadir” in French spelling), plural ayt ugadir “men of Agadir” (also collective name, “men and women of Agadir, people of Agadir”); a single feminine inhabitant is a ult ugadir “woman of Agadir”, plural ist ugadir “women of Agadir”. In Moroccan Arabic, an inhabitant is a agadiri, plural agadiriyin, feminine agadiriyat, plural agadiriya.

Little history is recorded for Agadir before the 12th century. In the 2nd century AD, the historian Polybius referred to North Africa on the Atlantic, a place called cap Rhysaddir, that may have been located near Agadir but its location is still under debate. The oldest cartographic mention of Agadir is on a map from 1325: at the approximate location of the modern city there was an indication of a place called Porto Mesegina, after the name of a Berber tribe already mentioned in the 12th century, the Mesguina, that is to say the Ksima.

At the end of the medieval period, Agadir was a town of some notoriety. The name itself, Agadir al-harba, was attested to for the first time in 1510. In 1505, the Portuguese, who were already installed on the Moroccan coast, founded a trading post and a fort at the foot of the hill to the sea, Santa Cruz do Cabo de Aguer on the site of the now-vanished neighborhood of Founti (named after the Portuguese word fonte meaning fountain) under a governor.

Quickly, the Portuguese were exposed to the hostility of the tribes of the region. From 1530, they were blockaded in Santa Cruz. Portuguese weakness showed itself on March 12, 1541, when Sherif Saâdien Mohammed ash-Sheikh captured the fortress of Santa Cruz de Aguer. Six hundred Portuguese survivors were taken prisoner, including the governor, Guterre de Monroy, and his daughter, Dona Mecia. The captives were redeemed by the holy men mostly from Portugal. Dona Mecia, whose husband was killed during the battle, became the wife of Sheikh Mohammed ash-Sheikh but died in childbirth in 1544. In the same year, Mohammed ash-Sheikh released the Governor Guterre de Monroy, whom he had befriended.

The Portuguese possessions in Morocco, acquired between 1505 and 1520, were regressing. After the loss of Agadir, the Portuguese were obliged to abandon Safi and Azemmour. Morocco was beginning to be less important for Portugal which now turned to India and Brazil. After 1550, the Portuguese no longer held anything in Morocco other than Mazagan (now El Jadida), Tangier and Ceuta.

In 1572, the Casbah was built on top of the hill by Moulay Abdallah al-Ghalib, successor to Mohammed ash-Sheikh. It was now called Agadir N’Ighir, literally: fortified granary of the hill in Tachelhit.

In the 17th century, during the reign of the Berber dynasty of Tazerwalt, Agadir was a harbor of some importance, expanding its trade with Europe. There was, however, no real port nor a wharf. Agadir traded mainly in sugar, wax, copper, hides and skins.[9] Europeans took their manufactured goods, particularly weapons and textiles. Under the reign of Sultan Moulay Ismail (1645–1727) and his successors, the trade with France, until then an active partner regressed to the English and the Dutch.

In 1731, the town was completely destroyed by an earthquake. The harbor of Agadir was then ordered to be closed when Essaouira was established farther north.

In 1746, the Dutch set up a trading post at the foot of the Casbah under the authority of the Sultan, and undoubtedly participated in the restoration of the city. Above the door of the Casbah, the Dutch inscription can still be seen with its transcription in Arabic: “Vreest God ende eert den Kooning“, which means “Fear God and honour the King”, and the date 1746.

After a long period of prosperity during the reigns of the Saadian and Alawite dynasties, Agadir declined from 1760 because of the pre-eminence given to the competing port of Essaouira by the Alawite Sultan Mohammed ben Abdallah who wanted to punish the Souss for rebelling against his authority. This decline lasted a century and a half. In 1789, a European traveler gave a brief description of Agadir: “It is now a ghost town, there are no more than a few houses and these are crumbling into ruins”.

In 1881, Sultan Moulay Hassan reopened the harbor to trade in order to supply the expeditions he planned in the south. These expeditions, which were to reassert his authority over the Souss tribes and counter the plans of English and Spanish, were held in 1882 and 1886.[

In 1884, Charles de Foucauld described in Reconnaissance au Maroc (Reconnaissance in Morocco) his rapid passage to Agadir from the east:

I walk along the shore to Agadir Irir. The road passes below the city, half-way between it and Founti: Founti is a miserable hamlet, a few fishermen’s huts; Agadir, despite its white enclosure which gives it the air of a city is, I am told, a poor village depopulated and without trade.

On the pretext of a call for help from German companies in the valley of the Souss, Germany decided on July 1, 1911, to extend its interests in Morocco and assert a claim on the country. It sent the SMS Panther to the Bay of Agadir which was quickly joined by the cruiser Berlin. Very strong international reaction, particularly from Great Britain, surprised Germany and triggered the Agadir Crisis between France and Germany. War threatened. After tough negotiations, a Franco-German treaty was finally signed on November 4, 1911, giving a free hand to France, who would be able to establish its protectorate over Morocco in return for giving up some colonies in Africa. It was only then that the gunboat Panther and the cruiser Berlin left the bay of Agadir.

Due to a miscalculation, the German sales representative Hermann Wilberg, who was sent to provide the pretext for the intervention, only arrived at Agadir three days after the Panther arrived.

In 1913, the cities (Agadir N’Ighir and Founti) totaled less than a thousand inhabitants. On June 15, 1913, French troops landed in Agadir. In 1916, the first pier was built near Founti — a simple jetty, later known as the “Portuguese jetty”, which remained until the end of the 20th century. After 1920, under the French protectorate, a port was built and the city saw its first development with the construction of the old Talborjt district located on the plateau at the foot of the hill. Two years later, beside Talborjt along the faultline of the river Tildi construction of the popular district of Yahchech began.

Around 1930, Agadir was an important stop for the French airmail service Aéropostale and was frequented by Saint-Exupéry and Mermoz.

In the years from 1930, a modern central city began to be built according to the plans of the urban planner Henri Prost, director of the Urban Planning Department of the Protectorate, and his deputy Albert Laprade: a horseshoe layout based on the waterfront[13] around a large avenue perpendicular to the waterfront — the Avenue Lyautey, since renamed Avenue du Général Kettani. In the 1950s, urban development continued under the direction of the Director of Urban Planning Morocco, Michel Ecochard.

After 1950 and the opening of the new commercial port, the city grew with fishing, canning, agriculture, and mining. It also began to open up to tourism thanks to its climate and beautiful hotels. Several years later from 1950 to 1956 Agadir organized the Grand Prix of Agadir and, from 1954 to 1956, the Moroccan Grand Prix.

In 1959, the port was visited by the yacht of the Greek shipping magnate Aristotle Onassis and his guest, Winston Churchill.

Agadir numbered over 40,000 residents when at 15 minutes to midnight on February 29, 1960, it was again almost totally destroyed by an earthquake of magnitude 5.7 on the Richter scale that lasted 15 seconds, burying the city and killing more than a third of the population. The death toll was estimated at 15,000. The earthquake destroyed the ancient Casbah. On seeing the destruction in Agadir, King Muhammad V of Morocco declared: “If Destiny decided the destruction of Agadir, its rebuilding depends on our Faith and Will.”

The current city was rebuilt 2 kilometers further south, led by the architects Jean-François Zevaco, Elijah Azagury, Pierre Coldefy, and Claude Verdugo. Agadir became a large city of over half a million by 2004, with a large port with four basins: the commercial port with draft of 17 meters, triangle fishing, fishing port, and a pleasure boat port with marina. Agadir was the premier sardine port in the world in the 1980s and has a famous beach stretching over 10 km with one of the finest seafront promenades in the world. Its climate has 340 days of sunshine per year which allows for swimming all year round. The winter is unusually warm and summer heat is never oppressive (summer haze however is common).

With Marrakech, Agadir is a very important center for tourism to Morocco, and the city is the most important fishing port in the country. Business is also booming with the export of citrus fruit and vegetables produced in the fertile valley of Souss. With its white buildings, wide flowered boulevards, modern hotels and European style cafes, Agadir is not a typical city of traditional Morocco but it is a modern, active and dynamic city, turned towards the future.