On March 28, 1566, the foundation stone of Valletta, Malta’s capital city, is laid by Jean Parisot de Valette, Grand Master of the Sovereign Military Order of Malta. Geographically, it is located in the South Eastern Region, in the central-eastern portion of the main island of Malta having its western coast with access to the Marsamxett Harbour and its eastern coast in the Grand Harbour. The historical city has a population of 6,444 (as of March 2014), while the metropolitan area around it has a population of 393,938. Valletta is the southernmost capital of Europe and the second southernmost capital of the European Union after Nicosia.

Valetta is located on the Sciberras Peninsula, as is the suburb Floriana. The peninsula is a strip of land between the Grand Harbour in the south and Marsamxett Harbour in the north. It is called a peninsula, despite the absence of an isthmus, and at the end of this feature stands the Mount Sciberras, which gave its name to the peninsula. During the Arab occupation the peninsula was called Mu’awiya, which has been taken up in Maltese as Xagħriet Mewwija (uncultivated and undulating heaths). The Valletta peninsula has two natural harbours, Marsamxett and the Grand Harbour. The Grand Harbour is Malta’s major port, with unloading quays at nearby Marsa. A cruise-liner terminal is located along the old seawall of the Valletta Waterfront that Portuguese Grandmaster Manuel Pinto da Fonseca built.

Valletta contains buildings from the 16th century onwards, built during the rule of the Order of St. John also known as Knights Hospitaller. The city is essentially Baroque in character, with elements of Mannerist, Neo-Classical and Modern architecture in selected areas, though the Second World War left major scars on the city, particularly the destruction of the Royal Opera House. The City of Valletta was officially recognised as a World Heritage Site by UNESCO in 1980.

The official name given by the Order of Saint John was Humilissima Civitas Valletta (The Most Humble City of Valletta), or Città Umilissima in Italian. The city’s fortifications, consisting of bastions, curtains and cavaliers, along with the beauty of its Baroque palaces, gardens and churches, led the ruling houses of Europe to give the city its nickname Superbissima (Most Proud).

Please see the previous ASAD entry on Malta for extensive political and postal histories of the Republic of Malta (Repubblika ta’ Malta), 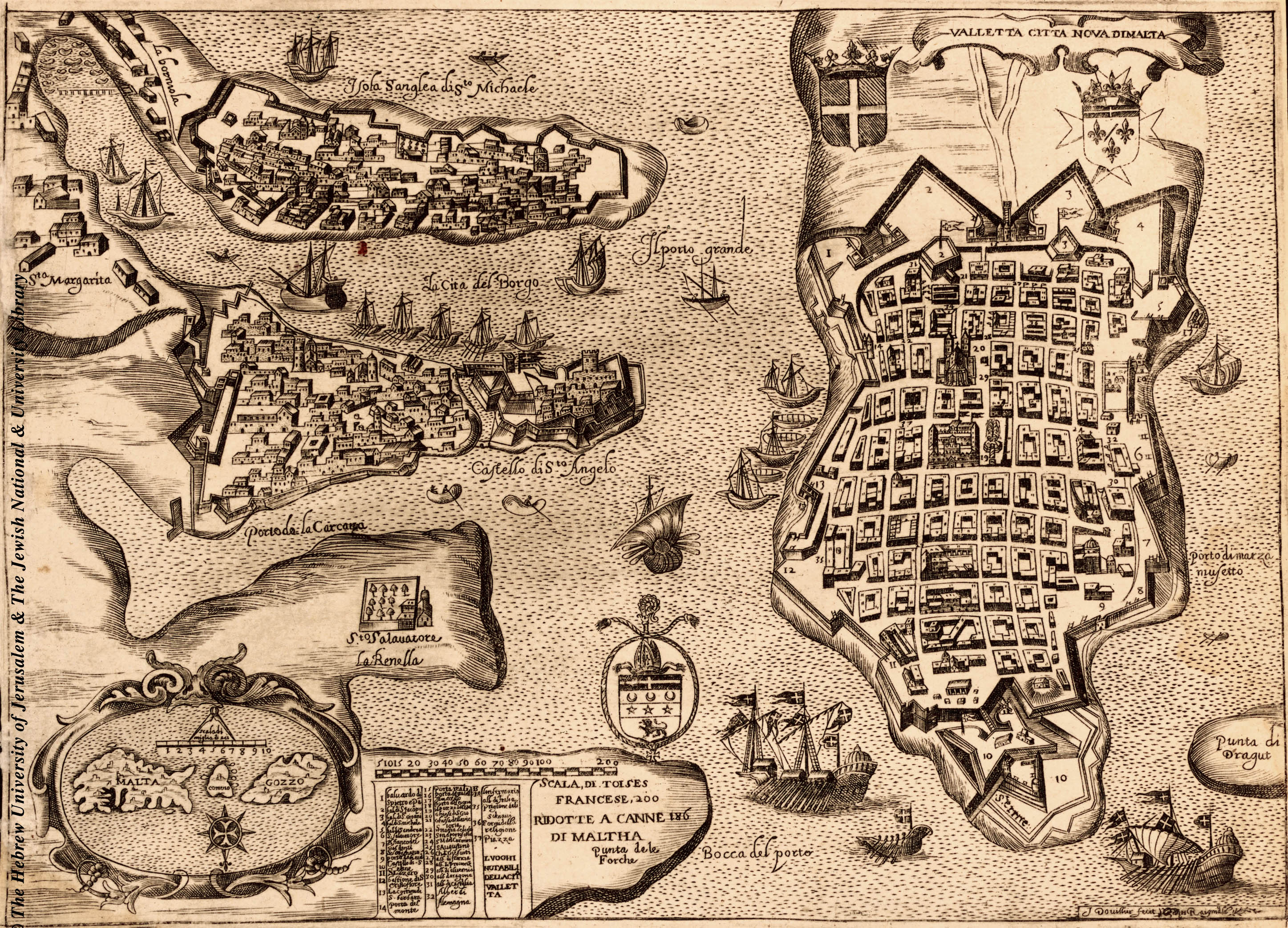 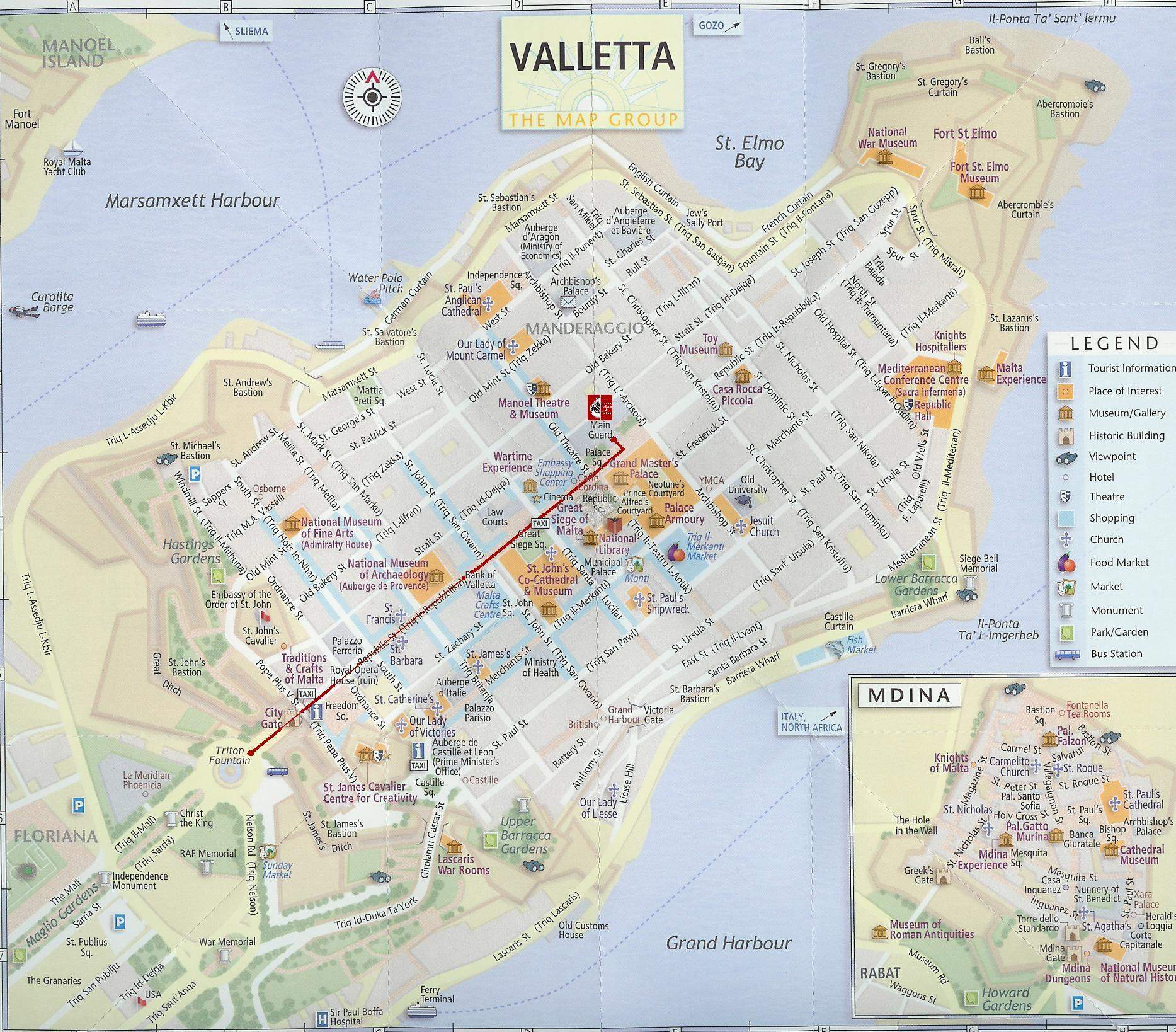 The building of a city on the Sciberras Peninsula had been proposed by the Order of Saint John as early as 1524. Back then, the only building on the peninsula was a small watchtower dedicated to Erasmus of Formia (Saint Elmo), which had been built in 1488. In 1552, the watchtower was demolished and the larger Fort Saint Elmo was built in its place.

In the Great Siege of 1565, Fort Saint Elmo fell to the Ottomans, but the Order eventually won the siege with the help of Sicilian reinforcements. The victorious Grand Master, Jean de Valette, immediately set out to build a new fortified city on the Sciberras Peninsula to fortify the Order’s position in Malta and bind the Knights to the island. The city took his name and was called La Valletta.

The Grand Master asked the European kings and princes for help, and he received a lot of assistance, due to the increased fame of the Order after their victory in the Great Siege. Pope Pius V sent his military architect, Francesco Laparelli, to design the new city, while Philip II of Spain sent substantial monetary aid. The foundation stone of the city was laid by Grand Master de Valette on March 28, 1566. He placed the first stone in what later became Our Lady of Victories Church.

In his book Dell’Istoria della Sacra Religione et Illustrissima Militia di San Giovanni Gierosolimitano (The History of the Sacred Religion and Illustrious Militia of St John of Jerusalem), written between 1594 and 1602, Giacomo Bosio writes that when the cornerstone of Valletta was placed, a group of Maltese elders said: “Iegi zimen en fel wardia col sceber raba iesue uquie” (Which in modern Maltese reads, “Jiġi żmien li fil-Wardija [l-Għolja Sciberras] kull xiber raba’ jiswa uqija“, and in English, “There will come a time when every piece of land on Sciberras Hill will be worth its weight in gold”).

De Valette died from a stroke on August 21, 1568, at age 74 and never saw the completion of his city. Originally interred in the church of Our Lady of the Victories, his remains now rest in St. John’s Co-Cathedral among the tombs of other Grand Masters of the Knights of Malta.

Francesco Laparelli was the city’s principal designer and his plan departed from medieval Maltese architecture, which exhibited irregular winding streets and alleys. He designed the new city on a rectangular grid plan, and without any collacchio (an area restricted for important buildings). The streets were designed to be wide and straight, beginning centrally from the City Gate and ending at Fort Saint Elmo (which was rebuilt) overlooking the Mediterranean; certain bastions were built 154 feet (47 meters) tall. His assistant was the Maltese architect Girolamo Cassar, later oversaw the construction of the city himself after Laparelli’s death in 1570. The Ufficio delle Case regulated the building of the city as a planning authority.

The city of Valletta was mostly complete by the early 1570s, and it became the capital on March 18, 1571, when Grand Master Pierre de Monte moved from his seat at Fort St Angelo in Birgu to the Grandmaster’s Palace in Valletta. Seven Auberges were built for the Order’s Langues, and these were complete by the 1580s. An eighth Auberge, Auberge de Bavière, was later added in the 18th century.

In Antoine de Paule’s reign, it was decided to build more fortifications to protect Valletta, and these were named the Floriana Lines after the architect who designed them, Pietro Paolo Floriani of Macerata. During António Manoel de Vilhena’s reign, a town began to form between the walls of Valletta and the Floriana Lines, and this evolved from a suburb of Valletta to Floriana, a town in its own right.

In 1634, a gunpowder factory explosion killed 22 people in Valletta. In 1749, Muslim slaves plotted to kill Grandmaster Pinto and take over Valletta, but the revolt was suppressed before it even started due to their plans leaking out to the Order. Later on in his reign, Pinto embellished the city with Baroque architecture, and many important buildings such as Auberge de Castille were remodeled or completely rebuilt in the new architectural style.

In 1775, during the reign of Ximenes, an unsuccessful revolt known as the Rising of the Priests occurred in which Fort Saint Elmo and Saint James Cavalier were captured by rebels, but the revolt was eventually suppressed.

In 1798, the Order left the islands and the French occupation of Malta began. After the Maltese rebelled, French troops continued to occupy Valletta and the surrounding harbor area, until they capitulated to the British in September 1800. In the early 19th century, the British Civil Commissioner, Henry Pigot, agreed to demolish the majority of the city’s fortifications. The demolition was again proposed in the 1870s and 1880s, but it was never carried out and the fortifications have survived largely intact.

Eventually, building projects in Valletta resumed under British rule. These projects included widening gates, demolishing and rebuilding structures, widening newer houses over the years, and installing civic projects. The Malta Railway, which linked Valletta to Mdina, was officially opened in 1883. It was closed down in 1931 after buses became a popular means of transport.

In 1939, Valletta was abandoned as the headquarters of the Royal Navy Mediterranean Fleet due to its proximity to Italy and the city became a flashpoint during the subsequent two-year long Siege of Malta. German and Italian air raids throughout the Second World War caused much destruction in Valletta and the rest of the harbor area. The Royal Opera House, constructed at the city entrance in the 19th century, was one of the buildings lost to the raids.

The entire city of Valletta has been a UNESCO World Heritage Site since 1980, along with Megalithic Temples of Malta and the Hypogeum of Ħal-Saflieni. On November 11, 2015, Valletta hosted the Valletta Summit on Migration in which European and African leaders discussed the European migrant crisis. After that, on November 27, 2015, the city also hosted part of the Commonwealth Heads of Government Meeting 2015. Valletta has been selected as the European Capital of Culture for 2018.

The architecture of Valletta’s streets and piazzas ranges from mid-16th century Baroque to Modernism. The city is the island’s principal cultural center and has a unique collection of churches, palaces and museums and act as one of the city’s main visitor attractions. When Benjamin Disraeli, future British Prime Minister, visited the city in 1830, he described it as “a city of palaces built by gentlemen for gentlemen,” and remarked that “Valletta equals in its noble architecture, if it does not excel, any capital in Europe,” and in other letters called it “comparable to Venice and Cádiz” and “full of palaces worthy of Palladio.”

The National Museum of Fine Arts is a Rococo palace dating back to the late 1570s, which served as the official residence of the Commander-in-Chief of the Mediterranean Fleet during the British era from the 1820s onwards. The Manoel Theatre (Teatru Manoel) was constructed in just ten months in 1731, by order of Grand Master António Manoel de Vilhena, and is one of the oldest working theatres in Europe. The Mediterranean Conference Centre was formerly the Sacra Infermeria. Built in 1574, it was one of Europe’s most renowned hospitals during the Renaissance. The fortifications of the port, built by the Knights as a magnificent series of bastions, demi-bastions, cavaliers and curtains, approximately 330 feet (100 meters) high, all contribute to the unique architectural quality of the city.

Scott #1426 is the lowest denomination — 19 euro cents — in a set of three stamps released on March 9, 2011, bearing Maltese landscape paintings by Edward Said. The set also included a 37-cent stamp picturing Manoel Island and a 1.57-euro value with a painting of Cittadella. These were lithographed on watermarked paper, perforated 14×14½. 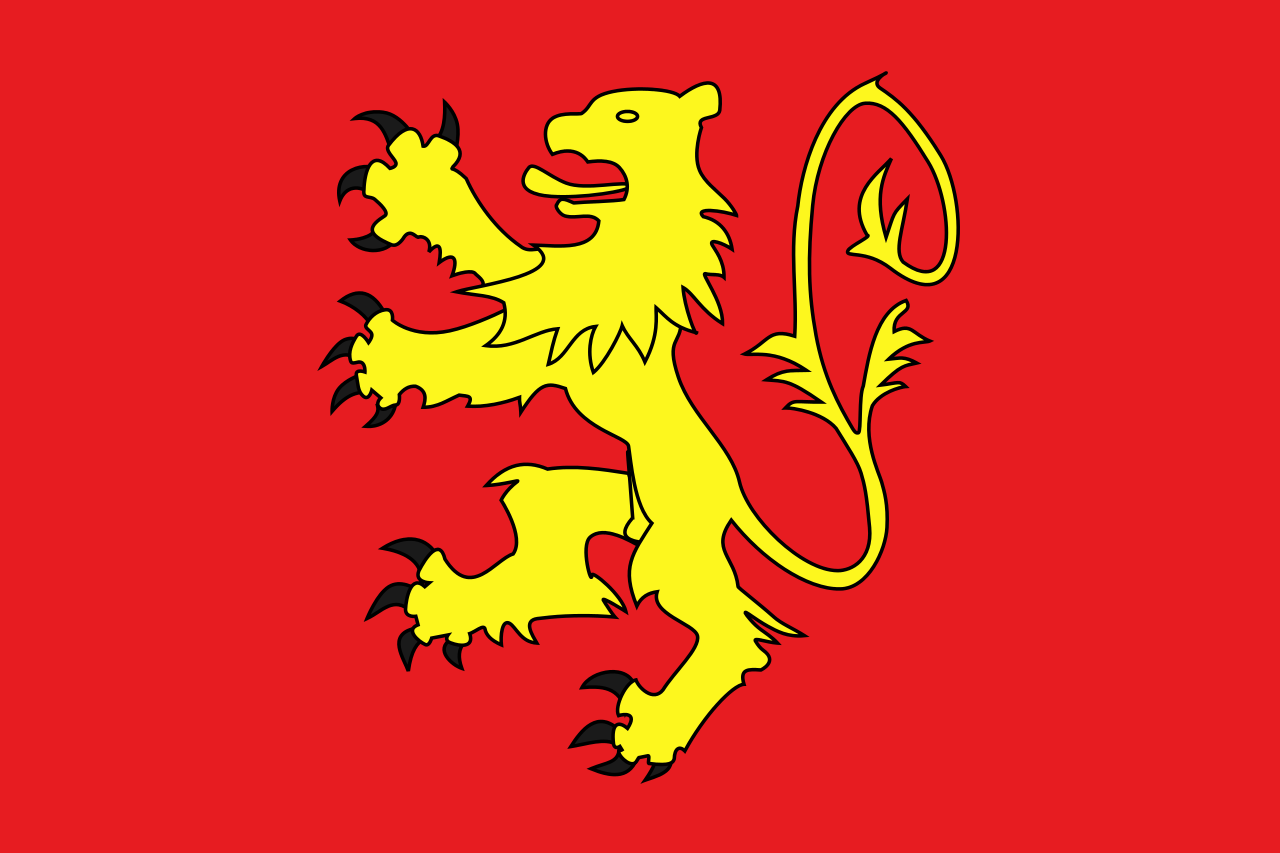