Today is the start of the three-day Songkran Festival (Tesakan Songkran — เทศกาลสงกรานต์,) which is the Thai New Year (2018 is year BE 2561). This means that I actually have a few days off from work as well! In recent years, Songkran has strayed from its iconic rituals of lightly sprinkling water on Buddha statues and the young and elderly, representing purification and the washing away of one’s sins and bad luck, and has degenerated into a nationwide water battle which has become more violent and deadly with each passing year. In an effort to return to the traditional gentleness of the holiday, in 2018 the Thai government has made it illegal for “water-play” to occur outside of certain designated “safe-zones” which will be alcohol-free.

As a festival of unity, people who have moved away usually return home to their loved ones and elders during the Songkran period. Paying reverence to ancestors is also an important part of Songkran tradition. In 1989, the Thai government decided to fix the dates of Songkran as April 12-14, despite the correct starting date (April 13 at 20:57). The cabinet later fixed this issue by shifting these holidays by one day to April 13-15, which are still in use today In some areas — notably Bangkok and Chiang Mai — the celebrations can go on for a week or more.

The word Songkran comes from the Sanskrit word saṃkrānti (संक्रांति in Devanāgarī), literally “astrological passage”, meaning transformation or change. The term was borrowed from Makar Sankranti, the name of a Hindu harvest festival celebrated in India in January to mark the arrival of spring. It coincides with the rising of Aries on the astrological chart and with the New Year of many calendars of South and Southeast Asia, in keeping with the Buddhist/Hindu solar calendar.

The mythical origins behind the celebration of Songkran revolve around the Nang Songkran or the Seven Ladies of Songkran. Kabilla Phrom also known as Brahmā enjoyed betting and met a seven-year-old boy named Thammapala Kumara who was able to recite scriptures in public. Kabilla Phrom wanted to test the child’s knowledge so he descended to earth and presented three riddles to the boy and in return if he knew the answer Kabilla Phrom would offer him his head to the boy. However, if the boy failed to come up with seven answers within seven days he would lose his head to Kabilla Phrom.

The three riddles were, “where did a person’s aura exist in the morning, where was it at noon, and where did it appear at night?”

For six days the boy pondered over the riddles and could still not find an answer. However, the boy who was laying under palm trees heard a male and female eagle joyfully talking about how they would soon be able to feast on a boy’s dead body. The two eagles then revealed the answers to the riddles which the boy overheard and he immediately went to Kabilla Phrom. The boy recited the answers,

“In the morning, a person’s aura appeared on his face, so he washed it. At noon, it was at his chest; so, he wore perfume there. And at night, his aura moved to his feet; that was why he bathed them”,

Kabilla Phrom had lost the bet and so had to cut off his own head. Kabilla Phrom’s head however held special powers, if it should touch the ground, the earth would catch fire; if it should be left in the air, there would be no rain and if it should be dropped into the sea, the sea would dry up. In order to save the world from these possible disasters, the god’s seven daughters or Nang Songkran placed their father’s on a phan and carried it around in procession around Mount Meru before placing it in a cave on Mount Kailash with many offerings. Thus, at the beginning of each year Kabilla Phrom’s daughters would take turns to bring out the god’s head and carry it in procession around Mount Meru, this celebration is known as Songkran.

During the Sukhothai period of Siamese history (1238-1438), the Songkran Festival was practiced both in the royal court palace and among the ordinary citizens. Civil servants and other government officials would pay homage to the king and would drink the oath of allegiance to the the government while the king would provide an annual salary to all officials. Later on in the Ayutthaya period (1350-1767), the festival was expanded by including the bathing of the Buddha image.

Also, the festivities would include the forming of sand pagodas and entertaining celebrations. In the Rattanakosin period (1782-present), the rituals have been conducted in a similar pattern as those during the Ayutthaya period.

Many Songkran traditions originate with the blessings and prayers for Buddhist monks. Ancient Thai tradition warranted visiting the local monasteries and providing gifts of food to the monks who resided there. In addition, prayers and blessings of scented water were poured over the monks during a holy cleansing process. The locals would collect the poured water and bring it back to their loved ones and friends. The local population would then rub and pour the water over one another as they believed the water to be blessed.

Thai people visit monasteries on the morning of Songkran Day, April 13, for prayer and deliver food to the monks. While visiting, locals pour scented water on Buddha symbols. This is followed by a procession of monks carrying Buddha statues through the streets of the festival as people throw water.

The throwing of water is a major part of Songkran. All sorts of containers, hoses, water guns, etc. are used to drench each other with water. The tradition derives from the original collecting and pouring of the blessed water. This is a symbol of good health and fortune in the new year. I have lived here long enough to long for the early days of my stay when many Thais in Phuket (yes, even in Patong) would timidly approach a foreigner (farang) from the front and ask if they could pour a little water over you. This was usually lukewarm scented water which felt really nice under the hot sun. Even those who had the (small) water guns would be careful about it, particularly if they saw you had a camera.

It is also very common to be doused with white chalk to symbolize the monks’ use of making chalk marks to preserve the blessings made. Often, this is mixed with dye to form a colorful paste. Unless you enjoy your favorite outfit soaked while covered in white or colored chalk, recommendations are in effect for casual attire. A raincoat would help as

The Thai government is trying to cut down on disrespectful Songkran behavior this year (2018) by declaring “safe zones”. It remains to be seen if this actually works. I cannot believe the foreign tourists who traditionally use Bangla Road in Patong as their chief party area will react kindly to the alcohol and other prohibitions. The Phuket Provincial Government is also holding “traditional” Songkran festivities at Phuket Historical Park (site of a famous battle against Burmese invaders) at which you must wear traditional Thai fancy dress. The main water park on Phuket has free admission today, the requirement being that attendees must wear Thai clothing (presumably, you will change out of these prior to going on the rides).

Songkran is my favorite of Thai celebrations if it is conducted in a respectful manner. I love the traditional sprinkling of water on Buddha statues and on the wrists of elderly people and enjoy being drenched with water from the front (I like to see it coming so I can prepare a bit) on a hot sunny day. The ice water doesn’t faze me unless the sky is overcast (and we’ve had a few rainy Songkrans in recent years).

I tried travelling twice during Songkran in an effort to escape the water play (once year to Laos which, it turns out, has almost the same type of celebration and once to Cambodia which was very pleasant until my return to Bangkok on April 16 when youths boarded the trains and soaked everybody on board with a firehouse!). Since I love Songkran, I will venture out today in the hopes that the new government campaign against Songkran craziness actually works.

The video above is a collection of clips that I filmed in 2006 and 2007 in Patong. While it may seem a bit out-of-control, it’s still much less so than in recent years. I won’t even risk taking my phone or a camera if I go nowadays.

Scott #541 is a 5-baht photogravure-printed stamp, perforated 13½, that was released on November 23, 1969, as the high value in a set of four stamps highlighting Thai traditions. The other stamps were a 50-satang denomination for Loy Krathong (which fell on November 23 in 1969), the traditional marriage ceremony on the 1-baht stamp, and a 2-baht portraying Raek Na Khwan which is better known as the Royal Ploughing Ceremony. 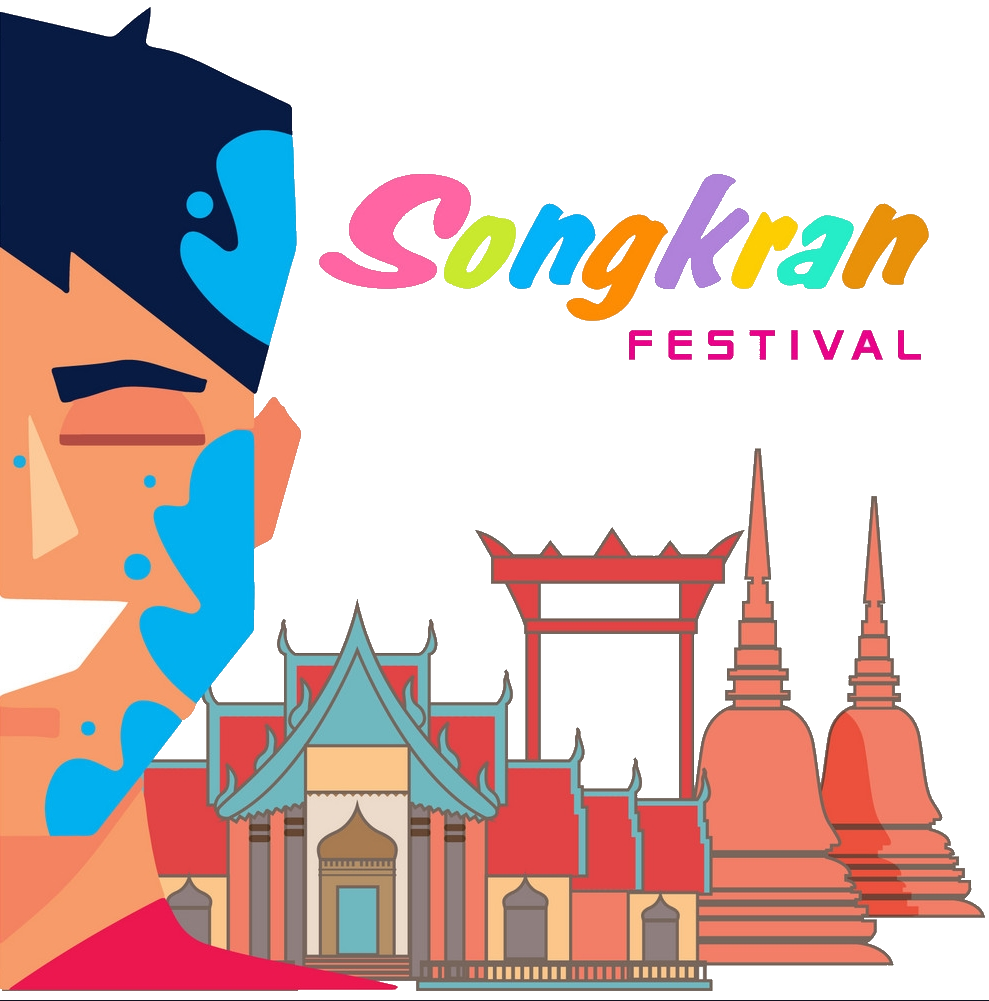 One thought on “Songkran / สงกรานต์”