S.S. Caribou was a Newfoundland Railway passenger ferry that ran between Port aux Basques, in the Dominion of Newfoundland, and North Sydney, Nova Scotia, between 1928 and 1942. During the Battle of the St. Lawrence, the ferry was attacked and sunk by the German submarine U-69 in October 1942, while traversing the Cabot Strait as part of her three weekly SPAB convoys. As a civilian vessel, she had women and children on board, and many of them were among the 137 who died. Her sinking, and large death toll, made it clear that the war had really arrived on Canada’s and Newfoundland’s home front, and is cited by many historians as the most significant sinking in Canadian-controlled waters during the Second World War.

Caribou was built by Goodwin – Hamilton S. Adams Ltd. in the Netherlands for the Newfoundland Railway. Launched on June 9, 1925, at Schiedam, Netherlands, she had a capacity of 3,000 horsepower (2,200 kW) and was able to reach a speed of 14.5 knots (16.78 miles per hour or 26.9 km/h) when fully loaded. She had a tonnage of 2,200 short tons (2,000 t) and was 265 feet (81 meters) long, carrying a crew of 46. She also had steam-heat and electric lights in all of her cabins, which were considered to be a luxury at the time. Also, due to her ice-breaking design, Caribou also assisted during the seal hunt along the Newfoundland coast each spring.

On October 13, 1942, Caribou was part of the Sydney-Port aux Basque (SPAB) convoy, organized by the Royal Canadian Navy base HMCS Protector. The SPAB series of convoys usually occurred three-times a week, and was carried out in darkness. HMCS Grandmère, a Bangor-class minesweeper under the command of  Lt. James Cuthbert was the naval escort vessel on this ill-fated voyage. The convoy departed Sydney at approximately 9:00 p.m. that evening.

The Caribou carried three lifeboats on each side. Two were amidships, the other near the stern of the vessel. Each lifeboat was certified for 50 people. The amidships lifeboats were out of their davits and swung out so that they were ready for immediate launching. The lifeboats at the stern were secured in their davits to prevent them being damaged in heavy seas. As well wartime regulations had resulted in a number of liferafts and floats being installed on the vessel.

The German submarine U-69 under the command of Kapitän-Leutnant Ulrich Gräf was patrolling the Gulf of St. Lawrence. It was a dark evening, and the heavy smoke from Caribou‘s coal-fired steam boilers silhouetted her against the nighttime horizon. Gräf had actually been searching for a three-ship grain convoy heading for Montreal when at 3:21 a.m. he spotted the Caribou “belching heavy smoke” about 20 nautical miles (37 miles or 60 km) off the coast of Newfoundland. He misidentified the 2222-ton Rotterdam-built Caribou and the 670-ton Grandmère as a 6500-ton passenger freighter and a “two-stack destroyer.”

At 3:40 a.m., according to Grandmère’s log, a lone torpedo hit the Caribou on her starboard side. Pandemonium ensued as passengers, thrown from their bunks by the explosion rushed topside to the lifeboat stations. For some reason, several families had been accommodated in separate cabins and now sought each other in the confusion. In addition, several lifeboats and rafts had either been destroyed in the explosion or could not be launched. The two lifeboats on the port side quickly filled and were launched but not without problems. The sea-cocks of both boats were open to prevent the accumulation of rainwater and they started to fill with water. This was discovered and rectified in one of the boats but the other was so crowded that it was impossible to fix before it filled with water and capsized.

The crew who went to launch the stern lifeboats found them filled with people and still in their davits. They were asked and begged to get out so the boats could be swung out but they seemed paralyzed with fear and refused to move. As the vessel started to slide under, some passengers and crew, with or without lifebelts, jumped into the water and attempted to make their way to the life rafts, floats and other debris which was floating in the area. Sadly, many of those in the stern lifeboats were still there when the Caribou lifted her stern and started her dive to the bottom of the Cabot Strait, 1600 feet below. It was only about five minutes since the torpedo struck and it was all over. 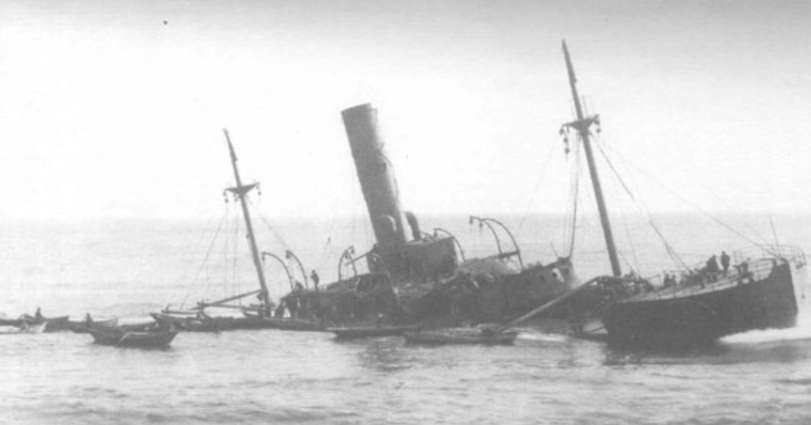 Meanwhile, Grandmère had spotted U-69 in the dark and turned to ram. Gräf, still under the impression he was facing a “destroyer” rather than a minesweeper, crash dived. As Grandmère passed over the swirl left by the submerged submarine, Lt. Cuthbert fired a diamond pattern of six depth charges. Gräf, meanwhile, headed for the sounds of the sinking Caribou, knowing that the survivors left floating on the surface would inhibit Grandmère from launching another attack. However, U-69’s maneuver went unnoticed by Grandmère and Cuthbert dropped another pattern of three charges set for 500 feet. Gräf fired a Bold, an asdic decoy, and slowly crept away into the Atlantic undetected.

Following procedure, Grandmère then went back for survivors. In the days after the sinking, the Canadian naval vessel was criticized in the Sydney Post-Record and The Globe and Mail — as well as other media outlets — for not immediately stopping and helping save survivors; but that was against operating procedures, and would have placed her in immediate danger of being sunk as well. After picking up survivors, Grandmère sailed for Sydney because it had better hospital facilities than Port aux Basques. 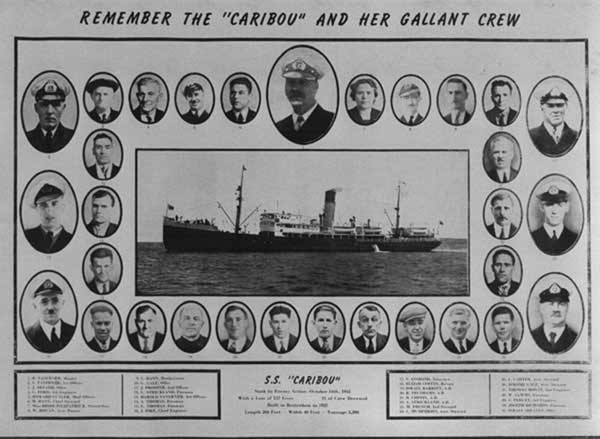 Caribou was carrying 46 crew members and 191 civilian and military passengers. The ship’s longtime Captain, Benjamin Taverner, was commanding the vessel as she was struck, and perished along with his sons Stanley and Harold, who served as first and third officers respectively. Of the deceased, two were rescued at first, but they later died from exposure to the cold water. A total of 137 people died that morning with the passenger and crew totals broken down as follows: of 118 military personnel, 57 died; of 73 civilians, 49 died; of the 46 crew members, 31 died. There were 34 bodies found and brought to Port aux Basques by fishing schooners chartered by the Newfoundland Railway Company. Fishermen from the nearby Newfoundland southcoast communities went to the scene of the sinking and picked up a number of bodies, including those of nine Canadian service personnel. They were brought ashore to Port au Basque, where the local inhabitants built coffins and prepared them for burial.

On October 19, the bodies found from Caribou were placed aboard a train and shipped east for burial. Bodies of the three members of the RCAF were removed at Gander and buried in the RCAF cemetery on October 20. The bodies of the army and naval personnel, including Margaret Wilkinson, the only Canadian Nurse killed by enemy action in World War II continued on to St John’s for burial.

To prevent rumors, the Royal Canadian Navy allowed the Sydney Post-Record and other media outlets to report the sinking, almost as soon as it happened, one of the few times that war censorship was temporarily lifted in this period. The sinking made front-page news in both The Toronto Daily Star and The Globe and Mail newspapers later that week. 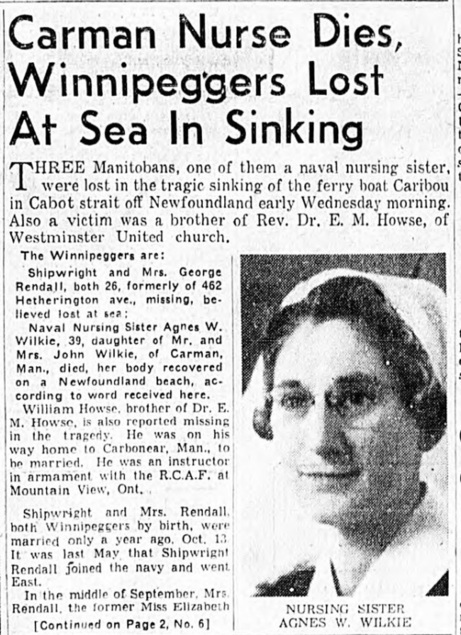 In 1986, the CN Marine/Marine Atlantic ferry MV Caribou was named after SS Caribou. She plied the same route as the original ferry, travelling between North Sydney and Port aux Basques. On her maiden voyage, May 12, 1986, the ship stopped at the location where its predecessor sank. At approximately 5:30 a.m., survivor Mack Piercey, one of 13 survivors on board for the occasion, tossed a poppy-laden memorial wreath into the ocean and then the ship continued on to Port aux Basques to complete the voyage.

In 2014, as part of a special dedication service in the town of Port Hawkesbury’s Veterans Memorial Park, SS Caribou‘s passengers and crew were honored. Part of the dedication service included the unveiling of the anchor from the decommissioned MV Caribou as a new feature for the memorial.

Lieutenant-Commander Margaret Brooke was a Royal Canadian Navy Nursing Sister who survived the sinking of SS Caribou. She and a colleague, Sub-Lieutenant Agnes Wilkie, clung to ropes on an overturned lifeboat until hypothermia caused SLt Wilkie to lose consciousness. LCdr Brooke held onto the lifeboat with one hand and her unconscious friend with the other until daybreak when, despite her best efforts, a wave pulled SLt Wilkie away. For her selfless act, Brooke was named a Member of the Order of the British Empire. In 2015, the Government of Canada announced that the second of the Harry DeWolf-class offshore patrol vessels building as part of the Arctic and Offshore Patrol Ship project would be named HMCS Margaret Brooke.

In 1983, the Chamber of Commerce of Channel-Port aux Basques struck a “Nautical Dollar” commemorative coin in memory of the S.S. Caribou sinking. On one side of the medallion is an image of Caribou with the dates 1925-1942 and the inscription HISTORICAL GULF FERRIES and on the reverse side is a dory with two fishermen. This coin was worth $1.00 if used within the Chamber’s area up to September 1983.

Scott #164, 2 cents deep carmine, was released on August 10, 1929. The stamp features the S.S. Caribou and promotes her 8-hour ferry passage to Nova Scotia. It is a re-engraved version of a design originally released on January 3, 1928, having been recess printed by Thomas de la Rue Ltd. of London, perforated 13½x13 (Scott #146). The main differences are that on the 1928 varieties the “D” in NEWFOUNDLAND is 1 mm from the scroll at the right and the flag at the stern is lower than the top of the boat davit; on the 1929 stamps, the “D” is ½ mm from the scroll and the flag rises above the davits. The 1929 re-engraved stamps were printed by Perkins Bacon Ltd. and are unwatermarked, comb-perforated 13½ 14. In July 1931, the re-engraved stamps were reissued — again printed by Perkins Bacon — with the 2-cent denomination appearing in red (rather than the deep carmine of 1928 and 1929) but also with a watermark of the Newfoundland coat of arms, perforated 13½x14 (Scott #173). The watermark does not show on every stamp in the sheet so pairs are collected with one bearing a watermark and the other not showing any traces of a watermark.  Scott #173 also exists with the watermark inverted. 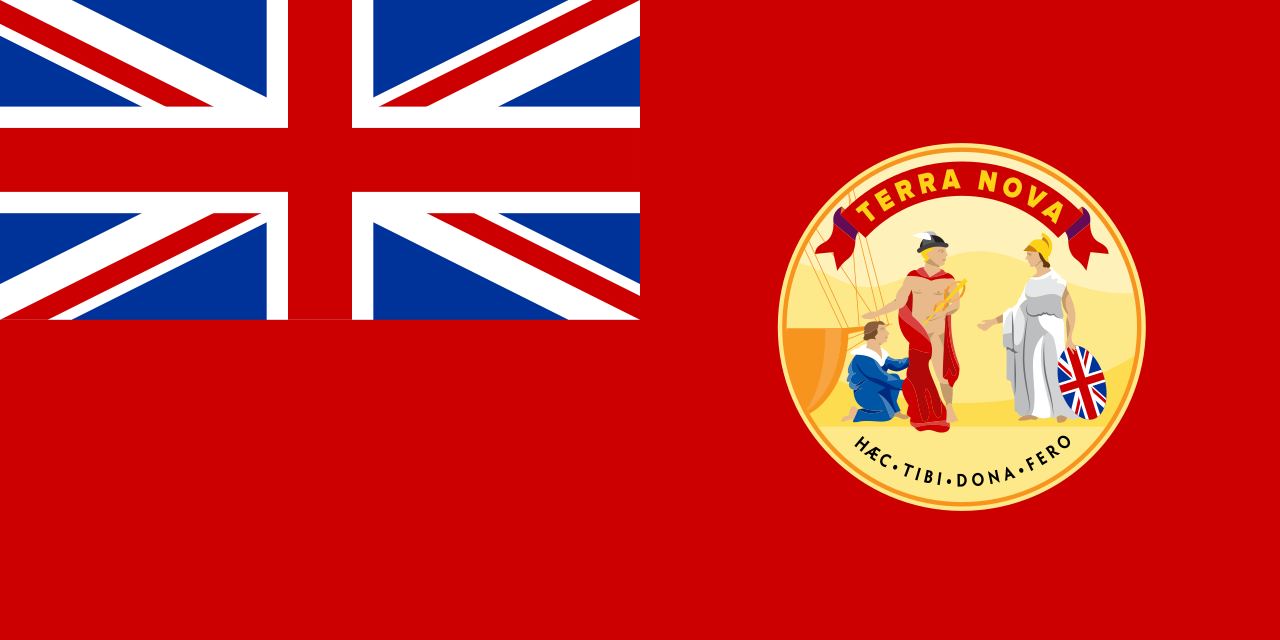