This is the 700th article I’ve posted to A Stamp A Day since started the blog back on July 1, 2016. I haven’t missed a single day although some of the earlier posts were quite brief and a few times I posted articles saying I was “too tired” or “too busy” to write much of anything and then I ended up writing much more than planned. There have been some real monsters, topping-out at 10,000 to nearly 15,000 words with the average being around 3500-4000 words. I’ve been adding a lot more illustrations since late last year in an attempt to break up the text into much smaller chunks. Often, finding decent-resolution relevant photos, maps and flags is more time-consuming than compiling and editing the actual articles! I enjoy every minute of each day’s creation — even when done in Thailand’s intense tropical heat (which never really cools to a bearable level with the nights usually hotter than the days!) and rather regular sudden cuts to the electricity and/or Internet service. I might yell a bit at the screen when at times, but, in the end, I love learning so much about what is actually portrayed on my stamps that it negates any minor annoyances.

For Post #700, I had planned a simple summary of the past nearly-two years with the featured stamp bearing a prominent number “700”. I thought I had a German Weimar Republic hyper-inflation stamp bearing that denomination in Deutsche marks but the closest I found was a really nice 1,000-mark stamp (not to mention one valued at 100,000 marks but I won’t live long enough to reach that milestone; one thousand posts might be pushing it if I don’t purchase a lot more stamps really soon!). At any rate, I did find a few contenders with “7’s” and “70’s” before coming across today’s featured stamp on a postcard I received almost three years ago. The 7-ruble denomination features two zeros following the decimal point which is close enough in appearance to a “700” for me to say, “That’s it!” I’m pretty easy, after all. It’s an attractive stamp bearing a very interesting ship indeed — the Soviet icebreaker Lenin was not only the world’s first nuclear-powered surface ship but also the first nuclear-powered civilian vessel, becoming operational in 1959 about the time that the United States’ NS Savannah was launched. The postcard on which this stamp was affixed bore almost the full set, missing only the 10-ruble 50 Let Pobedy. 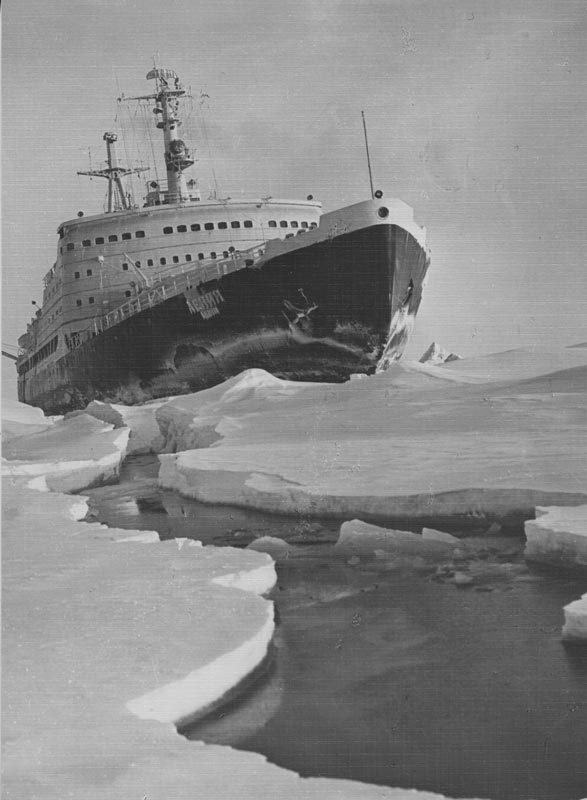 Lenin (Ленин) was built at Baltic Shipbuilding in Leningrad, USSR, launched in 1957 and entered operation in 1959. She worked clearing sea routes for cargo ships along Russia’s northern coast. From 1960 to 1965, the ship covered over 85,000 miles during the Arctic navigation season, of which almost 65,000 were through ice. On April 10, 1974, the vessel was awarded the Order of Lenin. She was officially decommissioned in 1989. Lenin was subsequently converted to a museum ship and is now permanently based at Murmansk.

When launched on December 5, 1957, Lenin was powered by three identical OK-150 pressurized water reactors (PWR) with a maximum heat output of 90 MWt. The shaft power was 44 ,000 horsepower. Enriched uranium was used as fuel (the content of U-235 was equivalent 85 kg), and distillate water was used as a moderator and for heat transfer. The reactor core was 1.6 meters high and measured one meter in diameter. The core consisted of 7,704 fuel pins in 219 fuel assemblies. During Lenin‘s first six operating years, the icebreaker cut over 82 thousand nautical miles of ice and independently led more than 400 vessels.

In February 1965, there was a loss-of-coolant accident. After being shut down for refueling, the coolant was removed from the number two reactor before the spent fuel had been removed. As a result, some of the fuel elements melted and deformed inside the reactor. This was discovered when the spent elements were being unloaded for storage and disposal. The decision was made to unload the remaining 124 spent nuclear fuel assemblies together with the neutron absorbing rods and control grid. 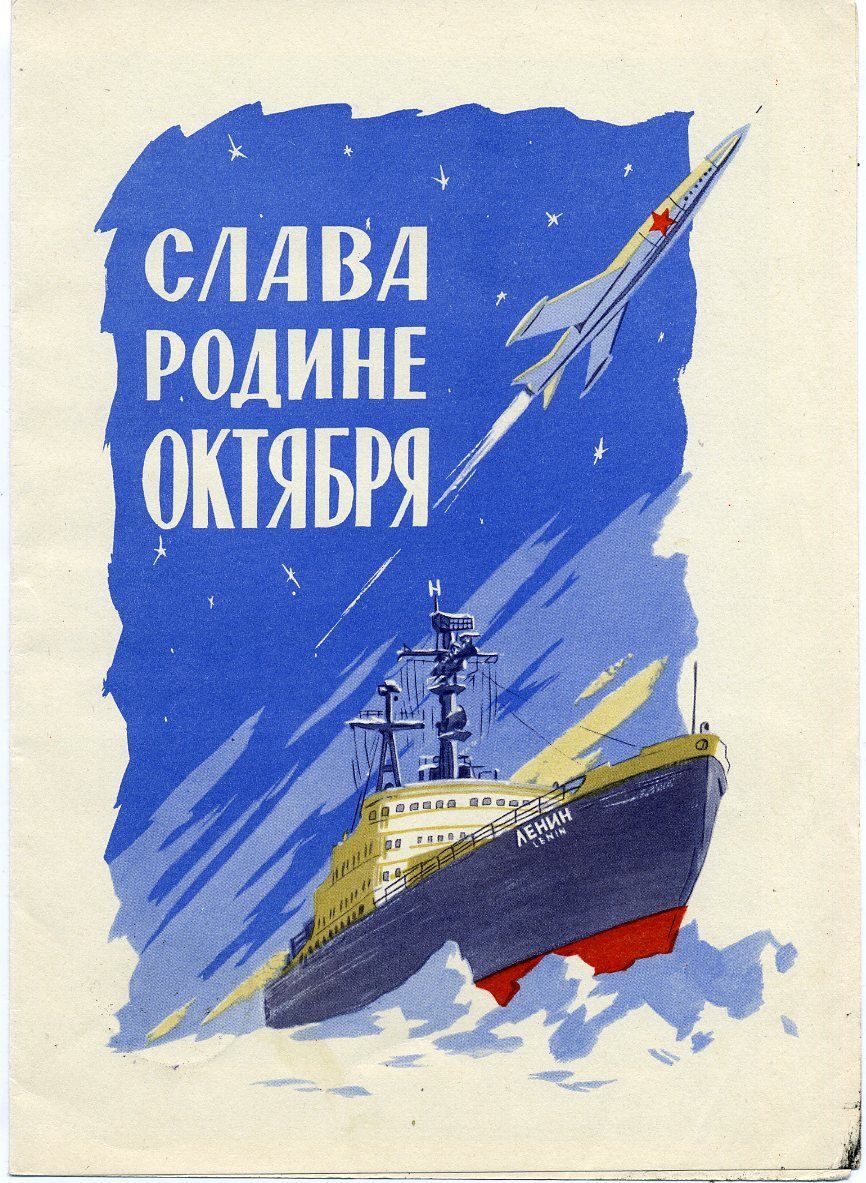 A special cask was built onshore to implement this operation. A part of the reactor containing spent nuclear fuel (SNF) was placed into the cask and filled with furfurol-based solidifying matter. This cask was then stored for two years. In 1967, it was reloaded onto a pontoon, towed by a tug to the eastern coast of the Novaya Zemlya Archipelago and dumped in Tsivolki Bay.

In its late-1960s configuration, at full capacity Lenin used five to six pounds of uranium-235 per 100 days.

A second nuclear accident aboard Lenin took place in 1967 when the pipe system of the third circuit sprung a leak following the loading of fresh nuclear fuel. In this instance it was necessary to open the biological shield of the reactor compartment in order to locate the leakage. This protection was made of concrete mixed with metal shavings and it required the use of sledgehammers to break through the shield. This led to further damage of the reactor installation. Upon later examination, it became clear that it would be impossible to repair the damage incurred to the reactor installation by the sledghammers.

By that time an upgraded model of the reactor installation, OK-900, was almost completed. The failure to repair the cooling system prompted the replacement of the whole reactor installation on Lenin, and consequently, the whole 3,500-ton reactor compartment including steam generators and pumps was to be cut out. Since one of the reactors of the damaged OK-150 installation had been recently loaded with fresh fuel, it was decided to remove all of the assemblies and to send the nuclear fuel to the manufacturer. However, both the internal and external surfaces of the assemblies showed significant levels of radioactive contamination; therefore all assemblies were dismantled and the fuel elements were removed (36 fuel elements in one assembly). After that, the elements containing fresh nuclear fuel were decontaminated using chemical solutions and carefully wiped clean. Only then they were sent to the manufacturing plant.

The icebreaker was then towed to the Zvezdochka Shipyard in Severodvinsk, Archangelsk County, where the vessel remained from December 12, 1967, until May 1970, while a new OK-900 reactor installation was being installed. Removal operations of the OK-150 reactor plant were carried out at the Zvezdochka yard  and took 38 months. The operation included the following two stages:

The OK-900 reactor plant had two reactors with four steam generators and four primary circulating pumps. These powered three sets of electric motors to drive the ship’s three propellers. The first OK-900 reactor went into operation on April 22, 1970, with the second reactor starting up the next day. Repair and pre-setting operations lasted until June 20. The OK-900 reactor plant then remained in operation until Lenin was decommissioned in 1989 due to her hull having worn thin from ice friction. She was laid up at Atomflot, a base for nuclear icebreakers in Murmansk, The spent nuclear fuel was removed from the reactors in 1990.

During the second half of the 1990s, check-up operations were carried out and steam generator piping in the form of cutting metal samples for testing. The results of these tests were applied towards developing solutions aimed at prolonging the active use of power plants in nuclear ships.

Lenin is currently moored in the harbor in Murmansk about 1 kilometer from the center of the city. In the early months of 2000, a decision was made to convert the icebreaker into a museum ship. According to Pravda.ru, repair and conversion work was completed in 2005. She was moved to a specially-constructed berth at the passenger terminal in the Port of Mumansk on May 8, 2009. A popular onboard exhibition partly funded by Arctic Centre in Murmansk, describes the technology and history of icebreaking.

The icebreaker Lenin has been portrayed on a number of stamps including USSR Scott #2162 released on December 31, 1958; USSR Scott #3107 released on October 23, 1965; USSR Scott #4725 released on December 20, 1978; Romania Scott #1296 released on October 25, 1959; and North Korea Scott #2425, a souvenir sheet released on November 26, 1984. The Russian Federation released a set of four stamps featuring atomic-powered icebreakers on June 18, 2009 (Scott #7143-7146). These were printed by lithography and perforated 12 x 11½. Lenin is featured on the 7-ruble denomination while the 8-ruble stamp pictures Taimyr, the 9-ruble value portrays Yamal, and the 50 Let Pobedy is seen on the 10-ruble denomination. I received three of the four stamps of this issue on a single postcard, received on August 14, 2015, after traveling more than a month from Siberia to southern Thailand.

A few more images of Lenin, including interior shots of her preservation as a museum ship in Murmansk, can be seen in my Flickr album devoted to the icebreaker.