In Cambodia, dance (របាំ, robam in Khmer) consists of three main categories: Khmer classical dance, or Robam Preah Reach Trop, a highly stylized dance form originating from the royal court used for invocation, entertainment and to pay homage; folk dance which portrays cultural traditions; and social dances performed in social gatherings. Robam Tep Apsara (របាំទេពអប្សរា, literally, Dance of the Apsara Divinities) is the title of a Khmer classical dance created by the Royal Ballet of Cambodia in the mid-20th century under the patronage of Queen Sisowath Kossamak. The Apsara is played by a woman, sewn into tight-fitting traditional dress, whose graceful, sinuous gestures are codified to narrate classical myths or religious stories.

An apsara is a female spirit of the clouds and waters in Hindu culture. They figure prominently in the sculpture, dance, literature and painting of many South Asian and Southeast Asian cultures. There are two types of apsaras; laukika (worldly), of whom thirty-four are specified, and daivika (divine), of which there are ten. Urvasi, Menaka, Rambha, Tilottama and Ghritachi are the most famous among them.

In Indian mythology, apsaras are beautiful, supernatural female beings. They are youthful and elegant, and superb in the art of dancing. They are often wives of the Gandharvas, the court musicians of Indra. They dance to the music made by the Gandharvas, usually in the palaces of the gods, entertain and sometimes seduce gods and men. As ethereal beings who inhabit the skies, and are often depicted taking flight, or at service of a god, they may be compared to angels.

Apsaras are said to be able to change their shape at will, and rule over the fortunes of gaming and gambling. Apsaras are sometimes compared to the muses of ancient Greece, with each of the 26 Apsaras at Indra’s court representing a distinct aspect of the performing arts. They are associated with fertility rites. The Bhagavata Purana also states that the apsaras were born from Kashyapa and Muni.

In Cambodia, apsaras represent an important motif in the stone bas-reliefs of the Angkorian temples dating between the 8th and 13th centuries AD. However, all female images are not considered to be apsaras. In harmony with the Indian association of dance with apsaras, Khmer female figures that are dancing or are poised to dance are considered apsaras; female figures, depicted individually or in groups, who are standing still and facing forward in the manner of temple guardians or custodians are called devatas.

Angkor Wat, the largest Angkorian temple (built AD 1116–1150), features both apsaras and devata, however the devata type are the most numerous with more than 1,796 in the present research inventory. Angkor Wat’s architects employed small apsara images (30–40 cm) as decorative motifs on pillars and walls. They incorporated larger devata images (all full-body portraits measuring approximately 95–110 cm) more prominently at every level of the temple from the entry pavilion to the tops of the high towers. In 1927, Sappho Marchal published a study cataloging the remarkable diversity of their hair, headdresses, garments, stance, jewelry and decorative flowers, which Marchal concluded were based on actual practices of the Angkor period. Some devatas appear with arms around each other and seem to be greeting the viewer. “The devatas seem to epitomize all the elements of a refined elegance,” wrote Marchal.

The bas-reliefs of Angkorian temples has become an inspiration of Khmer classical dance. An indigenous ballet-like performance art of Cambodia, is frequently called the Apsara Dance. The dance was created by the Royal Ballet of Cambodia in the mid-20th century under the patronage of Queen Sisowath Kossamak of Cambodia. The role of the apsara is played by a woman, wearing tight-fitting traditional dress with gilded jewelries and headdress modelled after Angkor bas-reliefs, whose graceful, sinuous gestures are codified to narrate classical myths or religious stories.

In the 1940s, Queen Sisowath Kossomak Nearirath Serey Vatthana, the wife of King Norodom Suramarit, was sent an invitation to visit the Sothearath primary school. While there, she saw the school mistress prepare an inspirational Angkorian apsara dance performed by young school children utilizing paper apsara costumes including Crown, Sampot and Flower, all referencing apsara represented at Angkor Wat. The Queen had the idea to recreate the dance.  Her first granddaughter, Princess Norodom Buppha Devi, a daughter of Norodom Sihanouk, to become the first professional apsara dancer of the modern era. The princess started practicing the dance at 5 years old and danced apsara for first time during King Norodom Sihanouk’s tenure.

In 1967, the fine–boned young princess, clad in silk and glittering jewels, performed beneath the stars on the open pavilion within the palace walls, accompanied by the royal dance troupe and the pinpeat orchestra. Selected by her grandmother, Queen Sisowath Kossomak, to become a dancer when she was only a baby, she toured the world as the principal dancer of the apsara role.

The costumes of the apsara role is based on the devatas as depicted on bas-relief of Angkor Wat. They wear a sampot sarabap, a type of silk brocade that is intricately pleated in the front.

The headdress of the lead apsara has three points or tips, with two rows of spherical decorations like the apsara pictured at Angkor Wat. Headdress worn by the subordinate dancers commonly have three points and only one row of sphere decoration. These crowns often include garlands of artificial hair with ornate adornments. The five-points crowns are frequently absent in modern dance routines.

The round decorative red collar is highly visible; found just below the neck, the collar is embellished with detailed gold-colored copper ornaments and beaded designs. The elaborate decorations are usually found gracefully decorated in two separate rows. Additional copper ornaments are found hanging below these rows, in the shape of difficult-to-describe warped spear tips, the largest of which is centralized.

Dangling earrings, which are bound in bunches, traditionally stretch almost to the shoulder. These dangling earrings are mainly duplicated from the design of the krorsang flower (a large spiny tree with sour fruit) and are preferred to the mete (chili) flowers, which are held to be less beautiful.

There are a total of four types of wrist jewelry: kong rak, patrum, kong ngor, and sanlek. The first is a truly beautiful diamond-like studded bracelet — a fine and elegant wrist jewel decorated in a tree branch-like fashion; the second is more of a spring-like coiled gold colored thick copper while the third type of bracelet (two sets are worn) are small round beaded orb/sphere bunches delicately connected to one another; the last bracelet is an intricate and well decorated thickly rounded jewel. Additionally an Apsara dancer may be found wearing a garland of jasmine.

Two types of gold ankle jewelry are usually worn by the Apsara dancer, the first being kong tong chhuk while the the second is kong ngor (or kong kravel).

The sangvar is a loosely decorated band of beads worn crosswise. The golden flower is considered a body-decorating element, either worn on the waist or carried during the performance. It too is gold in color, and made of thin flexible copper.

On April 13, 1985, the Kingdom of Cambodia issued a three-stamp set portraying different Khmer traditional dance. These were printed by lithography and perforated 12½. A single Apsara dancer is pictured on the 3-riel stamp, the highest value of the set. 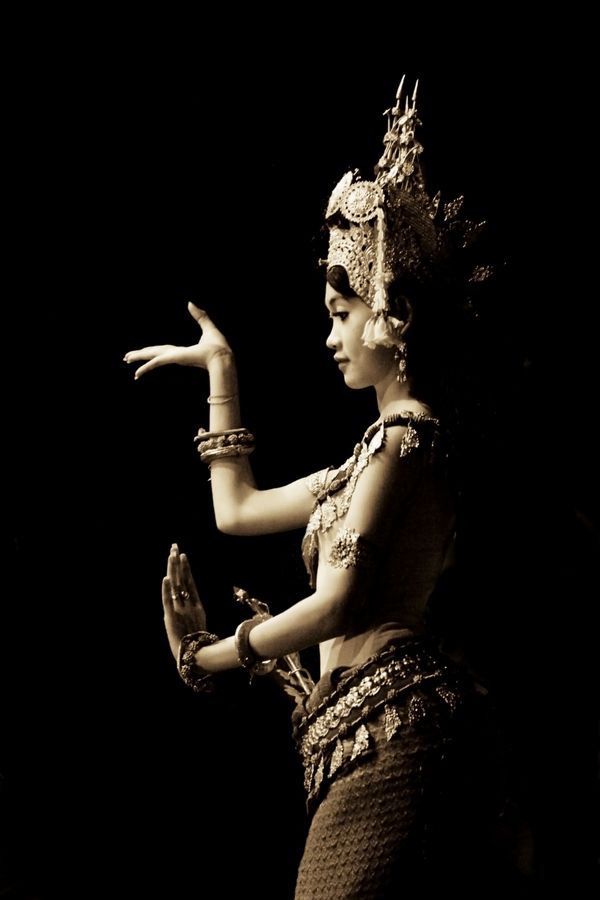