For today’s “random stamp”, I chose one from Denmark — the second this month — which reflects my love of archaeology and earthenware pottery. In the early 1990’s, as a member of the Kansas Anthropological Society, I participated in the Kansas Archeology Training Program doing fieldwork near the Arkansas River in the southeastern portion of the state. I soon enrolled in pertinent courses at Johnson County Community College and a weeklong student “fieldtrip” to New Mexico led to my move there where I (briefly) majored in Archaeology at the University of New Mexico. I also ended up collecting numerous earthenware bowls and pots created by various Native American artisans in the state.

Earthenware is glazed or unglazed nonvitreous pottery that has normally been fired below 1200°C. Porcelain, bone china and stoneware, all fired at high enough temperatures to vitrify, are the main other important types of pottery.

According to The Technique of Pottery byDora Billington (London: B.T.Batsford, 1962), earthenware comprises

all primitive pottery whatever the color, all terra-cottas, most building bricks, nearly all European pottery up to the seventeenth century, most of the wares of Egypt, Persia and the near East; Greek, Roman and Mediterranean, and some of the Chinese; and the fine earthenware which forms the greater part of our tableware today.

Pit-fired earthenware dates back to as early as 29,000–25,000 BC. Outside East Asia, porcelain was manufactured only from the 18th century, and then initially as an expensive luxury.

After it is fired, earthenware is opaque and non-vitreous, soft and capable of being scratched with a knife. The Combined Nomenclature of the European Communities describes it as being made of selected clays sometimes mixed with feldspars and varying amounts of other minerals, and white or light-colored (i.e., slightly greyish, cream, or ivory).

Generally, earthenware bodies exhibit higher plasticity than most whiteware bodies and hence are easier to shape by RAM press, roller-head or potter’s wheel than bone china or porcelain.

Due to its porosity, earthenware, with a water absorption of 5-8%, must be glazed to be watertight. Earthenware has lower mechanical strength than bone china, porcelain or stoneware, and consequently articles are commonly made in thicker cross-section, although they are still more easily chipped.

Darker-colored terracotta earthenware, typically orange or red due to a comparatively high content of iron oxide, are widely used for flower pots, tiles and some decorative and oven ware.

Modern earthenware may be biscuit (or “bisque”) fired to temperatures between 1,000 to 1,150 °C (1,830 to 2,100 °F) and glost-fired (or “glaze-fired”) to between 950 to 1,050 °C (1,740 to 1,920 °F), the usual practice in factories and some studio potteries. Some studio potters follow the reverse practice, with a low-temperature bisque firing and a high-temperature glost firing. The firing schedule will be determined by the raw materials used and the desired characteristics of the finished ware.

Historically, such high temperatures were unattainable in most cultures and periods until modern times, though Chinese ceramics were far ahead of other cultures in this respect. Earthenware can be produced at firing temperatures as low as 600 °C (1,112 °F) and many clays will not fire successfully above about 1,000 °C (1,830 °F). Much historical pottery was fired somewhere around 800 °C (1,470 °F), giving a wide margin of error where there was no precise way of measuring temperature, and very variable conditions within the kiln. 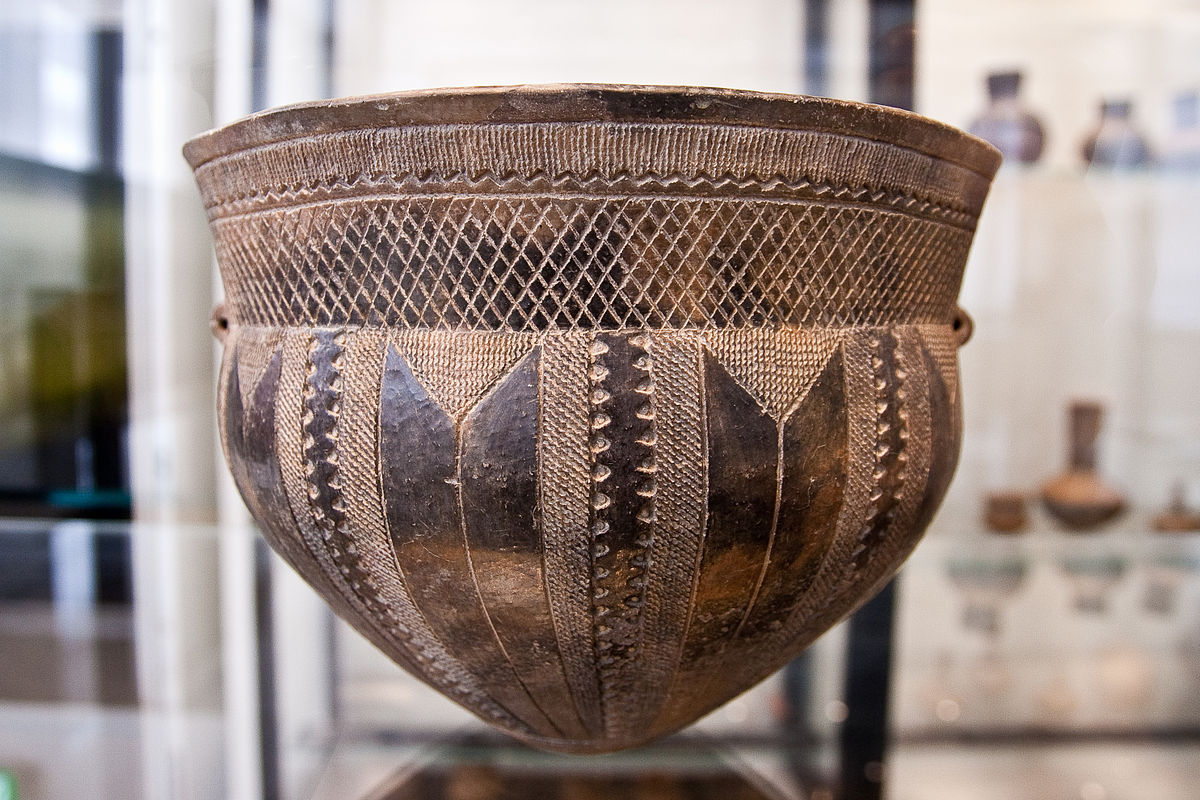 Skarpsallingkarret at the National Museum of Denmark

Skarpsallingkarret is a clay bowl dated to around about 3250 BC, which was found in 1891 at a stone age grave hut at a barrow near the village of Skarp Salling, Vesthimmerland Municipality (Vesthimmerlands Kommune), in Denmark’s North Jutland Region.

The bowl is 19.5 cm. high and is decorated in the so-called Klintebak style, with several types of patterns that are done with the edge of a heart muscle and a crossed bird-string bone. The bowl was designed to hang as evidenced by two horizontal snore riders.

Skarpsallingkarret was found in 1891 by foreman O. Bengtsson and workman Jens Josefsen, who cut stones for use in the construction of railway bridges in connection with the construction of the Hobro-Løgstør railway. During their work, a number of burial mounds in the area were opened. Apparently, some of the local residents fell in some of the pits! The grave where the bowl was found had been 25 meters In diameter and 3-4 meters high. The contractor Ole Nielsen sold the bowl to Th. Christensen for DKK 18, which subsequently sold it to the Randers Museum. It vessel ended up at the National Museum of Denmark in 1892.

During the period 1935-1936, the burial mound was restored with advice from the National Museum and the restored site was opened to the public in June 1936.

A copy of the bowl is displayed at Vesthimmerlands Museum in Års, the seat of Vesthimmerland Municipality. This museum was initiated in 1920 by Johannes V. Jensen, and eventually built in 1935 with various exhibits on important regional cultural history and art. In 1999, the native artist Per Kirkeby and architect Jens Bertelsen designed the new extension buildings and the museum have some of Per Kirkeby’s artwork on display.

Scott #953 is the 3.50-kroner low value in  set of four stamps released by Danish Post on Feburary 13, 1992 (Scott #953-956). The stamps were designed by Carl Van Petersen and engraved by Arne Kühlmann, printed in sheets of 50, perforated 13. The dark violet and brown Skarpsalling stamp was also issued in booklets of 10 (not mentioned in Scott) with the bowl gracing the cover (Facit #HS61). The series was issued to bring attention to various treasures of the National Museum of Denmark.

Nationalmuseet in Copenhagen is Denmark’s largest museum of cultural history, comprising the histories of Danish and foreign cultures, alike. The museum’s main building is located a short distance from Strøget at the center of Copenhagen. It contains exhibits from around the world, from Greenland to South America. Additionally, the museum sponsors SILA — The Greenland Research Center at the National Museum of Denmark — to further archaeological and anthropological research in Greenland.

The museum has a number of national commitments, particularly within the following key areas: archaeology, ethnology, numismatics, ethnography, natural science, conservation, communication, building antiquarian activities in connection with the churches of Denmark, as well as the handling of the Danefæ (the National Treasures).

The museum covers 14,000 years of Danish history, from the reindeer-hunters of the Ice Age, Vikings, and works of religious art from the Middle Ages, when the church was highly significant in Danish life. Danish coins from Viking times to the present and coins from ancient Rome and Greece, as well as examples of the coinage and currencies of other cultures, are exhibited also. The National Museum keeps Denmark’s largest and most varied collection of objects from the ancient cultures of Greece and Italy, the Near East and Egypt. For example, it holds a collection of objects that were retrieved during the Danish excavation of Tell Shemshara in Iraq in 1957.

Exhibits are also shown on who the Danish people are and were, stories of everyday life and special occasions, stories of the Danish state and nation, but most of all stories of different people’s lives in Denmark from 1560 to 2000.

Notable artifacts at the National Museum of Denmark include: