I started my teaching career many years ago as a reading teacher in Thailand, although that isn’t what I’d applied for. I was given an interview with a school director who asked me just two questions, one of which was based on a mention on my resume of a love of reading. It turned out the school was in desperate need of a reading teacher and an ability to read seemed to be the only requirement. (The second question was, “do you know how to wai?” after which the director proceeded to demonstrate each of the several ways to do this Thai form of greeting).

That job opened up an entire world of children’s literature I never knew existed. Oh, I was familiar with Dr. Seuss and other items from my own childhood but I discovered so many authors that had escaped my attention from those days (most notably, Roald Dahl) and fell in love with those that came on the scene after I’d transitioned to “grown-up” books (reading all of the Harry Potter books in less than a year, for example). Although I presently teach mainly teenagers studying for one of an alphabet soup of placement tests (certified for IELTS, TOEIC, and TOEFL) or adults in various types of businesses and organizations (local banks and clothing stores as well as the Royal Thai Navy), I remain very much a supporter of kid’s lit. When today’s “random stamp” led me to a book series I hadn’t heard of, I was thrilled.

Marie-Louise Gay is best known for her Stella and Sam books which have been published in more than twelve languages. They spawned a 52-episode cartoon series in 2013 that airs on Sprout and Family Junior. She has received numerous awards for her written and illustrated works in both French and English, including the 2005 Vicky Metcalf Award, multiple Governor General’s Awards, the Ruth Schwartz Award, the Mr. Christie’s Book Award, the Elizabeth Mrazik-Cleaver Canadian Picture Book Award, and the Marilyn Baillie Picture Book Award. From 1987 to 2015, she won the Canadian Library Association’s annual Amelia Frances Howard-Gibbon Illustrator’s Award four times, all for books that she also wrote.

The first book of the Stella series, Stella, Star of the Sea, was published in 1999. It was an immediate hit, and since then she has written and illustrated five more books featuring the engaging, red-headed heroine, Stella, and her little brother, Sam: Stella, Queen of the Snow; Stella, Fairy of the Forest; Stella, Princess of the Sky; When Stella Was Very, Very Small; with the most recent, Stella, Read Me A Story, appearing in 2013. With gentle humor, freshness, a sense of whimsy and exquisite watercolors, Marie-Louise Gay has put together about two young siblings discovering their world. The first five books were bound into one volume titled Stella! A Treasury which included new art for each of the stories. Additionally, there are three books featuring Stella’s brother, Sam: Good Morning, Sam; Good Night, Sam; and What Are You Doing, Sam? 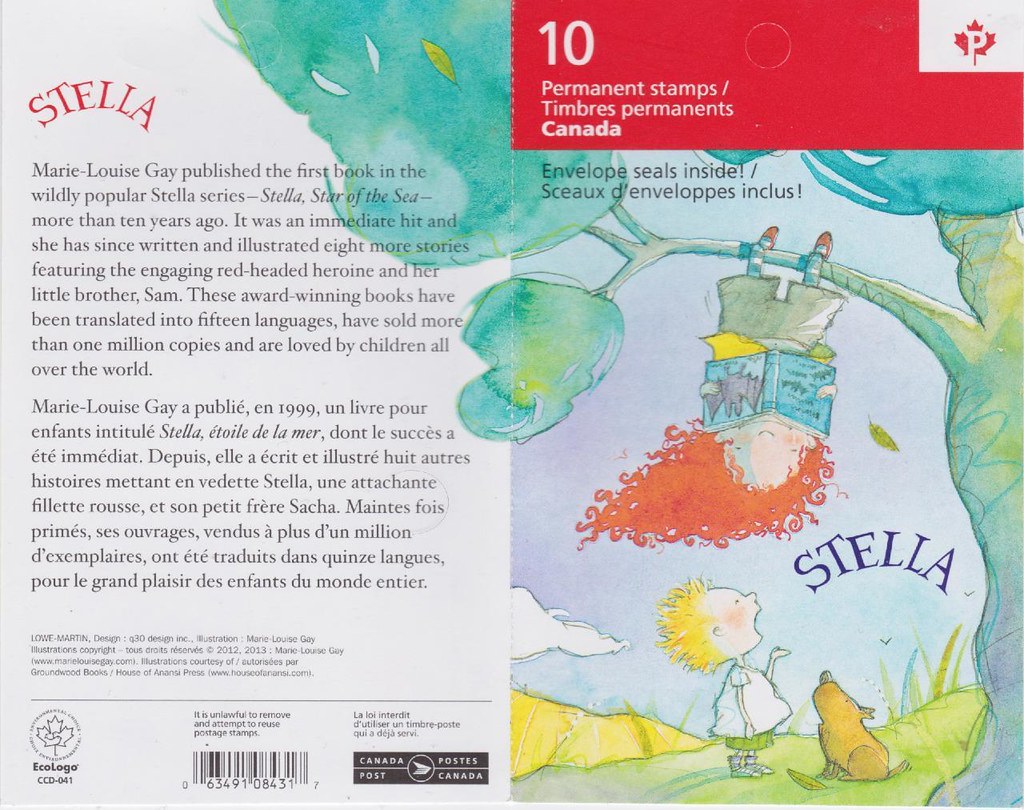 Canada paid philatelic tribute to the Stella series by releasing a pair of stamps in a souvenir sheet as well as a self-adhesive booklet pane on July 5, 2013, based on original watercolor artwork by Marie-Louise Gay. This was the second set in the Children’s Literature series which began in 2012 with Franklin the Turtle. According to the Canada Post press release,

Stella, her brother Sam and their pet dog Fred explore the world around them, bringing readers along on their many adventures. The three spend a day in the forest, where Stella answers Sam’s questions about the forest’s inhabitants. They take a nocturnal walk to explore the moon and the stars in the company of racoons, fireflies and bats. They enjoy a winter escapade, complete with snowballs, snow angels, and snow-covered trees.

Stella hangs upside down from a tree on one stamp. Another shows her sitting by the ocean, reading a book with her little brother, Sam, while a boat sails by. Their pet dog, Fred, sits behind them. Gay says the sibling relationship is important to her stories. “Through it, we explore the personalities of Stella and Sam and the way their relationship is familiar to all children,” she said in an interview published on the Canada Post website. “Stella is the older sibling, bolder, more knowledgeable, inventive and protective of her younger, more timid sibling, who can be fearful sometimes, but is always curious and trustful of his sister. 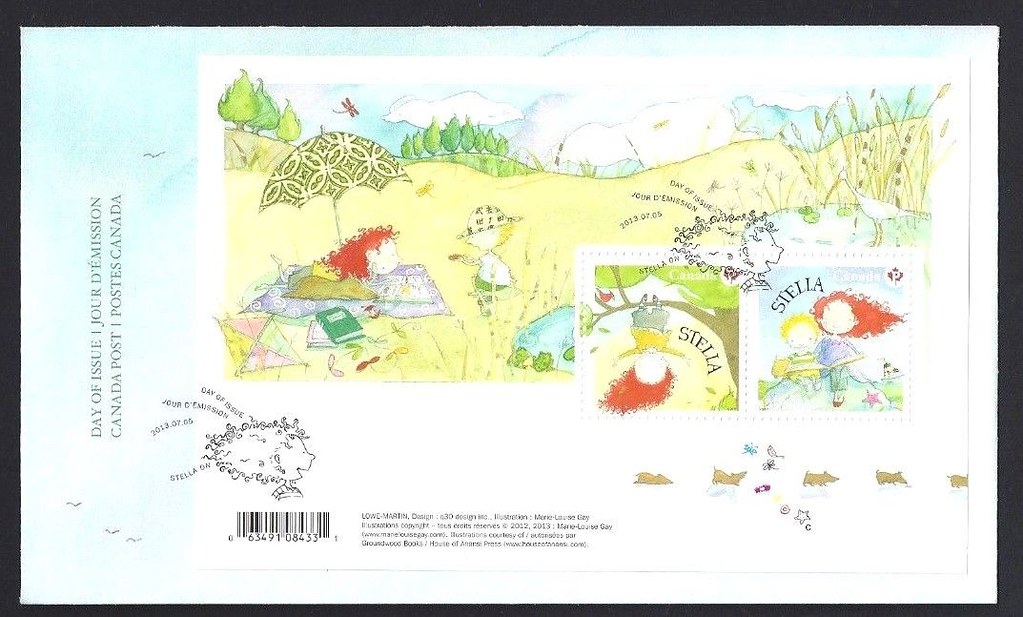 The souvenir sheet contains the two designs in non-denominated “P” (permanent) stamps, perforated 13 (Scott #2652 for the sheet, #2652a for the stamp with Stella in a tree and #2652b for the one of her and Sam). The set was designed by Peter Scott of Q30 design Inc. based on the watercolors painted by Mary-Louise Gay with the images cropped to place the focus on Stella hanging upside down from a tree, and on Stella, Sam and Fred sharing a book together. The engraving was done by Lowe-Martin. These were 200,000 souvenir sheets printed by offset lithography in seven colors, perforated 13. The self-adhesive stamps (Scott #2653 and 2654) were released in a booklets of 10 stamps each with serpentine die-cut perforations of 13½ with some 400,000 copies of the booklet produced giving a total quantity of 2,000,000 per stamp.

In Gay’s blog, she calls stamps “tiny windows to the world” and writes,

“I was very happy about the choice of images, because, to me, they perfectly reflect Stella and Sam’s personalities, as well as some of the intense joys of childhood – the exuberance and playfulness of Stella hanging upside down from a branch and the sweet, gentle sibling relationship between Stella and Sam as they read a book together.

“Wouldn’t it be wonderful if these stamps encouraged children to write letters, share books with their friends and siblings or hang upside down and pretend they are bats?“