Most lists of useful stamp collecting tools include some form of magnifying glass or loupe as essential to the collector. This is the primary tool for examining condition and authenticity of any stamp or philatelic material, particularly when at stamp shows or visiting your local stamp dealer. Philatelic writer Michael Baadke once wrote “though a magnifier doesn’t protect stamps from damage, it can protect you from buying a damaged stamp.” The image of a nice magnifying glass looking over a group of stamps (or, for that matter, in the hands of a detective such as Sherlock Holmes searching for clues) is certainly iconic. Magnifying glasses appear on enough stamps that it would be an interesting topical to form a collection around.

History doesn’t record who the first person was to view a stamp through a magnifying glass but my guess is that he (or she) was probably looking at a Penny Black. The earliest evidence of a magnifying device was a joke in Aristophanes’ The Clouds from 424 BC, where magnifying lenses to start kindling were sold in a pharmacy, and Pliny the Elder’s “lens”, a glass globe filled with water, used to cauterize wounds. Seneca wrote that it could be used to read letters “no matter how small or dim”. Roger Bacon described the properties of a magnifying glass in 13th-century England. Eyeglasses were first developed in 13th-century Italy.

A magnifying glass (called a hand lens in laboratory contexts) is a convex lens that is used to produce a magnified image of an object. The lens is usually mounted in a frame with a handle but there are also hands-free models with stamps or clamps to secure them to a work surface. A magnifying glass can also be used to focus light, such as to concentrate the sun’s radiation to create a hot spot at the focus for fire starting, something we wouldn’t want to do over our stamps.

A sheet magnifier consists of many very narrow concentric ring-shaped lenses, such that the combination acts as a single lens but is much thinner. This arrangement is known as a Fresnel lens.

The magnification of a magnifying glass depends upon where it is placed between the user’s eye and the object being viewed, and the total distance between them. The magnifying power is equivalent to angular magnification (this should not be confused with optical power, which is a different quantity). The magnifying power is the ratio of the sizes of the images formed on the user’s retina with and without the lens. For the “without” case, it is typically assumed that the user would bring the object as close to one eye as possible without it becoming blurry. This point, known as the near point, varies with age. In a young child, it can be as close as 5 cm, while, in an elderly person it may be as far as one or two metres. Magnifiers are typically characterized using a “standard” value of 0.25 m.

The highest magnifying power is obtained by putting the lens very close to one eye and moving the eye and the lens together to obtain the best focus. The object will then typically also be close to the lens. The magnifying power obtained in this condition is MP0 = (0.25 m)Φ + 1, where Φ is the optical power in diopters, and the factor of 0.25 m represents the assumed near point (¼ m from the eye). This value of the magnifying power is the one normally used to characterize magnifiers. It is typically denoted “m×”, where m = MP0. This is sometimes called the total power of the magnifier (again, not to be confused with optical power). 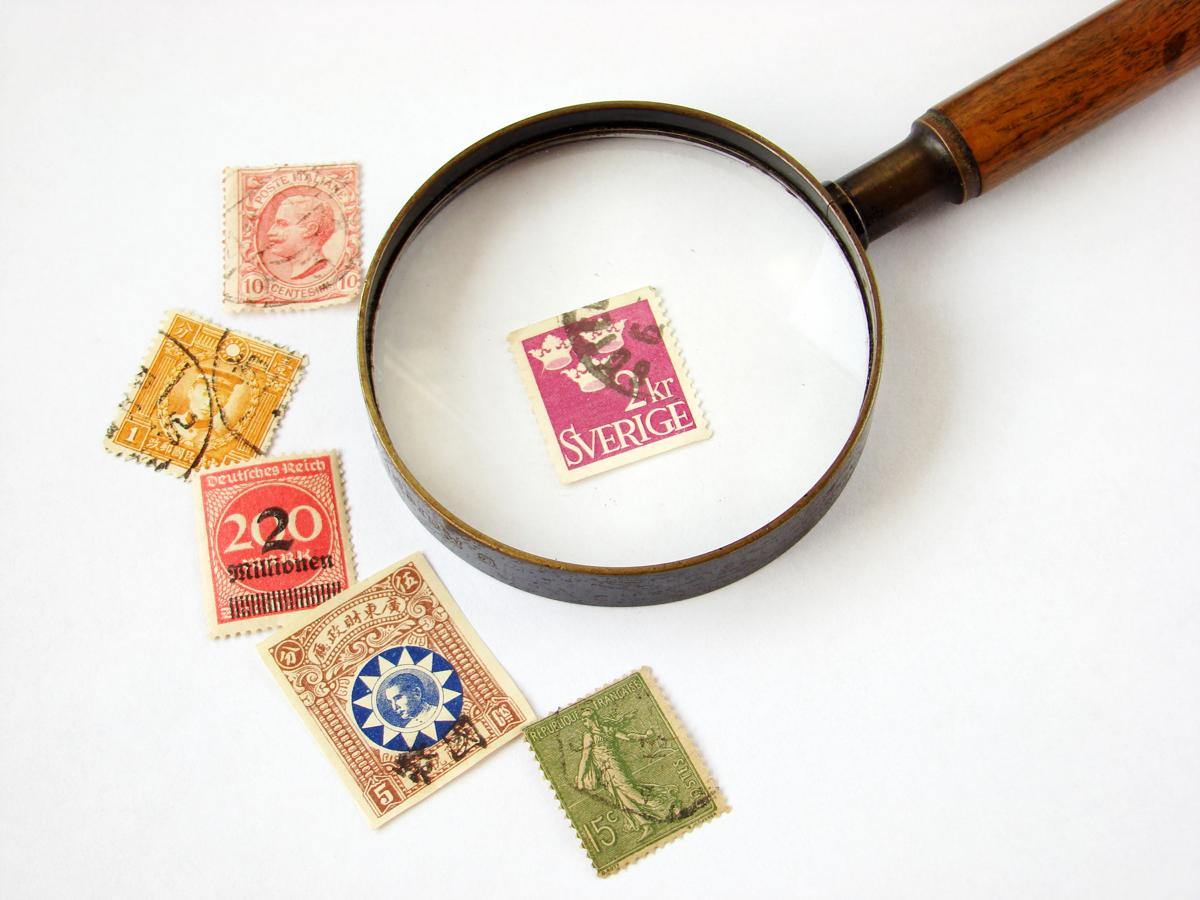 However, magnifiers are not always used as described above because it is more comfortable to put the magnifier close to the object (one focal length away). The eye can then be a larger distance away, and a good image can be obtained very easily; the focus is not very sensitive to the eye’s exact position. The magnifying power in this case is roughly MP = (0.25 m)Φ.

A typical magnifying glass might have a focal length of 25 cm, corresponding to an optical power of 4 diopters. Such a magnifier would be sold as a “2×” magnifier. In actual use, an observer with “typical” eyes would obtain a magnifying power between 1 and 2, depending on where lens is held.

For the general stamp collector, magnification levels of 5x to 10x is recommended and suitable for basic purposes of grading, inspecting watermarks, and distinguishing printing methods. For inspecting security feature microprinting as used often on stamps, you will want 8x or more magnification and higher magnification and or measuring scale magnifiers maybe need and desired at times for error and counterfeit and forgery detection. The firm of Stanley Gibbons Ltd. describes the need for using a magnifying glass by stating,

“Through the magnifying glass stamp designs appear in detailed close-up and are seen to be miniature works of art. You can see the lines or cuts which make up a portrait or scene on an engraved stamp, or study the quality and peculiarities of the other printing processes — the graduated ‘dots’ of photogravure or the smooth honeycomb background of lithographed stamps.”

There are many different kinds of magnifiers, ranging in price from US $2-3 for small hand-held lenses to precision illuminated models that sell for around two hundred dollars. A magnifying loupe with a fixed focal point can be placed carefully over the stamp and the details of the stamp will be enlarged and precisely focused.

My favorite stamp portraying a magnifying glass is United States Scott #1474, released in 1972 and featured on this blog at the beginning of October 2016, my first post about National Stamp Collecting Month. Back then, I never imagined that I would eventually attempt almost an entire month of blogs about the hobby as I am doing this year! Another favorite comes the Swedish and U.S. joint issue in 1986 promoting the hobby. Each nation issued four stamps but there was only one design essentially repeated amongst the eight stamps. The Swedish Scott #1587 and U.S. Scott #2200 each portrayed a page from a stamp album bearing two Swedish stamps (Scott #268 and #271) and a magnifying glass enlarging a United States 3-¢ent Landing of the Swedes and Finns stamp (Scott #836). However, each reversed the positions of the Swedish stamps at top and the Wilmington, Delaware, postmark below.

I also quite like a stamp issued by Mexico on December 19, 2014, on the subject of “philately and postal culture” (Michel #3902) According to Correos de México, the Mexican national postal service,

“The Postal culture includes a wide range of expressions, documents, letters, tools, photographs and other related activities Mail institution that has been around for centuries in the great historical events and daily life of Mexicans objects . The Postal culture is, in this sense, a reflection of the customs, practices, and ways of being that have prevailed at different stages in the history of Mexico.“

Today’s featured stamp is part of a delightful set of stamps released on August 8, 2013, by the Republic of Korea (South Korea) promoting their annual Philately Week.  Printed by Korea Minting & Security Printing Corporation, there were four 300-won designs included in a sheet of 20 (Michel #2943-2946) and a miniature sheet containing two copies of a wide 600-won stamp (Michel #2947) incorporating the designs from the four smaller stamps. There were 3,200,000 copies printed of each of the 300-won stamps (640,000 sheets) and 560,000 copies of the 600-won stamp using the photogravure process, perforated 13. The stamp with the boy examining his stamp through a magnifying glass (Michel #2945) also, thankfully, shows him holding the stamp with tongs as does another picturing a stamp album (Michel #2946).