This is the final stamp collecting-themed article for October’s National Stamp Collecting Month this year (tomorrow’s post will be about Washington Irving’s “The Legend of Sleepy Hollow”). I thought it would be appropriate to take a look at a place where collectors and others interested in stamps and postal history can go every day of the year. Unfortunately, I have yet to visit the Smithsonian’s National Postal Museum. The next time I journey to the United States (hopefully at some point in the next few years), I aim to make the northeastern part of the nation — particularly the area surrounding the District of Columbia — my primary destination.

The National Postal Museum, located opposite Union Station in Washington, D.C., was established through joint agreement between the United States Postal Service and the Smithsonian Institution and opened on July 30, 1993. The museum is located across the street from Union Station, in the building served as the Main Post Office of Washington, D.C. from 1914, when it was constructed, until 1986. The building was designed by the Graham and Burnham architectural firm, which was led by Ernest Graham following the death of Daniel Burnham in 1912.

The museum stores the National Philatelic Collection and also hosts many interactive displays about the history of the United States Postal Service and of mail service around the world. The museum houses a gift shop and a United States Postal Service philatelic sales window, along with exhibits on the Pony Express, the use of railroads with the mail, the preserved remains of Owney (the first unofficial postal mascot), and an exhibit on direct marketing called, “What’s in the Mail for You,” that produces a souvenir envelope with your name printed on it and a coupon for the gift shop. As a Smithsonian museum, admission is free. This museum also includes a library. 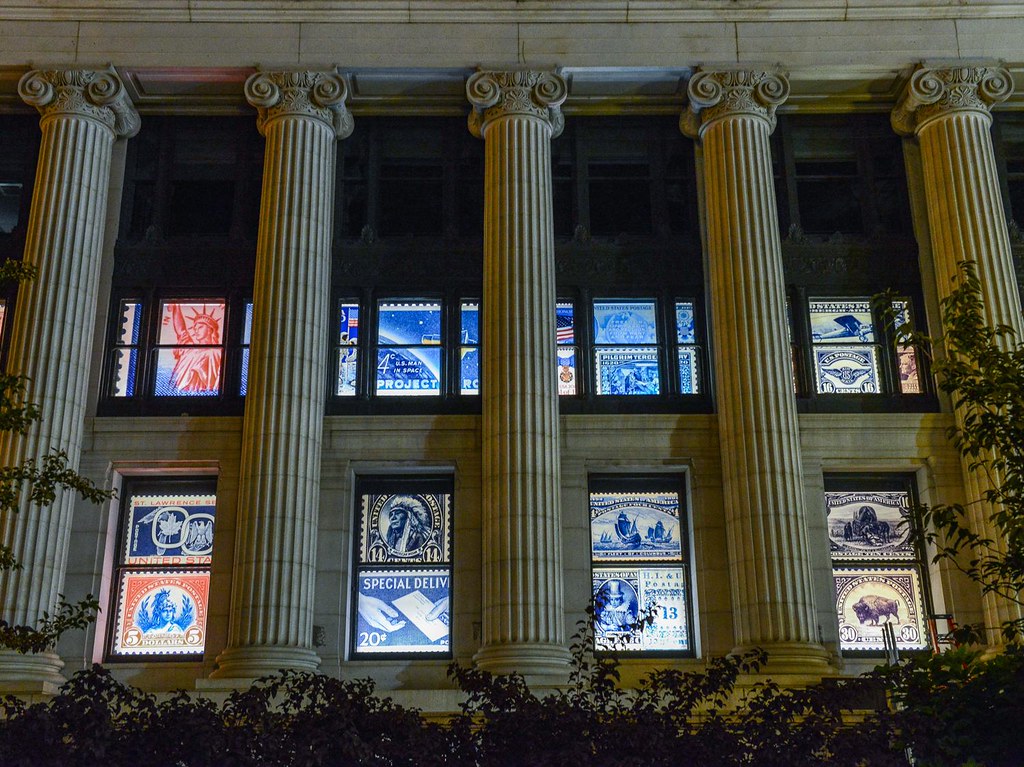 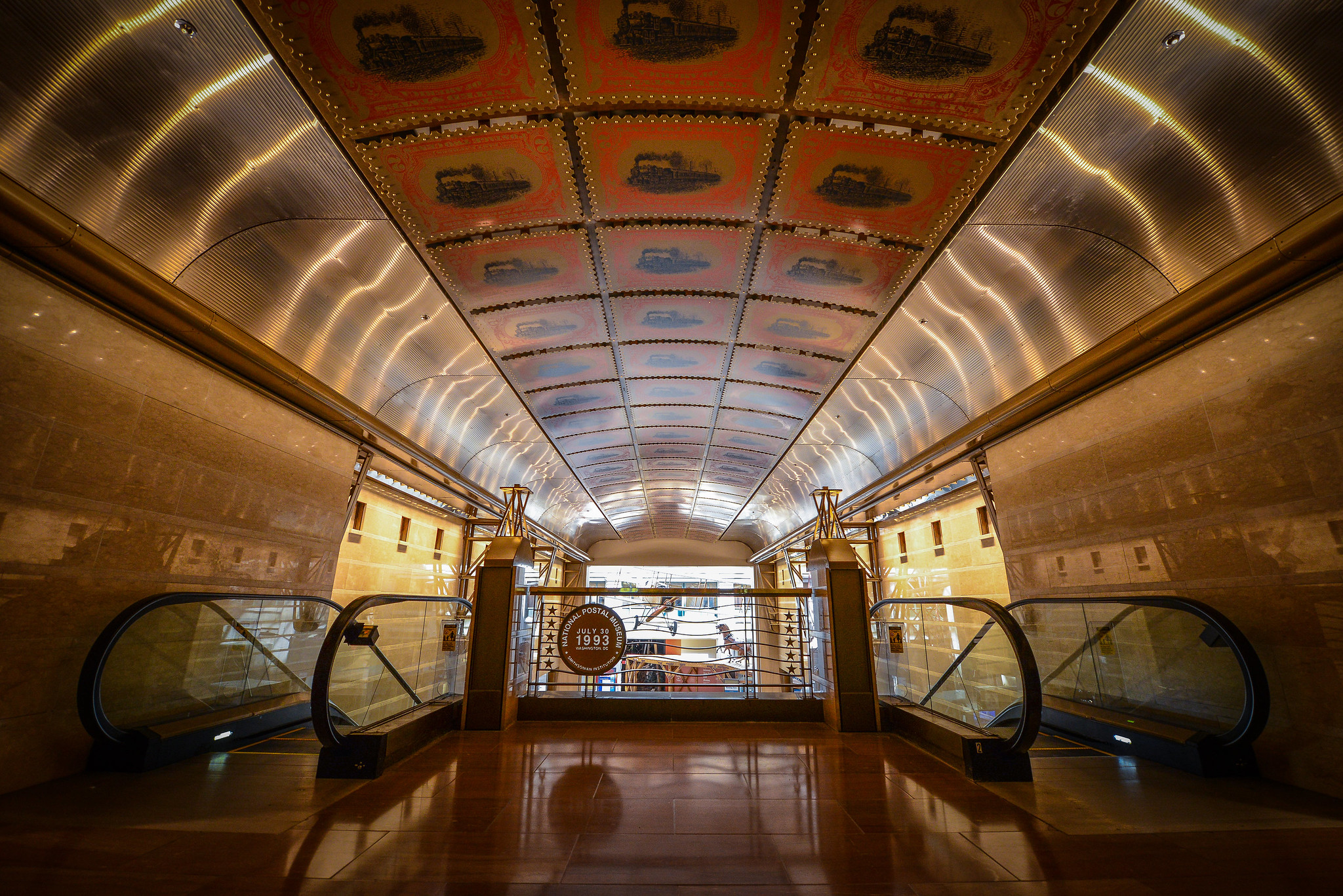 In 2005, the National Postal Museum acquired John Lennon’s childhood stamp collection, which was described in an A Stamp A Day article published on Lennon’s birthday earlier this month. The album is currently on display in an exhibit called “John Lennon: The Green Album” which will continue until February 3, 2019. Since June 2015, the museum has displayed the 1856 British Guiana One-Cent Magenta, the world’s most valuable stamp, which sold for nearly $10 million. That exhibit is due to close this year on December 2.

Other current exhibits include:

Other permanent exhibits and galleries at the National Postal Museum include:

Since 2002, the museum has presented the Smithsonian Philatelic Achievement Award every two years.

As do most branches of the Smithsonian, the National Postal Museum has an extensive online presence including the main website hosting many interesting articles and images of archival items, Pushing the Envelope — the museum’s blog, and Arago which is a resource site divided into two main sections — Philately and Postal Operations.

The United States Postal Service commemorated the Smithsonian’s National Postal Museum with a se-tenant block of four stamps released on the museum’s opening date of July 30, 1993 (Scott #2782a). The opening day ceremony at the museum featured the first day of issue of the stamps and included representation from the U.S. Postal Service, James H. Bruns and Robert McC. Adams, then Secretary of the Smithsonian Institution.

The stamp designs feature historical moments in U.S. postal history and depict objects and themes represented in the museum’s inaugural exhibit galleries. According to the National Postal Museum’s founding director, James H. Bruns, the museum helped determine which objects and images would be used in the design. Many of the elements depicted in the stamps were represented in the museum’s inaugural displays including a Concord stage coach, a 1930s mail truck, and the Inverted Jenny stamp. Bruns said that the “stamps were in effect like a miniature visit to the Museum.”

The Citizen Stamp Advisory Committee (CSAC) and the museum had input in deciding what would be featured on the stamps. Committee members at that time were interested in classical themes and historical events. Unlike other commemorative stamps, the National Postal Museum issue used four stamps to convey the sense of traveling through time.

Interestingly, two artists worked on the design, Lou Nolan and Richard Schlecht. Art Director Derry Noyes thought that the artist Richard Schlecht “did a very good job in conveying the message” through stamps as well as telling the story of transportation. Schlecht’s long career as an artist with National Geographic helped him in working with the interpretation of historical themes. Noyes explained that the stamps are “semi-jumbo” (a little larger) than usual. The complex design features portraits and line drawings. The main figures are framed by a circular white background.

Scott #2779 depicting the 18th century features Benjamin Franklin, reflecting his career as printer, postmaster and statesmen. He is represented by a printing press, mail rider, and Independence Hall. The Franklin portrait is based on the well-known painting by Joseph-Siffred Duplessis which can be found in the Smithsonian’s National Portrait Gallery.

The artwork was completed in ink and watercolor collage on board. The artist’s line drawings became engraved black images of a printing press, stagecoach; airplane, mail truck, letter, and cancellation. In some cases, these elements deliberately overlap the central image. The American Bank Note Company printed 37,500,000 copies of the stamps using the offset-intaglio process, perforated 11.

In closing, I hope you enjoyed this month-long (closer) examination of the hobby of stamp collecting and its permutations than I normally do with A Stamp A Day. While sometimes it was difficult to find enough to build a decent-length article around (tongs, hings and mounts, catalogues spring immediately to mind), on many topics I had such a wealth of details that I wanted to include that, on some days, I spent the entire day working on nothing but the article.I’m not sure if I’ll attempt to do this again next year, although there certainly are enough topics remaining to do so….

November and December, by design (and by certain external factors) will largely see extremely brief articles — probably no more than a paragraph or two on most days! More about the reasons behind this decision in my post on November 1.