I’m a lifelong music fan and have collected audio (and video) in various formats for almost as long as I have collected stamps. However, I have relatively few music-related stamps. Of those, I believe this stamp released by Canada five years ago is the only one I own featuring musicians that I’ve actually seen in concert being too young to attend concerts by The Beatles or Elvis Presley and missing out on Johnny Cash although we once lived near him and my mother used to run into June Carter Cash at the grocery store. I once owned a stamp portraying Bruce Springsteen and I haven’t gotten around to picking up any of Great Britain’s stamps honoring Pink Floyd or David Bowie. Growing up in the American Midwest, the music of Rush was a constant staple of the local radio station (my station of choice was KYYS KY-102 out of Kansas City) and first saw them perform live in 1988 when a local band that I was friends with was asked to open up a few concerts for them.

Rush is known for its musicianship, complex compositions, and eclectic lyrical motifs drawing heavily on science fiction, fantasy, and philosophy. The band’s musical style has changed several times over the years, from a blues-inspired hard rock beginning, later moving into progressive rock, and including a period marked by heavy use of synthesizers. In the early 1990s, Rush returned to a guitar-driven hard rock sound, which continued for the rest of their career.

According to the Recording Industry Association of America (RIAA), Rush ranks 86th with sales of 25 million units in the United States. Although total worldwide album sales are not calculated by any single entity, several industry sources estimated Rush’s total worldwide album sales at over 40 million units as of 2017. The group has been awarded 24 gold, 14 platinum, and 3 multi-platinum albums.

Rush has received nominations for seven Grammy Awards. The band has won several Juno Awards, won an International Achievement Award at the 2009 SOCAN Awards,[11] was inducted into the Canadian Music Hall of Fame in 1994 and the Rock and Roll Hall of Fame in 2013. Over their careers, the members of Rush have been acknowledged as some of the most proficient players on their respective instruments, with each band member winning numerous awards in magazine readers’ polls.

On December 7, 2015, Neil Peart stated in an interview that he was retiring. The following day, Geddy Lee insisted that Peart’s remarks had been taken out of context, and suggested the band was “simply taking a break”. Alex Lifeson confirmed in 2016 the R40 tour was the band’s last large-scale tour. On January 19, 2018, Lifeson stated, “We have no plans to tour or record anymore. We’re basically done. After 50 years, we felt it was enough.”

“The state of Rush in general … Well, I’d say I can’t really tell you much other than that there are zero plans to tour again. As I said earlier, we’re very close and talk all the time, but we don’t talk about work. We’re friends, and we talk about life as friends. I can’t really tell you more than that, I’m afraid. I would say there’s no chance of seeing Rush on tour again as Alex, Geddy, Neil. But would you see one of us or two of us or three of us? That’s possible. “ 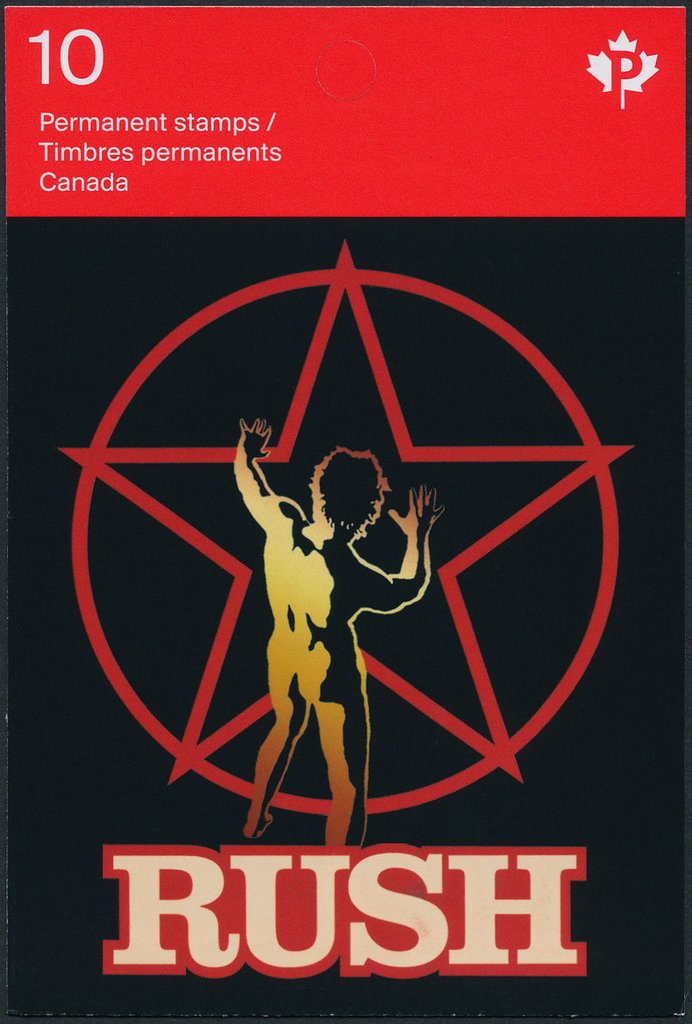 In 2007, Canada Post issued the first set in a multi-year series of stamps honoring Canadian Recording Artists. Musicians portrayed since then have included Gordon Lightfoot, Anne Murray, Joni Mitchell, Robbie Robertson, Bryan Adams, Bruce Cockburn, and Paul Anka among many others. The stamps released on July 19, 2013, were the first to feature band rather than individuals and included The Tragically Hip, The Guess Who, and Beau Dommage in addition to Rush. In April of that year, Rush had become the first Canadian band to be inducted into the Rock and Roll Hall of Fame.

The four stamps in the 2013 set were designed by Louis Gagnon of Paprika and released in a souvenir sheet, perforated 12½, printed by 6-color lithography with foil stamping, embossing plus varnish (Scott #2655 for the sheet and individual stamps given the sub-letters a through d, the Rush stamp being Scott #2655b).  Each design was also released in self-adhesive booklets of ten stamps each with serpentine die cut perforations measuring 13½ (Scott #2656-2659). These were printed using offset lithography with varnish. There were 200,000 copies of the souvenir sheet produced and 250,000 copies of each booklet printed.

The “Starman” logo portrayed on Scott #2655b and #2657 first appeared on the back cover of the 1976 album 2112. Hugh Syme, creator of graphics on many of Rush’s albums, told Jeffrey Morgan in 1983 the Starman “didn’t begin as an identity factor for the band, it just got adopted”.