The barking owl (Ninox connivens), also known as the winking owl, is a nocturnal bird species native to mainland Australia and parts of Papua New Guinea and the Moluccas. They are a medium-sized brown owl and have a characteristic voice with calls ranging from a barking dog noise to a shrill human-like howl of great intensity.

The barking owl was first described by the English ornithologist John Latham in 1801 with the binomial name Falco connivens. Latham commented that the species “Inhabits New Holland, but no history annexed, further than that it has a wonderful faculty of contracting and dilating the iris: and that the native name is Goora-a-Gang.”

The barking owl is colored brown with white spots on its wings and a vertically streaked chest. They have large eyes that have a yellow iris, a discrete facial mask and yellow skin on the feet. Their underparts are brownish-grey and coarsely spotted white with their tail and flight feathers being strongly banded brown and white. They are a robust, medium-sized owl 390–440 mm long and their wingspan is between 850–1200 mm. They weigh between 380 and 960 grams. Size varies only slightly between the male and female birds with the male barking owl being 8-10 percent heavier. They are one of only a handful of owl species exhibiting normal sexual dimorphism. In a banding study conducted in the Pilliga forests of northern New South Wales, males averaged 824 grams with females averaging 745 grams[6][p20]. In Australia, the smallest barking owls are found on Cape York Peninsular and the largest in Southern Australia.

The barking owl lives in mainland Australia along the eastern and northern coast of the continent and the south west areas surrounding Perth. Inland they occupy areas near lakes and waterways or other wooded environments. They also live in drier parts of Papua New Guinea and the Moluccas (Halmahera, Morotai, Bacan and Obi). Once widespread, barking owls are now less common in southern mainland Australia.

They choose to live in forests or woodland areas that have large trees for nesting and foliage cover for roosting. They often reside near river, swamp or creek beds as these features often have large trees with hollows required for nesting and the productivity to support sufficient prey. The only detailed studies of barking owl home-ranges have been conducted in southern Australia where the species is declining. In northern Victoria, barking owl pairs were found to average a home-range of 1424 ha with little overlap between pairs. Foraging was concentrated within forested areas of each home range. These results are mirrored in the Pilliga forests of Northern NSW although there the home ranges were larger, often up to 2500 ha. 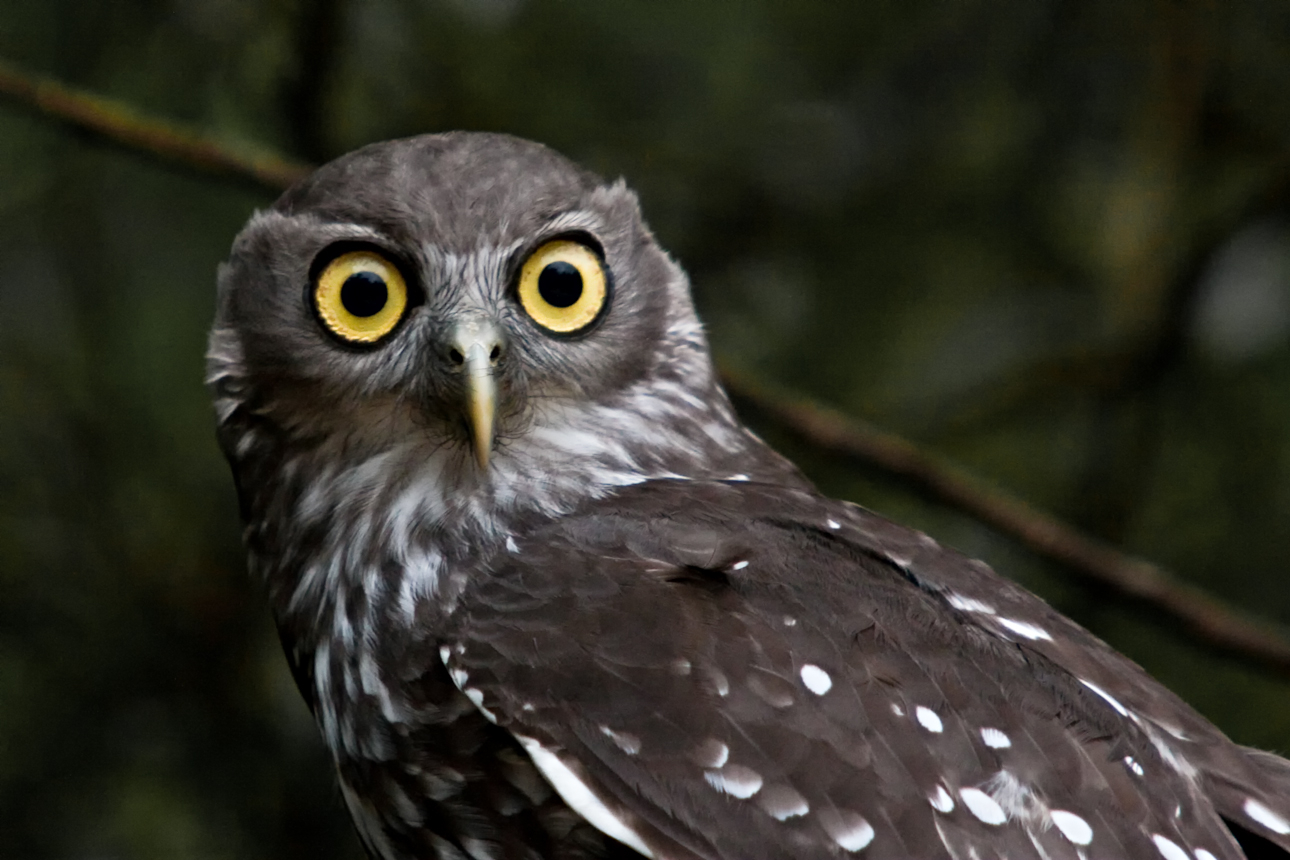 Although barking owls are uncommon and sometimes even rare in many suburban areas it is not unheard of that they get accustomed to humans and even start to nest in streets or near farm houses.

The barking owl has one of the broadest diets of any Australian owl. Barking owls hunt in timbered and open habitats but usually rely on trees as hunting perches. Their diet includes prey taken from the ground, the trees,the surface of waterbodies, and directly from the air. In some locations mammals make up the majority of prey biomass with prey sizes from mice and small carnivorous marsupials up to rabbits and brushtail possums around a kilogram or more in weight. Sugar gliders are a frequent prey item. Bats of all sizes are also commonly taken.

In some areas, bird prey items make a sizeable contribution to the diet. Birds up to the size of sulphur-crested cockatoos (~800 grams) and ducks are taken, but many smaller birds are more commonly taken. One frequent prey item is the tawny frogmouth, a nocturnal bird of Australian forests and woodlands. Insect prey items can dominate the prey item count. Beetles and moths are commonly taken on the wing. A range of other insects are also consumed. Occasionally frogs, reptiles, fish or crustaceans are eaten. In summary, if an animal can be detected by a barking owl and it is of its size or smaller, it can be considered as potential prey. 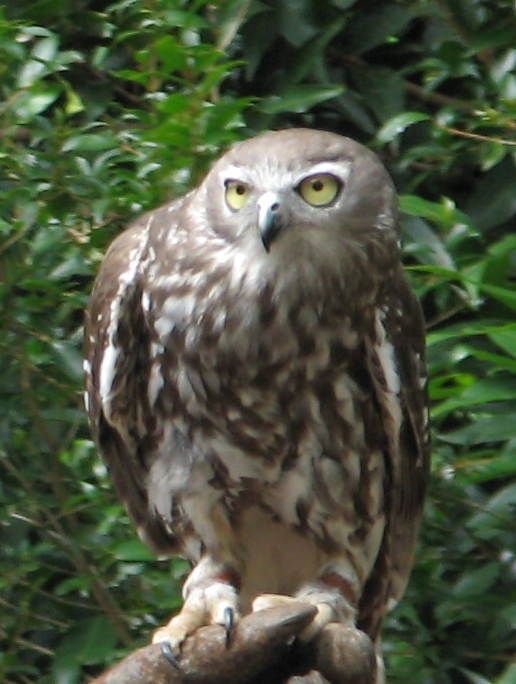 Most people hear the barking owl rather than see it as it has a loud and explosive voice. The main territorial vocalization is in the form of a double ‘hoot’, similar in pattern to the other Australian hawk owls. It sounds like a double dog bark that so closely resembles a small dog that it is difficult to tell the difference. The barking owl name is derived from these calls. Males ‘bark’ at a lower pitch than females, particularly when a pair perform the barking calls together. Barking calls can be varied in pitch and intensity depending on the purpose of the call. Loud barks are given as territorial calls and can be used in confrontations between pairs in adjacent territories. Lower pitched softer barks are often used around the nest or roost areas by the male to call the female for a meal.

Barking owls also have a range of other vocalizations. These might be described as growls, howls or screams and bleating and twittering. Growls and howls are part of a continuum of calls relating to threats, particularly during nesting. The level of the threat, typically determines the level of the call, with the lowest level being a low pitched and soft growl. This is usually a warning note to the nesting partner. This climbs into a louder and higher pitched series of howls, often made while the owl dives at the intruder. At its most extreme, this might be described as a scream. The screaming of the barking owl is said to sound like a woman or child screaming in pain. Hearings of ‘screaming lady,’ as it is so nicknamed, are rare and many only hear the sound once in their life even if they live next to a barking owl nest. While screams are usually related to nest defence, some barking owls will make this call in non-nest related situations. Myths surround the events that caused the owl to originally “mimic” the sounds.

Juvenile barking owls have a twittering, insect like call when begging for food. It is similar to that of other juvenile hawk owls.[9] Female barking owls will often make a gentle bleating sound when receiving food from the male owl. An excited variation of this sound is made during copulation.

In the early settlement of Australia a screaming noise matching the barking owl’s description was credited and told to the settlers by the Indigenous Australians or the Aboriginals as the Bunyip. The Bunyip was said to be a fearsome creature that inhabited swamps, rivers and billabongs. Bunyips had many different descriptions but most were of an animal of some sort whose favorite food was that of human women. The cries and noises coming from swamps and creeks at night were not said to be the victims but actually the noise the Bunyip made. It is believed by many that the sound is of the nocturnal barking owl and that proves the location, the noises and the rarity of the Bunyip cries. It is still not proven though that the barking owl actually started the Bunyip story and it could be caused from other sources. But it seems that the barking owl will stay as the most likely explanation. Myths surround the events that caused the owl to originally “mimic” the screaming sounds.

Scott #1623 was issued by Australia on October 1, 1997, part of a set portraying nocturnal animals. Others in the series included the spotted-tailed quoll, yellow-bellied glider, duck-billed platypus, brown antechinus, and the dingo. These were all 45-cent stamps printed by offset lithography with traditional gum (Scott #1617-1622), perforated either 14½ x 14 or 14 x 14½. A souvenir sheet was also issued, including the six stamps, perforated 14¼, and was printed with additional phosphor ink revealing a glow-in-the-dark spider and web under ultraviolet light. The stamps picturing the barking owl and the spotted-tailed quoll were also issued as self-adhesive stamps with serpentine die cuts measuring 11½ (Scott #1623-1624); these were issued in a booklet pane with five of each stamp, the liner serving as the booklet cover (Scott #1624a).

One thought on “The Barking Owl”