Robert Louis Stevenson was born at 8 Howard Place, Edinburgh, Scotland on November 13, 1850. He was a British novelist, poet, essayist, musician and travel writer. His most famous works are Treasure Island, Kidnapped, Strange Case of Dr Jekyll and Mr Hyde, and A Child’s Garden of Verses. Stevenson was a literary celebrity during his lifetime, and now ranks as the 26th most translated author in the world. His works have been admired by many other writers, including Jorge Luis Borges, Bertolt Brecht, Marcel Proust, Arthur Conan Doyle, Henry James, Cesare Pavese, Emilio Salgari, Ernest Hemingway, Rudyard Kipling, Jack London, Vladimir Nabokov, J. M. Barrie, and G. K. Chesterton, who said that Stevenson “seemed to pick the right word up on the point of his pen, like a man playing spillikins”.

He was christened Robert Lewis Balfour Stevenson. At about age 18, he changed the spelling of “Lewis” to “Louis”, and he dropped “Balfour” in 1873.

Lighthouse design was the family’s profession; Thomas’s father (Robert’s grandfather) was famous civil engineer Robert Stevenson, and Thomas’s brothers (Robert’s uncles) Alan and David were in the same field. Even Thomas’s maternal grandfather Thomas Smith had been in the same profession. However, Robert’s mother’s family were gentry, tracing their lineage back to Alexander Balfour who had held the lands of Inchyra in Fife in the fifteenth century. His mother’s father Lewis Balfour (1777–1860) was a minister of the Church of Scotland at nearby Colinton, and her siblings included physician George William Balfour and marine engineer James Balfour. Stevenson spent the greater part of his boyhood holidays in his maternal grandfather’s house. “Now I often wonder what I inherited from this old minister,” Stevenson wrote. “I must suppose, indeed, that he was fond of preaching sermons, and so am I, though I never heard it maintained that either of us loved to hear them.”

Half of Stevenson’s original manuscripts are lost, including those of Treasure Island, The Black Arrow, and The Master of Ballantrae. His heirs sold his papers during World War I, and many Stevenson documents were auctioned off in 1918.

Stevenson was a celebrity in his own time, but he was seen for much of the 20th century as a second-class writer. He became relegated to children’s literature and horror genres, condemned by literary figures such as Virginia Woolf (daughter of his early mentor Leslie Stephen) and her husband Leonard Woolf, and he was gradually excluded from the canon of literature taught in schools. His exclusion reached its nadir in the 1973 2,000-page Oxford Anthology of English Literature where he was entirely unmentioned, and The Norton Anthology of English Literature excluded him from 1968 to 2000 (1st–7th editions), including him only in the 8th edition (2006).

Strange Case of Dr Jekyll and Mr Hyde, depicted on today’s featured stamp (Great Britain Scott #1756) is a gothic novella by Stevenson, first published in 1886. It is about a London lawyer named Gabriel John Utterson who investigates strange occurrences between his old friend, Dr Henry Jekyll, and the evil Edward Hyde. The novella’s impact is such that it has become a part of the language, with the very phrase “Jekyll and Hyde” entering the vernacular to refer to people with an unpredictably dual nature: usually very good, but sometimes shockingly evil instead.

The late 20th century brought a re-evaluation of Stevenson as an artist of great range and insight, a literary theorist, an essayist and social critic, a witness to the colonial history of the Pacific Islands, and a humanist. He was praised by Roger Lancelyn Green, one of the Oxford Inklings, as a writer of a consistently high level of “literary skill or sheer imaginative power” and a pioneer of the Age of the Story Tellers along with H. Rider Haggard. He is now evaluated as a peer of authors such as Joseph Conrad (whom Stevenson influenced with his South Seas fiction) and Henry James, with new scholarly studies and organizations devoted to him. Throughout the vicissitudes of his scholarly reception, Stevenson has remained popular worldwide. According to the Index Translationum, Stevenson is ranked the 26th most translated author in the world, ahead of Oscar Wilde and Edgar Allan Poe. 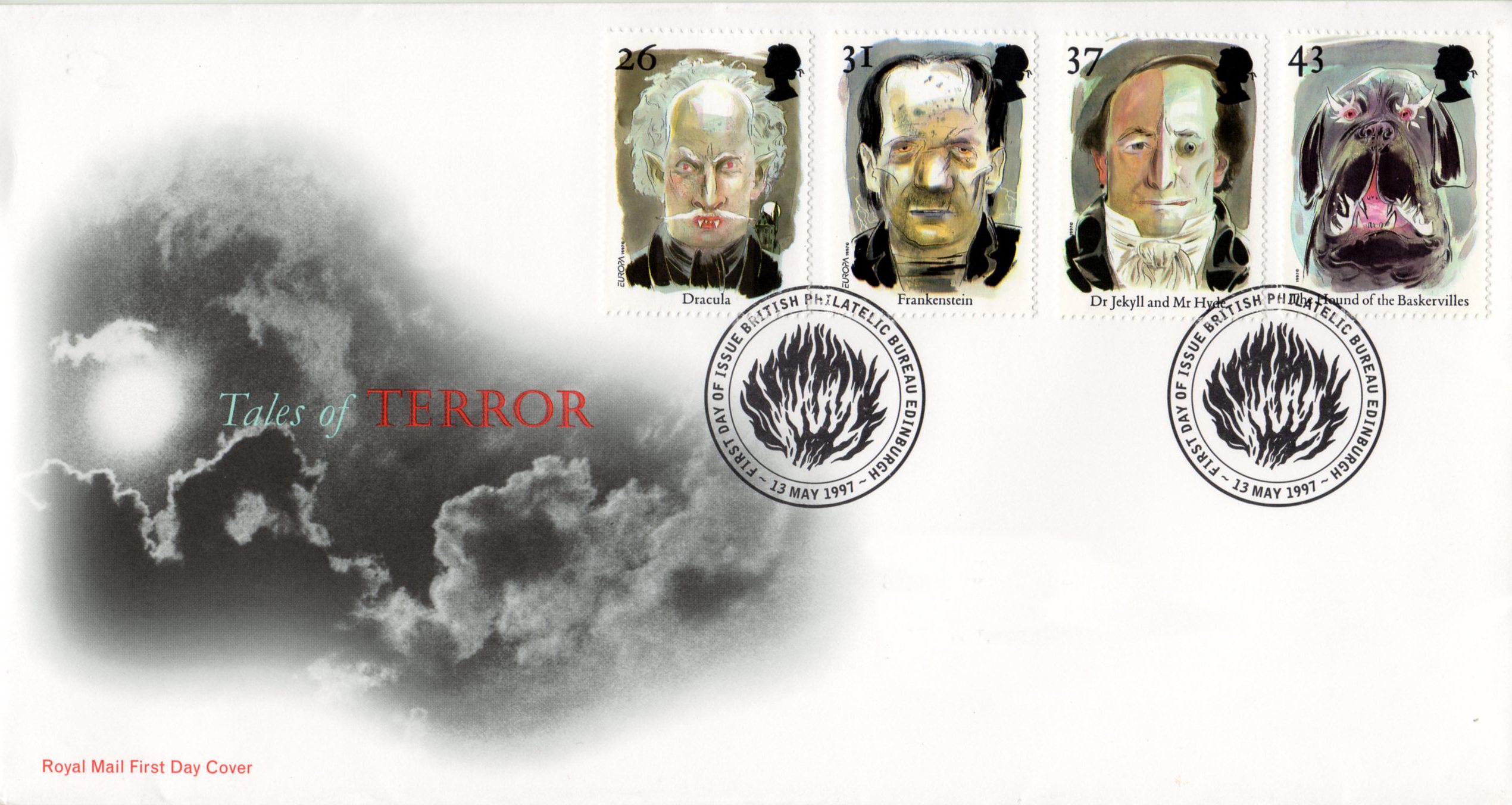 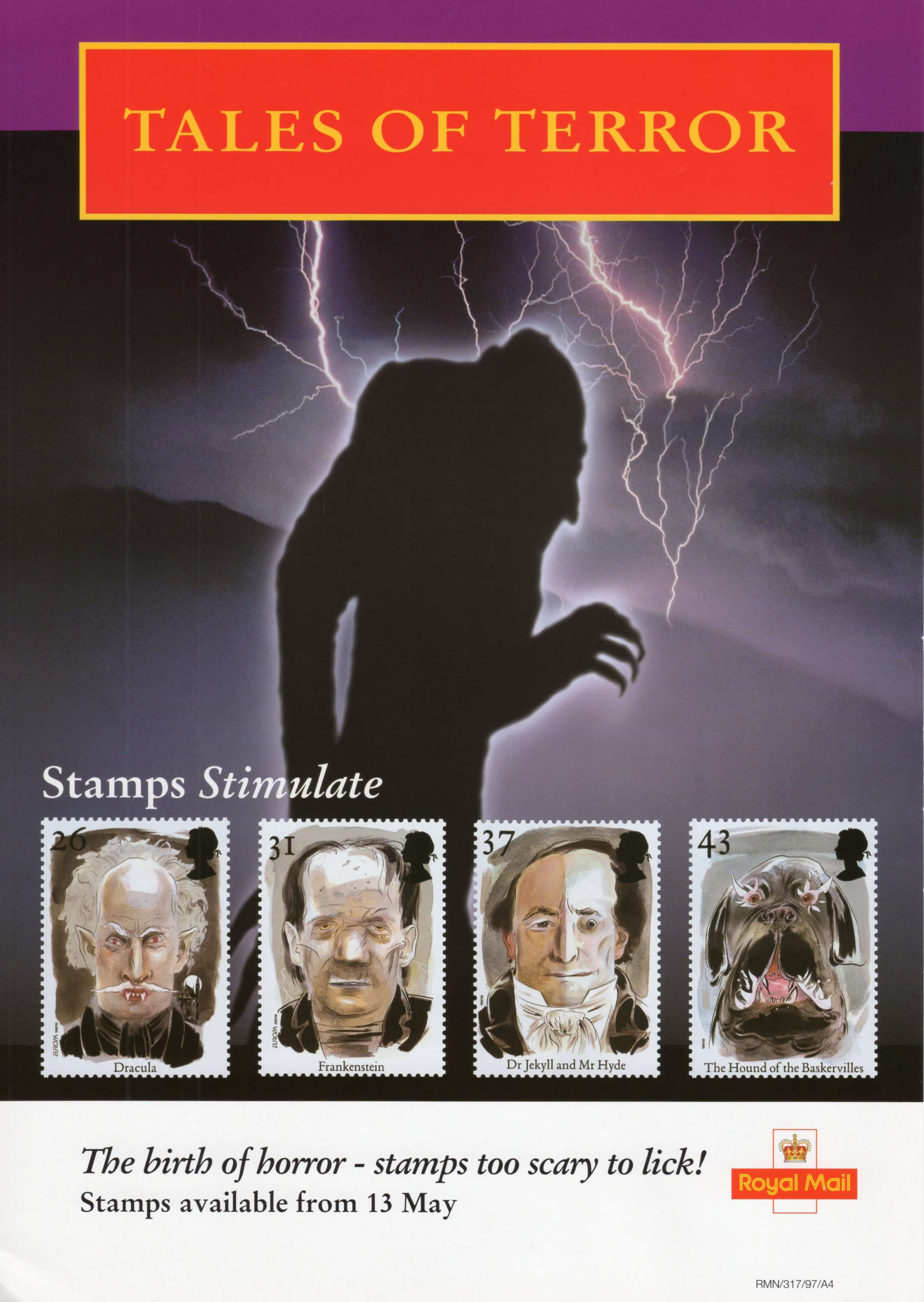 On May 13, 1997, Great Britain released a four-stamp set entitled, “Tales of Terror” (Scott #1754-1757). Designed by Ian Pollock and printed by Walsall Security Printers using the photogravure process, the stamps were sold in sheets of 100, perforated 15×14. The 26-pence denomination pictures Dracula, Frankenstein’s monster is on the 31-pence value, the 37-pence stamp features Dr. Jekyll and Mr. Hyde while the terrifying beast from The Hound of the Baskervilles appears on the 43-pence denomination. According to the insert in the official first day cover produced by Royal Mail,

The great horror stories of the nineteenth century — Mary Shelley’s Frankenstein, Robert Louis Stevenson’s Strange Case of Dr Jekyll and Mr Hyde, Bram Stoker’s Dracula and Sir Arthur Conan Doyle’s The Hound of the Baskervilles — are the most significant contribution by British writers of the last century to the mass culture of this one, and I mean mass: films, videos, toys, games, computer software, advertisements, everything from novels to breakfast cereal packets. Frankenstein’s creation and Dracula possess every high street. But their routes lie in the high culture of the Regency period. With Mary Shelley’s birth in 1797 and Dracula’s publication in 1897, these Tales of Terror are a fitting contribution to the European stamp theme of “Tales and Legends”.