Growing up, Christmas was definitely my favorite holiday but it was surpassed by American Thanksgiving once I moved away from home and family seemed to mean so much more. In Thailand, it can be very difficult to get into the holiday spirit due to the heat and the fact that Thais are only familiar with the secular aspects of the season. In my mind, Christmas Day is forever linked to the Andaman Sea tsunami and its aftermath, events that have played a big role in keeping me in Phuket all these years.

Working here in government schools, it is just another sweltering day in a long string of them, December being one of the hottest months of the year here, while preparing for mid-term exams and looking forward to two or three days off at the end of December. It was somewhat different when I taught at a private international school during the first four-and-a-half years of my new career — there was a school-wide Christmas show, in-class parties, and a two-week holiday usually starting on December 24. Nowadays, I usually don a very hot Santa Claus costume and visit kindergartens to entertain young children on the day itself (yet another unwritten duty of the deputy head teacher at my agency).

Over the past two years on A Stamp A Day, I have written several Yuletide-themed articles featuring my first and second favorite holiday stamps, the first mention of “Xmas” on a stamp, an account of my favorite Christmas hymn — “Silent Night” — which is actually 200 years old this year, and several others. I put together a series of articles for my Asian Meanderings blog in both 2013 and 2014 covering “12 Days of Christmas Stamps“. For 2018, I have decided to devote nearly the entire month of December to seasonal-themed stamps. After spending most of the month of November working in the provincial capital of Phang Nga, I was heartened that my return to Phuket coincided with the Christmas decorations being installed at the local shopping centers.  I want to make this my most “Christmasy” year yet in the Land of Smiles.

“They’re as much a part of the Christmas season as carols, fragrant pines and the joyous exchange of gifts between friends and families. In fact, Christmas lights have become such an integral part of seasonal traditions in North America that it’s hard to envision a time when neither electricity nor colourful, sparkling Christmas lights existed. But it’s been just over a century since electric lights were first used to decorate trees and barely seventy years since decorative outdoor Christmas lights gained popularity. On November 1, 2001, Canada Post will issue three Christmas stamps featuring Christmas lights: one domestic rate ($0.47), one US rate ($0.60), and one international rate ($1.05). “

“The challenge facing designers ‘Segun Olude, Carisa Romans and Robert L. Peters was that of portraying the ‘feeling’ of lights. Photography provided the solution, as its very essence is the presence and capture of light. Several photographers provided images of Christmas lights and nostalgic winter scenes, from which various elements and details were selected, scanned, and digitally re-combined. Through photographic montages, the magic and beauty of three distinctly Canadian winter wonderland scenes — a sleigh ride in an urban landscape, skating in the suburbs, and building a snowman in the country — are brought to life with the introduction of lights. The scenes and colours of all three stamps were specifically chosen to enhance the Christmas cards and packages which the stamps will grace. All three designs are available in panes of 25. The international rate and U.S. rate stamps are available in booklets of six stamps, and the domestic rate stamp is available in booklets of ten.”

A sled, sledge, or sleigh is a land vehicle with smooth underside or possessing a separate body supported by two or more smooth, relatively narrow, longitudinal runners that travels by sliding across a surface. Most commonly sleighs are used on snow or ice, but in certain cases they may be used on any surfaces, especially on ones with relatively low friction, such as sand or wet grass. Snow sleighs are usally used in ice because it reduces thew amount of friction which helps to carry heavy loads. They may be used to transport passengers, cargo, or both. Shades of meaning differentiating the three terms often reflect regional variations depending on historical uses and prevailing climate. 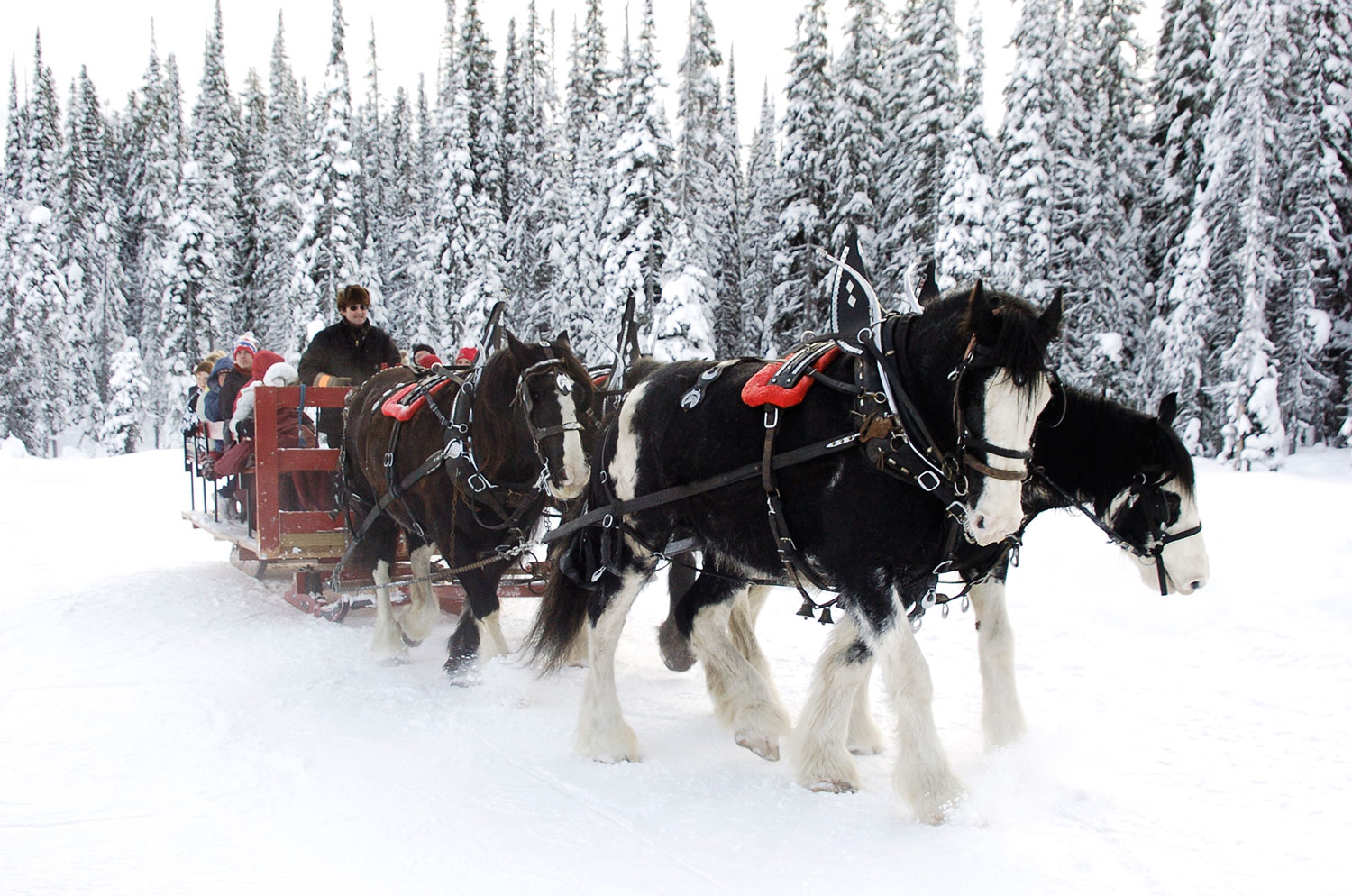 In Britain sledge is the general term, and more common than sled. Toboggan is sometimes used synonymously with sledge but more often to refer to a particular type of sledge without runners. Sleigh refers to a moderate to large-sized, usually open-topped vehicle to carry passengers or goods, and typically drawn by horses, dogs, or reindeer.

In American usage, sled remains the general term but often implies a smaller device, often for recreational use. Sledge implies a heavier sled used for moving freight or massive objects (“stone boat”). Sleigh refers more specifically than in Britain to a vehicle which is essentially a cold-season alternative to a carriage or wagon and has seating for passengers; what can be called a dog-sleigh in Britain is known only as a dog-sled in North America.

In Australia, where there is limited snow, sleigh and sledge are given equal preference in local parlance

One thought on “A Month of Christmas: Horse-Drawn Sleigh”