A Christmas carol (also called a noël, from the French word meaning “Christmas”) is a carol (song or hymn) whose lyrics are on the theme of Christmas, and which is traditionally sung on Christmas itself or during the surrounding holiday season. Christmas carols may be regarded as a subset of the broader category of Christmas music.

The first known Christmas hymns may be traced to 4th-century Rome. Latin hymns such as Veni redemptor gentium, written by Ambrose, Archbishop of Milan, were austere statements of the theological doctrine of the Incarnation in opposition to Arianism. Corde natus ex Parentis (Of the Father’s heart begotten) by the Spanish poet Prudentius (d. 413) is still sung in some churches today.

In the 9th and 10th centuries, the Christmas “Sequence” or “Prose” was introduced in Northern European monasteries, developing under Bernard of Clairvaux into a sequence of rhymed stanzas. In the 12th century the Parisian monk Adam of Saint Victor began to derive music from popular songs, introducing something closer to the traditional Christmas carol.

In the 13th century, in France, Germany, and particularly, Italy, under the influence of Francis of Assisi a strong tradition of popular Christmas songs in regional native languages developed. Christmas carols in English first appear in a 1426 work of John Awdlay, a Shropshire chaplain, who lists twenty five “caroles of Cristemas”, probably sung by groups of ‘wassailers’, who went from house to house. The songs we know specifically as carols were originally communal songs sung during celebrations like harvest tide as well as Christmas. It was only later that carols began to be sung in church, and to be specifically associated with Christmas.

Many carols which have gained popularity today were printed in Piae Cantiones, a collection of late medieval Latin songs which was first published in 1582. Early, Latin forms of carols such as “Christ was born on Christmas Day”, “Good Christian Men, Rejoice” and “Good King Wenceslas” can be found in this book. “Adeste Fideles” (“O Come all ye faithful”) appears in its current form in the mid-18th century, although the words may have originated in the 13th century. The origin of the tune is disputed.

Carols gained in popularity after the Reformation in the countries where Protestant churches gained prominence (as well-known Reformers like Martin Luther authored carols and encouraged their use in worship). This was a consequence of the fact that the Lutheran reformation warmly welcomed music. 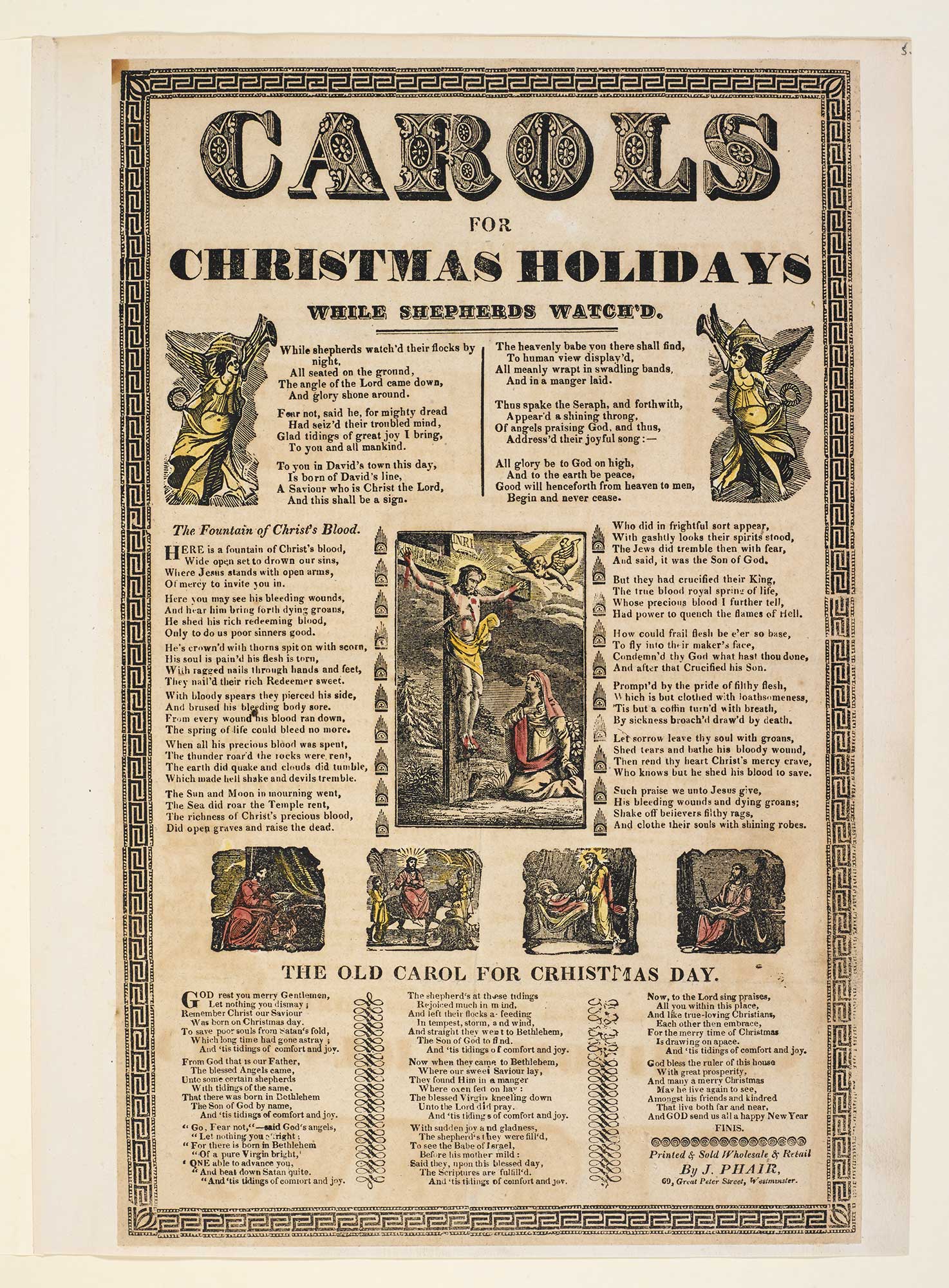 The publication of Christmas music books in the 19th century helped to widen the popular appeal of carols. The first appearance in print of “God Rest Ye Merry, Gentlemen”, “The First Noel”, “I Saw Three Ships” and “Hark! The Herald Angels Sing” was in Christmas Carols Ancient and Modern (1833) by William Sandys. Composers like Arthur Sullivan helped to repopularize the carol, and it is this period that gave rise to such favorites as “Good King Wenceslas” and “It Came Upon the Midnight Clear”, a New England carol written by Edmund H. Sears and Richard S. Willis.

The publication in 1871 of Christmas Carols, New and Old by Henry Ramsden Bramley and Sir John Stainer was a significant contribution to a revival of carols in Victorian Britain. In 1916, Charles Lewis Hutchins published Carols Old and Carols New, a scholarly collection which suffered from a short print run and is consequently rarely available today. The Oxford Book of Carols, first published in 1928 by Oxford University Press (OUP), was a notably successful collection; edited by the British composers Martin Shaw and Ralph Vaughan Williams, along with clergyman and author Percy Dearmer, it became a widely used source of carols in among choirs and church congregations in Britain and remains in print today.

The singing of carols was further popularized in the 20th century when OUP published one of the most popular carol books in the English-speaking world, Carols for Choirs. First published in 1961 and edited by David Willcocks and Reginald Jacques, this bestselling series has since expanded to a five-volume set. Along with editor John Rutter, the compilers included many arrangements of carols derived from sources such as Piae Cantiones, as well as pieces by modern composers such as William Walton, Benjamin Britten, Richard Rodney Bennett, William Mathias and John Rutter.

Today carols are regularly sung at Christian religious services. Some compositions have words that are clearly not of a religious theme, but are often still referred to as “carols”. For example, the 16th-century song “A Bone, God Wot!” appears to be a wassailing song (which is sung during drinking or while requesting ale), but is described in the British Library’s Cottonian Collection as a Christmas carol. As recently as 1865, Christmas-related lyrics were adopted for the traditional English folk song Greensleeves, becoming the internationally popular Christmas carol “What Child is This?”. Little research has been conducted on carol singing, but one of the few sociological studies of caroling in the early 21st century in Finland determined that the sources of songs are often misunderstood, and that it is simplistic to suggest caroling is mostly related to Christian beliefs, for it also reinforces preservation of diverse national customs and local family traditions.

A modern form of the practice of caroling can be seen in “Dial-A-Carol,” an annual tradition held by students at the University of Illinois at Urbana-Champaign, wherein potential audiences call the singers to request a performance over phone call.

It is not clear whether the word carol derives from the French carole or the Latin carula meaning a circular dance. In any case, the dancing seems to have been abandoned quite early. The typical 3/4 (waltz) time would tend to support the latter meaning.

Traditionally, carols have often been based on medieval chord patterns, and it is this that gives them their uniquely characteristic musical sound. Some carols like “Personent hodie”, “Good King Wenceslas”, and “The Holly and the Ivy” can be traced directly back to the Middle Ages, and are among the oldest musical compositions still regularly sung.

Compositions continue to be written that become popular carols. For example, many of the carols written by Alfred Burt are sung regularly in both sacred and secular settings, and are among the better known modern Christmas carols.

Almost all the well-known carols were not sung in church until the second half of the 19th century. Hymns Ancient and Modern 1861–1874 included several carols. Isaac Watts, the “father of English hymnody”, composed “Joy to the World”, which has become a popular Christmas carol even though it is widely believed that Watts did not write it to be sung only at Christmas.

Charles Wesley wrote texts for at least three Christmas carols, of which the best known was originally entitled “Hark! How All the Welkin Rings”, later edited to “Hark! the Herald Angels Sing”. A tune from a cantata, Festgesang, by Felix Mendelssohn in 1840 was adapted by William H. Cummings to fit Wesley’s words. This combination first appeared in Hymns Ancient and Modern in 1861.[citation needed]

“Silent Night” comes from Austria. The carol was first performed in the Nikolaus-Kirche (Church of St. Nicholas) in Oberndorf, Austria on December 24, 1818. Mohr had composed the words much earlier, in 1816, but on Christmas Eve brought them to Gruber and asked him to compose a melody and guitar accompaniment for the church service. The first English translation was in 1871 where it was published in a Methodist hymnal.

Nineteenth-century antiquarians rediscovered early carols in museums. According to the Encyclopædia Britannica, about 500 have been found. Some are wassailing songs, some are religious songs in English, some are in Latin, and some are “macaronic” — a mixture of English and Latin. Since most people did not understand Latin, the implication is that these songs were composed for church choristers, or perhaps for an educated audience at the Royal courts. The most famous survival of these early macaronic carols is “The Boar’s Head”.

The tradition of singing carols outside of church services early in the nineteenth century is best illustrated by Thomas Hardy’s novel Under the Greenwood Tree (1872). In England and other countries, such as Poland (kolęda), Romania (colinde) and Bulgaria (koledari), there is a tradition of Christmas caroling in which groups of singers travel from house to house, singing carols at each, for which they are often rewarded with gifts, money, mince pies, or a glass of an appropriate beverage. Money collected in this way is now normally given to charity.

Singing carols in church was instituted on Christmas Eve 1880 in Truro Cathedral, Cornwall, and now seen in churches all over the world. The songs that were chosen for singing in church omitted the wassailing carols, and the words “hymn” and “carol” were used almost interchangeably. Shortly before, in 1878, the Salvation Army, under Charles Fry, instituted the idea of playing carols at Christmas, using a brass band. Carols can be sung by individual singers, but are also often sung by larger groups, including professionally trained choirs. Most churches have special services at which carols are sung, generally combined with readings from scripture about the birth of Christ; this is often based on the famous Festival of Nine Lessons and Carols at King’s College, Cambridge.

Christmas music performed in the United States ranges from popular songs, such as “Jingle Bells”, to Christmas carols, such as “Away in a Manger”, “O Little Town of Bethlehem”, and numerous others of varying genres. Church and college choirs celebrate with special programs and online recordings.

On November 22, 1978, Great Britain released four Christmas stamps portraying Victorian caroling. These were designed by Faith Jaques and printed by Harrison and Sons Ltd. using the photogravure method, perforated 15 x 14. The 7-pence denomination (Scott #847) depicts carolers singing around a Christmas tree while the 8-pence stamp (Scott #848) portrays the Christmas waits, an ensemble that derived from horn-blowing watchmen. Carolers from the 18th century are shown on the 11-pence value (Scott #849), while the 13-pence denomination (Scott #850) pictures the Boar’s Head Carol.