A wreath is an assortment of flowers, leaves, fruits, twigs, or various materials that is constructed to form a ring. The word wreath comes from Middle English wrethe and from Old English writha, band. In English-speaking countries, wreaths are used typically as household ornaments, most commonly as an Advent and Christmas decoration. They are also used in ceremonial events in many cultures around the globe. They can be worn as a chaplet around the head, or as a garland around the neck. Wreaths have much history and symbolism associated with them. They are usually made from evergreens and symbolize strength, as evergreens last even throughout the harshest winters. Bay laurel may also be used; bay laurel wreaths are known as laurel wreaths.

Wreaths were a design used in ancient times in southern Europe. The most well-known are pieces of Etruscan civilization jewelry, made of gold or other precious metals. Symbols from Greek myths often appear in the designs, embossed in precious metal at the ends of the wreath. Ancient Roman writers referred to Etruscan corona sutilis, which were wreaths with their leaves sewn onto a background. These wreaths resemble a diadem, with thin metal leaves being attached to an ornamental band. Wreaths also appear stamped into Etruscan medallions. The plants shown making the wreaths in Etruscan jewelry include ivy, oak, olive leaves, myrtle, laurel, wheat and vines.

Wreaths were worn as crowns by Etruscan rulers. The Etruscan symbolism continued to be used in Ancient Greece and Rome. Roman magistrates also wore golden wreaths as crowns, as a symbolic testament to their lineage back to Rome’s early Etruscan rulers. Roman magistrates also used several other prominent Etruscan symbols in addition to a golden wreath crown: fasces, a curule chair, a purple toga, and an ivory rod.

In the Greco-Roman world, wreaths were used as an adornment that could represent a person’s occupation, rank, their achievements and status. The wreath that was commonly used was the laurel wreath. The use of this wreath comes from the Greek myth involving Apollo, Zeus’ son and the god of life and light, who fell in love with the nymph Daphne. When he pursued her she fled and asked the river god Peneus to help her. Peneus turned her into a laurel tree. From that day, Apollo wore a wreath of laurel on his head. Laurel wreaths became associated with what Apollo embodied; victory, achievement and status and would later become one of the most commonly used symbols to address achievement throughout Greece and Rome. Laurel wreaths were used to crown victorious athletes at the original Olympic Games and are still worn in Italy by university students who just graduated.

Other types of plants used to make wreath crowns also had symbolic meaning. For example, oak leaves symbolized wisdom, and were associated with Zeus, who according to Greek mythology made his decisions while resting in an oak grove. The Twelve Tables, dating to 450 BC, refer to funeral wreaths as a long-standing tradition. Harvest wreaths, a common household decoration today, are a custom with ancient roots in Europe. The creation of harvest wreaths in Europe can be traced back to ancient times, and is associated with animistic spiritual beliefs. In Ancient Greece, the harvest wreath was a sacred amulet, using wheat or other harvested plants, woven together with red and white wool thread. The harvest wreath would be hung by the door year-round.

Harvest wreaths were an important symbol to the community in Ancient Greece, not merely to the farmer and his family. The festivals devoted to Dionysus, the Oschophoria and Anthesteria, included a ritual procession called the eiresîonê. A harvest wreath was carried to Pyanopsia and Thargelia by young boys, who would sing during the journey. The laurel or olive wreath would be hung at the door, and then offerings were made to Helios and the Hours. It was hoped that this ritual would bring protection against crop failure and plagues.

In Poland, the harvest wreath (wieniec) is a central symbol of the Harvest Festival, Dozynki. Wreaths are made of different shapes and sizes, using harvested grain plants, fruit and nuts. The wreath is then brought to a church for a blessing by a priest. The tradition includes a procession to the family home from the church, with a girl or young woman leading the procession and carrying the wreath. The procession is followed with a celebration and feast.[11] Ukraine, Hungary, and other Eastern Europe cultures also have similar rituals that began as part of pre-Christian culture. 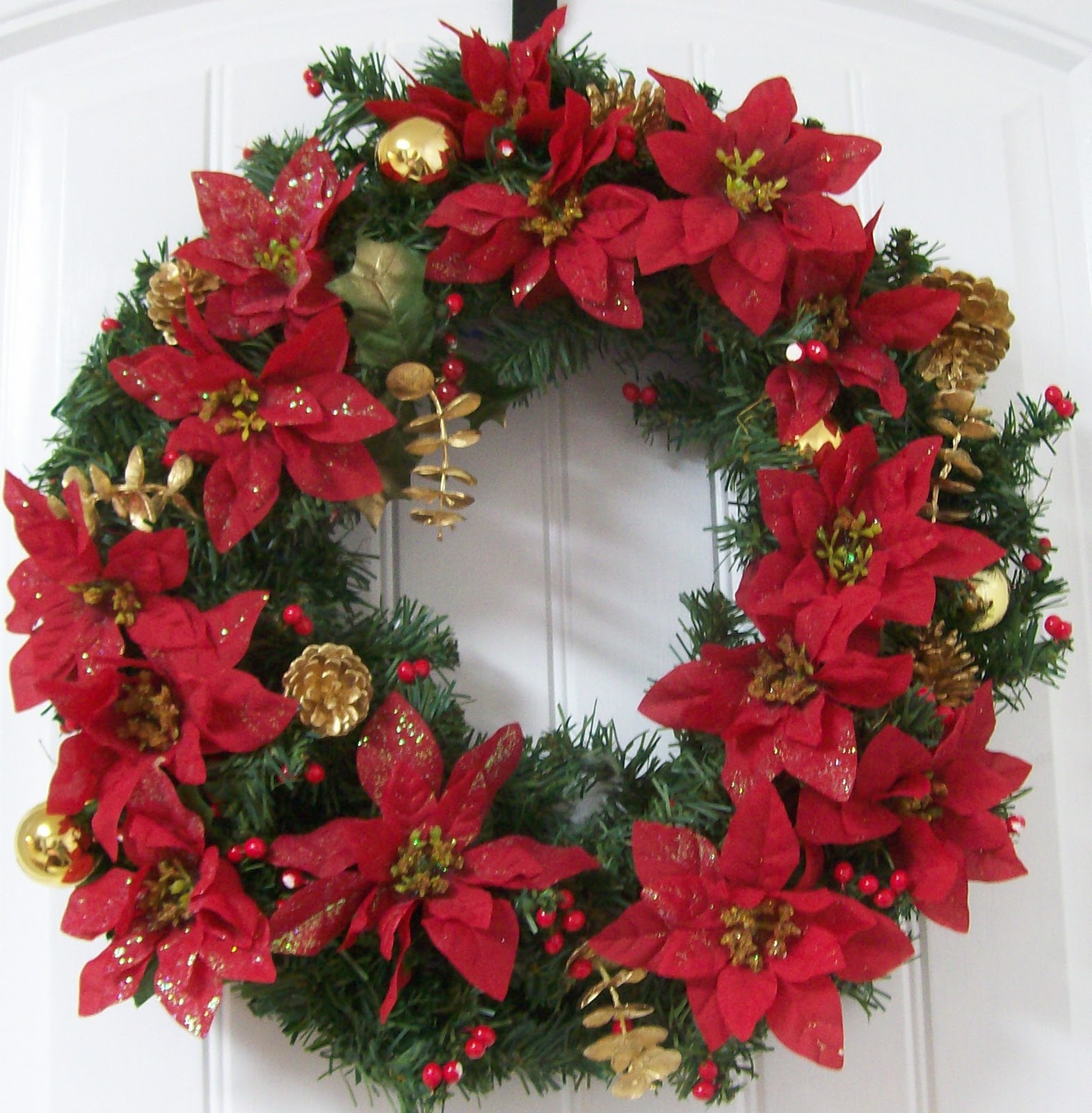 In Christianity, wreaths are used to observe the Advent season, in preparation for Christmastide and Epiphanytide, as well as to celebrate the latter two liturgical seasons. These wreaths, as with other Advent and Christmas decorations, are often set up on the first Sunday of Advent, a custom that is sometimes done liturgically, through a hanging of the greens ceremony. The Advent wreath was first used by Lutherans in Germany in the 16th century, and in 1839, Lutheran priest Johann Hinrich Wichern used a wreath made from a cart wheel to educate children about the meaning and purpose of Christmas, as well as to help them count its approach, thus giving rise to the modern version of the Advent wreath. For every Sunday of Advent, starting with the fourth Sunday before Christmas, he would put a white candle in the wreath and for every day in between he would use a red candle. The use of the Advent wreath has since spread from the Lutheran Church to many Christian denominations, and some of these traditions, such as the Catholic Church and Moravian Church, have introduced unique variations to it.

All of the Advent wreaths have four candles, and many of them have a white candle in the center, the Christ candle, which is lit on Christmas Day. Advent and Christmas wreaths are constructed of evergreens to represent everlasting life brought through Jesus and the circular shape of the wreath represents God, with no beginning and no end. Advent and Christmas wreaths are now a popular symbol in preparation for and to celebrate the coming of Christ, with the former being used to mark the beginning of the Christian Church’s liturgical year and both serving as decor during Advent and Christmas festivities. While Advent wreaths are erected on stands or placed on tables, Christmas wreaths are often hung on doors or walls. Within Advent, the Church observes Saint Lucy’s Day, the memorial of Saint Lucy, who is said to have brought “food and aid to Christians hiding in the catacombs” using a candle-lit wreath to “light her way and leave her hands free to carry as much food as possible”; as such, on this day, many young Christian girls dress as Saint Lucy, wearing a wreath on their head.

On November 5, 2001, the Isle of Man Post Office released a set of five Christmas stamps depicting “flower ornaments” (Scott #935-939). These were printed by the House of Questa Ltd. using offset lithography, perforated 14 x 14½. Each had an attached tab with a different quotation in both English and Manx. The 25-pence value featuring a wreath had a tab which read Health and Happiness / Slaynt as Maynrys.

Christmas Eve on the Isle of Man was traditionally a time for Islanders to visit the parish church for prayers. After midnight, the vicar would depart and leave the clerk in charge, at which point the men in the congregation would sing carvals. Largely un-associated with the Nativity or English carols, carvals are religious songs of inordinate length, some as many as forty verses, and as the night wore on the girls would become restless and throw dried peas at the singers. Towards the end of the festive period, comes the Eve of the Feast of Mary or Oie’ll Verree, which has survived in different forms in the rural districts.