As I write this, it’s almost 8:00 p.m. Christmas Eve here in Thailand and Santa Claus has already begun his long series of flights delivering gifts to all of the good boys and girls in every corner of the world. This journey, via his technologically-advanced sleigh pulled by a total of nine reindeer (including the famous guide, Rudolph) will cover an estimated  316,899,308 miles (510,000,000 km) traveling at the unbelievable speed of 1,800 miles per second. Due to the speed at which Santa travels, normal radar is unable to track him at all. However, the United States military has this ability through its North American Aerospace Defense Command (NORAD). Each year about 1,500 military personnel and volunteers at an Air Force base in Colorado work hard on Christmas Eve tracking Santa Claus and answering  phone calls about his current location. Providing information on Santa’s whereabouts every year since 1955, the good news is that NORAD is set to provide the service again in 2018, despite the current shutdown on the U.S. government. The tracker is also available online.

To ascertain all those on his “nice” list will be able to open their gifts on the morning of Christmas Day, Santa needs to visit 390,000 homes per minute — or 6,424 per second. During his time, he needs to find entry into those houses; in cold weather climates, this is most often via the chimney leading to a (hopefully) unlit fireplace but in warm areas such as Thailand, Santa most often comes through an open window. All that flying and rapidly placing presents under the trees really builds up an appetite. His favorites are the traditional milk and cookies (I’m told that he likes homemade chocolate chip cookies most of all) but in recent years replacements have included alcoholic beverages such as sherry, mulled wine and beer (he saves these to give to the elves back at the North Pole as Santa avoids drinking and driving). Alternatives to the cookies often include mince pies, gingerbread men and fruit cake, Santa won’t be short of energy during his journey, consuming a total of 71,764,000,000 calories.

Santa Claus, remember, does all this in one night — Christmas Eve — launching from his homebase and workshop at the North Pole on a flight path to the South Pacific Ocean. His first delivery is to the Republic of Kiribati, a collection of 32 atolls with a total land area of 310 square miles (800 square kilometers) dispersed over 1.3 million square miles (3.5 million km²) of ocean. Their spread straddles both the equator and the 180th meridian, although the International Date Line goes round Kiribati and swings far to the east, almost reaching the 150°W meridian. Kiribati’s easternmost islands, the southern Line Islands, south of Hawaii, have the most advanced time on Earth: UTC+14 hours. When I inherited my mom’s childhood stamp collection, there were several issues under the British colonial name of the Gilbert and Ellice Islands. Kiribati gained its independence from the United Kingdom on July 12, 1979.

He will next travel west, delivering presents to those on even more tiny South Pacific islands and also hitting the Philippines, New Zealand and Australia, followed by Japan with its very small Christian population. Santa will then make numerous visits all across Asia (including both Koreas and Thailand with their predominant Buddhist populations as well as Malaysia and Indonesia with their large Muslim populations), cross the Himalayan ranges hitting the “‘Stans” before dipping down to India, crossing to the Arabian Peninsula, exploring Africa from north to south and east to west, before crossing the Mediterranean into Western Europe. The conclusion of the journey is a north to south journey in the Western Hemisphere beginning with the midnight Sun of northeastern Canada, south to the United States, México and South America. From the Falkland Islands and South Georgia, Santa then continues unhindered back to the West Coast of North America and zig-zagging across Alaska, visiting Nome before the far western reaches of the Aleutians. Hawaii and a few other islands are usually saved for last so Santa can refresh his surfing skills before heading back to the North Pole where he and the elves immediately begin planning for the next year’s Christmas season while the reindeer begin their well-deserved year-long rest period.

There has long been speculation about how Santa’s sleigh can achieve such speeds while never straying from course or being involved in an accident or breakdown (not even a single near-miss collision). While the basic design is similar to that of the one-horse open sleigh which stars in “Jingle Bells” and described in the first article of this Month of Christmas, the charming appearance disguises many advances in technology. As seen in the above image created by HOW STUFF WORKS, main propulsion is provided by a combination of stardust with an antimatter reactor and the traditional reindeer  who are taken care of with a built-in “fuel” compartment for Donner, Blitzen, Rudolph and the others). As seen in the 2003 film Elf, this is due to an overall reduction in Christmas spirit which provides the lift the reindeer require to achieve flight.

Further sleigh equipment includes a GPS navigator programmed by the elves so that Santa’s route can be mapped-out prior to starting his journey. This ascertains that he doesn’t miss anybody and is constantly updated by a custom “Naughty-or-Nice” sensor so if a child’s activities turns to the bad side right before he arrives, Santa can select a piece of coal to put in that child’s stocking rather than leaving a gift during the visit. An autopilot system is built-in, although Santa enjoys driving more than resting. Other safety features include a blind spot monitoring system so that he can remain hidden from aircraft and birds and rear-view and thermal imaging cameras to avoid obstacles from all directions.

Communications is provided by satellite radio and backup systems provided using Android and Apple applications. Comfort features include heated seats and steering wheel as well as a hot cocoa dispenser. It has been theorized that the speed of the sleigh traveling through the atmosphere actually creates a North Pole micro-climate bubble so that Santa doesn’t have to remove his heavy red suit, gloves, etc. when his journey takes him into warmer environments. Perhaps the most mysterious of all the sleigh’s features is Santa’s toy bag (occasionally referred to as a “transdimensional present compartment”). Some sources claim that this acts as a portal between the sleigh and the workshop at the North Pole. Under this theory, the elves constantly resupply the gifts in the “bag” with those matching requests on the wishlists received by Santa over the annual letter-writing period or as reported by his various agents manning the “Christmas grottoes” in department stores and shopping malls around the world. Another report suggests that Santa may have harnessed the power of nanotechnology and found a way to miniaturize millions of presents into one large bag.

While Santa Claus is flying high above the ground, landing to make his quick visits delivering wrapped gifts or lumps of coal, and eating a huge amount of snacks along the way, down here on the Earth, we are celebrating Christmas Eve in a huge variety of different traditional and modern ways. Depending on the country or culture, Christmas Eve — December 24 — may refer to just the evening or the entire day before Christmas Day, the festival commemorating the birth of Jesus Christ. Christmas Eve is widely observed as a full or partial holiday in anticipation of Christmas Day. Together, both days are considered one of the most culturally significant celebrations in Christendom and Western society.

Christmas celebrations in the denominations of Western Christianity have long begun on the night of the 24th, due in part to the Christian liturgical day starting at sunset, a practice inherited from Jewish tradition and based on the story of Creation in the Book of Genesis: “And there was evening, and there was morning — the first day.” Many churches still ring their church bells and hold prayers in the evening; for example, the Nordic Lutheran churches. Since tradition holds that Jesus was born at night (based in Luke 2:6-8), Midnight Mass is celebrated on Christmas Eve, traditionally at midnight, in commemoration of his birth. The idea of Jesus being born at night is reflected in the fact that Christmas Eve is referred to as Heilige Nacht (Holy Night) in German, Noche buena (the Good Night) in Spanish and similarly in other expressions of Christmas spirituality, such as the song “Silent Night, Holy Night”.

Many other varying cultural traditions and experiences are also associated with Christmas Eve around the world, including the gathering of family and friends, the singing of Christmas carols, the illumination and enjoyment of Christmas lights, trees, and other decorations, the wrapping, exchange and opening of gifts, and general preparation for Christmas Day. Legendary Christmas gift-bearing figures including Santa Claus, Father Christmas, Christkind, and Saint Nicholas are also often said to depart for their annual journey to deliver presents to children around the world on Christmas Eve, although until the Protestant introduction of Christkind in 16th-century Europe, such figures were said to instead deliver presents on the eve of Saint Nicholas’ feast day (December 6).

Among Christians, as well as non-Christians who celebrate Christmas, the significant amount of vacation travel, and travel back to family homes, that takes place in the lead-up to Christmas means that Christmas Eve is also frequently a time of social events and parties, worldwide. In my family, I don’t recall ever attending a Midnight Mass while growing up although there have been times since moving to Thailand that I have sought out one on Christmas Eve. One year, I arrived at this town’s small wooden Catholic church to find a huge overflow crowd with the doors and windows thrown open so all could here the service in Thai. Another year, the Mass was in Tagalog for the large Filipino expatriate community. As for my childhood, I don’t recall the Christmas Eve meal at all — it may have been the huge turkey dinner or we might have had that on Christmas Day. I do remember that, when we were teenagers, my sister and I were each allowed to open one gift on Christmas Eve and the remainder the following morning (when we would wake up early and then struggle to pull our parents out of bed; my dad used to comically prolong getting his first cup of coffee before we could commence passing out the gifts and open then one at a time, in order from youngest to oldest family member).

On November 2, 2018, Deutsche Post of Germany released religious and secular Christmas stamps in both traditional gum and self-adhesive formats. The religious stamps feature a Madonna and Child image from a stained glass window. These have a denomination of 70 + 30 euro cents and were printed using offset lithography. The traditional gum version was printed in sheets of 10, perforated 14 (Michel #3418) while the self-adhesive stamps were issued in booklets of 10 with die-cut perforations of 10¼ (Michel #3422). The secular stamps portray “Santa’s Sleigh Over City” (Weihnachtsmann über der Stadt). Michel #3421 is a 70-euro cent traditional gum stamp printed using offset lithography, comb-perforated 14, issued in sheets of 10. The self-adhesive variety is quite a bit smaller (measuring 39 x 22.5 mm compared to the larger stamp’s 44.5 x 26.5 mm) and has die-cut perforations of 9¾ x 10). Michel #3423 was released in booklet panes of 10 stamps. 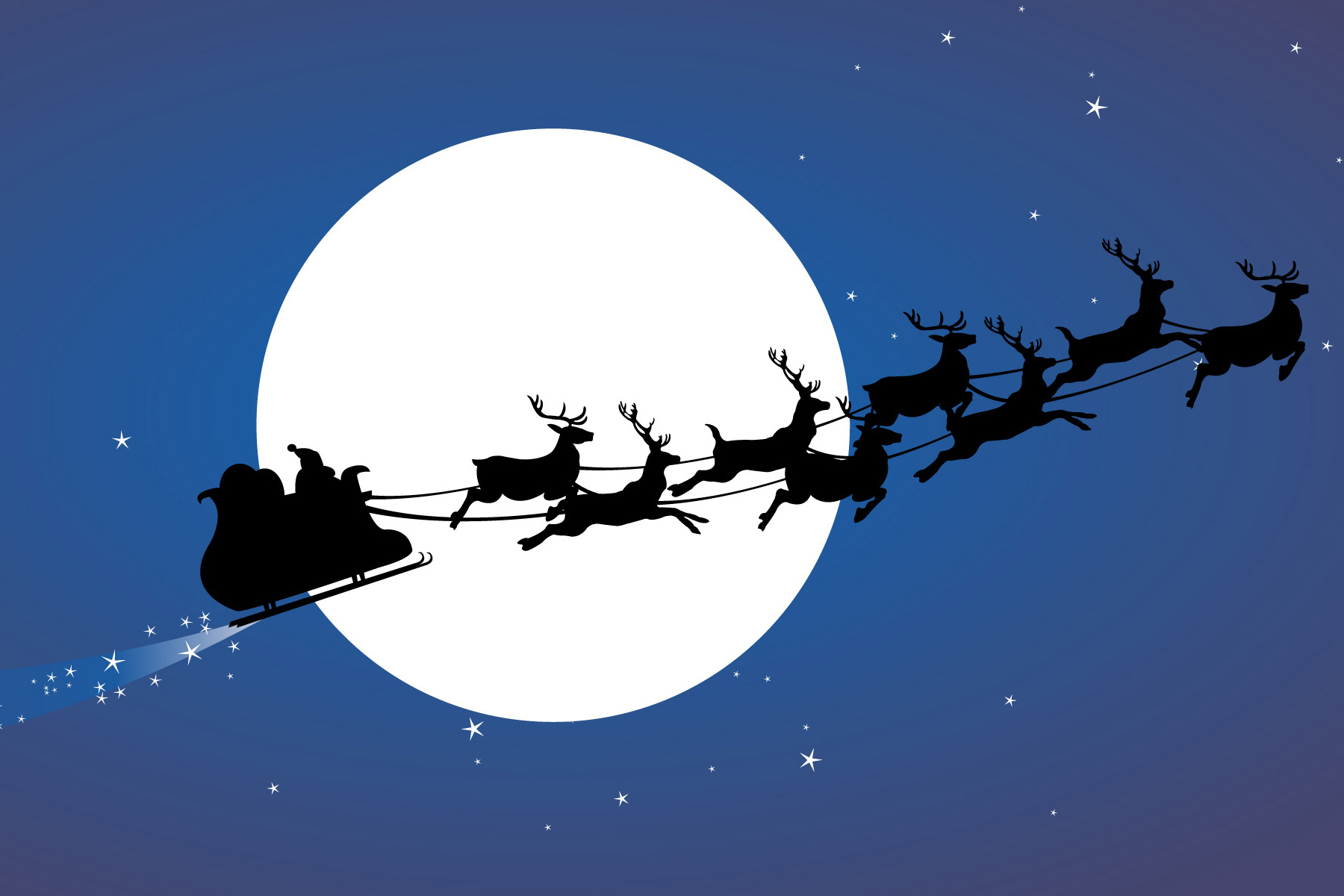 One thought on “A Month of Christmas: Santa’s Around-the-World Journey by Sleigh on Christmas Eve”