There are a number of topics to choose from for December 26 articles. In 2016 and 2017, I chose to write about the Andaman Sea tsunami that affected so many people here (forever changing my life as well) and elsewhere. While I do have a number of stamps (and postal history items) related to this natural disaster, I have enjoyed the positive nature of the “A Month Of Christmas” articles that I really don’t want to write something that evokes such sad emotions. The date is also observed as Boxing Day in the United Kingdom and other current and former Commonwealth nations as well as a Christian saint’s day to commemorate Saint Stephen, the first Christian martyr. It is also one of two dates (the other being New Year’s Day, January 1), on which the Junkanoo street parade takes place with music, dance, and costumes of Akan origin on many islands across the Bahamas. It is a colorful event with dances choreographed to the beat of goatskin drums and cowbells. There are also Junkanoo parades held in Miami in June and Key West in October, where local black American populations have their roots in The Bahamas. In Ireland, December 26 is celebrated as Wren Day and in Cornwll it’s Mummer’s Day which was originally part of the pagan heritage of midwinter celebrations that were regularly celebrated throughout the region where people would take part in the traditional custom of guise dancing, which involves disguising themselves by painting their faces black or wearing masks. It is also a Slovenian national holiday called Dan samostojnosti in enotnosti (Independence and Unity Day) that commemorates the official proclamation of the Slovenian independence referendum on December 26, 1990. There are a number of anniversaries of other events occurring on this date as well. Unfortunately, I don’t have appropriate stamps for any of these…yet.

However, I just received a few copies of the new Kwanzaa stamp issued by the United States earlier this year. This is another topic that I knew nothing at all about other than it occurs during Christmastime and is celebrated by African Americans. In fact, it is a celebration held in the United States and in other nations of the African diaspora in the Americas and lasts a week, honoring African heritage in the African-American culture. It is observed from December 26 to January 1, culminating in a feast and gift-giving. Kwanzaa has seven core principles (Nguzo Saba) and was created by American Black Power activist and secular humanist Maulana Karenga in 1966.

Maulana Karenga, also known as Ronald McKinley Everett, created Kwanzaa as a specifically African-American holiday in a spirit comparable to Juneteenth. According to Karenga, the name Kwanzaa derives from the Swahili phrase matunda ya kwanza, meaning “first fruits of the harvest”. A more conventional translation would simply be “first fruits”. The choice of Swahili, an East African language, reflects its status as a symbol of Pan-Africanism, especially in the 1960s, although most of the Atlantic slave trade that brought African people to America originated in West Africa. First fruits festivals exist in Southern Africa, celebrated in December/January with the southern solstice, and Karenga was partly inspired by an account he read of the Zulu festival Umkhosi Wokweshwama. It was decided to spell the holiday’s name with an additional “a” so that it would have a symbolic seven letters.

Kwanzaa is a celebration with its roots in the black nationalist movement of the 1960s. Karenga established it to help African Americans reconnect with their African cultural and historical heritage by uniting in meditation and study of African traditions and Nguzo Saba, the “seven principles of African Heritage”, which Karenga said “is a communitarian African philosophy”. For Karenga, a major figure in the Black Power movement of the 1960s and 1970s, the creation of such holidays also underscored an essential premise “you must have a cultural revolution before the violent revolution. The cultural revolution gives identity, purpose and direction.”

During the early years of Kwanzaa, Karenga said it was meant to be an alternative to Christmas. He believed Jesus was psychotic and Christianity was a “White” religion that Black people should shun. As Kwanzaa gained mainstream adherents, Karenga altered his position so practicing Christians would not be alienated, then stating in the 1997 Kwanzaa: A Celebration of Family, Community, and Culture, “Kwanzaa was not created to give people an alternative to their own religion or religious holiday.” Many African Americans who celebrate Kwanzaa do so in addition to observing Christmas.

Kwanzaa celebratory symbols include a mat (Mkeka) on which other symbols are placed: a Kinara (candle holder), Mishumaa Saba (seven candles), mazao (crops), Muhindi (corn), a Kikombe cha Umoja (unity cup) for commemorating and giving shukrani (thanks) to African Ancestors, and Zawadi (gifts). Supplemental representations include a Nguzo Saba poster, the black, red, and green bendera (flag), and African books and artworks — all to represent values and concepts reflective of African culture and contribution to community building and reinforcement. Corn is the primary symbol for both decoration and celebratory dining.

Families celebrating Kwanzaa decorate their households with objects of art, colorful African cloth such as kente, especially the wearing of kaftans by women, and fresh fruits that represent African idealism. It is customary to include children in Kwanzaa ceremonies and to give respect and gratitude to ancestors. Libations are shared, generally with a common chalice, Kikombe cha Umoja, passed around to all celebrants. Non-African Americans also celebrate Kwanzaa. The holiday greeting is “Joyous Kwanzaa”.

A Kwanzaa ceremony may include drumming and musical selections, libations, a reading of the African Pledge and the Principles of Blackness, reflection on the Pan-African colors, a discussion of the African principle of the day or a chapter in African history, a candle-lighting ritual, artistic performance, and, finally, a feast (karamu). The greeting for each day of Kwanzaa is Habari Gani? which is Swahili for “How are you?”

At first, observers of Kwanzaa avoided the mixing of the holiday or its symbols, values, and practice with other holidays, as doing so would violate the principle of kujichagulia (self-determination) and thus violate the integrity of the holiday, which is partially intended as a reclamation of important African values. Today, many African American families celebrate Kwanzaa along with Christmas and New Year’s. Frequently, both Christmas trees and kinaras, the traditional candle holder symbolic of African American roots, share space in Kwanzaa-celebrating households. For people who celebrate both holidays, Kwanzaa is an opportunity to incorporate elements of their particular ethnic heritage into holiday observances and celebrations of Christmas.

Cultural exhibitions include the Spirit of Kwanzaa, an annual celebration held at the John F. Kennedy Center for the Performing Arts featuring interpretive dance, African dance, song and poetry.

The National Retail Federation has sponsored a marketing survey on winter holidays since 2004, and in 2015 found that 1.9% of those polled planned to celebrate Kwanzaa — about six million people. In a 2006 speech, Maulana Karenga asserted that 28 million people celebrate Kwanzaa. He has always claimed it is celebrated all over the world. Lee D. Baker puts the number at 12 million. The African American Cultural Center claimed 30 million in 2009.

According to University of Minnesota Professor Keith Mayes, the author of Kwanzaa: Black Power and the Making of the African-American Holiday Tradition, the popularity within the U.S. has “leveled off” as the black power movement there has declined, and as of 2009 between 500 thousand and two million Americans celebrated Kwanzaa, or between one and five percent of African Americans. Mayes added that white institutions now celebrate it.

Starting in the 1990s, the holiday became increasingly commercialized, with the first Hallmark Card being sold in 1992, and there has been concern about this damaging the holiday’s values. The holiday also saw a greater public recognition as the first Kwanzaa stamp, designed by Synthia Saint James, was issued by the United States Postal Service on October 22, 1997 (Scott #3175), and in the same year Bill Clinton gave the first presidential declaration marking the holiday.

The holiday has also spread to Canada and is celebrated by Black Canadians in a similar fashion as in the United States. According to the Language Portal of Canada, “this fairly new tradition has [also] gained in popularity in France, Great Britain, Jamaica and Brazil”. In Brazil, in recent years the term Kwanzaa has been applied by a few institutions as a synonym for the festivities of the Black Awareness Day, commemorated on November 20 in honor of Zumbi dos Palmares, having little to do with the celebration as it was originally conceived.

Stjepan Meštrović, a sociology professor at the Texas A&M University, sees Kwanzaa as an example of postmodernism. According to Meštrović, post-modernists in modern society may view “real” traditions as racist, sexist or otherwise oppressive, but since living in a world where nothing is true is too terrifying to most people, “nice” and “synthetic” traditions like Kwanzaa have been created to cope with the nihilistic, individualistic modern society.

Scott #5337 was released by the United States Postal Service on October 10, 2018, in Raleigh, North Carolina. This is a Forever rate (50 cents on the date of issue) self-adhesive stamp celebrating Kwanzaa. The stamp depicts a small family adorned in a mixture of western and traditional clothing, paying tribute to the holiday’s focus on the contemporary African-American experience while also drawing on African roots. They are gathered around a kinara (candleholder), the warm light from the seven candles illuminating their faces. Several other important Kwanzaa symbols sit on the table. Artist Floyd Cooper used a method he calls “oil erasure” — covering an illustrated board in oil paint and then erasing layers of paint to reveal his images — to create this design of familial love and connection. Art director Derry Noyes designed the stamp.  It was printed by the Banknote Corporation of America using offset microprint in cyan, yellow, magenta, and black on the Alprinta 74 press in plates of 240 stamps per revolution. There were a total of 15,000,000 copies of the Kwanzaa stamp printed, issued in panes of 20. The USPS also sold uncut press sheets of 120 stamps. 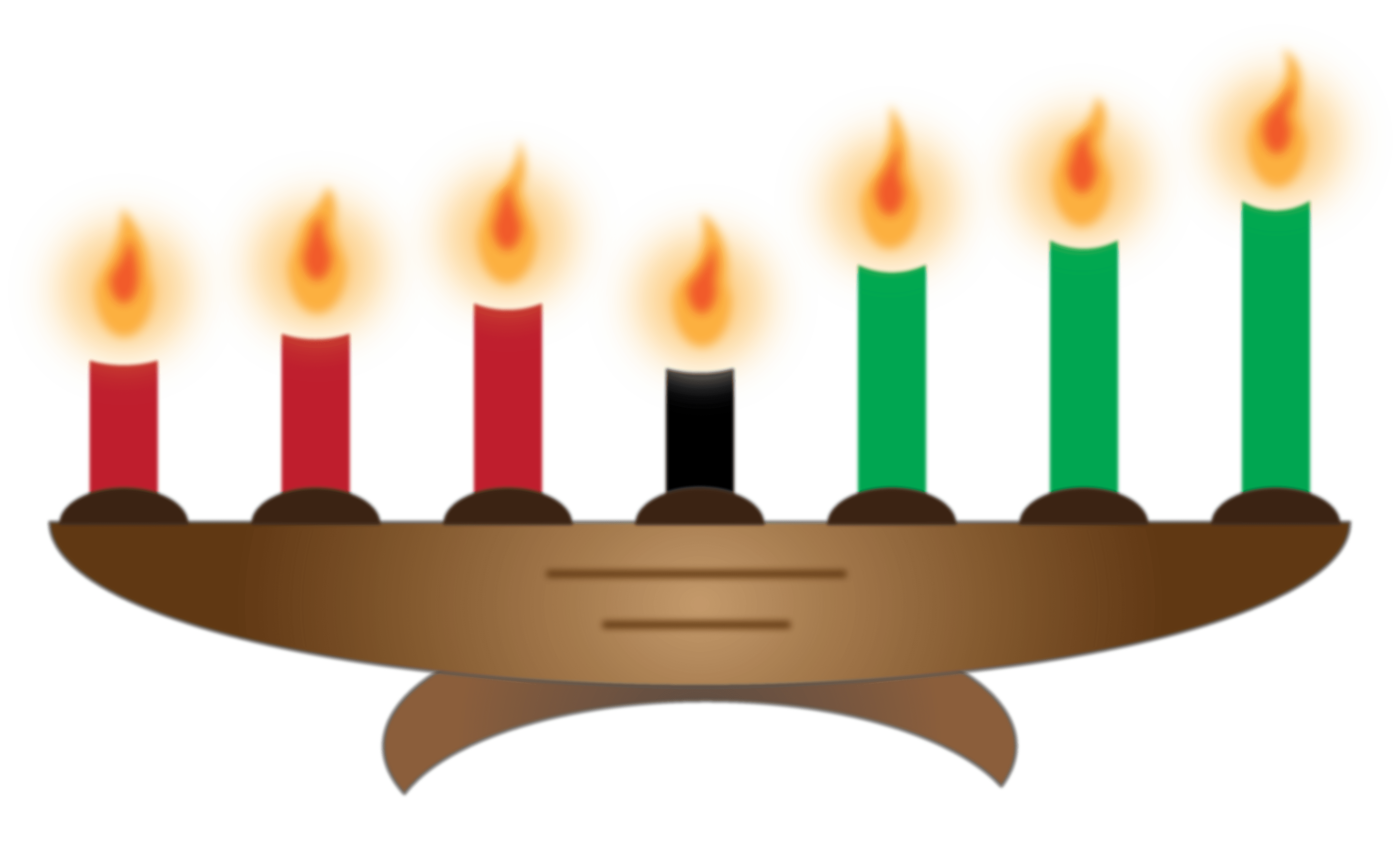