On January 5, 1938, Juan Carlos Alfonso Víctor María de Borbón y Borbón-Dos Sicilias — later Juan Carlos I, reigning as King of Spain from November 22, 1975, until his abdication on June 19, 2014 — was born to Infante Juan, Count of Barcelona, and Princess María Mercedes of Bourbon-Two Sicilies. He was born in Rome, Italy, where members of the Spanish royal family lived in exile following the abolition of the monarchy in 1931. He was given the name Juan Carlos after his father and maternal grandfather, Prince Carlos of Bourbon-Two Sicilies.

Juan Carlos is the grandson of Alfonso XIII, the last king of Spain before the abolition of the monarchy and the subsequent declaration of the Second Spanish Republic. Generalísimo Francisco Franco, the Spanish dictator who initiated the civil war by means of a coup d’état against the constitutional republic in 1936, took over the government of Spain after his victory in the Spanish Civil War in 1939. Juan Carlos’s early life was dictated largely by the political concerns of his father and General Franco.

In 1947, Spain’s status as a monarchy was affirmed and a law was passed allowing Franco to choose his successor. Juan Carlos’s father, Juan, was the fourth child of Alfonso, who had renounced his claims to the throne in January 1941. Juan was seen by Franco to be too liberal. Juan Carlos moved to Spain in 1948 to be educated there after his father persuaded Franco to allow it. He began his studies in San Sebastián and finished them in 1954 at the San Isidro Institute in Madrid. He then joined the army, doing his officer training from 1955 to 1957 at the Military Academy of Zaragoza.

Juan Carlos was married in Athens on May 14, 1962, to Princess Sophia of Greece and Denmark, daughter of King Paul of Greece, first in a Roman Catholic ceremony at the Church of St. Denis, followed by a Greek Orthodox ceremony at the Metropolitan Cathedral of Athens. She converted from her Greek Orthodox religion to Roman Catholicism. They have two daughters and one son: Elena (born December 20, 1963), Cristina (born June 13, 1965), and Felipe (born January 30, 1968). 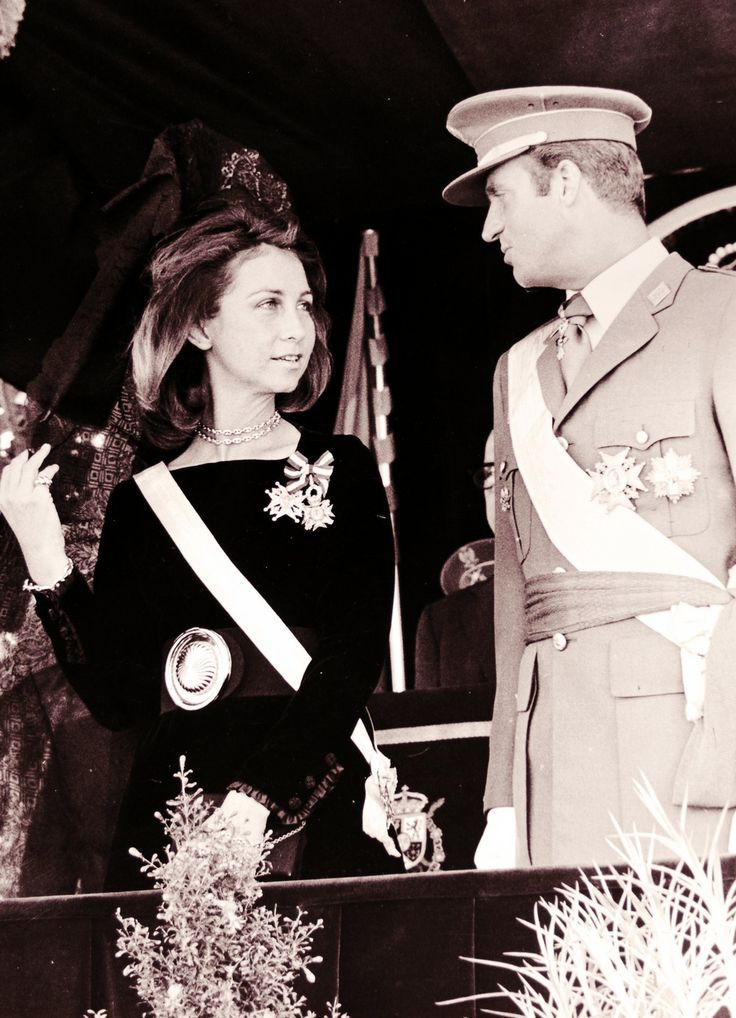 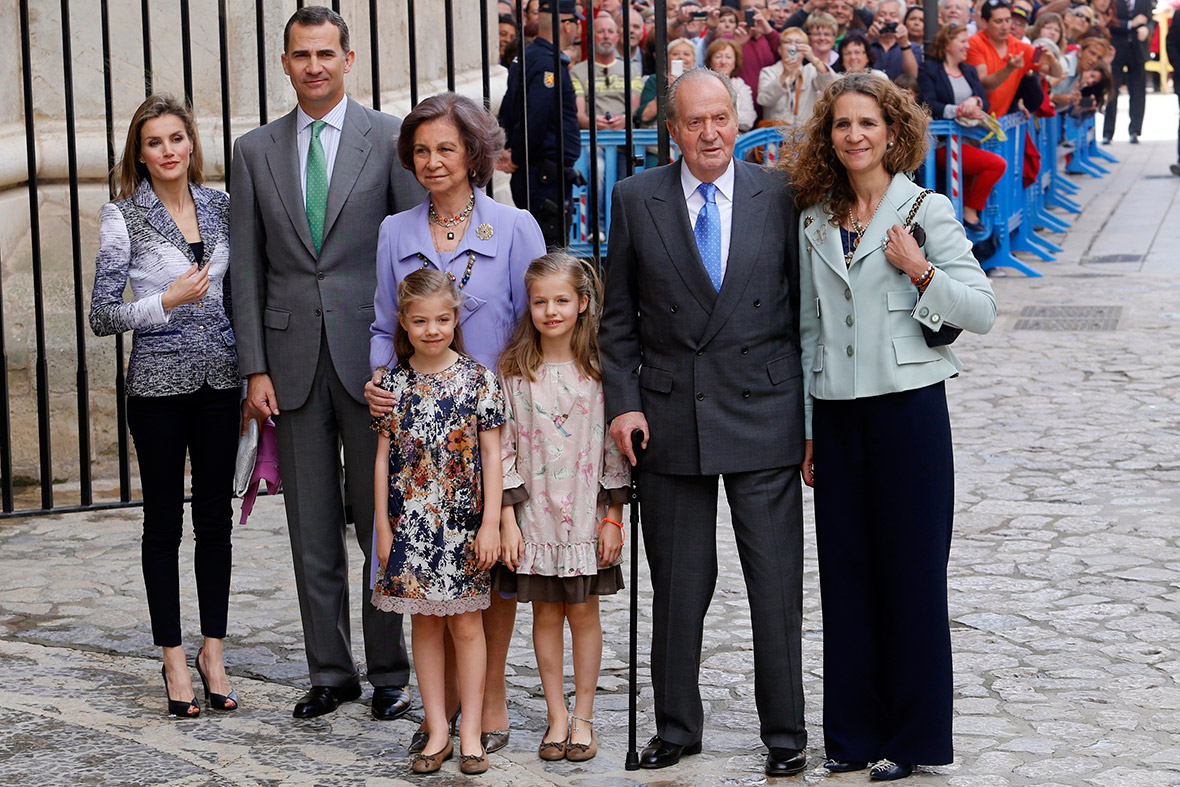 Franco’s authoritarian government remained dominant in Spain until the 1960s. With Franco’s increasing age, left-wing protests increased, while at the same time, the far right factions demanded the return of a hardline absolute monarchy. At the time, the heir to the throne of Spain was Juan Carlos’s father, Juan de Borbón. However, General Franco viewed him with extreme suspicion, believing him to be a liberal who was opposed to his regime. Juan Carlos’s first cousin Alfonso, Duke of Anjou and Cádiz was also briefly considered as a candidate. Alfonso was known to be an ardent Francoist and would marry Franco’s granddaughter, Doña María del Carmen Martínez-Bordiú y Franco in 1972.

Ultimately, Franco decided to skip a generation and name Juan de Borbón’s son, Prince Juan Carlos, as his personal successor. Franco hoped the young prince could be groomed to take over the nation while still maintaining the ultraconservative nature of his regime. In 1969, Juan Carlos was officially designated heir-apparent and was given the new title of Prince of Spain (not the traditional Prince of Asturias).[ As a condition of being named heir-apparent, he was required to swear loyalty to Franco’s Movimiento Nacional, which he did with little outward hesitation. His choice was ratified by the Spanish parliament on July 22, 1969.

Juan Carlos met and consulted Franco many times while heir apparent and often took part in official and ceremonial state functions, standing alongside the dictator, much to the anger of hardline republicans and more moderate liberals, who hoped that Franco’s death would bring in an era of reform. During 1969–1975, Juan Carlos publicly supported Franco’s regime. Although Franco’s health worsened during those years, whenever he did appear in public, from state dinners to military parades, it was in Juan Carlos’s company. Juan Carlos continued to praise Franco and his government for the economic growth and positive changes in Spain. However, as the years progressed, Juan Carlos began meeting secretly with political opposition leaders and exiles, who were fighting to bring liberal reform to the country. He also had secret conversations with his father over the telephone. Franco, for his part, remained largely oblivious to the prince’s actions and denied allegations from his ministers and advisors that Juan Carlos was in any way disloyal to his vision of the regime.

During periods of Franco’s temporary incapacity in 1974 and 1975, Juan Carlos was acting head of state. On October 30, 1975, Franco gave full control to Juan Carlos; he died three weeks later, on November 20. On November 22, the Cortes Generales proclaimed Juan Carlos King of Spain. In his address to the Cortes, Juan Carlos spoke of three factors: historical tradition, national laws, and the will of the people, and in so doing referred to a process dating back to the Civil War of 1936–1939. On November 27, a Mass of the Holy Spirit was celebrated in the church of San Jerónimo el Real in Madrid to inaugurate his reign. He opted not to call himself Juan III or Carlos V, but Juan Carlos I. Juan Carlos is reported to have been pressured by Valéry Giscard d’Estaing to personally tell Chilean dictator Augusto Pinochet, who had traveled to Spain for Franco’s funeral, not to attend his coronation.

Juan Carlos’s accession met with relatively little parliamentary opposition. Some members of the Movimiento Nacional voted against recognizing him, and more against the 1976 Law for Political Reform. Most Movimiento members supported both measures. Juan Carlos quickly instituted reforms, to the great displeasure of Falangist and conservative (monarchist) elements, especially in the military, who had expected him to maintain the authoritarian state. In July 1976, Juan Carlos dismissed prime minister Carlos Arias Navarro, who had been attempting to continue Francoist policies in the face of the king’s attempts at democratization. He instead appointed Adolfo Suárez, a former leader of the Movimiento Nacional, as prime minister, who would go on to win the following year’s election and become the first democratically elected leader of the new regime.

Further legitimacy was restored to Juan Carlos’s position on May 14, 1977, when his father (whom many monarchists had recognized as the legitimate, exiled King of Spain during the Franco era) formally renounced his claim to the throne and recognized his son as the sole head of the Spanish Royal House, transferring to him the historical heritage of the Spanish monarchy, thus making Juan Carlos both de facto and de jure king in the eyes of the traditional monarchists.

On May 20, 1977, the leader of the only recently legalized Spanish Socialist Workers’ Party (PSOE), Felipe González, accompanied by Javier Solana, visited Juan Carlos in the Zarzuela Palace. The event represented a key endorsement of the monarchy from Spain’s political left, who had been historically republican. Left-wing support for the monarchy grew when the Communist Party of Spain was legalized shortly thereafter, a move Juan Carlos had pressed for, despite enormous right-wing military opposition at that time, during the Cold War.

On June 15, 1977, Spain held its first post-Franco democratic elections. In 1978, the government promulgated a new constitution that acknowledged Juan Carlos as rightful heir of the Spanish dynasty and king; specifically, Title II, Section 57 asserted Juan Carlos’s right to the throne of Spain by dynastic succession in the Bourbon tradition, as “the legitimate heir of the historic dynasty” rather than as the designated successor of Franco. The Constitution was passed by the democratically elected Constituent Cortes, ratified by the people in a referendum on December 6 and then signed into law by the King before a solemn meeting of the Cortes. This re-established a constitutional monarchy.

On February 23, 1981, Juan Carlos played a major role in preventing a coup that attempted to revert Spain to Francoist government in the King’s name. When Juan Carlos became king, Communist leader Santiago Carrillo nicknamed him Juan Carlos the Brief, predicting that the monarchy would soon be swept away with the other remnants of the Franco era. After the collapse of the attempted coup, however, in an emotional statement, Carrillo remarked: “Today, we are all monarchists.” Public support for the monarchy among democrats and leftists before 1981 had been limited; following the king’s handling of the coup it increased significantly.

In 2008, Juan Carlos was considered the most popular leader in all Ibero-America. Hailed for his role in Spain’s transition to democracy, the King and the monarchy’s reputation began to suffer after controversies surrounding his family arose, exacerbated by an elephant-hunting trip he undertook in Botswana during a time of financial crisis in Spain. He also hunts bears; in October 2004, he angered environmental activists by killing nine bears, one of which was a pregnant female, in central Romania. It was alleged by the Russian regional authorities that in August 2006 Juan Carlos shot a drunken tame bear (Mitrofan the Bear) during a private hunting trip to Russia; the Office of the Spanish Monarchy denied this claim.

Spanish news media speculated about the King’s future in early 2014, following criticism and family scandal; the King’s chief of staff in a briefing denied that the ‘abdication option’ was being considered. On the morning of June 2, 2014, Prime Minister Mariano Rajoy made a televised announcement that the King had told him of his intention to abdicate. Later, the King delivered a televised address and announced that he would abdicate the throne in favor of the Prince of Asturias. Royal officials described the King’s choice as a personal decision which he had been contemplating since his 76th birthday at the start of the year. The King reportedly said, “[I] don’t want my son to grow old waiting like Prince Charles.”

As required by the Spanish constitution, any abdication would be settled by means of an organic law. A draft law was passed with 299 in favor, 19 against and 23 abstaining. On June 18, Juan Carlos I signed the organic law passed by parliament several hours before his abdication took effect. Felipe was enthroned on June 19, 2014, and Juan Carlos’s granddaughter Leonor became the new Princess of Asturias.

The Spanish constitution at the time of the abdication did not grant an abdicated monarch the legal immunity of a head of state, but the government was planning to make changes to allow this. Legislation has been passed, although unlike his previous immunity, the new legislation does not completely shield the former sovereign. Juan Carlos must answer to the supreme court, in a similar type of protection afforded to many high-ranking civil servants and politicians in Spain. The legislation stipulates that all outstanding legal mPtiatters relating to the former king be suspended and passed “immediately” to the supreme court.