The conquest of Mecca (فتح مكة‎ — fatḥ makkah) refers to the event when Mecca was conquered by Muslims led by Muhammad on a date generally accepted as 18 Ramadan 8 AH or January 10, 630 AD, when converted to the Julian calendar. In 628, the Meccan tribe of Quraysh and the Muslim community in Medina had signed a 10-year truce called the Treaty of Hudaybiyyah. In 630, this truce was broken when the Banu Bakr, allies of the Quraysh, attacked the Banu Khuza’a, who had recently become allies of the Muslims.

According to the terms of the Treaty of Hudaybiyyah, the Arab tribes were given the option of joining either of the sides, the Muslims or Quraysh. Should any of these tribes face aggression, the party to which it was allied would have the right to retaliate. As a consequence, Banu Bakr joined Quraysh, and Khuza’ah joined the Muslims. They thus lived in peace for some time; but ulterior motives stretching back to the pre-Islamic period, ignited by unabated fire of revenge, triggered fresh hostilities. Banu Bakr, without concern for the provisions of the treaty, attacked Banu Khuza’a in a place called Al-Wateer in Sha’ban, in 8 AH. Quraysh helped Banu Bakr with men and arms, taking advantage of the dark night. Pressed by their enemies, the tribesmen of Khuza’ah sought the Holy Sanctuary, but here too, their lives were not spared, and, contrary to all accepted traditions, Nawfal, the chief of Banu Bakr, chased them in the sanctified area — where no blood should be shed — and massacred his adversaries. Khuza’ah at once sent a delegation to Medina to inform Muhammad, of this breach of truce and to seek help from Muslims of Medina being their allies.

After the incident, Quraysh sent a delegation to Muhammad, petitioning to maintain the treaty with the Muslims and offering material compensation. The Muslim forces had gathered in strength to settle account with Quraysh and for the final attack and the opening of Mecca. After Abu Sufyan ibn Harb’s departure, Muhammad immediately assembled a large army. The objective of the operation was kept secret and even Muhammad’s close friends and commanders did not know his plans. Muhammad intended to assemble and attack the Quraysh using the element of surprise. For further secrecy, Muhammad sent Abu Qatadah towards “Batan Izm” to give the impression that he wanted to go there.

The Muslim army set out for Mecca on Wednesday, November 29, 629 (6 Ramadan, 8 AH). Volunteers and contingents from allied tribes joined the Muslim army on the way swelling its size to about 10,000 strong. This was the largest Muslim force ever assembled as of that time. The army stayed at Marr-uz-Zahran, located ten miles northwest of Mecca. Muhammad ordered every man to light a fire so as to make the Meccans overestimate the size of the army.

Meanwhile, Abu Sufyan ibn Harb travelled back and forth between Muhammad and Mecca, still trying to reach a settlement in order to avoid conquest. According to the sources, he found assistance in Muhammad’s uncle Al-Abbas, though some scholars consider that historians writing under the rule of Abbas’ descendants, the Abbasid Dynasty, had exaggerated Abbas’ role and downplayed the role of Abu Sufyan, who was the ancestor of the Abbaside’s enemies.

Mecca lies in the Valley of Ibrahim, surrounded by black rugged hills reaching heights of 1,000 feet (300 meters) at some places. There were four entry routes through passes in the hills. These were from the north-west, the south-west, the south, and the north-east. Muhammad divided the Muslim army into four columns: one to advance through each pass. The main column in which Muhammad was present was commanded by Abu Ubaidah ibn al-Jarrah. It was tasked to enter Mecca through the main Madina route, from the north-west near Azakhir. Muhammad’s cousin Az Zubayr commanded the second column and it would enter Mecca from the south-west, through a pass west of Kuda hill. The column entering from the south through Kudai was under the leadership of Muhammad’s cousin Ali. The last column under Khalid ibn al-Walid was tasked to enter from the north-east, through Khandama and Lait.

Their tactic was to advance simultaneously from all sides targeting a single central objective. This would lead to the dispersion of enemy forces and prevent their concentration on any one front. Another important reason for this tactic was that even if one or two of the attacking columns faced stiff resistance and became unable to break through, then the attack could continue from other flanks. This would also prevent any of the Quraysh from escaping.

Muhammad emphasized on refraining from fighting unless Quraysh attacked. The Muslim army entered Mecca on Monday, January 10, 630 (18 Ramadan 8 hijrah). The entry was peaceful and bloodless entry on three sectors except for that of Khalid’s column. The hardened anti-Muslims like Ikrimah and Sufwan gathered a band of Quraysh fighters and faced Khalid’s column. The Quraysh attacked the Muslims with swords and bows, and the Muslims charged the Quraysh’s positions. After a short skirmish the Quraysh gave ground after losing twelve men. Muslim losses were two warriors.

On the eve of the opening, Abu Sufyan adopted Islam. When asked by Muhammad, he conceded that the Meccan gods had proved powerless and that there was indeed “no god but God”, the first part of the Islamic confession of faith. In turn, Muhammad declared Abu Sufyan’s house a sanctuary because he was the present chief, and that all the others were gathered over his territory, therefore:

God has made Mecca a sanctuary since the day He created the Heavens and the Earth, and it will remain a sanctuary by virtue of the sanctity God has bestowed on it until the Day of Resurrection. It (fighting in it) was not made lawful to anyone before me. Nor will it be made lawful to anyone after me, and it was not made lawful for me except for a short period of time. Its animals (that can be hunted) should not be chased, nor should its trees be cut, nor its vegetation or grass uprooted, nor its Luqata (most things) picked up except by one who makes a public announcement about it.’

Then, along with his companions Muhammad visited the Kaaba. The idols were broken and their gods were destroyed. Thereupon Muhammad recited the following verse from the Quran:”Say, the Truth has come and falsehood gone. Verily falsehood is bound to vanish.” (17:81)

The people assembled at the Kaaba, and Muhammad delivered the following address:

“There is no god but God. He has no associate. He has made good His promise that He held to his bondman and helped him and defeated all the confederates. Bear in mind that every claim of privilege, whether that of blood or property is abolished except that of the custody of the Ka’aba and of supplying water to the pilgrims. Bear in mind that for any one who is slain the blood money is a hundred camels. People of Quraysh, surely God has abolished from you all pride of the time of ignorance and all pride in your ancestry, because all men are descended from Adam, and Adam was made of clay.”

Then Muhammad turning to the people said:

“O Quraysh, what do you think of the treatment that I should accord you?”

The people said, “Mercy, O Prophet of God. We expect nothing but good from you,” After which Muhammad declared, “I speak to you in the same words as Yūsuf spoke to his brothers. This day there is no reproof against you; Go your way, for you are free.” Muhammad’s prestige grew after the surrender of the Meccans. Emissaries from all over Arabia came to Medina to accept him.

Ten people were ordered to be killed: Ikrimah ibn Abi-Jahl, Abdullah ibn Saad ibn Abi Sarh, Habbar bin Aswad, Miqyas Subabah Laythi, Huwairath bin Nuqayd, Abdullah Hilal and four women who had been guilty of murder or other offences or had sparked off the war and disrupted the peace.

However, they were not all killed; Ikrimah lived to adopt Islam and fight in future battles among Muslim ranks. Of the two singing girls who were outlawed by Mohammad, one was slain but the other spared because she converted to Islam. Ibn Abi Sarh had been granted protection under Uthman ibn Affan and when he initially refused to take the mandatory oath of allegiance to Muhammad, the bystanders still did not kill him, due to misunderstanding the edict of Mohammad.

The opening of Mecca was followed by the Battle of Hunayn.

A single stamp was released by the postal administration of the Union of the Comoros (Udzima wa Komori in Comorian, Union des Comores in French and الاتحاد القمري‎ — al-Ittiḥād al-Qumurī / Qamarī in Arabic) on March 12, 1980, to commemorate the 1350th anniversary of the occupation of Mecca by Muhammad. Michel #605 is denominated 75 Comorian francs and perforated 13 x 12½.

The Comoros is an island country in the Indian Ocean located at the northern end of the Mozambique Channel off the eastern coast of Africa between northeastern Mozambique, the French region of Mayotte and northwestern Madagascar. The capital and largest city in Comoros is Moroni. The religion of the majority of the population is Sunni Islam.

At 640 square miles (1,660 km², excluding the contested island of Mayotte, the Comoros is the third-smallest African nation by area. The population, excluding Mayotte, is estimated at 795,601 As a nation formed at a crossroads of different civilizations, the archipelago is noted for its diverse culture and history. The archipelago was first inhabited by Bantu speakers who came from East Africa, supplemented by Arab and Austronesian immigration.

The sovereign state is an archipelago consisting of three major islands and numerous smaller islands, all in the volcanic Comoro Islands. The major islands are commonly known by their French names: northwestern-most Grande Comore (Ngazidja); Mohéli (Mwali); and Anjouan (Nzwani). In addition, the country has a claim on a fourth major island, southeastern-most Mayotte (Maore), though Mayotte voted against independence from France in 1974, has never been administered by an independent Comoros government, and continues to be administered by France (currently as an overseas department). France has vetoed United Nations Security Council resolutions that would affirm Comorian sovereignty over the island. In addition, Mayotte became an overseas department and a region of France in 2011 following a referendum passed overwhelmingly.

It became part of the French colonial empire in the end of 19th century before becoming independent in 1975. Since declaring independence, the country has experienced more than 20 coups d’état or attempted coups, with various heads of state assassinated. Along with this constant political instability, the population of the Comoros lives with the worst income inequality of any nation, with a Gini coefficient over 60%, while also ranking in the worst quartile on the Human Development Index. As of 2008 about half the population lived below the international poverty line of US$1.25 a day.

The French insular region of Mayotte, which is the much prosperous territory in the Mozambique Channel, is the major destination for Comorian illegal migrants who flee their country. The Comoros is a member state of the African Union, Francophonie, Organisation of Islamic Cooperation, Arab League (of which it is the southernmost state, being the only member state of the Arab League with a tropical climate and also entirely within the Southern Hemisphere) and the Indian Ocean Commission. Other countries near the Comoros are Tanzania to the northwest and the Seychelles to the northeast. Its capital is Moroni, on Grande Comore. The Union of the Comoros has three official languages — Comorian, Arabic and French. 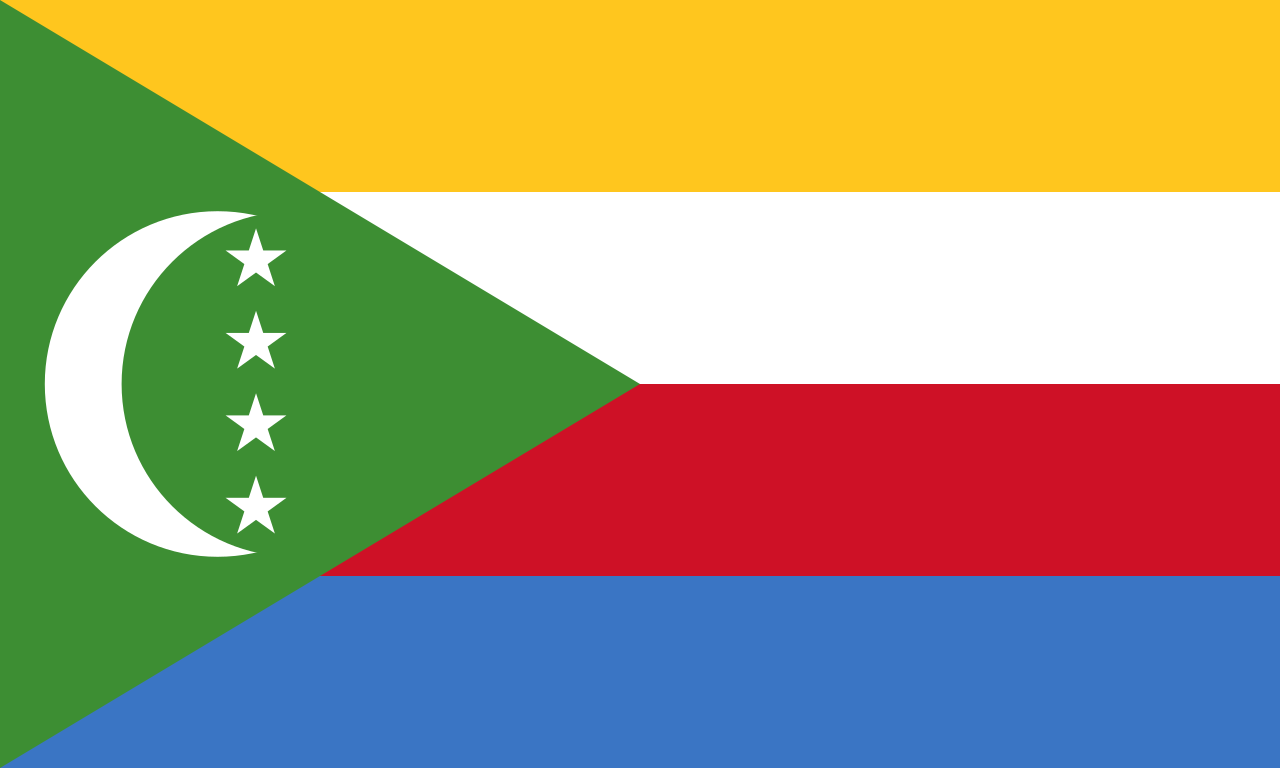 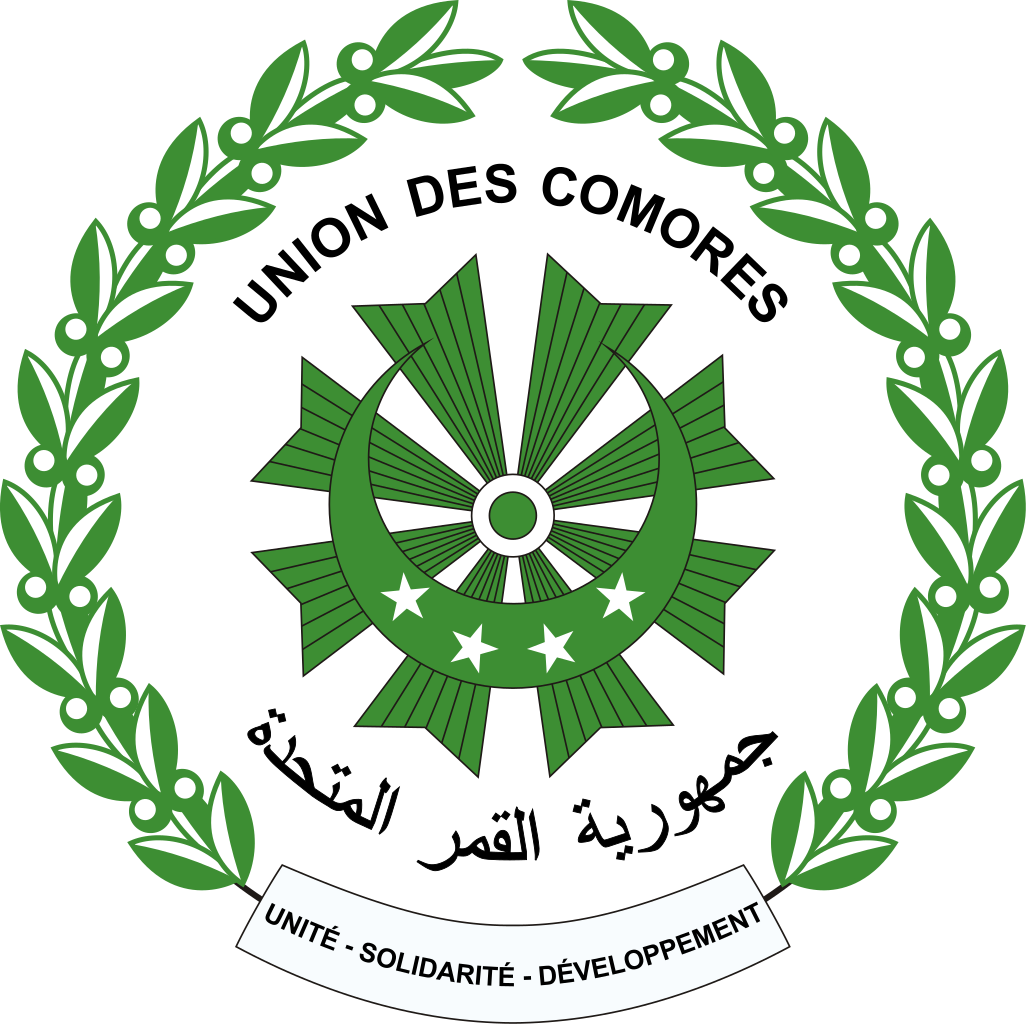